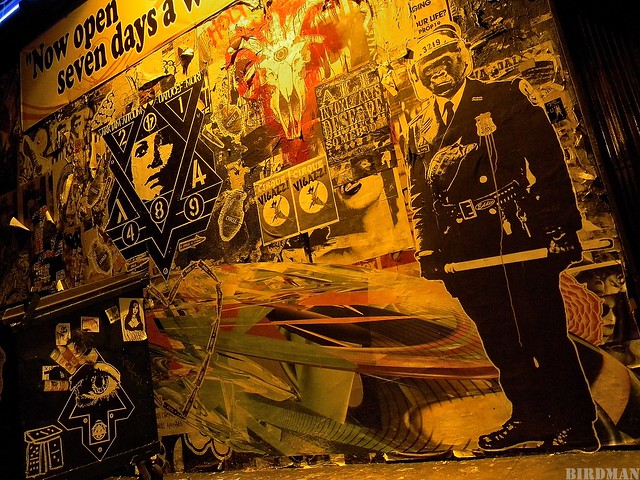 As SF street artist Eddie Colla was gearing up for the recent “Sniffin’ Glue Art Show” he decorated the streets of Downtown Los Angeles and Hollywood with some of his beautiful and controversial posters. I was lucky enough to show him and co-conspirator D Young V (showing soon at White Walls) some areas in town to paste, it was quite the honor to do that as these are two of my favorite street artists. At the end of his show I asked Eddie a few questions regarding his imagery. His messages were a lot deeper then most the street art I have seen and I just had pick his brain on the matter. I had a chat with him discussing his art in the show as well as in the street. Enjoy! – Birdman

This gorilla officer character you have, is he symbolizing our police system or a bad run in with you and the authorities one time or another?

The Gorilla Cop is all about police brutality. I put that image on a shirt and on the back it said “the force of example, the example of force” Those are 2 way different ways to lead. Don’t get me wrong, I don’t hate cops. There are some however that are straight up thugs and need to be held accountable. I’ve had my run-ins with police and for the most part they’ve all been civil. If you do a little research you’ll see that brutality cases happen all the time. We have better recourse at this point because of the video and pictures people take and still it’s damn near impossible to get a conviction. I did this piece called “no more excuses” (here) Which is just a partial list of unarmed people who’ve either been killed or seriously injured by the police. I also live about 3/4 of a mile from where Oscar Grant was Killed, so it’s something that happens right here. 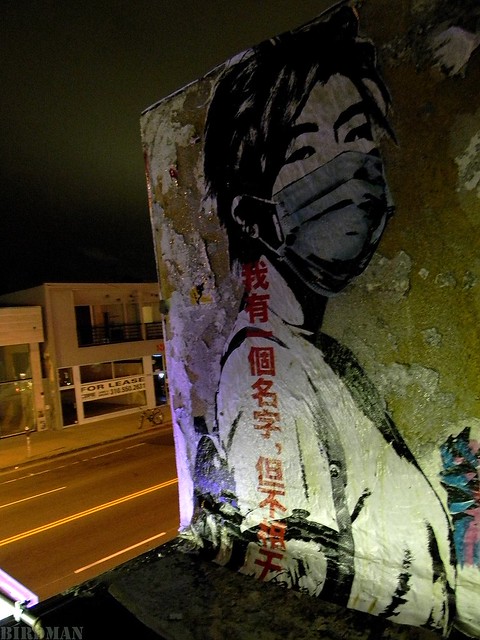 Who exactly is this girl? (above) Why her?

She’s just a girl. She sells goldfish in Mong Kok, Hong Kong. She has a very compromised immune system for a number of reasons. As a result the most serious threat to her is other people and the environment. There are a lot of people in Hong Kong so it’s a tricky existence. It’s a cautionary tale.

What language is that and what does it translate to?

It’s Chinese. Usually it says “I have a name, but that doesn’t matter” Sometimes there is a second part that says “this is my life”

When you do your posters, are they from online images or do you take the photos yourself?

I take as much myself as possible. All of the bike girl images are my images and all of the backgrounds (Hong Kong) are mine. Obviously I don’t always have access to things and then I have to resort to appropriating images. Like the Gorilla or Sarah Palin. 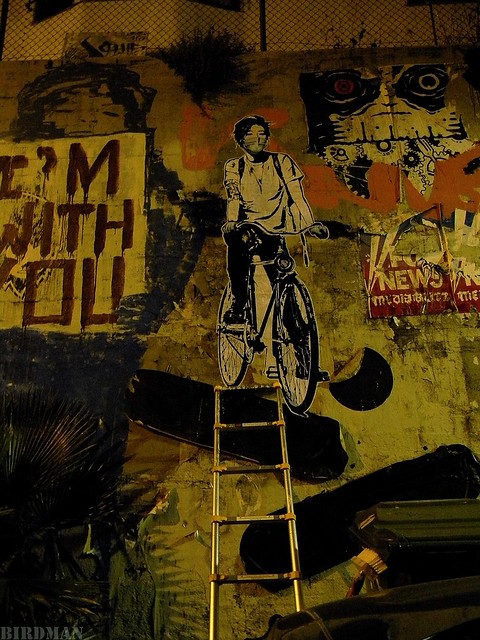 Why does she have a bicycle and backpack? Is she running away from something?

Well, if you had a compromised immune system you’d probably stay away from public transit as much as possible, so she rides a bike. The back pack is just a back pack. In a city as large as Hong Kong with that sort of condition you are always kinda running from something. She’s also always alone. 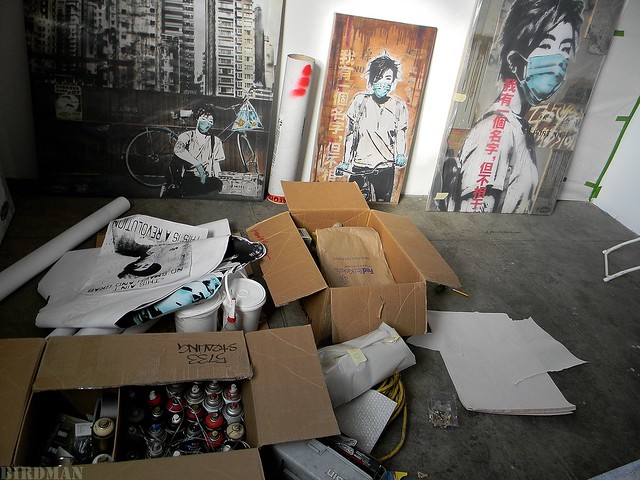 Do you try to recapture the street feel or do you have to alter the message a bit when asked to put your work from the streets to the gallery. 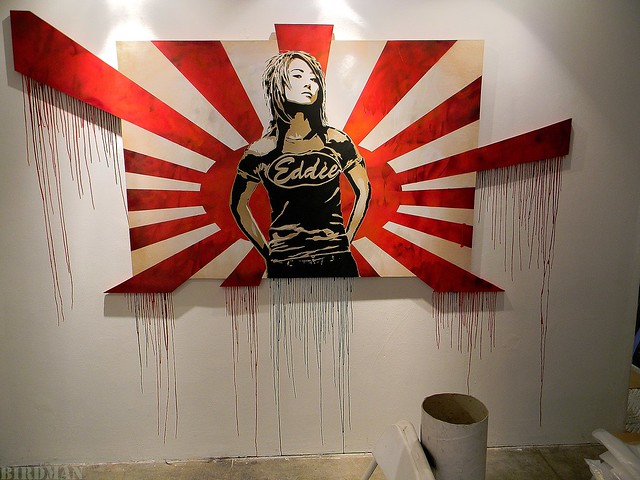 Here your piece changes to a 3D like image. Would you recreate this in the streets? Or is it a recreation of whats on the streets?

Having the art bringing in its surroundings in order to convey its message. Actually that’s still pretty much 2d These are more 3D (here). If more about depth and perspective than Streets vs Gallery. I try to bring some elements of decay and weathering into some pieces, but that’s more because galleries are so fucking sterile. 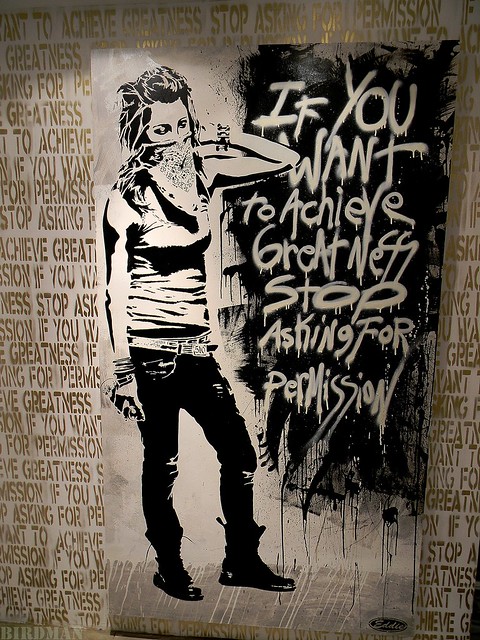 This is a simple statement that means so much. Who was your model here and who inspired the mixture of stencil/tag combinations.

The model is a friend of mine, a lot of the people in my pieces are my friends. Not sure how to answer the second part. It’s just really simple sloppy text.Ya, I guess it is quite self explanatory. I was over thinking it 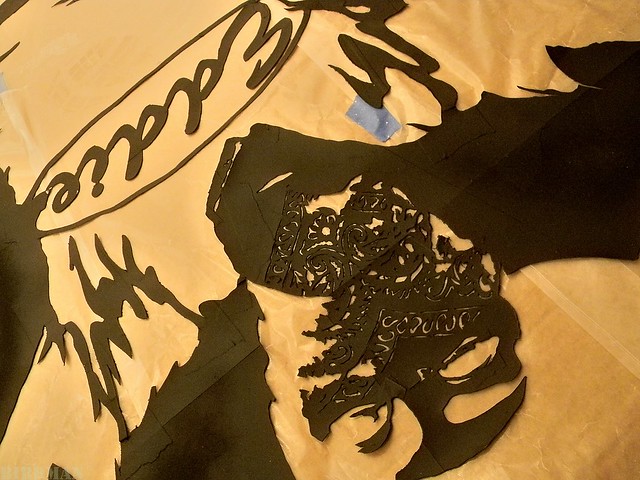 Your stencils are very detailed, who is your inspiration for your stenciling?

I was a commercial photographer for a long time, coming from that background I see my stencils as very very simple versions of images. I use to make stencils back in the 80s before I knew how to take photographs. When I was like 13-17 I used to work for a company that painted lines in parking lots. We used stencils all day. To number parking spaces and for handicap parking, do not enter, directional arrows etc. That was my first introduction to stencils. I thought it would be cool to do something that wasn’t utilitarian. 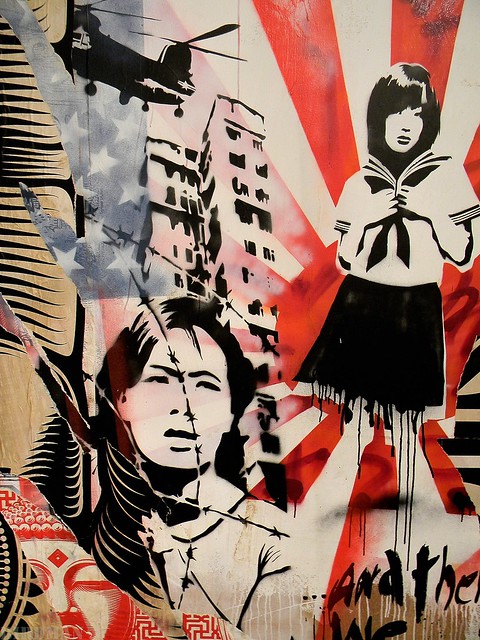 This is one of my favorites at the show, what is going on here?

The main image there is Black April. The fall of Saigon, the helicopter taking off and the crowds gathering trying to find a way out of Vietnam. The text underneath said …and then we leave. It’s just about the U.S. foreign policy. How we go around the world getting involved, altering the history of things, for better or worse and often we make a huge mess… and then we leave. When it no longer benefits us or we realize we’ve made a huge mistake. All the things we’ve set in motion, the chain of events, they all continue, with or without us. 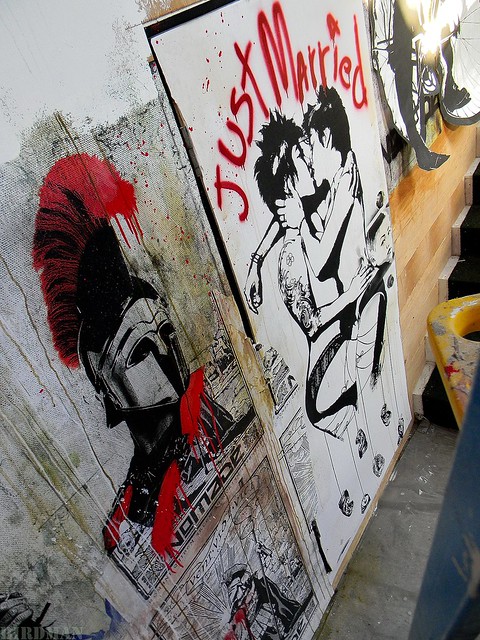 This just married piece of yours seems like an obvious message towards gay marriage, but what is not seen in between the lines? When did you make this?

I made this in June of 2008 just after the ban on same-sex marriage had been lifted in California. So initially it was a celebratory piece. That quickly changed in Nov. of 2008. It then became a protest piece. The idea that the rights of a minority group can be held to a majority vote is about the most ass-backwards thing I have ever seen. Proposition 8 in unconstitutional by any measure. This will all be resolved eventually and I have no doubt that the ban on same-sex marriage will be lifted soon and for the last time. In the meantime we get to watch the last of a group of dinosaurs writhe and roar in the face of their extinction.