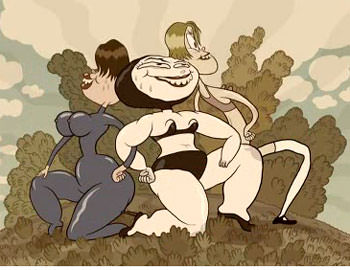 We just got word of a new Dave Cooper animated video for Canadian rock band Danko Jones. Nick Cross, an award-winning animator, teamed up with Cooper to make this drum-pounding latex-headed bounce fest sing. Oddly perverse and frantic like a Clampett cartoon, we’ve got a special sampling of story board drawings to show you and an interview with Cooper on the project. So check out the video and more here! 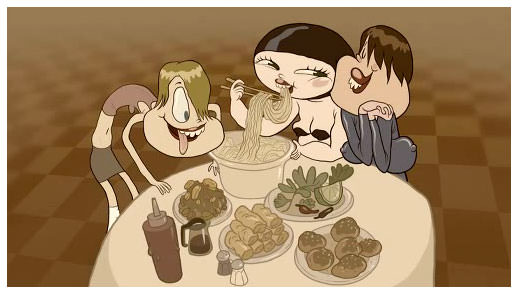 HF: Which one is Mimi Wobbly? Is it the girl whose under-dressed for ANY reasonable situation?

Dave: Yeah, the one with the latex headpiece. she’s kind of a cross between my wife Julie and this local model friend, Émilie. she was going to play Mimi in the live action version!

HF: The weather seems overcast yet it seems very cold out if you know what I mean…

Dave: It’s very exciting for them, what can i tell you? 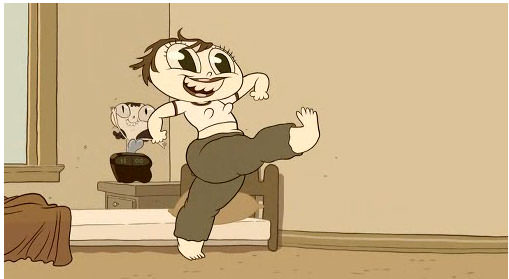 HF: How long have you known Danko Jones?

Dave: I’ve been a fan of their music for quite a while they’re sort of an institution in canada. very big in europe too, just haven’t cracked the us market yet. anyway, I sent them a fan email a couple of years ago, saying that i wanted to send them all my books. JC, the bassist got back to me to thank me for all the swag and said that they really loved my work. So i wrote in passing, almost as a joke, “You should get me to do a video for you guys, even though i’ve never done one in my life.” he seemed receptive. The rest is a pretty long story, but basically they offered me the third single off their new album and i wrote up a treatment for a live action video. big, beautiful models, custom made latex outfits, tons of pretty extras, a custom built rocket car, sets, locations, props, camera men, a producer, etc etc. Needless to say the budget was a little steep. so the label put the kybosh on that. I was bummed, but then a few months later, I decided to re-pitch the same treatment but fully animated by one of my favourite animators, Nick Cross- for a third the budget. in the end, the label, the distributor and the band themselves all pitched in and got us the budget. Suddenly i was faced with a 6-wk turnaround time! unheard of. so i started making the storyboard sketches. Each day i’d bring the days work over to my animator friend, Nick and go over them with him, describing how i wanted things to go. he’d get cracking and i’d come over again the next day. after the first week, my part was done and Nick was in for a very long, hard 5 wks. All this during a time when Nick was putting together his very first tv pilot for canada’s Teletoon! he was a wreck. man, animators are hard workers. Make’s me feel like a total slacker! 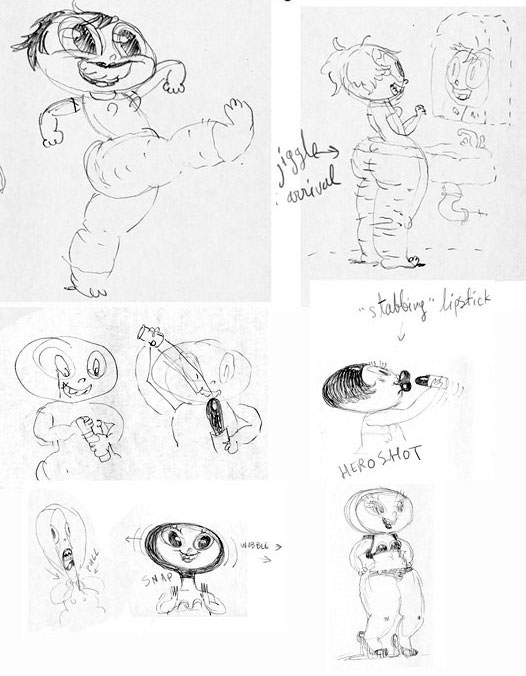 HF: Who is this Nick Cross guy?

Dave: Nick is a brilliant, award-winning animator who lives here in ottawa. I’ve known him for about a decade, he’s a good friend. I’ve always wanted to work with him, and in fact this isn’t the first time i’ve tried to coordinate something with the two of us. but it’s the first time anything’s actually come to fruition. i’ve been such a fan and admirer of his for so long, I’m glad this finally came to pass. I feel like nick and i understand each others work really well. there were so many times during animation that he’d nail something i’d described so perfectly, or even improve on it. He made things jiggle and sway that i never even asked to jiggle and sway. it was a great time. 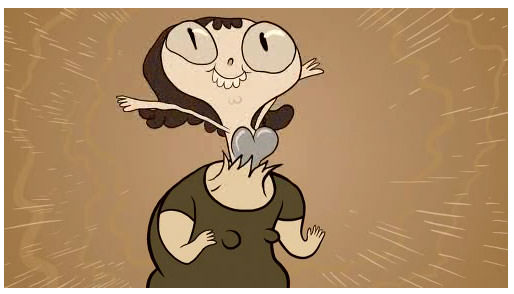 HF: Everything is so wobbly, even their car!

Dave: It’s that pounding Danko rhythm, man! That’s just the way it is up here in the great white north. 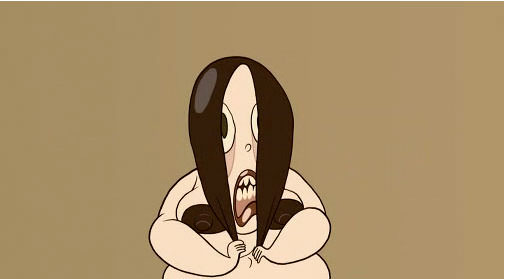 HF: That lipstick action was kind of,,, uhm stimulating.

Dave: That was the first thing that came to me in my mind’s eyes, and it basically set the mood for everything else.

HF: Are the girls lunch-special outlaws? They make eating a full contact sport…

Dave: They just do everything the EXTREEME, DUDE!!!