Fascinating people tend to beget fascinating people, and such is the case for beloved artist and entrepreneur Attaboy. As one for whom spending countless hours on the creative binge entails, idle hands remain in short supply around his workshop. Lately he’s been deep in the creative currents bringing a new body of work to life, called “A Touch Of Evil,” which debuts at POVevolving Gallery in Los Angeles’ mystical Chinatown on June 13th, as well as fulfilling his five-year dream of plush goodness, The Gooberry. But despite his amazingly stacked schedule of running a magazine, pursuing his love of toy design, creating both fine art and digital wonders and teaching active young minds in the ways of the artist-wanderer… he still finds time for us to probe his mind a bit and see just what makes him tick.  Follow us in and imbibe of the fountain of twisted joy of all that is Attaboy… 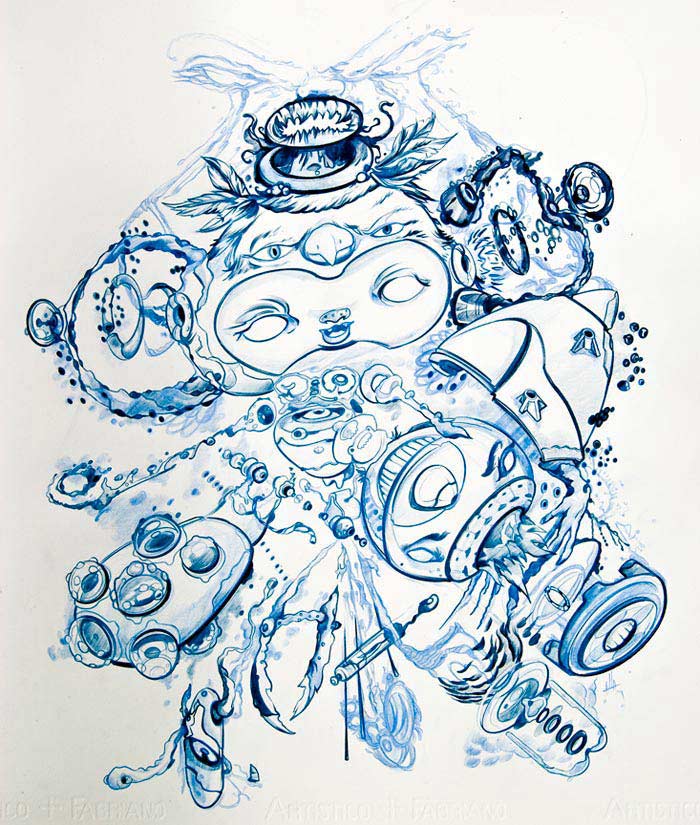 So Atta, who are you and where are you from?

I’m from the womb. Like everyone else. After birth, (mmmmm), I grew up in Florida and New York, mostly New York. My real name is Daniel Seifert (there! now the not-secret is out), but if you said “Hey Daniel, there’s a truck about to hit you…” I’d probably be dead.You can call me Atta, it’s less stupid for all of us. 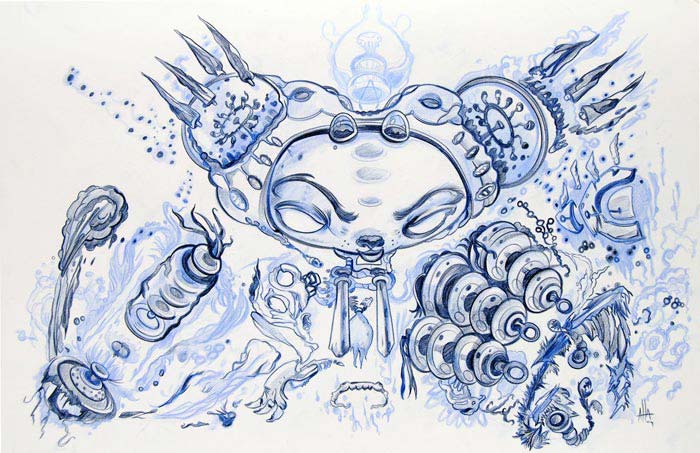 What was it like as a kid, did Mr. and Mrs. Boy encourage your art habits? By the way I’ve had your uncle’s cigars, the Itsa Boy. It’s been forever since I’ve smoked bubble gum.

My dad was completely different than myself (he was a big hulking truck driver) and was forever encouraging, even though art type stuff wasn’t his bag.His main interest was raising three boys (two from previous situations) like his own, because we were. He turned our entire garage into a complete Star Wars diorama. My mother and I, like similar people, fought all the time. But now we get along real nice. She’s an Energizer bunny of insane creative impulses and last year she voyaged down the Amazon to build houses for orphans. She made award-winning Halloween costumes for us. Nearly every year we’d come home with bicycles. At Christmas, our decorations had decorations of their own, really. It literally took her 2 months to decorate. One Christmas, we had so many decorations that we had to move the gathering to my little brother’s bachelor pad. My Grandma was a ceramicist and my 86 year old grandpaw is a mentalist/magician. He is, in my opinion, a performance artist always on the scene. I grew up in a funny family. As far as uncles, there’s nothing like smoking bubble gum around babies in hospitals!

Did you have any special training or art school to get you on the way?

I went to the Fashion Institute of Technology and gradu-macated from their toy design program. It was the hardest thing I’ve ever had to do.Boot camp for fun is hard work.

When you approach new work, where do you begin? 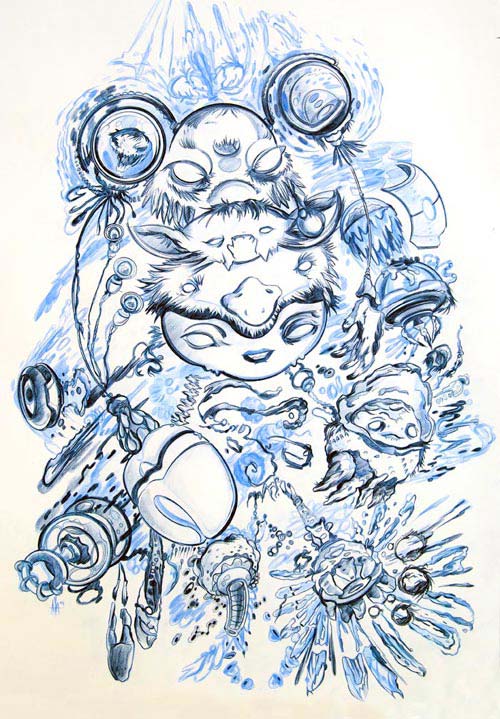 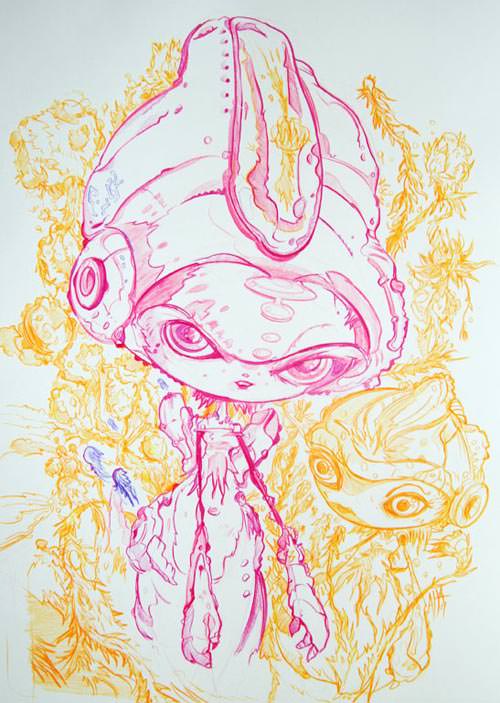 Let’s be honest here, there’s a bit of departure from your recent work. What facilitated the change and do you feel like this is a new vein of work for you to pursue further?

Theme-wise, it seems i’m exploring the “future,” for my upcoming show, “A Touch of Evil.” at the POV Evolving Gallery in LA. If dinosaurs were meant to create oil, I think we humans are here to create plastic. And i think plastic is forever, like the need for religion… or even various plastic religions. What will our angels look like in the future? The angels depicted by ye ol’ masters of the past were depicted in their garb and context, so what about angels of my plasticized future? Will these angels wear helmets? Will their legs wither from 100’s of years of un-use flying around all the time? Those wings, surely jetpaks would be better! right? 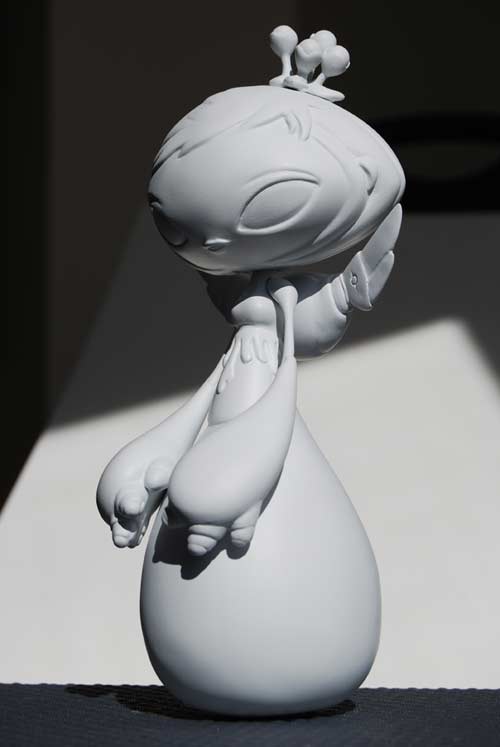 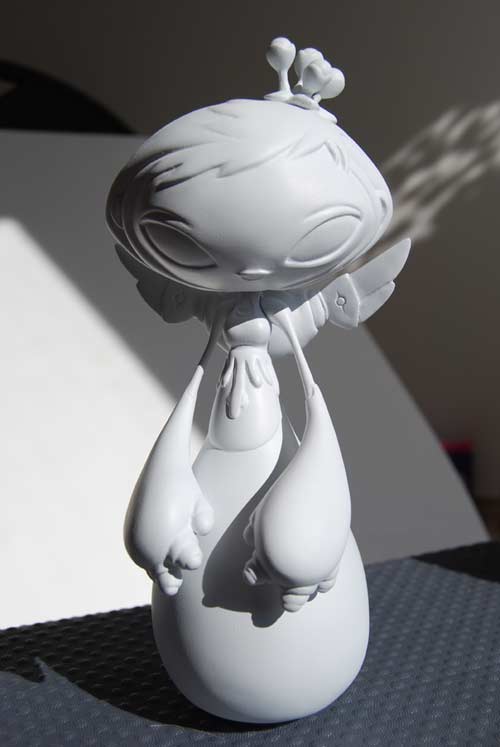 The Winged Shmee sculpture prototype premiering at “A Touch of Evil” opening at POVEvolving Gallery, June 13th.
The future, like our present, will be  part advanced, part regressed, dismantled. Exploded views, spare parts, unexpected explosions, glass and plastic, and oddly some religious themes are sneaking in.  A messed up future doesn’t mean it’s a dystopian one tho, there’s ups and downs even in the darkest state, the darks just seem darker, making the lights stand out more, so to speak. 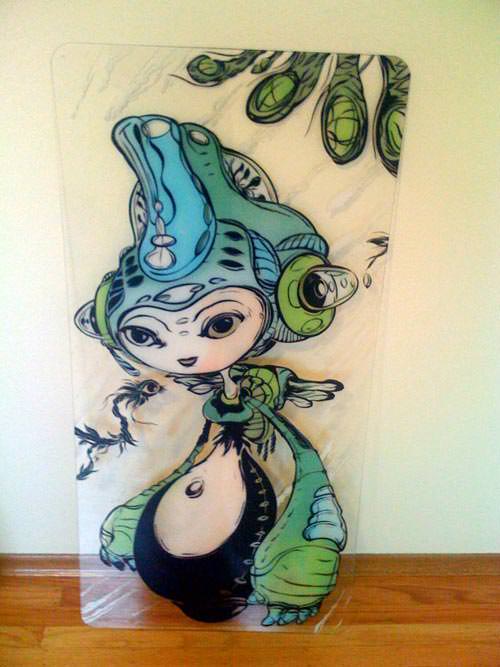 I’ll be presenting a series of the new drawings and new stencils on plastic pieces which project shadows nicely and we’re premiering the Winged Shmee sculpture and new Gelaskins.  And J.Shea is doing a fantastic sculpture based on my previous Brine Queens. I say based on, because there’s no way to contain his awesome approach. Any sculpture he does is a J. Shea original – even if using my drawings as the starting point. I’m honored to have the piece in the A Touch of Evil show.

The plastic pieces are actually fun to make. And you want archival? There’s nothing like Plastic with spray varnish to withstand the test of time.I’m making art for the damn cockroaches and robo lung brained jelly pop humans to enjoy 600 years from now.

Also, We will install a Gooberry Patch in the back room, where you can pick your unripened talking Gooberry Plush and take one home to abuse. After 5 years of waiting, they’ve finally arrived, and they’re still not ripe. Music in the Gooberry Patch will be by toy piano mash-up genius Twink (http://www.twink.net/index.html)

Do you find time to read or get into music, if so what’s on your bookshelf and playlist? 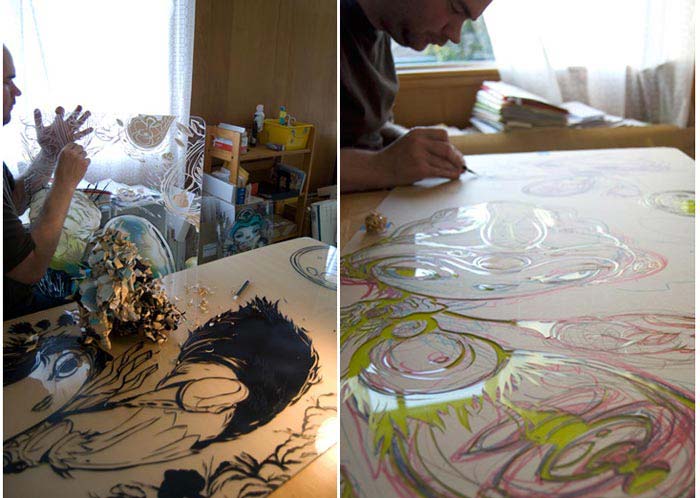 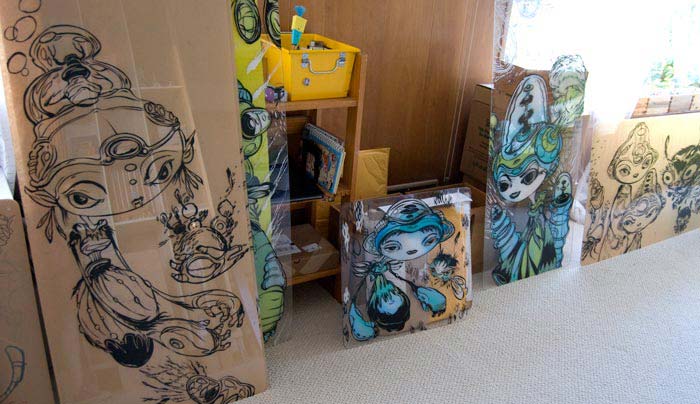 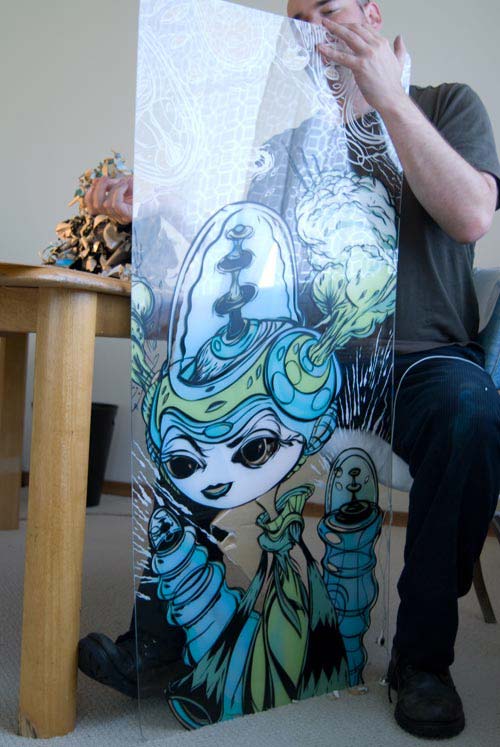 “***”
While preparing some layouts for vol.11 of Hi-Fructose I would ping-pong back and forth from monitor to the drawing board with a color pencil tucked behind each ear. I pretended I had an alter ego named Kenji Kokamoto, who didn’t make magazines, whose hands were stubs burned in a rave fire in Tokyo in the 90’s. Late one night I even created a Myspace page for Kenjii. Some days, Kenji was a girl who w ore long diva gloves which eventually soaked in the blood from the not yet healed portions of her flambe wound, drawing cute out-of-context characters that her young cousin would like. Other times Kenji was a boy, not caring about anything he drew, confident and assured, like a deodorant commercial.

Aside from creating art, what else fills your time up in Northern California?

We just moved into a new house/headquarters. So everything feels different, like when you eat something after tooth paste, most times minty-pancakes, sometimes minty-orange juice. I started to prune the tree pods outside with clippers like an Edward Penishands Mr. Miaggi. It hurts. My hands are too flaccid. I like to go to the Cerrito Theatre with Annie where they serve food to you while sitting on their couches while watching anything. They show sun faded cartoons before the movie with no commercials and real popcorn. I think secretly I want to own a Vaudeville Theatre now that I’ve went through the trouble of spell checking “Vaudeville.” The time is high for that. People are tired of multiplexed entertainment.  Charlie Chaplain would silently puke on the sticky floors if he saw what United Artists has become. If we were to meet up somewhere cool, or see something interesting in your neighborhood, where might we end up?

The Albany Bulb sculpture park.:
http://www.youtube.com/watch?v=ZMWjoNbq4SY
Annie, Donut, and I moved two miles away now, so we’re still discovering the nooks and crannies. I must say if you drive by Home Depot in a U-Haul truck in the morning, you’re instantly famous! All the Day Laborers do the Wave!

How do you think your surroundings affect your work, or you as an artist?

It’s more about the current in the air and blood/sugar levels I think. That and the constant encouragement form Annie gets me through the rough spots. 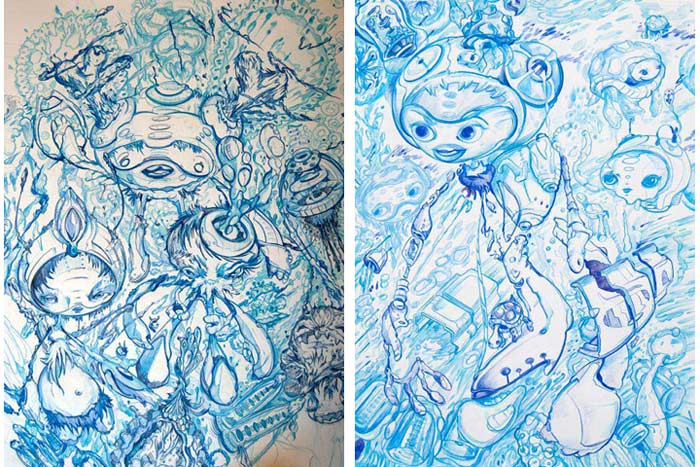 I’m stupid happy in the morning, bouncing around mentally, so it’s the best time to draw , think of new things,surprised I made it through the night. By 3 pm, I get a bit surly, especially if the mail hasn’t arrived. I love the mail.By around 7pm I pretty much hate everything I’ve made all day.

Growing up, was there a defining moment that made you realize you would be or were an artist?

When my face blossomed into an acne pizza and ruined my child modeling career, I retreated into the basement to stare at Cosmopolitan magazinesand draw the Clinique advertisements like I was Patrick Nagel.

Back to your work, what is it that drives you to bring such creative and colorful things to life?

I like the colors of sun-faded toy boxes, the Magentas and RGB-ness. The colors of a rusted cruise ship… Aqua, Peach, Magenta, Corrosive Brown and Pale Indigo. We’re completely surrounded by packaging. Boxes of things are more frequent than trees now adays. I’m not saying that’s a good thing. It just is.

Is there an end result or universe that you are working toward, or do you find the work appearing on its own?

It appears when I’m couragous enough to follow it. A few years back, my work was pretty popular but I wasn’t learning anything, so I got a bit bored.I’ve been surprising myself lately. So I think I’m going to see it through to the other side.

Not much time to read, but I’ll listen to audio books when driving or doing layouts. Stuff like John Hodgeman and Steve Martin. Music wise, it all depends on if i’m sleepy or not and under deadline. I like to listen to Magnetic Fields, Rancid, the Andrew Sisters, Bouncing Souls, Spike Jones, Gogol Bordelo, They Might Be Giants,Pain, Portishead, and when driving, when tired: SKA. I just popped in an Eric B. and Rakim CD yesterday. I forgot how awesome they were.I caught a sweaty towel form Erik B. at their first Madison Square Garden show as a kid. It smelled like coconut. Someday perhaps I will sweat coconut flavored sweat and have lazer beams shoot out of the eyes of the rotating sculpted heads on either sides of me while I unwax unpoetic about how I “Ain’t No Joke” and how my silent friend Eric B. should be president.Who knows!

What are some of the things you enjoy when not making art or working, assuming there’s any time for that?

Our dog Donut and going to the Cerrito theatre with Annie. Reading love letters to my dog that my Grandpaw sends us from his own made up dog Dunkin. Other than that, not doing anything is the best reward.

As someone with an inside track on certain artistic endeavors, what advice might you give to the artists out there working toward building an art career – what should the new crowd NOT do?

They shouldn’t find time to make business cards. Be known for your work. Not the promotion of your work. Keep pushing and changing, even when successful. Also, don’t get dissapointed if you work a day gig. I’ve been untethered for the past ten years but  if you need to work an actual job, you can keep your art unfiltered, uncompromised, your own.  Don’t start an art magazine. Don’t listen to people who don’t listen. Stop using the word “Don’t.”Stop. Talking. AND Verb, mother fucker, verb all over the place, you stupid, stupid brilliant fucking genius.

For questions about the work please contact the gallery