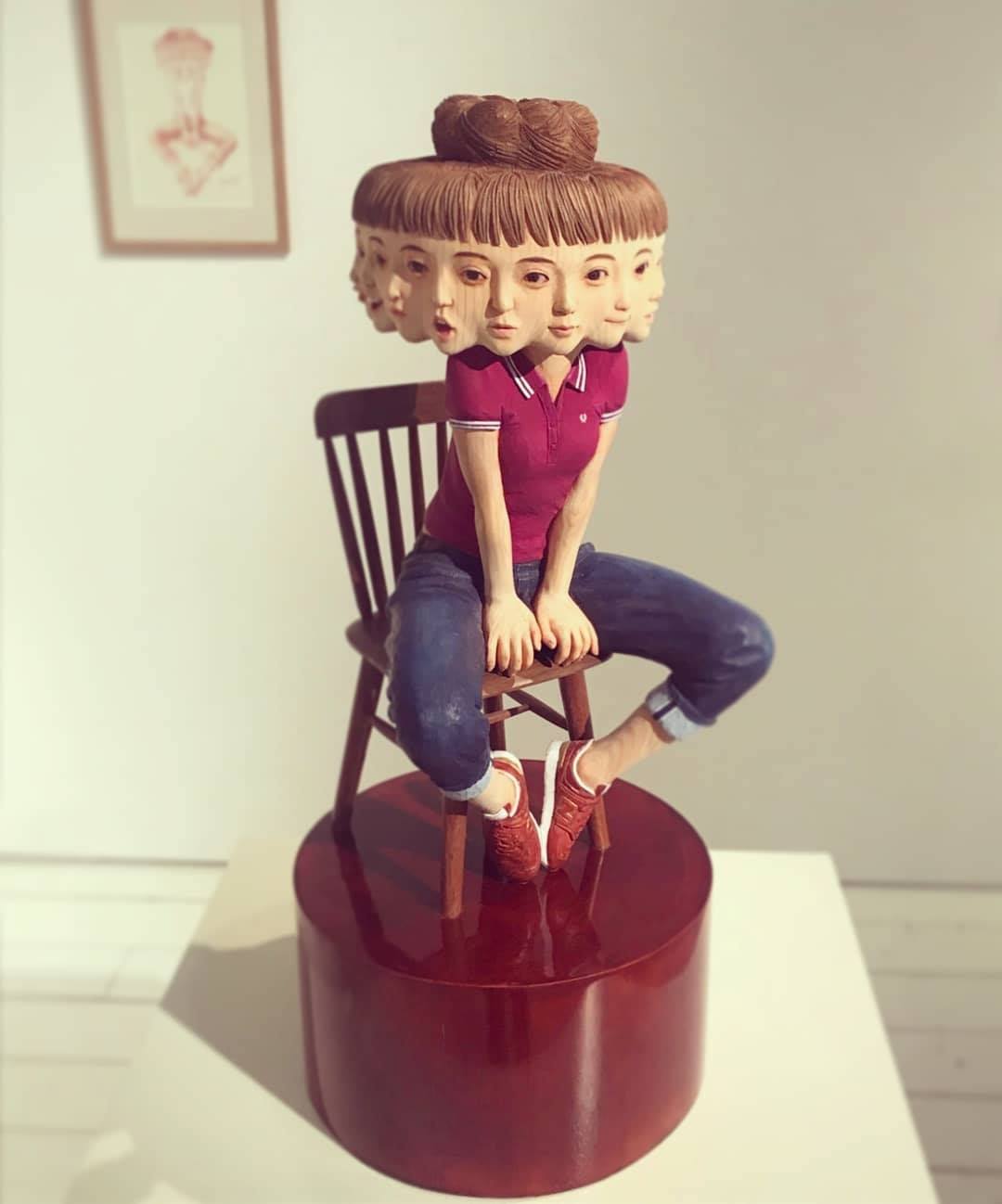 Yoshitoshi Kanemaki’s recent mindbending wooden sculptures carry cerebral and haunting vibes, each evolving in tone as the viewer observes from different perspectives. The artist was featured in Hi-Fructose Vol. 38 and he last appeared on HiFructose.com here.

The wooden sculptures of Kiko Miyares appear as distortions of the human figure, with viewers often circling the work in disbelief. While some of his work is horizontal, the majority of his work vertically transforms the body into a new, perception-challenging object. His toying with color further pushes the surrealism of each subject.

Constructed from driftwood, the figurative sculptures of Nagato Iwasaki appear as ancient beings wandering through forests or curious museum-dwellers. The Japanese artist’s talents in composing posture and grace creates an eerily humanistic quality in the works, set apart from the rigid figurative pieces of his contemporaries. Elsewhere, Iwasaki crafts incomplete bodies that, given the material used, seem as though they may be growing or returning to the earth.

Yasam Sasmazer, a Turkish artist who works in Berlin, crafts wooden sculptures the deal with psychological hardship and narratives. Series like “Metanoia” take influence from the work of psychiatrist Carl Jung, exploring the journey between mental breakdowns and the evolution that follows. Her use of three-dimensional figures and shadows, both simulated and real, offer an absorbing take on the duality of living.

In 2013, Chinese artist Zheng Chunhui made international headlines for using his craft to nab one of the Guinness World Records. With more than 40 feet of wood, Chunhui’s piece recreates the beloved “‘Along the River During the Qingming Festival,” a famous Chinese painting created during the Song dynasty by Zhang Zeduan, nearly 1,000 years ago. (The painting is so highly regarded, it’s often referred to as the Chinese “Mona Lisa.”) Included in the piece are the plants, domestic structures, bridges, and boats that comprise the piece. And let’s not forget 550 individually crafted individuals scattered throughout the scene.

The warped and surreal nature of Paul Kaptein’s sculptures are even more startling when you consider the medium: Kaptein hand-carves each piece from wood. And the “glitchy” aspect of the works is heightened by gaps and holes present throughout, in a sense emptying the figures of their worldliness. And with names like, “With the Poise of One Entering a Black Hole for the Third Time” (shown above), there’s both a humor and cosmic quality to the Australian artist’s work. Kaptein was last featured on HiFructose.com here.