Sometimes our crassest jokes reveal our hidden anxieties, while other times we create beautiful rituals surrounding that which we fear. It’s human nature to make light of death in order to not be consumed by the often incomprehensible idea of mortality. Examining a spectrum of responses to this difficult subject, Seattle gallery Roq La Rue recently collaborated with The Piranha Shop for a touring exhibition, “Boxes of Death.” Featuring well-known artists from the Pop Surrealist and low brow currents — like Camille Rose Garcia, Isabel Samaras and Casey Weldon — the show hit stops in LA, Portland and San Francisco and will be exhibited in Seattle for one night only at The Piranha Shop tomorrow, October 17.

Our next print issue of Hi-Fructose New Contemporary Art Magazine (which arrives in July) features a beautiful cover and feature and a beautifully-printed special 16-page insert by Travis Louie, we chase clouds with the murals and art of Sainer and the ETAM CRU, discover the animal portraits of Susan Siegel, Andy Gilmore’s hallucinatory graphics, Eric Wert’s intense still-lives, Shawn Huckins’s modern painted text messaging meets old masters mash-ups, painter Casey Weldon’s bright and bold surreal works, Mark Gmehling’s 3D distortions, and a major feature on the art of Sam Wolfe Connelly! Plus we journey into hell in with a new stereoscopic book review and take a look at Dima Drjuchin’s Lil Goof and more! Pre-order a copy today! See more sneak peeks of the issue after the jump.

For his new body of work for his solo show, “Cosmos,” coming up at WWA Gallery in Culver City, Julian Callos delved into primordial themes. Set at the dawn of creation, the paintings recall the tumultuous myths of Ancient Greek gods that preceded the Olympians, the Titans, with their personification of the forces of the universe. Callos says he explores the origin of the universe in his work as a metaphor for the formation of one’s personal identity. “Cosmos” opens October 12 and in the project room of WWA, there will be a group show, “Time Will Tell,” curated by Callos with work from the likes of Michael Ramstead, Jon MacNair, Ken Garduno (featured in our current issue), Casey Weldon and others. Take a look at our preview of the show after the jump.

Tomorrow, December 6, San Francisco’s Spoke Art will debut their second annual show, “The Moleskine Project II.” Co-curated by Rod Luff and Spoke Art founder Ken Harman, the show offers an intimate, stripped-down look into the artists’ creative processes. Whether they work with spray paint, oils or colored pencils, the artists bare themselves and reveal to us where it all begins — their sketchbooks. Marco Mazzoni (HF Vol. 20), Casey Weldon, Jessica Hess, Tatiana Juarez and Xiau-Fong Wee are among the wide array of exhibiting artists. Take a look at some preview images courtesy of Spoke Art after the jump.

It warms our hearts when artists team up for a good cause. Currently, the group show “Awakened” is on display at AFA Gallery in New York and will be on view until September 29. Curated by Alix Sloan of Sloan Fine Art, the exhibition features work from many of our favorite artists (like JennyBird Alcantara, Isabel Samaras, Casey Weldon, Scott Musgrove, Travis Louie and Ransom&Mitchell, to name a few) and part of the proceeds will go to Adopt-a-Pet, a non-profit that provides an online index of pets available for adoption. Take a look at some of our favorite works in the show below. 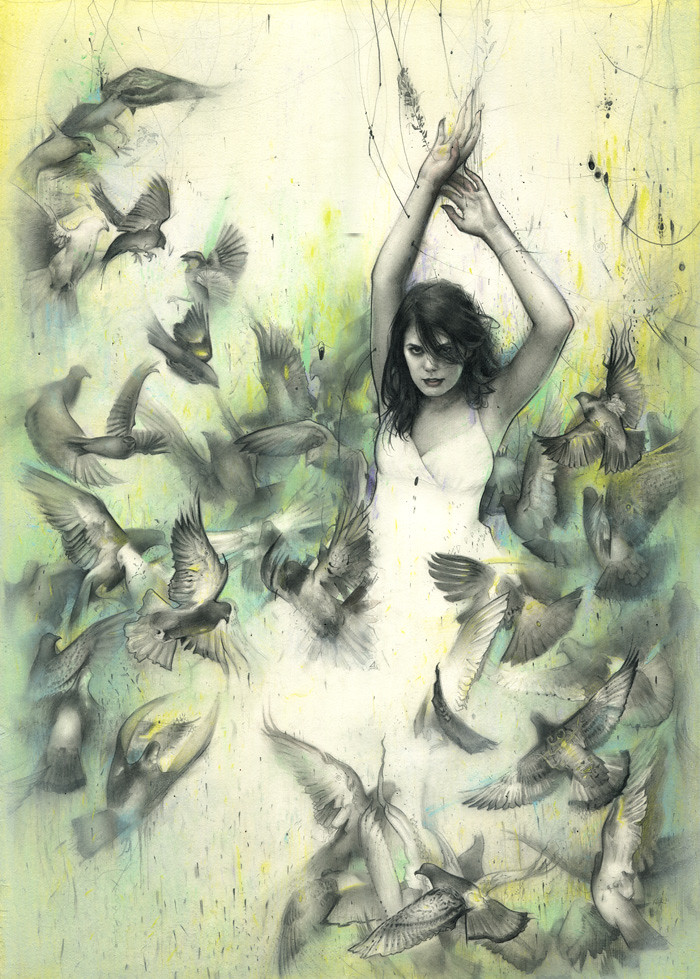 Hi-Fructose’s own Ken Harman recently opened a small gallery space of his own here in San Francisco, Spoke Art. On view this month is a preview exhibition highlighting the coming year’s selection of solo shows. Featuring works by Nimit Malavia, Rod Luff, Sam Wolfe Connelly, Handiedan, Serge Gay Jr., Casey Weldon, Jonas Lofgren, Ron Ulicny, and Tim Doyle, the coming year at Spoke looks to be a nice selection of emerging artists. Get a preview of the show after the jump.