Recently, the highly praised Os Gemeos exhibit entitled ‘Miss You’ concluded at Prism LA and Hi-Fructose dropped by the gallery to check out the new works in person. The Brazilian art duo’s first solo show with the gallery featured new large scale paintings and sculptures within an immersive installation that was like stepping into the minds of Os Gemeos. Read more after the jump! – Stephanie Chefas

A self-described art junkie, Andrew Hosner co-founded Thinkspace Gallery with his wife Shawn and their partner L. Croskey as a natural progression of his passion for the New Contemporary Art Scene in Los Angeles. Since its inception in 2005, Thinkspace has been one of the first galleries to give many of the artists who have graced the pages of Hi-Fructose — like Audrey Kawasaki, Stella Im Hultberg, Natalia Fabia, Kukula, Andrew Hem and more — major exhibitions that helped launch their careers. Andrew Hosner sat down with Hi-Fructose to discuss the origins of Thinkspace, his role as the gallery’s curator and his prodigious, private art collection. Read our conversation after the jump.

Elements from Brazilian folk culture like kites, air balloons and the traditional apparel are the inspiration for Brazilian street artist Raphael Sagarra aka Finok’s colorful body of work. The São Paulo based artist first entered the world of graffiti at a young age with the VLOK crew, which also included artists like Os Gêmeos and Nunca. In an email to Hi-Fructose, Finok explained that his new work is a reflection on “human positioning throughout life, and how we are always trying to see both sides of the coin in every situation”.

Since 2009, Urban Forms Gallery has been transforming the landscape of Polish city Lodz with a pulsing wave of colorful, graphic images. Puerto Rican muralist Alexis Diaz (previously covered by HF) is the latest in a string of internationally-known street artists including Brazil’s Os Gemeos, Belgium’s ROA, and Australia’s SHIDA, to have been invited to touch his brush to Poland’s walls. Diaz’s mural, entitled “Sentir,” is part of world-wide series, “HOY.” Translated to “Today,” Diaz’s current series is a personal reflection of the way in which the artist sees the world. Following murals in Vienna, France, the US, UK, Australia, and Tunisia, “Sentir,” which translates to “to feel,” is an affecting tribute to the ties between the natural world and human sensation.

Taking cue from street art’s global influence, Urban Forms in Lodz, Poland is turning their city into a large, outdoor urban art gallery. Founded in 2009, the main idea of this project was to change the city center by creating large-format artworks directly on the facades of buildings. This project has resulted in over 30 large murals scattered around the city by international and Polish artists, including works by Os Gemeos, Aryz, Etam Cru and Inti from past years. 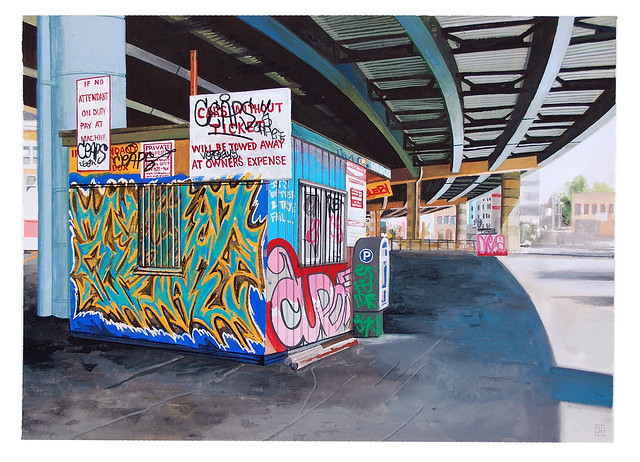 Taking on a meta dimension, Jessica Hess‘ landscape paintings are paintings of paintings as much as they are representations of urban spaces. Hess recreates graffitied buildings on the 2D surface of her canvas, redoing tags and murals on a micro scale. Her works create an interesting play on graffiti, as the original works she copies are inextricably tied to their relationship to their environment. Famous street artists Os Gemeos and local taggers such as the Bay Area’s prolific GATS make appearances in her latest landscapes, which will be shown in her solo show, “Fade and Finish,” opening at San Francisco’s Spoke Art on September 6.