Cleon Peterson’s stark, graphical reflections on our current political and social climate, rendered in acrylics on canvas and sculptures, are part of a show currently running at Over the Influence in Los Angeles. “Blood and Soil” collects his latest tableaux, confronting race, power, and religion. The show runs through Aug. 5 at the gallery. Peterson was last mentioned on HiFructose.com here.

Cleon Peterson portrays the brutal struggles between an army of warring figures in his monochromatic illustrations reminiscent of Grecian pottery. Previously featured on our blog here, the Los Angeles based painter and muralist juxtaposes a bold use of minimalism and clean lines with the chaos and violence that exists in today’s world. He is unafraid to show the ugly side of human nature, and yet Peterson chooses to see his work as more of a mirror, where looking at our own reflection can have the power to inspire change. Peterson celebrated his solo debut in Hong Kong last night with the opening of his pop-up solo exhibition, “Purity”, in cooperation with local arts organization, Over the Influence.

The brutal paintings of Cleon Peterson (covered here) have a visceral effect on the viewer, plunging them deeply into a world of chaos, ruin and violence. On August 29th, Peterson brings his iconic style to Detroit’s Library Street Collective for his latest exhibition, “Poison.” “The show is about revenge, which is a current of poison running through our culture and other cultures around the world.” Peterson shares. “It’s often a motivation for war and a justification for punishment. It is a social impulse that is destructive and easy to be complicit in.” Peterson is deliberate in his unflinching presentation of the darker side of human nature. In this world, muscle-headed brutes cross swords and knives, locked in a cycle of aggression.

Populated with monochromatic characters, Cleon Peterson’s artworks are reminiscent of Grecian urns with their flattened figures. At the core, Peterson’s graphic work is about oppression. Violent struggles are illustrated with a dose of melodrama, adding a dose of ridiculousness to the over-the-top violence. These abstract struggles don’t take place in any specific social milieu, inviting the viewers to question whether this is a battle of good and evil or whether such a battle truly exists. Peterson will open a solo show at The Outsiders in London titled “There is a War,” on view July 5 through August 3. Take a look at some of the artworks in the show after the jump. 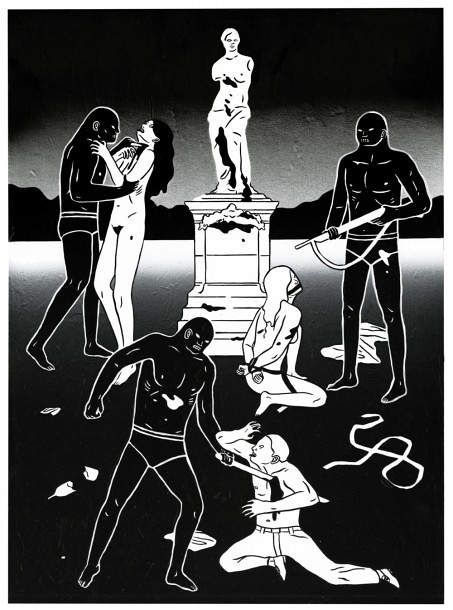 Cleon Peterson unveils another chapter in his ongoing anarchic world rife with violence and passion with his latest solo offering, “Daybreak”, now on view at New Image Art. While prior works mainly involved delicately rendered depictions of obscene and gratuitous violence, and though this theme continues with “Daybreak”, one of the things we’re even more so intrigued by here is the introduction of a new character(s), the “shadow” figures. Drawing upon Nietzche’s Daybreak: Reflections on Moral Prejudices as well as Jung’s theory of the “shadow aspect” of the psyche, “Daybreak” provides a reflective look that goes beyond rubbernecking to question ideas of morality and revolution.