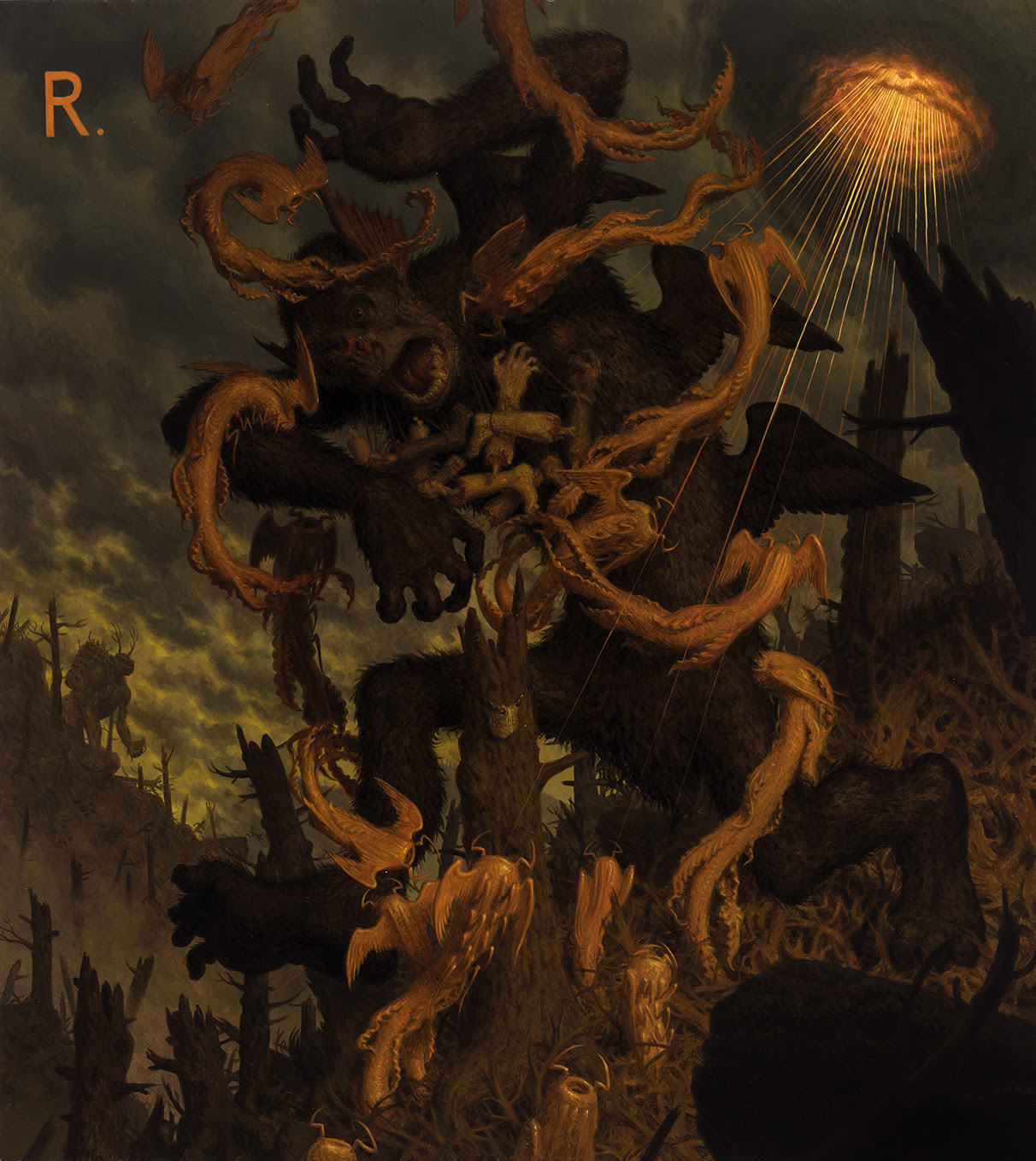 Painter Peter Ferguson returns to Roq La Rue Gallery with “Skip Forward When Held,” bringing his sensibility that blends notes of the Dutch Renaissance, Lovecraftian creatures, and more. The show, running through January 25 at the space, brings new oil paintings to the space. Ferguson was last featured on our site here.

We can only imagine what early explorers venturing off into the new world must have felt. Medieval maps and encyclopedic bestiaries give us some idea of the strange lands they expected to encounter, inhabited by mysterious figures and loathsome, fictitious beasts. Montreal, Canada based painter Peter Ferguson, previously featured here on our blog, seems to evoke this same combination of wonder, horror, excitement, and intrigue with a unique sense of bizarre humor in his artworks.

April is a big month for Seattle’s Roq La Rue Gallery, with three shows all opening tonight. In their main room, Peter Ferguson presents a new collection of rust-hued paintings set sometime in the 19th century for his solo show, “Prime Meridian.” In this series, anachronistic villagers and city dwellers encounter increasingly more surreal characters than previously seen in his past work. Monsters invade old-fashioned pubs, schools, and manors — perhaps pointing to the monstrosities of the colonial period, the real-world context his work can’t escape.

A dance between Victorian-era sensibilities and early science fiction, Peter Ferguson’s latest body of work takes the viewers through jovial narratives of maritime trials and triumphs. Set at the turn of the previous century, Ferguson’s textured, dimly-lit oil paintings for his upcoming show at Roq La Rue in Seattle, “Fire in the Map Room!,” offer glimpses into the lives of a cast of seafaring characters.

For his upcoming solo show at Roq La Rue in Seattle, Peter Ferguson created a series of warmly-hued paintings that harken back to the times of seafaring and colonialism. Richly textured and saturated with autumn colors, the artworks for “Black Jubilee” are at times humorous and at times sinister and supernatural. Mixing elements of history painting and science fiction, Ferguson renders distinctly stylized figures that appear to be haunted by an otherworldly, nautical presence. Take a look at some of the works in the show after the jump, images courtesy of Roq La Rue.