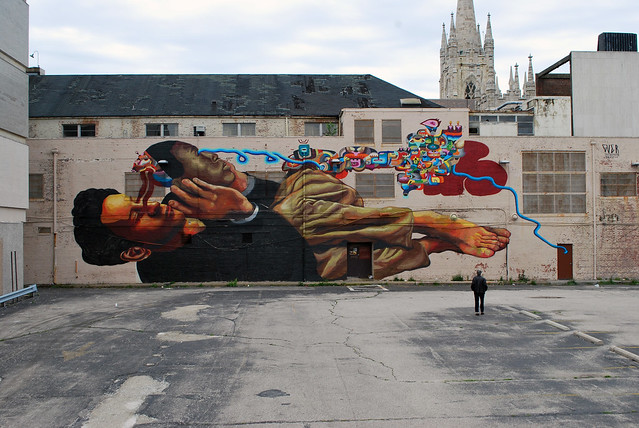 Using a blend of surrealism, spirituality and politics, Argentinian street artist Ever paints murals that cushion social criticism in a flurry of bright colors, dreamy, cloud-like forms and whimsical characters. Ever has an active mind hungry to assemble his philosophical ideas into paintings. In unfamiliar places, he begins to observe and digest the social phenomena around him, eager to create new meanings out of ubiquitous visual currency. Ever has traveled to various street art festivals around the world this year and currently finds himself in Paris, where he took a moment to chat with Hi-Fructose about his creative process and the taboos that fascinate him. 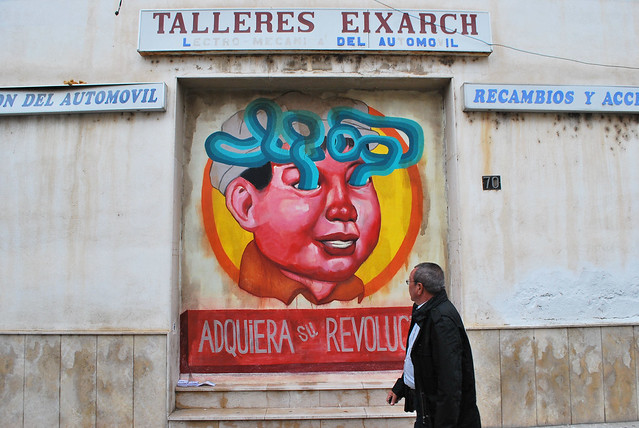 Buy Your Revolution in Amposta, Spain

What are you doing in Paris right now?

Paris is the city where my way of thinking began; it’s where my political ideology formed. Even though one doesn’t want to intervene in politics, it’s impossible not to because one’s actions influence society, given that interactions [between people] make a difference in politics. The French always ask themselves the “why” of their actions, which is one of my favorite questions in the world. I am doing a series of art projects with Paris Free Walls and Le M.U.R. projects, and also I find myself working on paintings for a group show in London at the end of July. 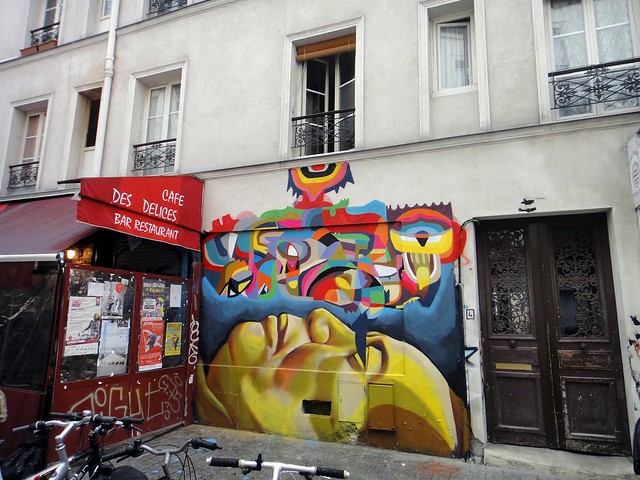 Where do you live in Argentina? How has the more permissive culture in regards to street art in Latin America influenced you?

In Argentina, I live in Buenos Aires… I believe the permissive attitude towards street art is owed to two factors: Firstly, that Argentina in the ’70s went through a dreadful period where people were punished for their ideas… The word “liberty” is very important in our country. For this reason, when I see an artist painting in the street, people feel that he is expressing himself freely and, until a few years ago, this was not allowed. The other factor is that the police has more important tasks than to arrest a young person painting.

… My art has developed with the sense that I want to interact with the city, and that I can take my time painting knowing that I’m not going to have any problems and I can focus on the act of physically and mentally expressing myself on the wall. The situations that emerge around the medium itself — that is to say, the city is an unpredictable machine — are a type of order and disorder based on the concept that you are introducing something “not established” to the lives of normal citizens [by painting on the street]. I believe that my work in the street is enriched with different symbols that it leaves with the observer, and that is the most exciting part for me because I go paint with an idea in my head, but that idea can change when I’m painting. 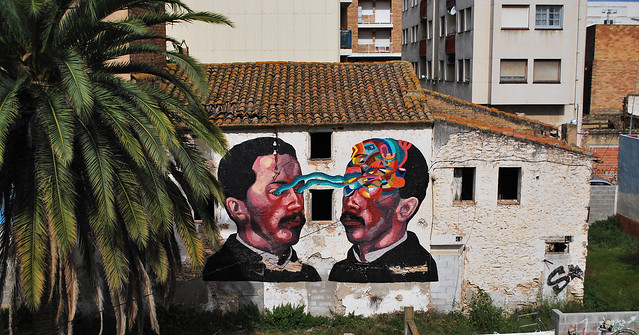 Are you formally trained as an artist?

I’ve never studied art officially, but I’ve drawn since I was little. My father would come from the office with giant pieces of printer paper and I would draw on them… I took some classes on how to use oils and acrylics. But painting in the street started because of the necessity to get people’s attention. I discovered graffiti when I was 16 , an age to discover oneself and be different… 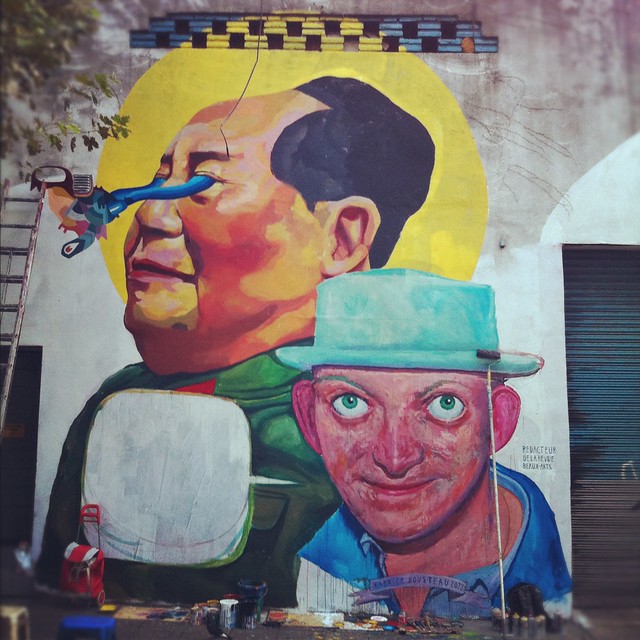 Have you traveled much to paint? Where was your most memorable destination?

My last few trips to the United States were interesting… I went to Baltimore for a project called Open Walls. My wall was located in an area at the divide of the predominantly white and African American neighborhoods, and I could see how people would cross into each other’s neighborhoods. Most of my interactions were with homeless crack addicts looking for something interesting to do… It made me think about how the state keeps the lower classes “asleep” so that they don’t wake up and question reality. My wall in Baltimore attempted to address this, to think outside of the logic of society and realize that the body is only a device for life on Earth, that there is a part of our soul that could “wake up” and leave this suit that is our body. 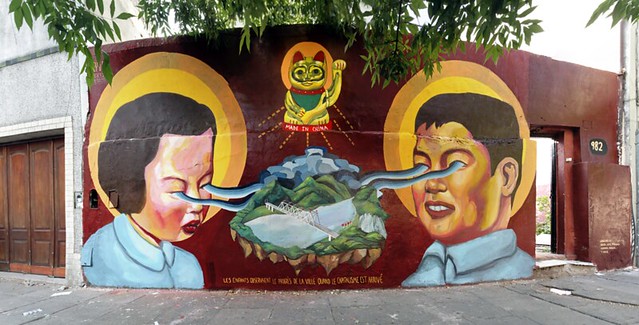 A lot of your work uses iconography from Chinese communism as well as Catholicism. What new meanings does the surrealist mixing of these symbols produce?

The meaning of this juxtaposition comes from my interest in the contradictions of politics… New generations of young people feel stagnant, that a future doesn’t exist for them, and they know that what exists is not working so they attack the most visible enemy: capitalism… “Communism” is supposed to mean the opposite of capitalism but… we can see in practice it is the same…

Same with religion, sometimes I see that people can’t handle their sins and it’s necessary to create a god that dominates everything. I try to express the idea through my paintings that we only are a product of our environment and there aren’t any gods who can forgive us — it’s just us. I use religious symbolism to communicate with the viewer and to make my [mundane] subjects more “divine.” I think the combination of these meanings suggests that the answers don’t lie in one place, and that we can create something from nothing, and look forward instead of backward. I use the abstract forms of my imagination as a kind of soul… 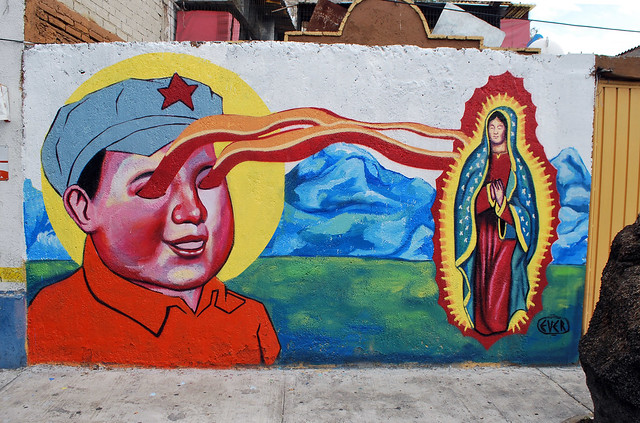 Do you have any projects planned this year that you want to mention?

Yes. I would like to buy a bike and a parrot. In September I’m going to a street art festival in the Caribbean where there are 6 women to every man, which will be interesting.

Take a look at this video for more information on Ever and footage of his work in Mexico.