Michael C. Hsiung is one of the most awesome illustrators in the United States. Not only is he epic with a micron and a member of the super artist collective known as The Human Pyramids, but he’s also hands down one of the nicest dudes around. I went to his home studio, where the walls are covered in his floor-to-ceiling art collection of wild stuff like unicorns, a harpoon, and a shiny Def Leppard poster he found at a garage sale. And we sat in his living room while Black Sabbath’s Vol. 4 wailed on in the background. It was so inspiring to hear his story because Michael proves that it’s never too late or too soon to follow your dreams and kick butt at the same time… – Daniel Rolnik

Where did you get the laser cut wood pieces?

Portland based company Grovemade did a wall art show and sent me a couple of the extra ones. I wished I had more though, because it would be really cool to give them away to people.

Did you go to art school?

I didn’t.  It’s a weird story and believe it or not I actually had short hair and glasses at the time! I went to college in San Jose for English Lit and Technical Writing. My sister Pearl did art, so I never went into it – I would just do comics for fun as a kid. 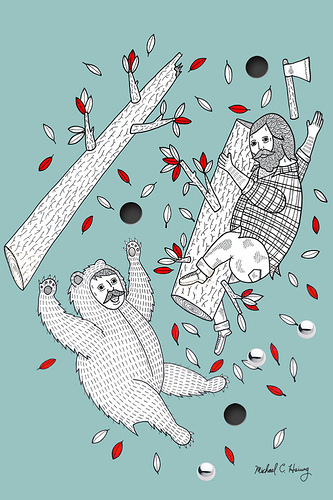 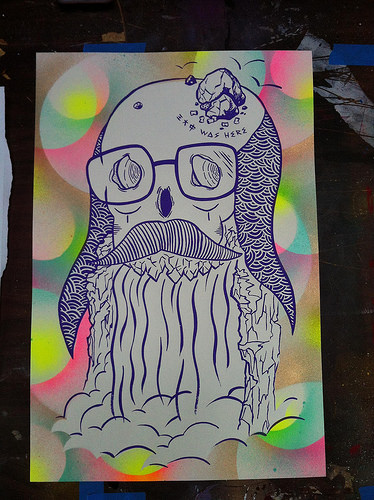 Yeah, we were in Silicon Valley and of course when we all graduated there weren’t any jobs. I ended up working in schools, got laid off and then took a temp job at this private investigation firm. I would write background reports, but I thought it was really lame when we’d have to tell employers that their potential hire had gotten a DUI ten years ago because it ruined their chances of getting a job. So I was super depressed at the time and eventually my sister convinced me to stay with her in LA, so I left the Bay.

What did you do to battle the depression?

Not shave. I was taking photo classes and really just doing everything I could to have a creative outlet. Around the time when Myspace was really popular I ran into an ex-girlfriend and felt so down on myself when she asked me what I was up to and all I could say was nothing. Haha.  I was like fuck man, I need to get a job, but my sister Pearl kept me cool and said to just take it easy and see what comes – so I did and it’s all worked out.

How did you start getting into art then?

I had this old buddy of mine Mike Stilkey who I grew up skating with and we started hanging out and going to art shows. He’d show me FecalFace and all these cool art sites and I would just hang out at his house and doodle.

But you weren’t thinking of even showing the pieces, right?

Oh no, if anything I would only show them to my friends make them laugh. It started with a drawing that said “Let’s Carpool” which I made on our way up to SF for New Year’s.  They were making “show me your boobies” signs and that’s what I came up with.  Then I was encouraged to draw from then on by friends and my sister.  Because I didn’t really know anything about art materials and etc. , the only reason I used black and red Microns a lot in my work was because that’s what Pearl’s boyfriend had given me to draw with.

How did you get into your first art show?

Two of my coworkers at the Gene Autry Museum ran a gallery named Echo Curio and they asked me to put a piece in one of their shows.

You worked at the old-west cowboy museum!!!

Yeah, I was there for about two and a half years as the assistant grant writer and later in membership services. It was a regular job, so I had some time to draw and put my work on Flickr when I wasn’t at work.

Did you ever get any jobs from posting your images on Flickr?

I actually wound up being commissioned by Doc Martens to illustrate some characters for their shoes through Flickr. Well, I think at least. I thought it was a total scam at first, but then they sent me the contract and everything. I guess someone at Saatchi and Saatchi, who I had never heard of at the time, had found my work on the site. I remember opening the check at work and seeing that it was in Pounds instead of Dollars, so it was like double what I thought they were going to pay me! Then I did other stuff like skateboards for Enjoi and I still don’t really know how people found me.  I’ve been lucky that way.

So you weren’t actively spreading your art online?

I don’t even think I had an official website at the time, but I was active online.  You know meeting other artists through Flickr and Myspace.  Internet buddies.

When did you start doing art full-time?

Around 2008 the museum started slashing people because they were downsizing. I had survived like 3 or 4 of them, so I was kind of prepared in my mind for it. I mean at one point my boss left so I was just in the office with no work to do. Eventually they moved me down to membership services where I had to deal with a lot of the members who were elderly.  I’d listen to all their stories on the phone.  One day all the uppers called me into an office and said  ‘sorry we had to eliminate your position’ so I cleaned out the desk and headed out. It’s kinda of funny too because my cousins happened to show up that day for a tour and I told them I got laid off.  Instead they took me out to get lunch, and then I went to cast my vote for president.  Yup I got laid off on Election Day.  And after getting laid off, I was determined to figure out how to focus on my art, so I started doing a lot of prints that first year.

Were you making the prints in your apartment?

Yup, I had a poker table that I drilled some hinges into, but it turned out to be a nightmare because of how messy it was. Eventually I got a Gocco that I still have which made everything a lot easier, but like the Polaroid, it was becoming obsolete and the supplies were limited.  It’s this really cool little Japanese printing machine, too bad they went out of use.

How did the skateboard companies like Ambig Clothing start finding you?

Sometimes I get an email saying that they saw my art after an intern put it on their screensaver, or stuff like that.  As far as doing stuff for Ambig, I was lucky enough to meet Teddy Kelly when I became part of the Human Pyramids Artists Collective.  I’m still looking to do more stuff though hahah.   As far as getting to blog for Vans, it was really something that happened.  I started contributing to the FecalFace blog here and there, and well, a friend at the time’s co-worker thought I’d be a great match for the Vans art blog.   Now I contribute to both!

Is it true that you make your own stickers?

Yes, I print them and then cut them all out myself. They’re a pain in the ass.  I print them out, package tape them and cut them all out.  My hands are crooked from it. I would get them printed, but it’s just so expensive to do dye-cut stuff. I used to sell them in packets called shitty stickers just to preface that I’m making these at home, so no one gets too disappointed.

What sized Microns are you favorites?

8’s, 5’s, and 3’s. I also really like to use calligraphy and rapidograph pens too.

Were your parents artists?

No really.  My dad was a math guy, but he used to grind up his own ink to write Chinese calligraphy.  My mom was a housewife most of her life, and only recently started doing ceramics and drawing.  She’s really good I think that’s where we get it.

How long did it take to draw The Steve Turner map of artist’s homes?

It took me a month and a half to finish – it was so hard. We kept adding places to the map like The Getty – which I wasn’t even sure I could draw. It was a pretty ambitious project, and I was nervous whether or not I could pull it off.  So what I ended up doing was finding good photographs that I would outline and then fill them in with my lines otherwise the buildings would probably look like lumps or blobs with windows and doors.

Did you use Google maps for the whole plane?

I actually had a map and plotted out with pins where everything was – which helped me learn the freeways a little bit. I also used Google Maps a lot to reference the buildings, but some of the images were messed up. For instance, the Steve Turner gallery has a bus right in front of it so you can’t see anything.

Do you still go skateboarding?

I wish I did! I grew up street skating so I’ll do a heel-flip every once in a while.