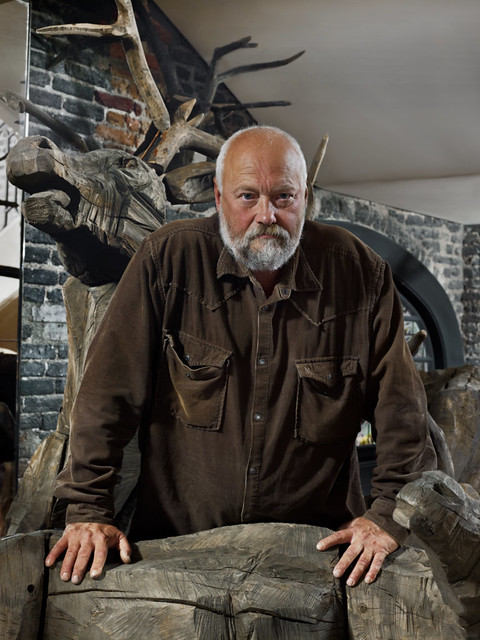 Moscow Russia provides the backdrop for one of the modern art world’s more intriguing site-specific artists, Nikolay Polissky. Whether discussing the importance of art in the modern world with ex-peasants or exploring the new frontiers of contrast harmony with famed designer Philippe Starck, Polissky continues to challenge the norm with some of the most impressive and thought-provoking installation works around.

Born in 1957’s Soviet Moscow, Polissky took his interests to study at the formidable Saint-Petersburg Academy of Art and Design. The artist began forming his current work mentality afterward with a co-op called Mitki, a protest based group that instilled in Polissky a strong sense of the working collective’s ability. The artist currently produces impressive large-scale installation works using what he calls co-authors, his own personal group of resident idea testers. This personal affiliation gives him the ability to create site specific works out of materials indigenous to the landscape that are often re-used by the local populace. Join us now as we take a look at Polissky’s fascinating progression of works, created not far from the most northern city on Earth. Nathan Spoor interviews the artist below.

Firstly, thank you for taking the time to speak to the readers about your work. To begin, please tell the readers where you are from, and where you currently create your works. Did you attend a university or have any artistic encouragement to find your way to this creative endeavor?

Thank you for your interest!

I was born in Soviet Moscow in 1957. I studied art in Saint-Petersburg Academy of Art and Design in the name of Muhina , I hope it’s right translation of Soviet ‘academy’ like institute. Before 2000 I was more doing painting, graphics and sculpture, moving slowly from figurative to contemporary art. Since 2000, I started to work in the space of natural and city landscape.

The place where I work is a huge part of my artistic life. Nikola-Lenivest, is a barely inhabited village, 200 km from Moscow, the back of beyond. My first project appeared there. Local villagers, peasants from this place are now my co-authors I do my projects with all over the place. Now this village is becoming an art-park, center of contemporary art under sky in eco-environment. We do yearly festival where we show new creations of modern artists and architects from Russia and some European guests. 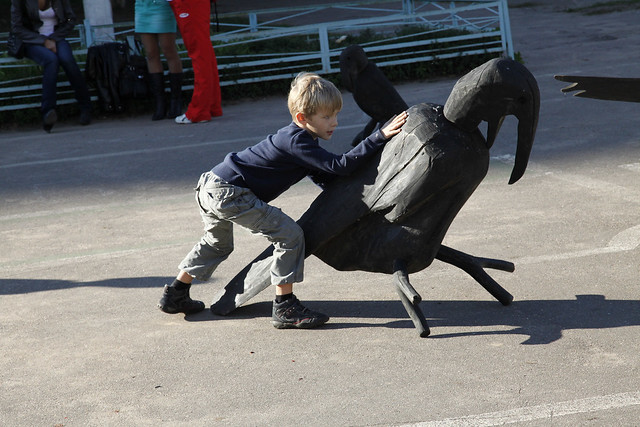 “The Rooks Have Returned”

Your work has been tied to a movement called Mitki. Can you tell us about that, and what it led you to in your work?

I liked Mitki as a living environment. It has a protest core inside and at the same time healthy national tint. Working in a collective gave energy, scale and sure of social group.

Now I work with a group of ex-peasants, my co-authors. It’s my own collective, but more or less made under same principals.

Collective approach helps to give bigger scale to what you do. What is even more important, that you feel sure of what you are experimenting with. You test your ideas on each other. Co-authors either agree, or criticize, both work as a litmus paper for your ideas. 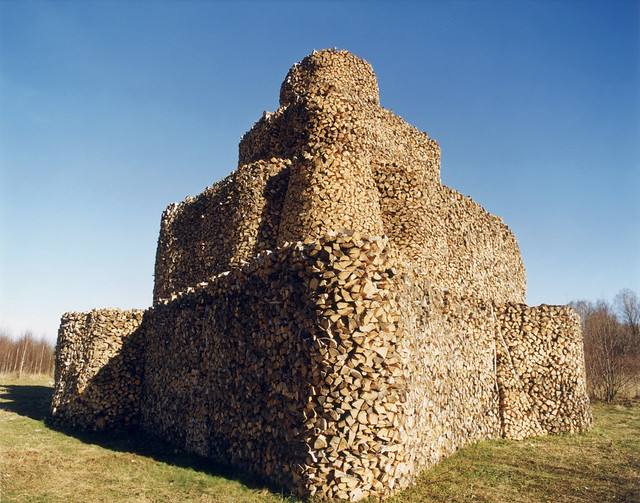 As you approach a new piece, do you have the idea and then find the location or is it the other way around?

If we talk about my work in Nikola-Lenivets, my main art laboratory, where I know everything – landscape, materials, resources, temporality – ideas just come out from the background knowledge. I bet other artists could envy me. I have a space to show my works that is linked with me on a superior level.

At the same time, if we are talking about pieces installed in the environment, that is new for me. I investigate the location greatly. First of all, I talk a lot with locals. They tell me about problems, history, people, art, space, time, changes and their links with the place. Then I ask to show me the typical materials, it should be cheap and available in huge amounts. Then it’s the time for idea.

When I visit new places, I tend not to have an ace in the hole, a ready solution. And when I do have an image, first of all I test it on people who really know the place. It is very important to make public art that could be accepted, art in public space is what people live every day with.

With such a broad range of works and installations, do you find any particularly more challenging than any other?

The challenges differ one from another. You wanted to sculpt something of snow, and the Russian frost come down (if you are reading it from tropical place, if it’s going lower then -25C, snow becomes crumbly), so you have to invent a technology to stick it together. Other way around, out of nowhere a thaw has set in, and everything you just made is melting down. That’s what you get when you want to make an art of nature. It doesn’t really care about your plans.

Other challenges are more of political layer. In Russia people can scold you for making art. They are not used to it, or think it is useless for them. Life is not good everywhere here, so they ask wouldn’t it be better to spend money on poverty or some social programmes. Big moral issue for all of us, but there is no future without art. 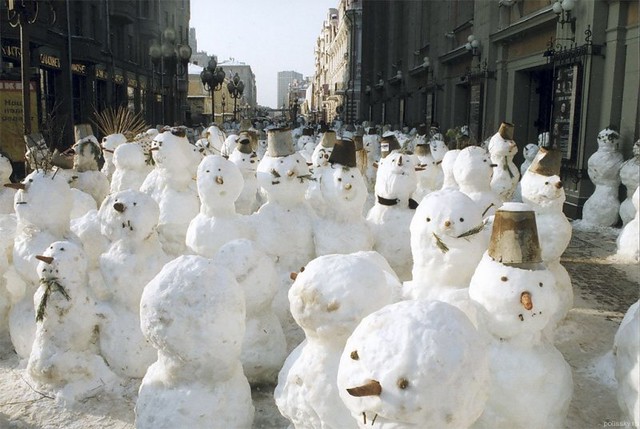 On looking at your body of work from 2000 to now, there seems to be a transition from purely natural materials (Snowmen – 2000) to slightly altered natural materials (Firewood Tower – 2001), then incorporating technology within the installation (Empire Column – 2003) and setting it into a modern atmosphere. What was your process or intention in this evolution of thought and work?

I think that the process was absolutely organic. First invasion in untouched nature of Nikola-Lenivets, was childishly free of any problems. Snow? Free. Land, space? Kolhoz just disappeared, so there were no owners. Land was finally given to peasants, as Lenin proposed 70 years before! Same story with grass we made hay of, and given even some away to cows.

‘Firewood Tower’ made of firewood. It was then used in ovens. So it was free again. I bet you get the point. Making our huge towers of what is available. That was the opportunity of the moment we used. Now times are changing. I am getting invited to places, where I can use what could be used.

But the core idea is still here. I am always looking for harmony. In nature it could be natural materials. In city park – something should connect it with the city. surrounded by industrial zone? Then go for metals and industrial materials. 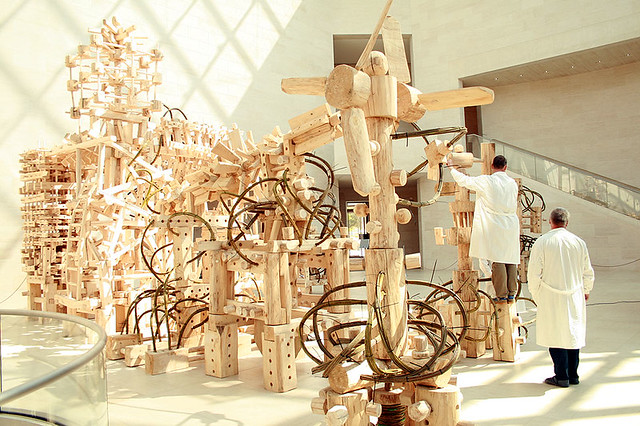 Following those creative steps, you stayed true to the nature of the material, wood, but then made a leap to transforming the pieces into a more technological statement with Large Hadron Collider (2009), which almost seems like a performance work. Could you tell us a little about how this came about and what all was involved in its realization?

Collider is a big event. It impresses me, in the world where you barely get impressed. It impresses in the modern world, but imagine this thing made with life in Russian village, if you can think of it. But, we want to be a part of that world. So we take wood, metal, sticks and try to make our own as we see it.

We try to find some natural emotions, bring it back to the roots. All that science came out from wooden mechanics of Leonardo, so we restart that way. 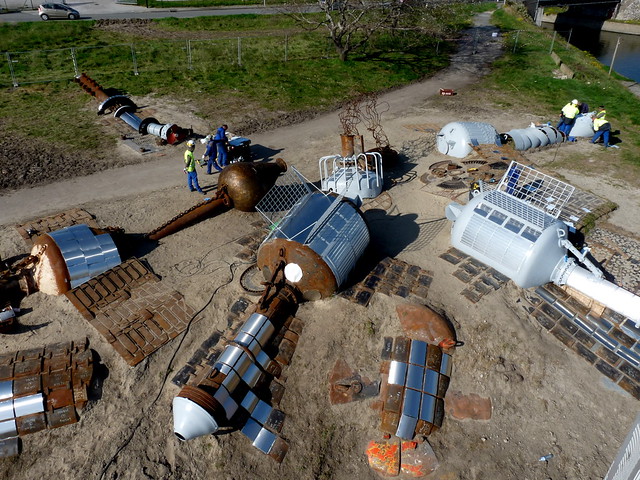 In keeping pace with your movement, one of your latest works is very site specific and departs from your previous wooden constructs. Can you talk a little about Spoutnik (2010) and what it means to you, and how you worked with the challenges of installing art into the urban landscape?

That project was made for Dunkerque, industrial city in post-industrial era. Concept is usual for western world, rehabilitation of depressive regions of the city. Old port, that is pretty close to the center of city, but at the same people don’t go there. So we have to change something. Going in Dunkerque, I saw huge old metallic oceanic buoys that were going to be recycled and changed in the ocean with new plastic ones. Those old ones were beautiful – the size, texture, memory of time. So it was a key material. But you have to wrap those things in some fun idea to impress people tired of the metallic things laying all around the city. And the idea of space has come by.

I see that now, all best things go to heaven… to space, like it was temples in ancient times. So there is now an archeological layer of ready-mades flying around the planet. It would be fun to do space archeology in here. All these went into the idea of Spoutnik, a space satellite, found as an archeological discovery on Earth.

For the name we went to show that some Russian words are used internationally, as Spoutnik, but it’s getting forgotten though. During the opening venue, I met two elderly French ladies who told me that exactly near the installation in 1957 they saw first soviet Spoutnik blinking in the night sky, when it pioneered the space. It is also the year of my birth.

One of the favorite aspects of your work, personally, is your use of animals in the narrative. Specifically, your work with Philippe Starck for the hotel in Paris that features several four-legged creatures milling about in a lobby under a set of stairs (Hunting Trophies – 2010). Do you feel a different draw to the works in a smaller indoor setting rather than the larger, more subject-to-nature works?

I actually see ‘Hunting Trophies’, as a large-scale installation. When those animals will gather up as big flock, let’s say two or three hundred sculptures, then they will obtain an energy of collective, organized nature. Psychologically this could be shocking. We are used that we structure the nature, but what if the nature will get organized? Those powerful creatures, all together, going somewhere straight together…

In a small setting of Royal Manceau, it has other meaning. In a super- bourgeois interior – our pieces could shock viewer. Its rough form and technics made dissonance with the rest of the space. This contrast is the key. There is nothing provocative in the concept, but the form makes you wince. That is a new feeling for me, feeling of contrast harmony.

Again, we thank you for your time and generosity in sharing with us. As we part ways for the time being, is there anything coming up that we can look forward to? Anything in your sketchbook that might give rise to the next Polissky installation?

Now in our village, we are doing our biggest project in Nikola-Lenivets. We call it ‘Artificial Intelligence’ or ‘Universal Mind’. It looks like a half-ruined antic or Egyptian temple, of a civilization obsessed with science. It’s not clear, if they are from future or from the past.

The process is in the middle, but people already tend to get into the appearing mystery. 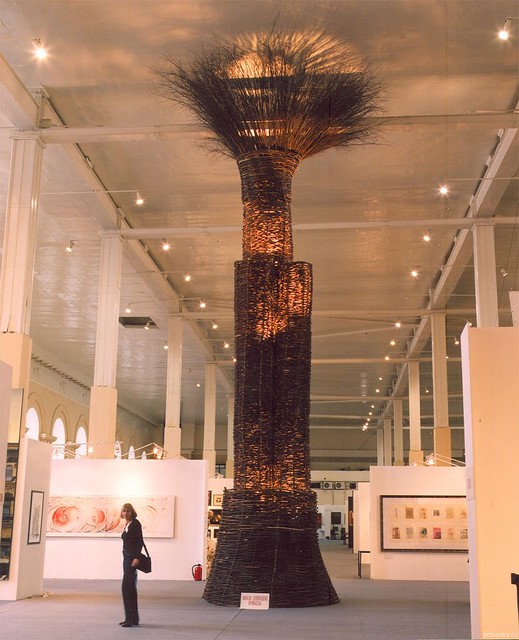