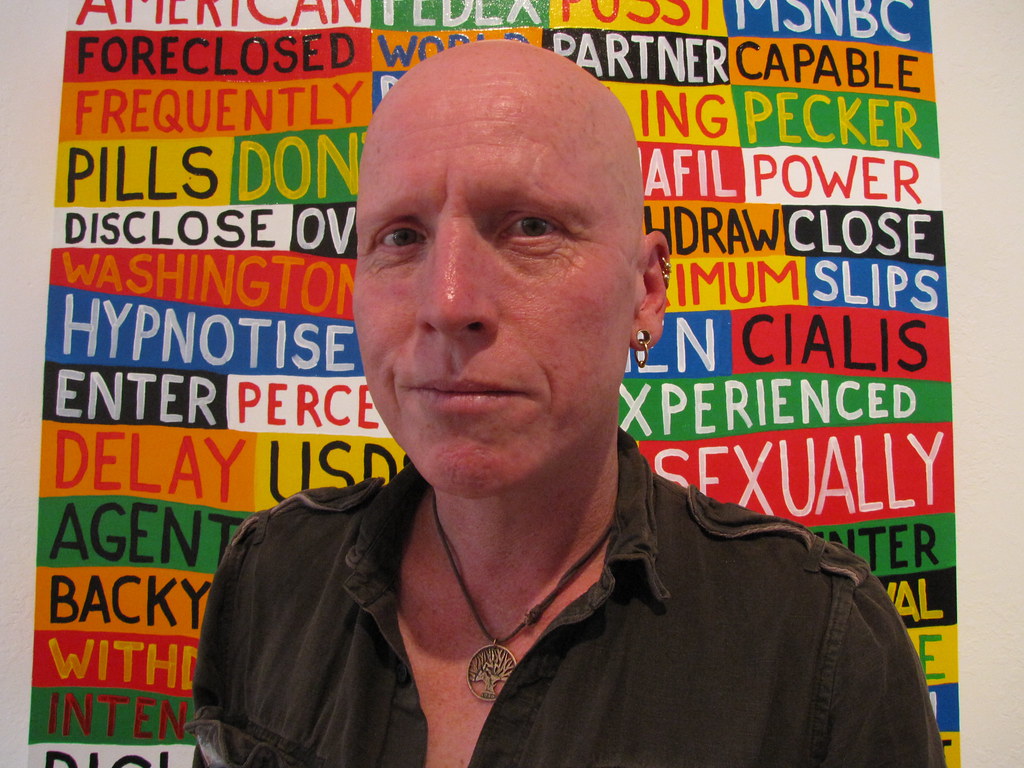 A living legend in his own right, Stanley Donwood has arrived in San Francisco is currently installing his debut US show over at FIFTY24SF, “Over Normal”. Hi-Fructose sat down for a few quick questions with the artist who has affectionately become known as the sixth member of the seminal rock act, Radiohead. Interview and full show preview below.

Greetings Stanley, first off, thanks so much for sitting down with us at Hi-Fructose. Would you mind telling our readers a little bit about yourself?

Hello Mr Fructose. I’m a little bamboozled and discombobulated by international travel and lack of sleep. I’ve been setting up the show in San Francisco. I’d rather be wandering around the city, to be honest; I’ve never been here before. I’m overwhelmed by the strange nature of the city, all wooden Gothic houses, freeways, electric trams, and the rest of it. Earlier this evening I watched a dense fog descend like a shroud over the tall buildings of downtown. It was both ominous and beautiful.

For over a decade you’ve worked closely and extensively with group Radiohead, for which works you’re best known. How and where did this relationship begin?

Excuse me, but the house two doors down appears to be on fire. Hold on a minute. I met Radiohead in the closing years of the last century, when I was hitch-hiking around the UK trying to earn money by demonstrating the art of fire-breathing. When Radiohead were a little-known band playing in the upstairs rooms of pubs I was going to be their support act, but I was prevented from doing that by the vocal objections of the pub landlord. No fire-breathing in my pub, you must be crazy; that sort of thing. So yes, that;s how it happened. This really is a true story, I must add. 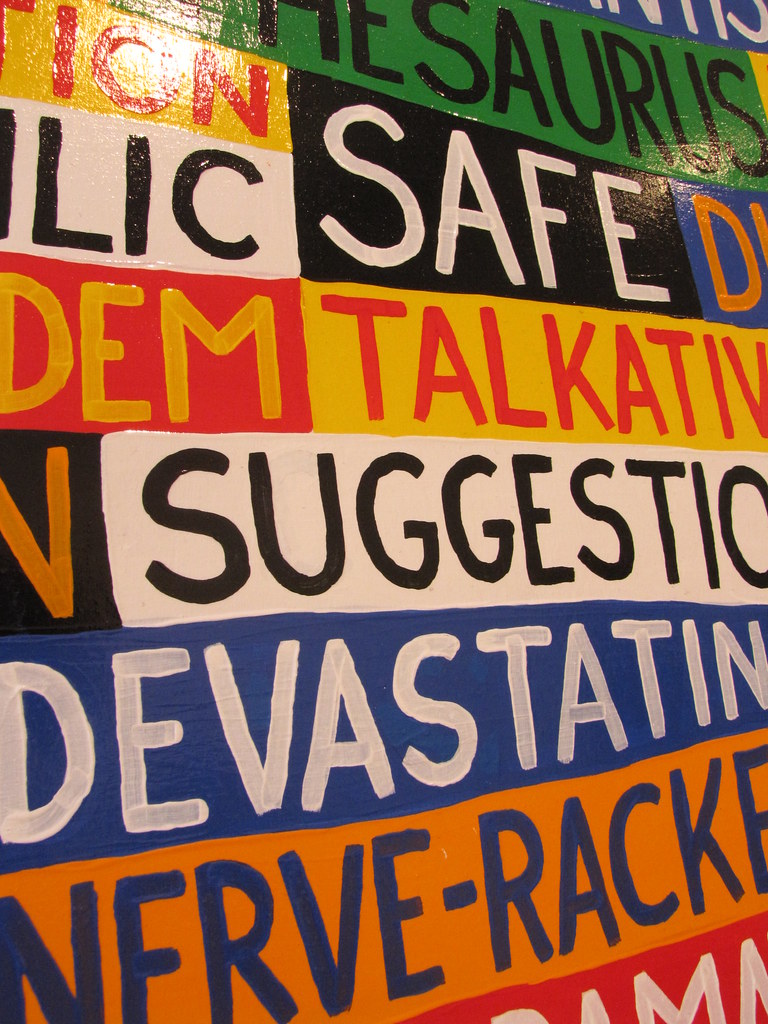 As the band has evolved musically since the early nineties your work has evolved as well. Has the evolution of the band and of your work been in step with each other? Do the two influenced, or are they affected by each other?

It’d be true that I’ve worked with Radiohead a lot, and also true that my work with them is probably the primary outlet for whatever it is that I’m doing. Usefully, our obsessions tend to coincide. I have certainly liked Radiohead’s music more and more as time has passed, and it is a massive influence on the work that I make with them. I listen to it changing during the recording process, and while I don’t attempt to illustrate the music I try to absorb it and filter it through my own mind into visual art. But whether their work affects mine in a specific sense is hard to be specific about. We could talk about feelings evoked by certain states of mind, current obsessions, but I’m unsure how directly these translate into artwork. It’s all very hard to grasp; not unlike the mist that descended over the city earlier.

The Minotaur theme that we saw on the Kid A album cover seemed to have been revisited with your exhibition at the Schunck Museum in Holland. For Over Normal, your work on the Hail to the Thief album is the obvious inspiration. Is your return to California the inspiration for the palette?

Oh, for sure. The minotaur thing was for Amnesiac, and of course was confined to the pages of a CD booklet, so it was fantastic to be able to build a huge red maze underground in Holland. I would love to do that again somewhere.With regard to the work for Over Normal, yes, that grew from a direct response to the landscape of urban California. In 2003 when I visited Los Angeles to make the artwork for Hail to the Thief I began a series of large paintings, eight of which became the artwork for the record. I’ve been using the same palette of seven acrylic colors ever since, whenever it’s relevant to the work; as it is here, with Over Normal. 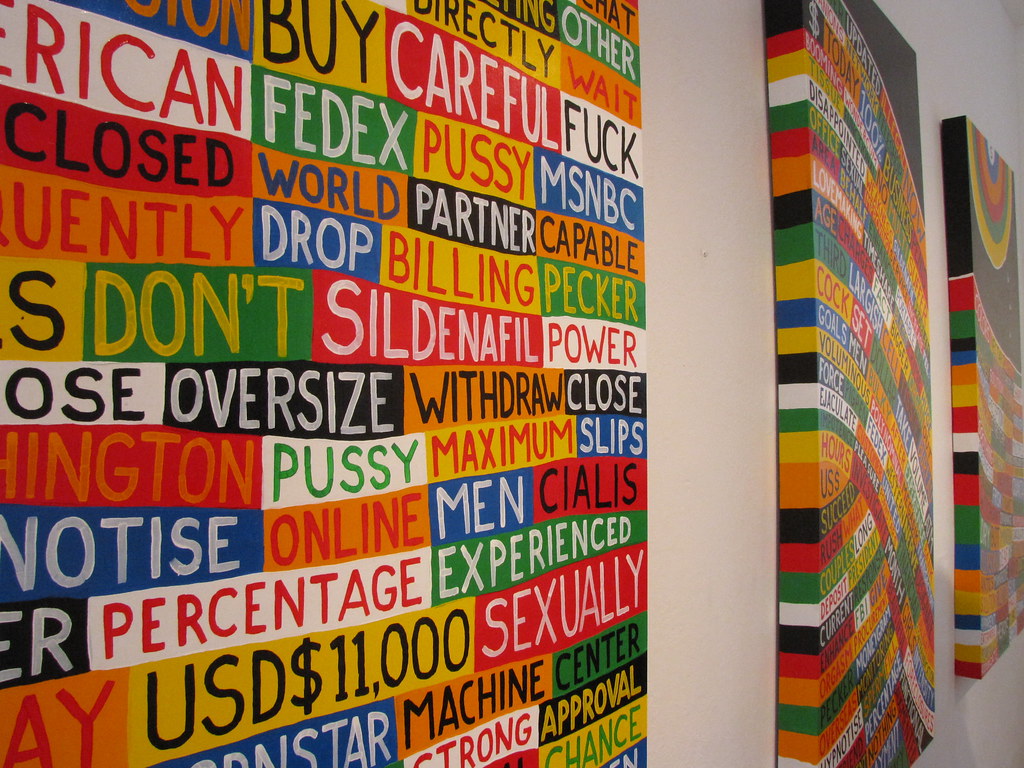 Can you tell our readers a bit about your word choices and where they come from?

There aren’t any choices, as such. I don’t decide which words to use or the order in which they appear. The words are harvested from spam email subject lines, separated from each other (and their context, whatever that might have been, or suggested) and then reassembled on the paintings. Their relationship to each other is defined by whether they fit into the colored spaces that I’ve painted, and the meanings that are suggested in the mind of the onlooker. The words themselves come from emails that were sent to my account. For a while I received emails promising me a bigger penis and a better sex life. These stopped, for some reason, and then I started getting emails offering me the chance to buy houses that had been foreclosed and repossessed. These things seem to come in waves; there were emails from people telling me that they had been disinherited from positions of power in African countries, and email which appeared to be simply strings of random words.

No! I haven’t had a good spam message for a while. I think maybe Yahoo have improved their spam filter too much. It’s a shame, because I love spam. For the show I’m going to go to Costcutter and buy a whole load of cans of SPAM for the exhibition. It’s interesting stuff. I think it was originally a British spiced ham product, perhaps invented during WWII for rations. Then there was a Monty Python sketch where they just repeated the word ‘spam’ over and over again. I presume that’s why electronic spam is so-called. 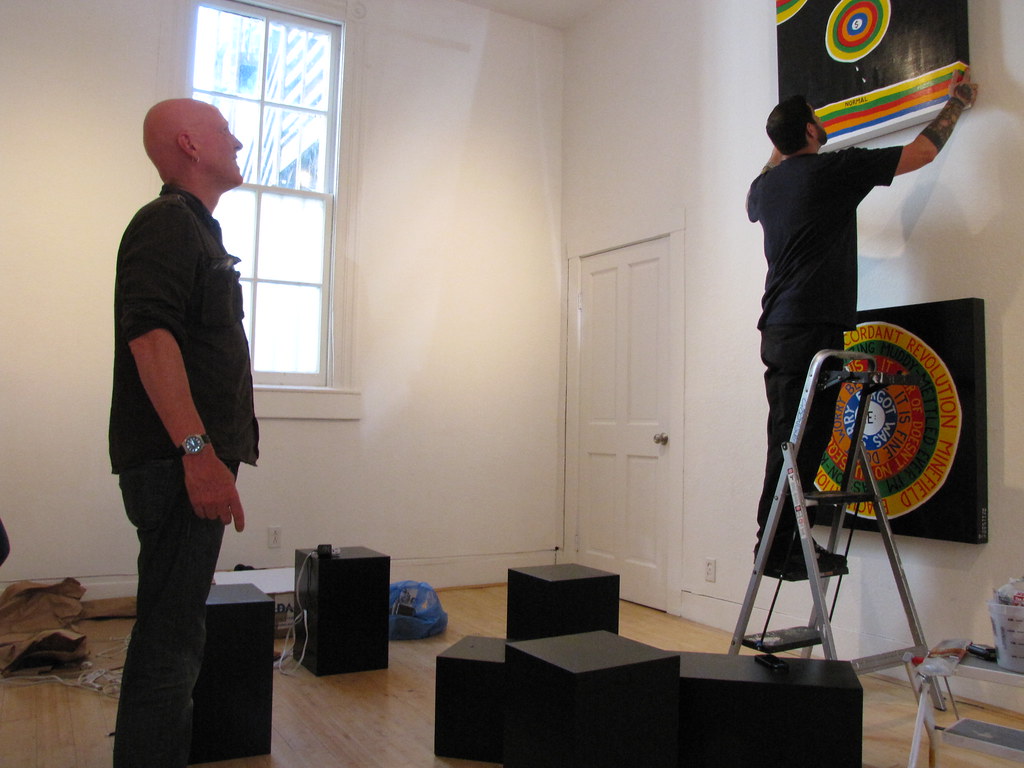 Let’s say you were to send out emails to random addresses you purchased off a spam site to promote your upcoming show, what would the subject line be?

I may well be doing that, so I can’t talk about it yet… 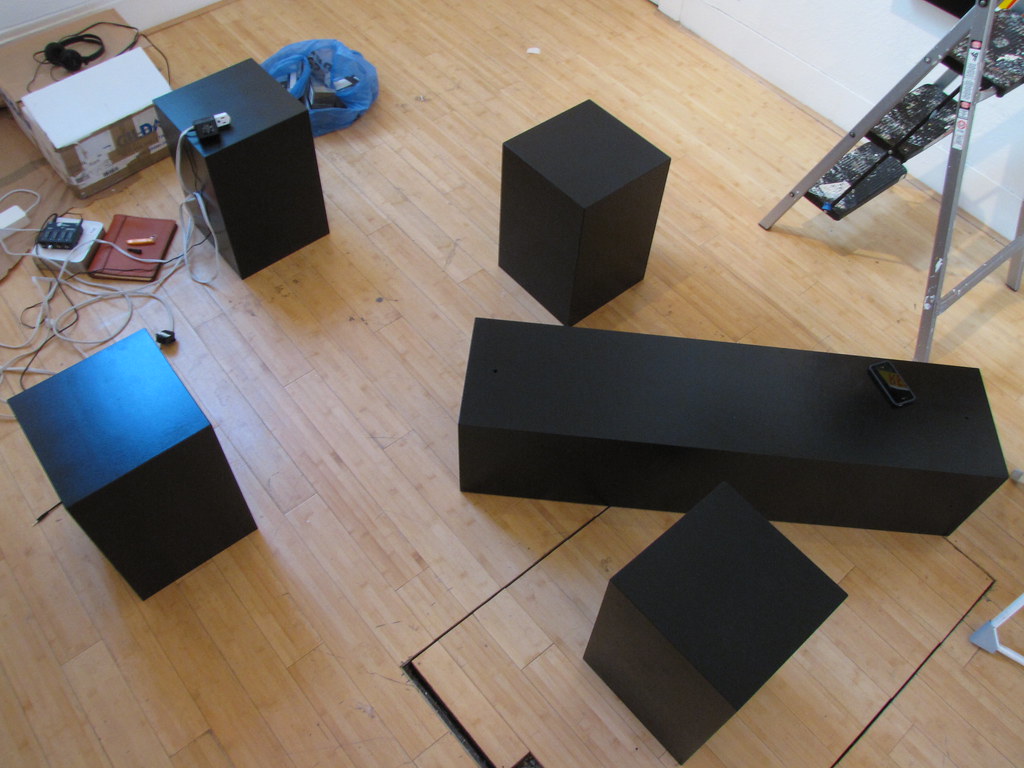 The Overnormalizer and Voder Simulizer, what are they and how do they pertain to the new works?

The Overnormalizer is a collaboration with John Matthias, so I’ll pass you over to him to explain it a little. –JM: We started by getting a simulation made of a speech synthesizer which was called the Voder, which was developed by Bell Labs for the 1939 World’s Fair. After some research, we discovered a synth expert called Norm Leete, who managed to simulate the inflexions of the Voder, so that it could speak the SPAM email messages. The original Voder was made using two input sounds, one soft (vowel) and one hard (consonant) and a series of filters which changed the frequency response of the sounds to mimic the effect of changing the shapes of the mouth and throat.The Voder spoken spam (or Voder Simulizer) is put through a device which I have created with Jane Grant, Nick Ryan, Tim Hodgson and Eduardo Miranda at the University of Plymouth, UK, called the Neurogranular Sampler.This sampler triggers fragments of the speech synthesis when any one of a network of 24 coded, artificial neurons fire. The neurons’ firing patterns adapt and change according to firing patterns and will continue to change and adapt during the course of the 2 month installation. Your new show seems to be quite a different departure from previous showings, what can we expect? It’s a bright, vibrant exploration of the quintessential colours of Californian roadside advertising mashed with the innocent purity of spam. It’s more than normal; it’s over normal. Say it loud; Don’t just be Normal, be Over Normal… 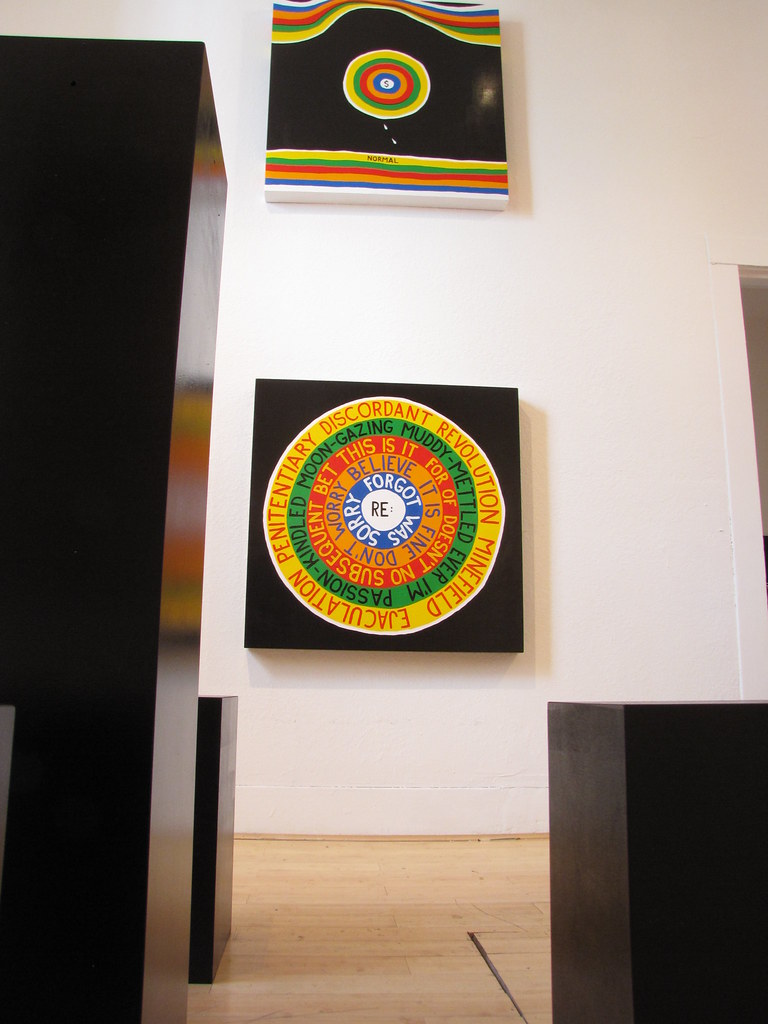 Thanks so much Stanley! Looking forward to checking out the show this Thursday!