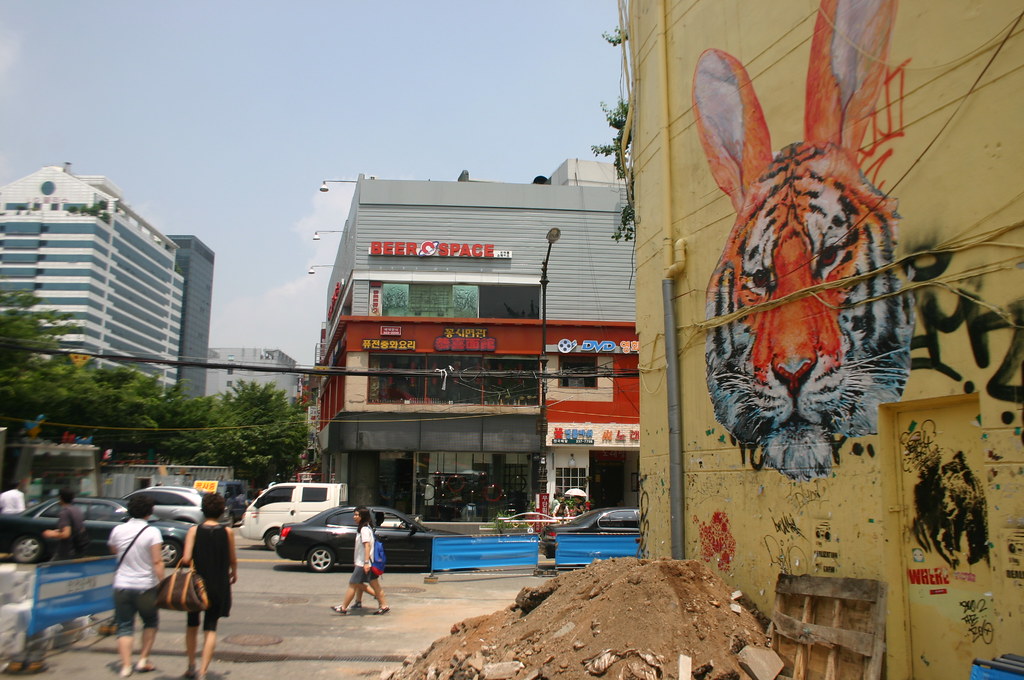 We recently caught up with Gaia to discuss his work in Seoul, a five-piece street art project exploring Korean culture and mythology—what he learned, how it changed him and why there’s a bloody handprint on the wall…..

Hi-Fructose correspondent Lauren Quinn sits down with the street artist for a quick interview. 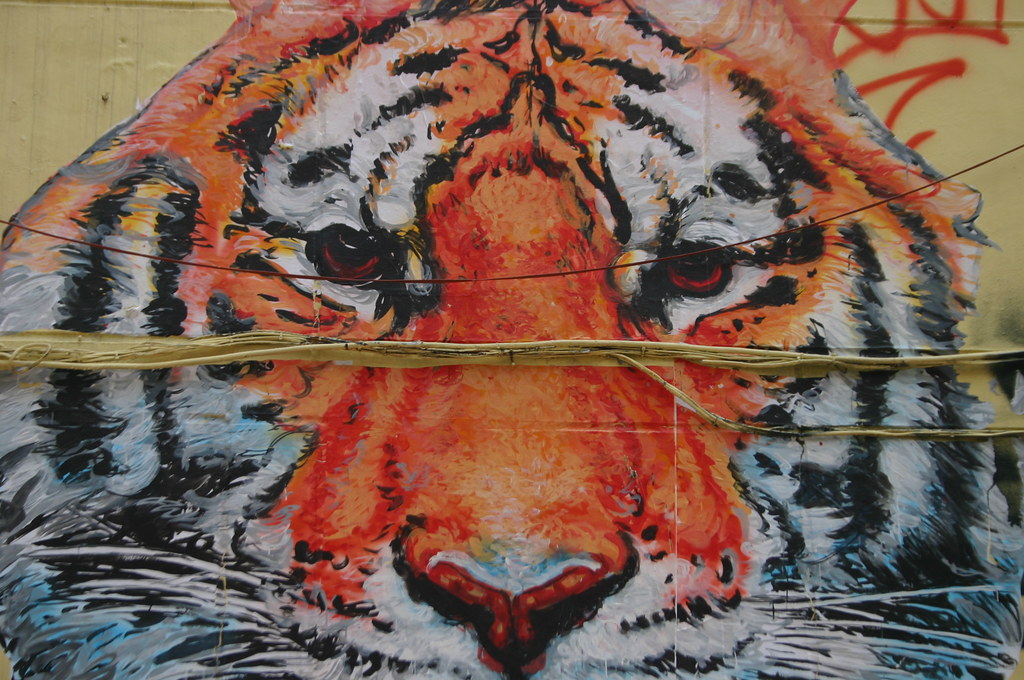 So how did you end up in Seoul?

I went to Seoul through an independent advisor, Mina Cheon, at Ewha [Womans University]. I was offered a one-month residency, and the project grew out of that. What’s the arts scene in Seoul like? The contemporary art scene in Seoul is really strong. There’s not as much street art, but regardless of what you see on the street or how it manifests, the arts community is really strong there. It’s an extremely supportive culture, and I was linked with friends who were able to help with the project. It was great, because I was immediately given entrance to a really close-knit arts community that I wouldn’t have otherwise had access to, as an outsider. 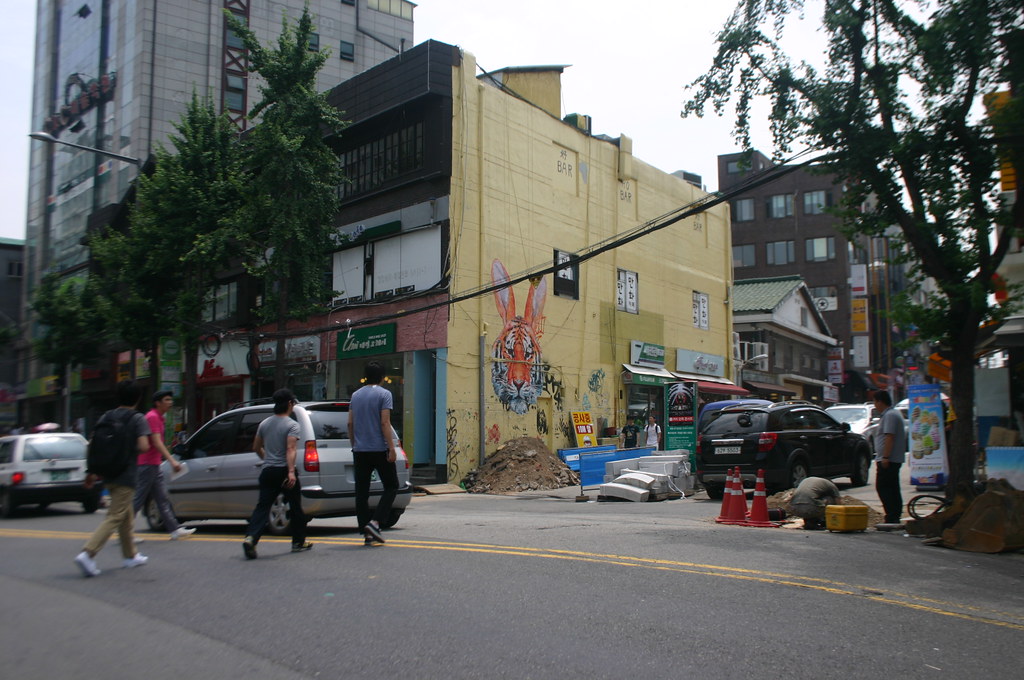 Can you talk a little about genesis of the project?

It was a project for school, for the residency. I was basically looking at the transmission of different cultures and religions through the vessel of this nation, Korea—as the conduit of outsider forces. I wanted to extend my exploration of traditional folklore and religion in the United States to Seoul. Korea has such an extensive mythology and rich history, and there’s also a lot of conflict between the traditional and the new. I made pieces about these conflicts for each quadrant of the city. The application of each piece was structured according to the principles of Ohaeng, in which there’s a color and energy for every direction: North, South, East, West and Center. My advisor helped a lot to guide the individual pieces. So did the friends I made. 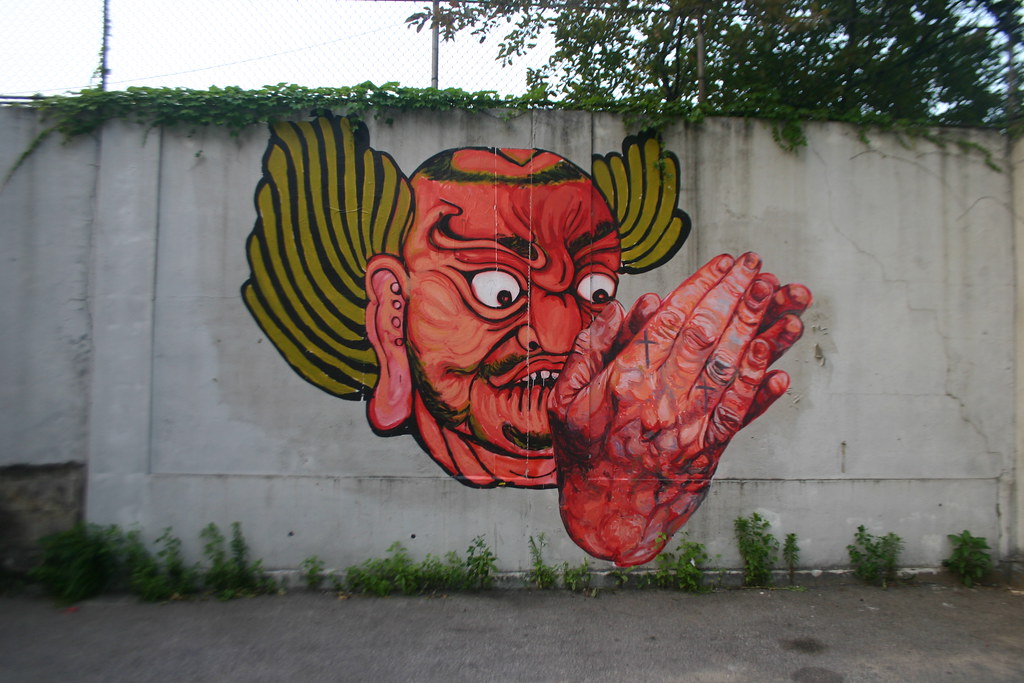 How does this project fit in with your work back in the US?

I’m working with locating urban American mythology. I use the animal hybrid as an expression of my generation’s frustration with globalization, with wanting to be a part of nature but not knowing how. Being in Seoul gave me the opportunity to go outside my comfort level and paradigm, and have a clean slate to produce work. I was really looking at the identity of the country—what defines them. And I wanted the work to be specific to a place. Korean culture is so rich that it’s easy, as an outsider, to explore—easier than when it’s your own country. Even though I’m not Korean and it’s not my identity—it’s not me—at the same time, it still relates to my life and how I live spiritually. 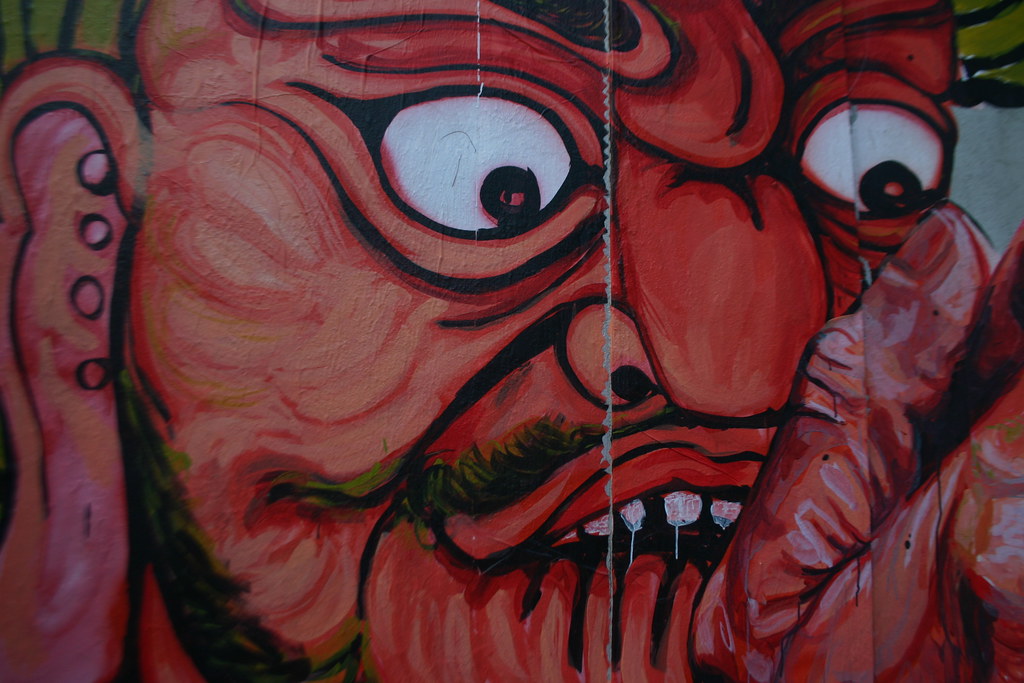 What was the reception of the project?

It’s hard to completely know, but from talking to people, the reception was positive. The artists I met were all really supportive. I talked to some people on the street, after the pieces went up, and they wouldn’t believe that it was me, that I’d done it. I’d ask if they liked it, and then say, “I did that,” and they’d say, “No!” Then they’d want to take a picture with me. (Laughs) You have an immediate status, being American. I definitely had a reticence, as a white American, in being in that role of colonizer or imperialist, taking cultural images and using them for my own work. So I took a risk. But people really liked the Japan and Buddhism topics. I really wanted to deal with the work sensitively. I didn’t want to make work not pertinent to Korean culture. 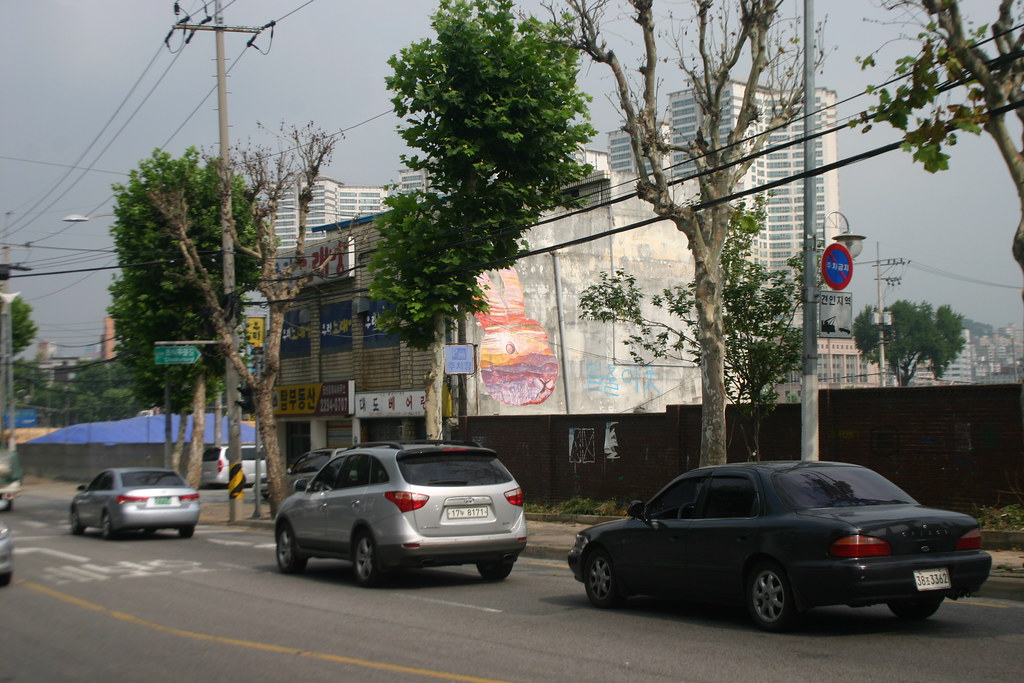 How was that a risk?

Well, it’s kind of a personal hold-up. It’s a risk to utilize their mythology; it’s something I’ve tried to avoid. I try to be acultural in the US—not using images of Native Americans, for instance. I really wanted each piece to be made for a neighborhood, and used that as the guide for my work—wandering around and taking the city in, trying to live in it. Like for the Praying Monk piece—I got the idea from seeing monks chanting at a temple I visited in the mountains. I placed the piece in the North of Seoul, where the palace is, because when Confucianism was brought into Korea, Buddhism was exiled. The image of the monk actually came from the door of the temple. 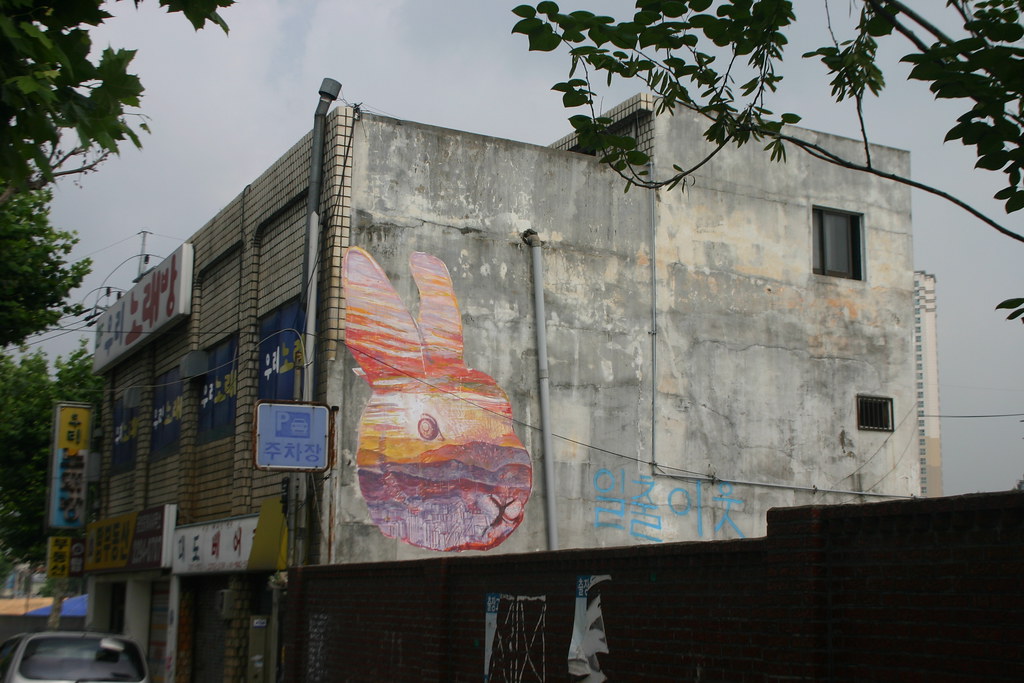 Do you think the project and your experience in Seoul has changed you? Do you think it’ll affect your work?

Definitely. In a couple weeks, I’ll be going to Atlanta for the Living Walls Conference. I’m going to do pieces of old, weathered black hands, in reference to the city’s history of slavery. I’m also going to do some large prints of old Cherokee portraits in the suburbs. We as Americans have this national imagination of Native Americans as being the original inhabitants, a romance around their connection to nature and spirituality. And suburbia has its own mythology—escaping the city, having your own plot of land. Which winds up as a layering of sprawl, where no one sees themselves as the problem: it’s always the next development, the other complex. So I’ll be using the visual strategy of hybridized metaphor, as a correlation between two seemingly disparate things. 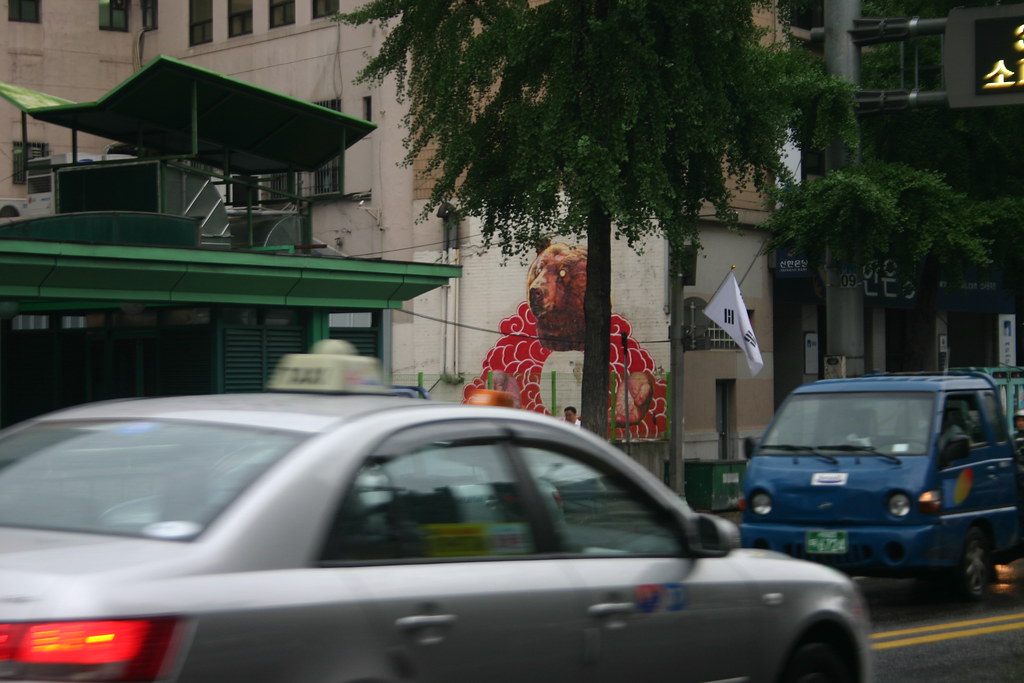 So you are going to do work on Native Americans?

Yeah. (Laughs) Is the Seoul project the most site-specific work you’ve done? Yes. I feel that site-specificity isn’t hegemonic—street art doesn’t have be site specific. There’s a camp of formal street artists who place aesthetic beauty over the political or social, and I see myself more in that camp. I used a fine-art approach to the urban environment. Korea was a floodgate experientially. It opened doors to things I was holding myself back with. I think it’ll be easier now to be more site-specific and relate to a specific culture. It’s definitely something I’m striving towards. But I want to do it responsibly. I just want to keep things responsible. 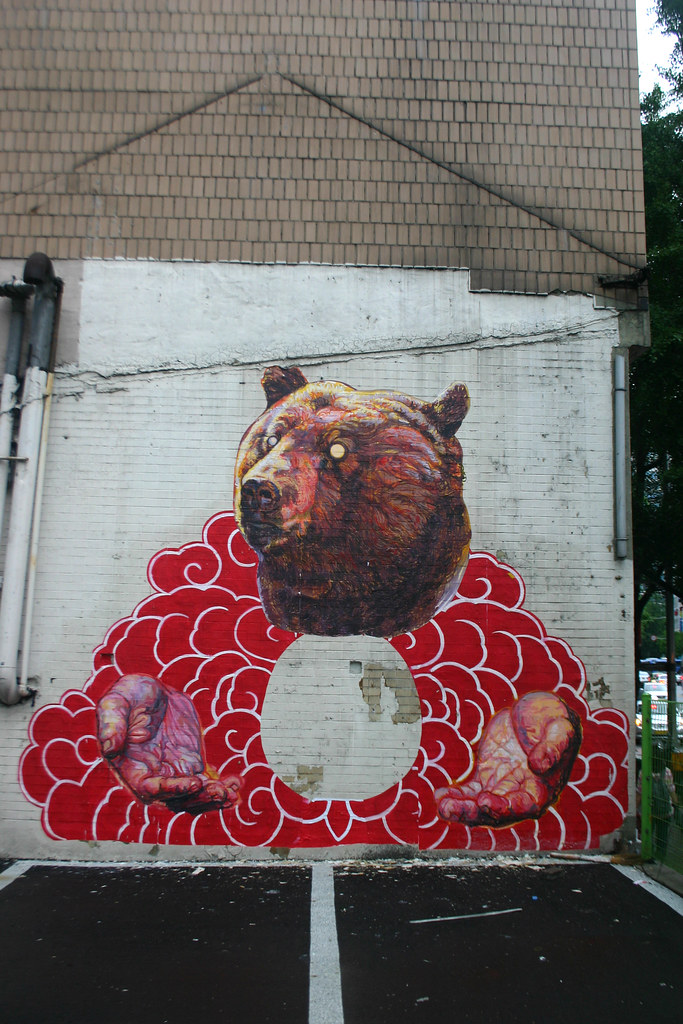 When you were putting up the Sunrise Neighborhood piece, I heard you fell off a roof. What happened?

I was trying to spray paint a slogan next to the roof. A Korean friend had written out “Sunrise Neighborhood” in Hangul, and I was writing it next to the piece. There was a ledge of corrugated plastic that wasn’t very stable, kind of falling off the wall. So I was holding on to a metal ledge. But I reached and grabbed the plastic by accident, and I fell fifteen feet in an abandoned house. I sprained my wrist, scrapped my hands, and was covered in blood. If I was by myself, it wouldn’t have really been anything; I would have just walked away. But because I was with people, I seemed like, you know, this hard-core street artist. (Laughs) But I had to finish the piece. So I wrote the slogan, using my hand to steady me, and left a bloody handprint on the wall.

Thanks so much for the interview Gaia!