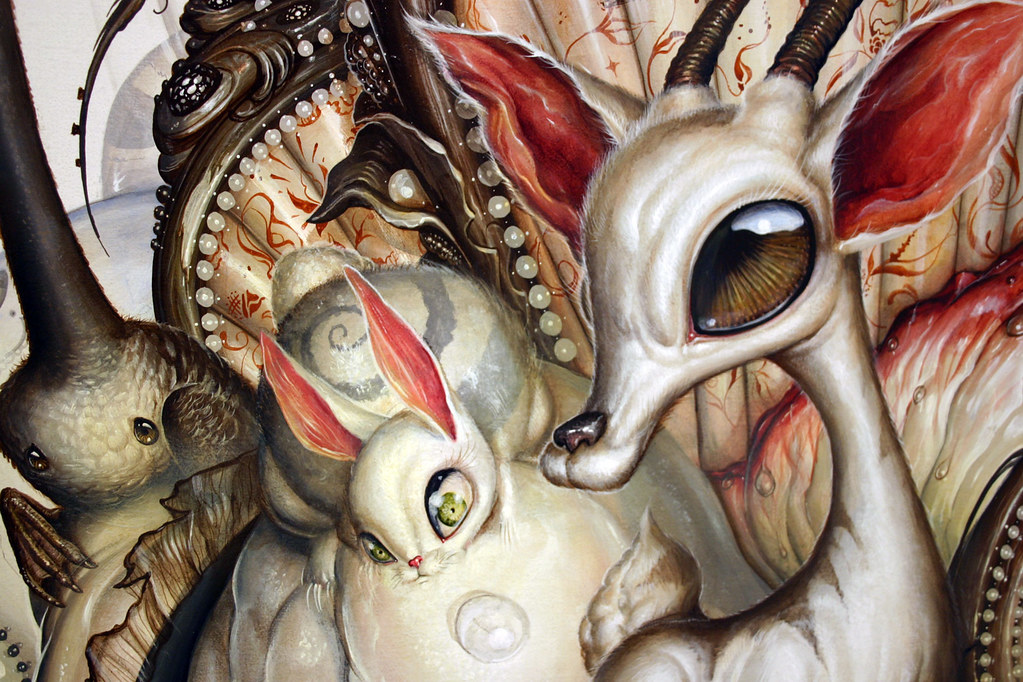 Greg ‘Craola’ Simkins returns to the East Coast with his impressivedebut of naturalistic paintings and drawings, “Inside the Outside” atJoshua Liner Gallery in NYC (previewed here and here). The show bears the artist’s trademarkstyle of “still life” composition while expanding on his approach tothe exploration his fantastical, dreamlike settings by using naturalelements and plant life that was inspired by a recent trip to Hawaii. HF correspondent JL Schnabel reports in. 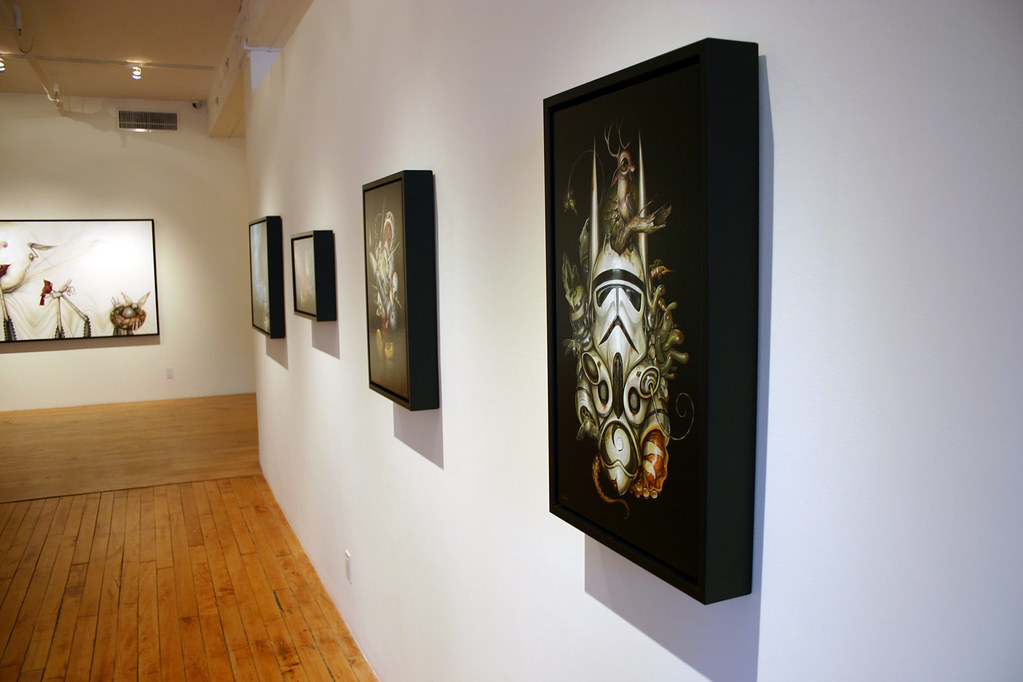 The traditional context of the ‘still life’ in art history was the use of uncommon objects, such as flora and fauna, created in deliberate arrangements according to the artist’s aesthetic purposes. This deliberate choice of composition often allowed for subliminal messages to be conveyed through the work, often centered around religious or allegorical symbols. Interestingly, Simkins takes this traditional medium and creates compositions in which the essence of the ‘still life’ is present amongst the fantastical characters and settings that Simkins has conjured into negative space of the bare white or black backgrounds. 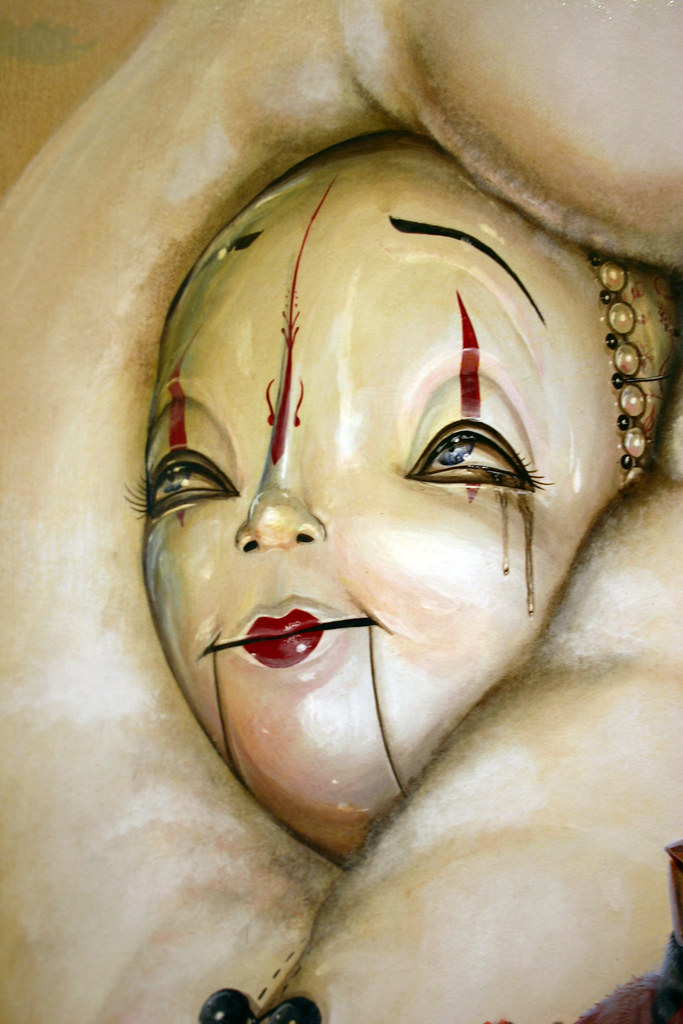 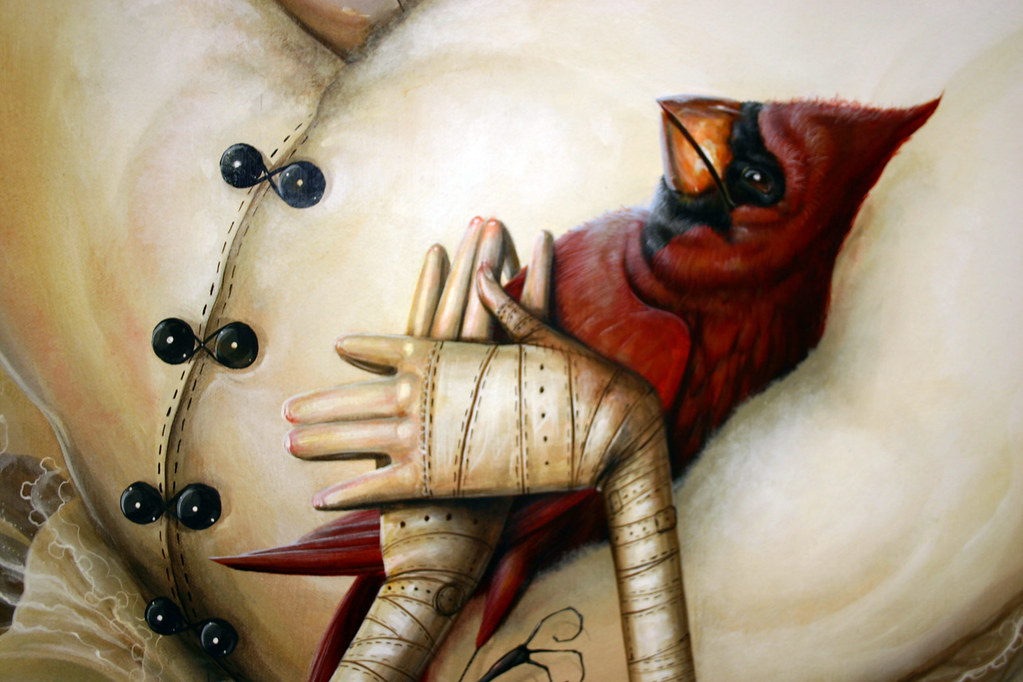 Armed with acrylic and a fantasist sensibility, Simkins has bent the rules of both the “still life” as an archetype and the natural roles of the animals he has imagined into his settings. The hybrid creatures often take on the skins or shapes of other animals, creating a blend of species. A pillowy, doll faced woman embraces cardinals with sets of long limbed arms in “ Just Can’t Let Go”. In the background, a pair of whales drift through the pastel colored sky. By reassigning the natural instincts and functions of people and animals, Simkins furthers his fabulist agenda, exploring a specific dream world that echoes past works. 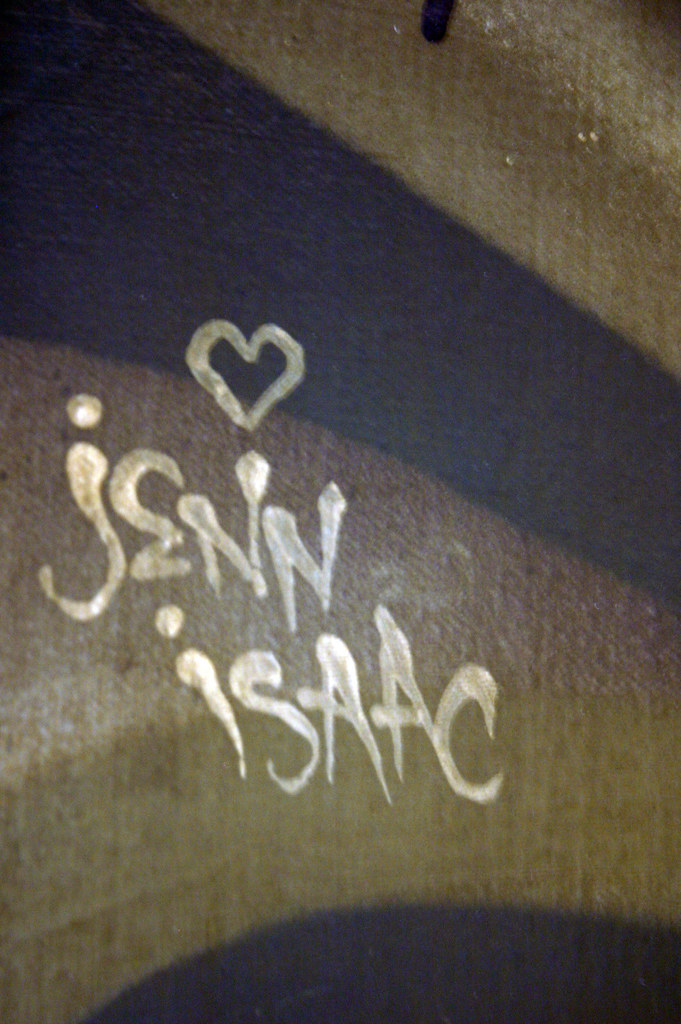 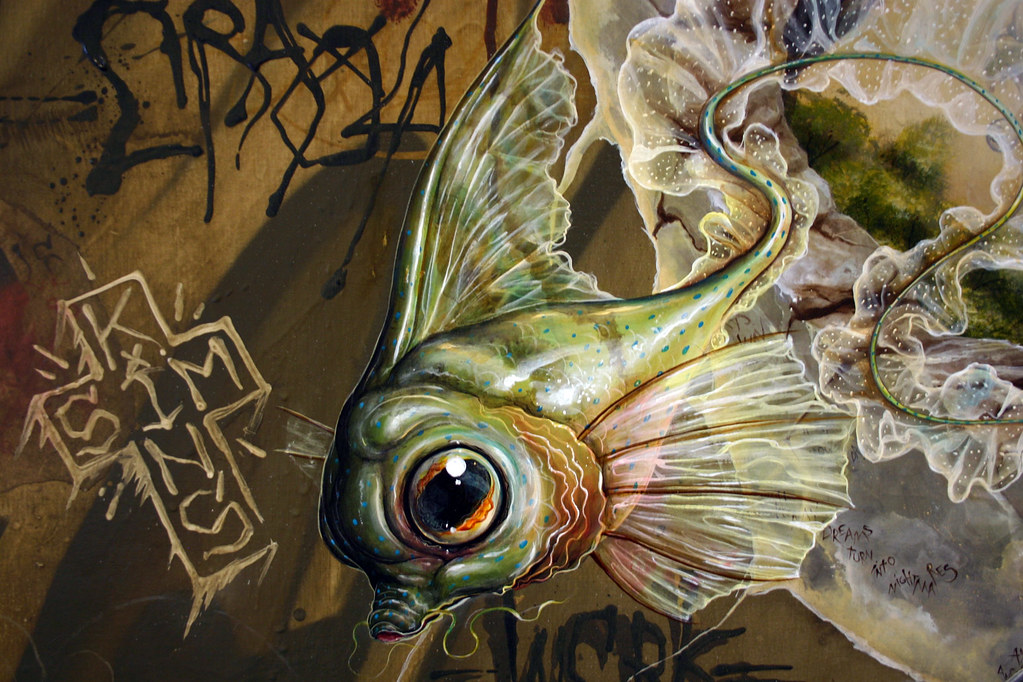 As a master of the acrylic medium, Simkins work often appears to have been wielded with the hands of an old world oil painter. The compositions are balanced within negative space, giving the feeling of an orbiting or floating within lightness or darkness. The only painting that has a distinct notion of a setting is ‘The Outside’, an homage to Simkins days of wielding a spray can in the streets to convey his messages and ideas. A hammerhead shark appears suspended over a graffiti colored backdrop in which secret text is hidden in the scrawling fonts on the crumbling wall. 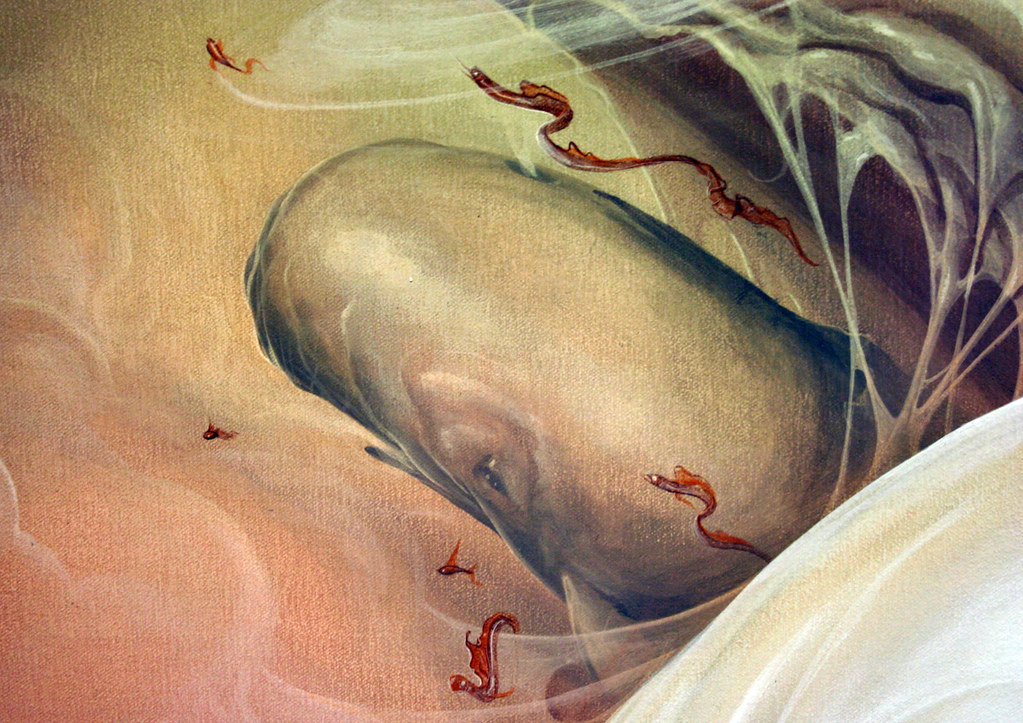 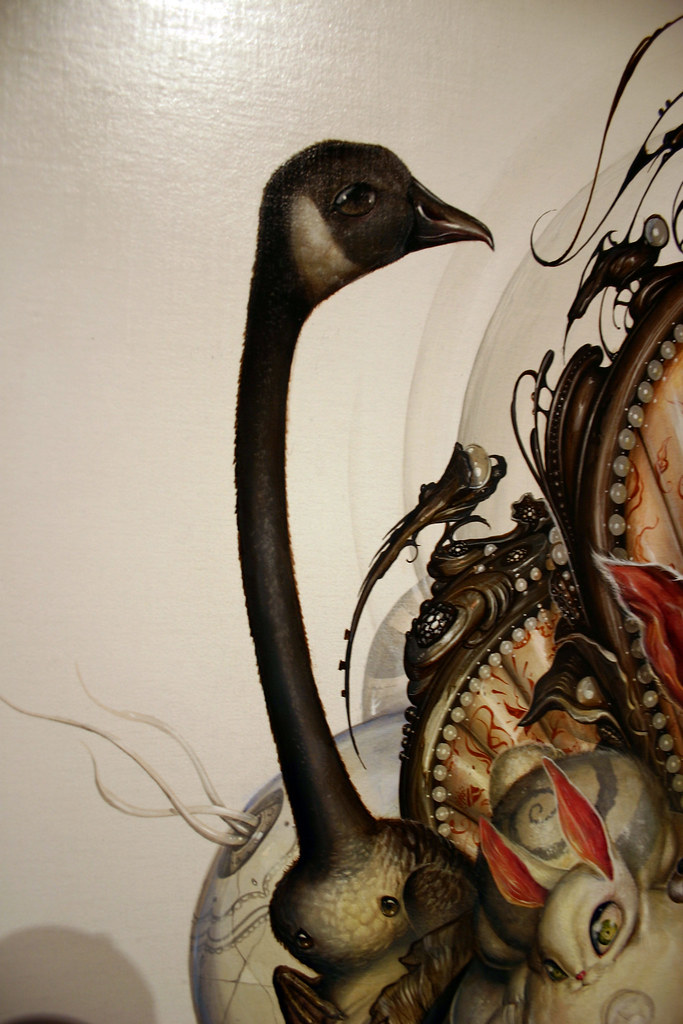 The inclusion of aquatic creatures comes from the inspiration garnered by a recent trip to Hawaii. Many of the fish are seen contained within fishbowls while bulbous sea plant life bloom from teacups. Although these “containers” aren’t the natural setting for them, it’s inclusion resonates with the title. The fish are within the fishbowls but outside their natural habitats. This paradox often repeats itself within the body of work. Regal and emotive animals take on human characteristics and sit with perfect posture on antique furniture fit for royalty. By placing human objects in close proximity to animals, the work is suggesting a further meaning of the human experience. The traces of humanity manifest only as evidence of our existence; furniture, graffiti, tea cups and references to popular culture (Star Wars, Mickey Mouse, Tim Burton) in the work, giving an eerie feeling of doom that only becomes compounded with the dark nature of the “black paintings” and their prophetic resonance of the recent oil spill and it’s unknown effects on the ocean and it’s sea life. 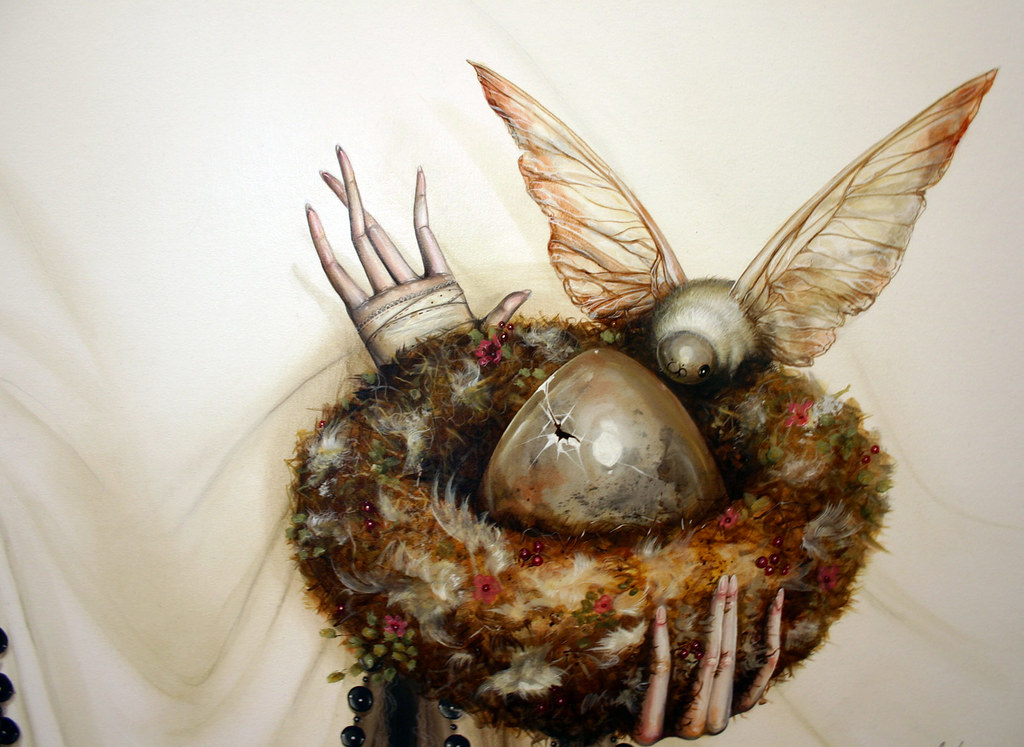 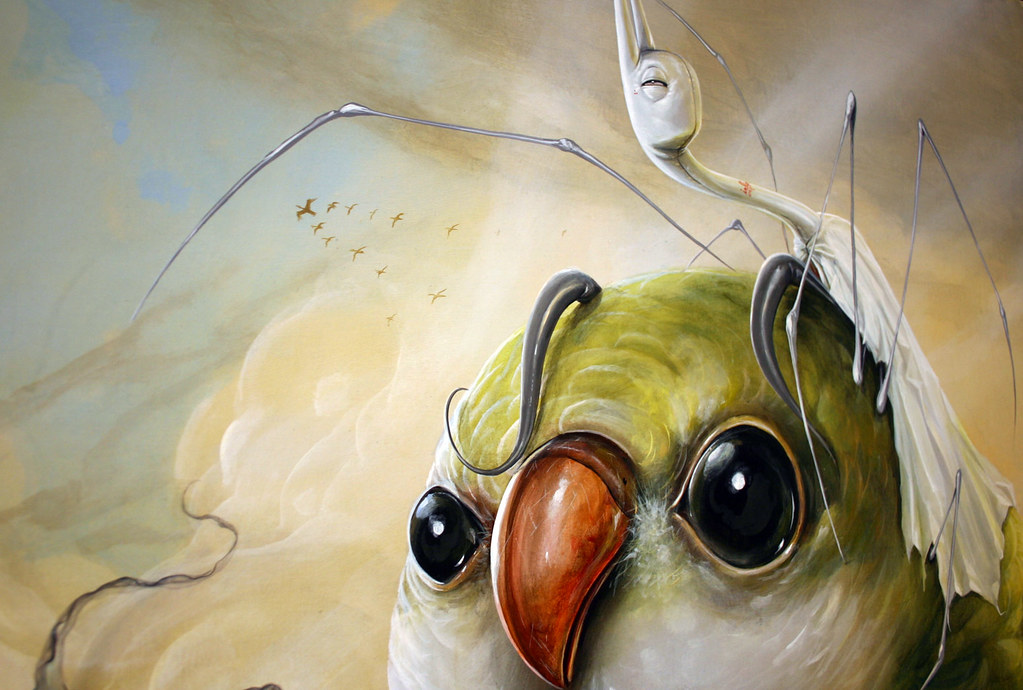 The work as a whole is a balance of both light and dark, the exploration of the “inner” life as manifested by the “outer” experience of creating paintings. While paying close attention to natural life and objects in the still life tradition, Simkins has imbued the work with his own set of symbols within his dreamy environments. These recognizable symbols mark the signature of an artist who has garnered critical acclaim and who will continue to surprise his audience with his renderings of his surreal representation of the unconscious landscapes. 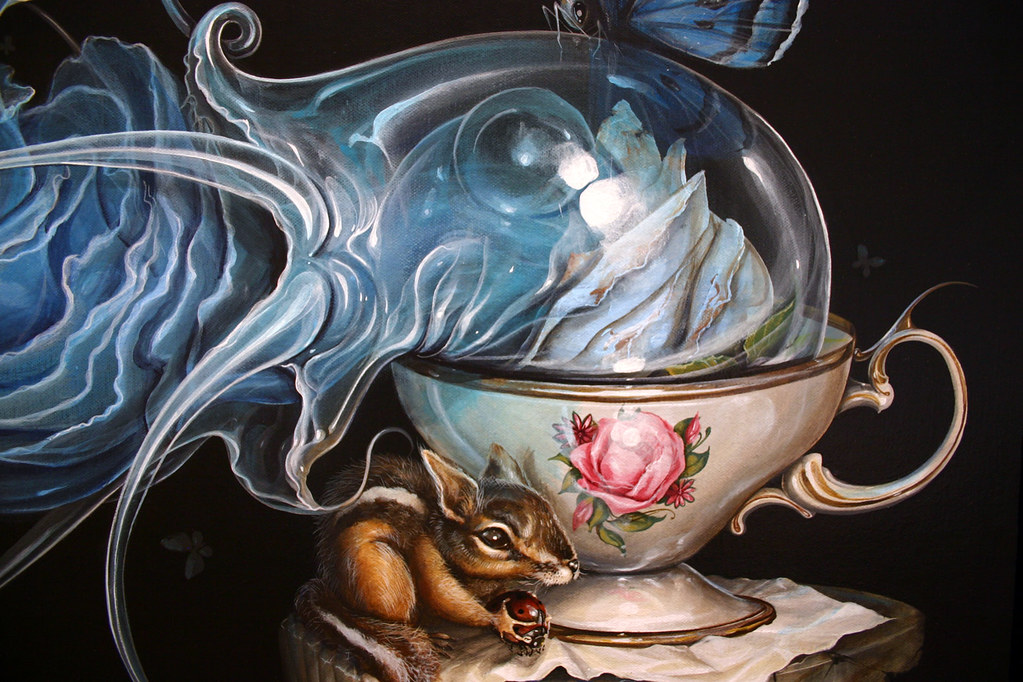 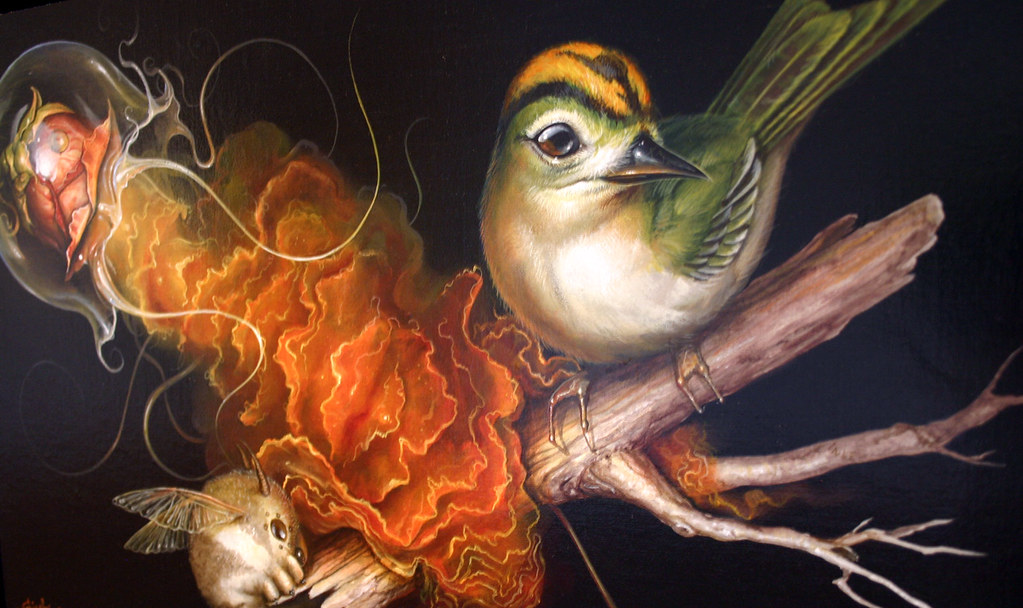 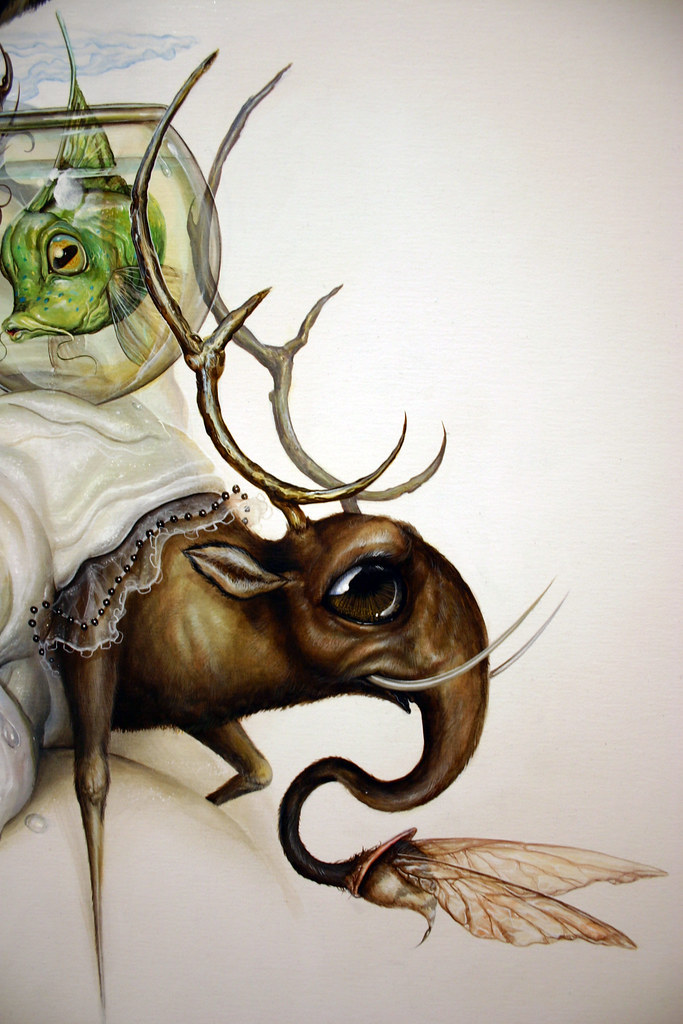 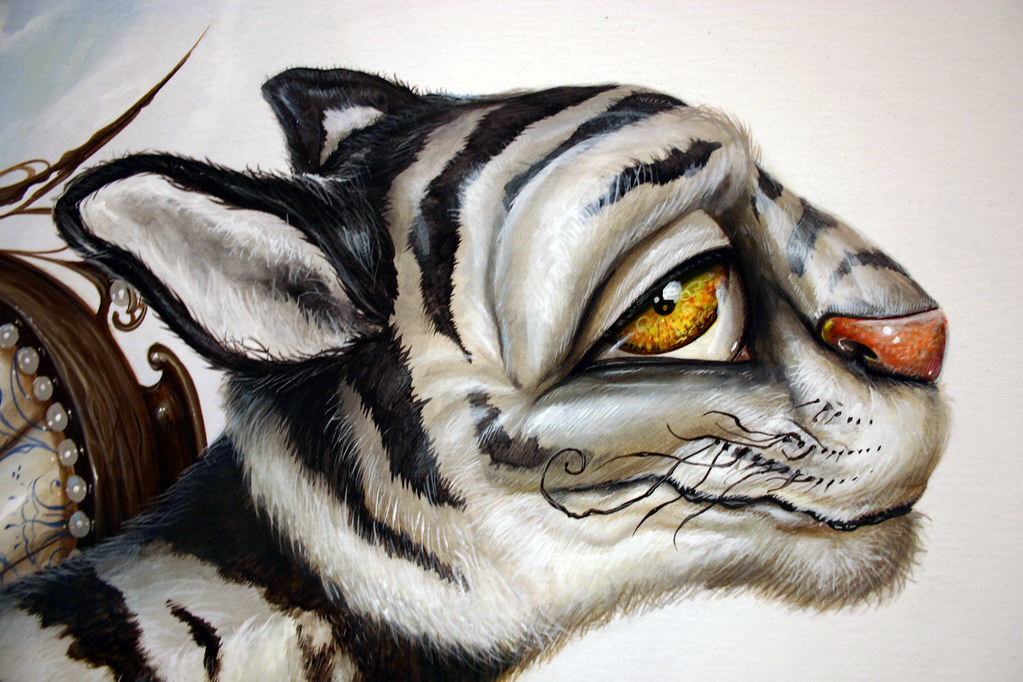 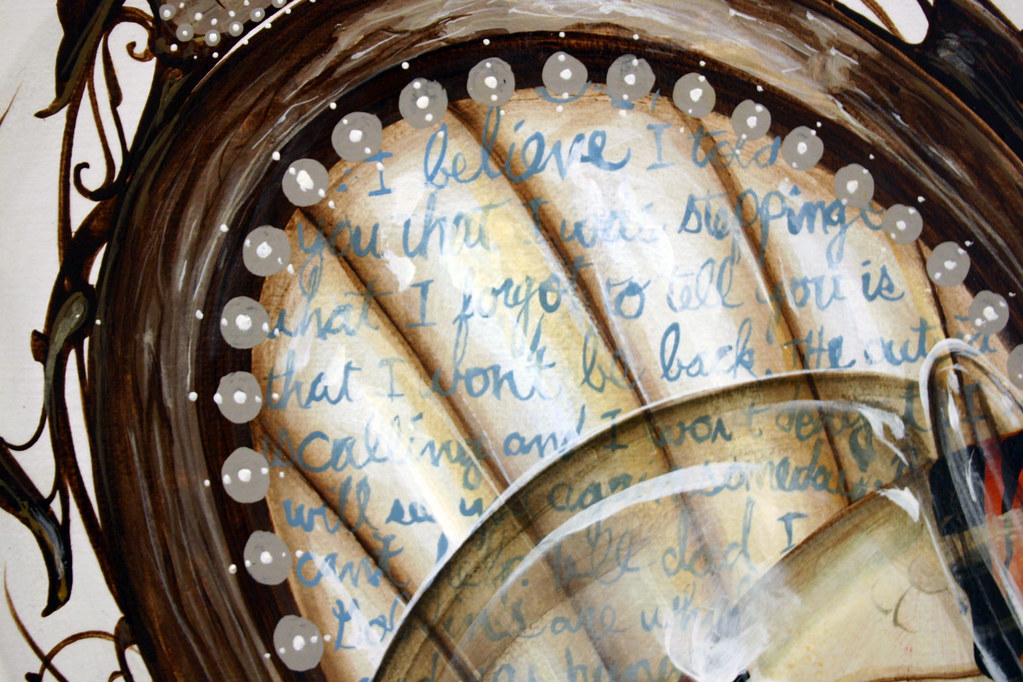 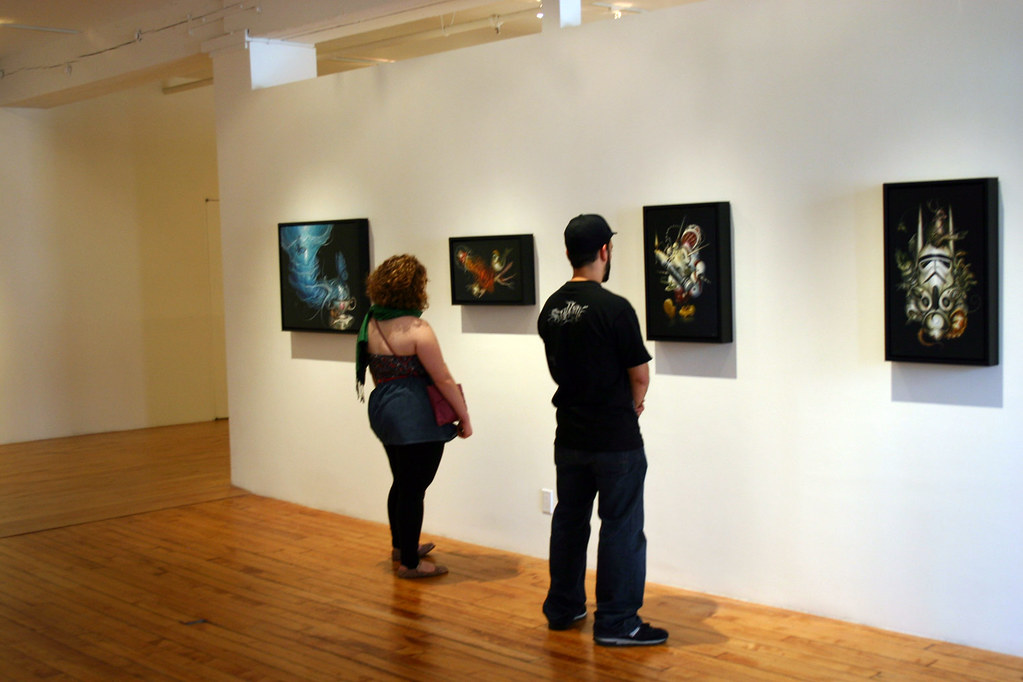 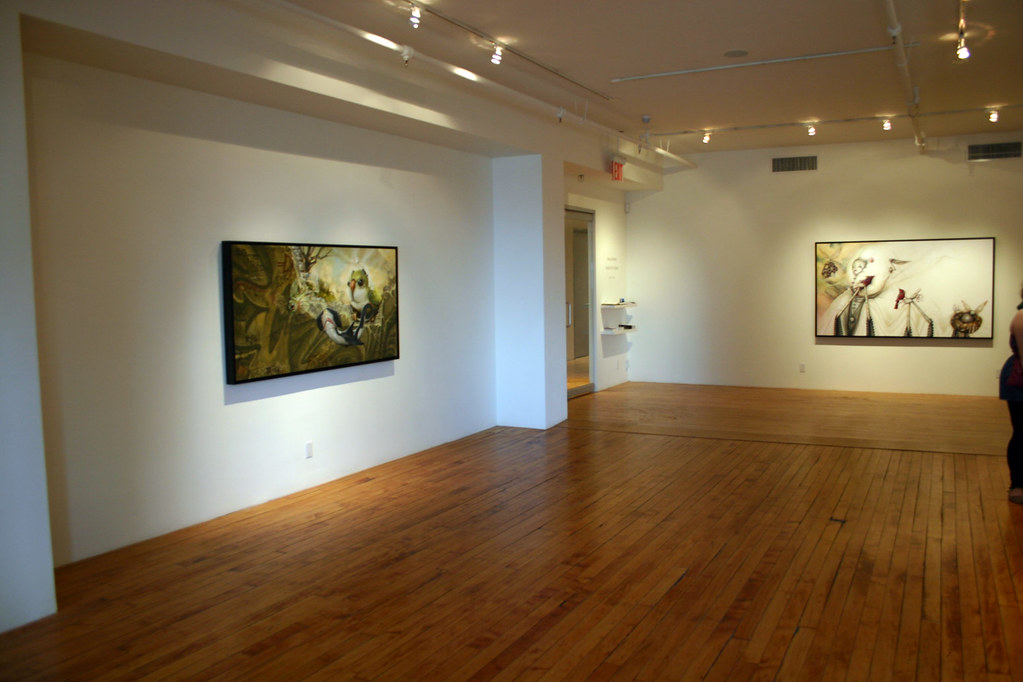 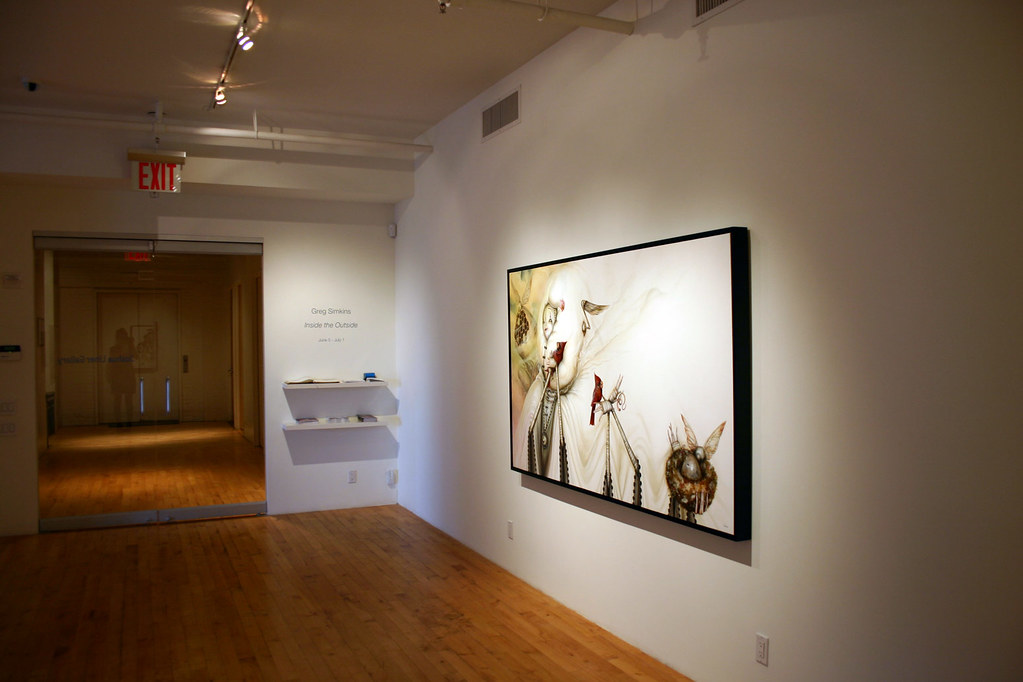 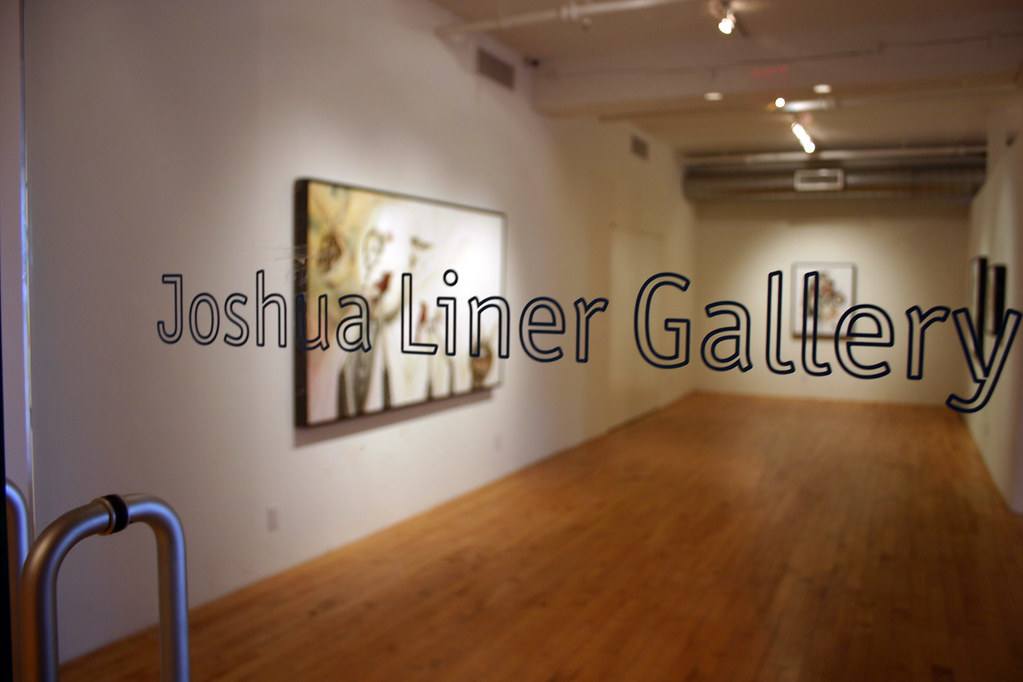