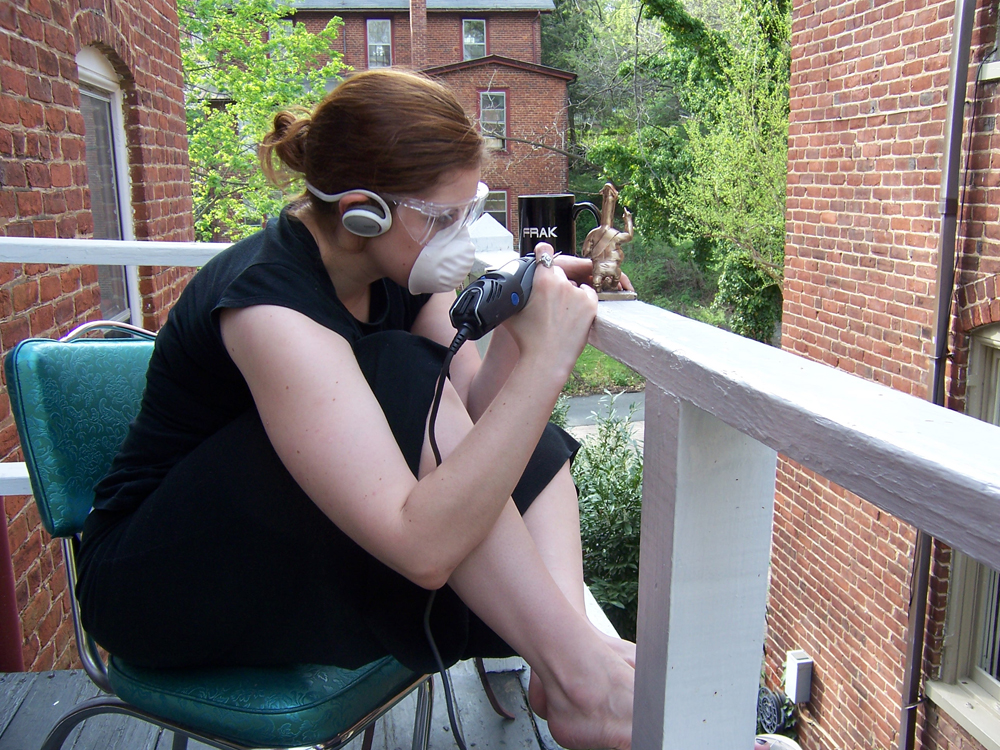 The first time I saw Allison Sommers‘ work I was amazed at how beautiful the creatures she painted really were. At first glance they almost appear to be partially inside out, with their internal organs poking through or splayed out on the floor. But as I got closer to each piece and stared a little longer, I found these creatures to be quite charming with their pleasant smiles and comically disproportionate features. Now when I visit her work online, I stay for a long time staring at these creatures that beg to be devoured with your eyes.

Here’s how Allison explains her recent body of work for her upcoming solo show at Thinkspace Gallery on May 7th. “In these works, I want to engage with the metaphor of Schlaraffenland, the world of plenty, to explore the facets of gross abundance and to complicate what it means to take pleasure in the flesh. In Schlaraffenland, everything and everyone is part of a grotesque banquet of plenty, and consumption of others is not a transgressive act but rather a necessary engagement
of the world around them.”

Schlaraffenland will be Allison’s 3rd show at Thinkspace Gallery, but her first true solo effort. For years Thinkspace has helped launch the careers of emerging artists and has risen to the top of a sea of really cool LA galleries. Schlaraffenland, Thinkspace’s 2nd show in their new digs in Culver City will be no different. This will be a show that catapults Allison Sommers to an even sweeter level of success. 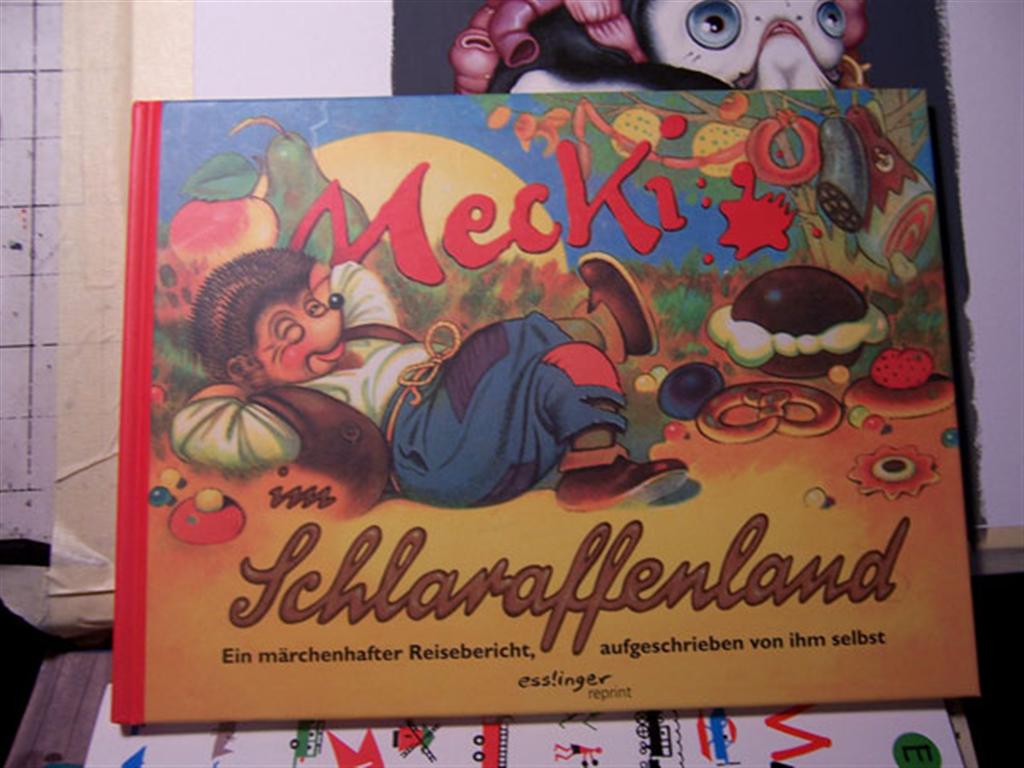 How has your work evolved from your last solo show?

About halfway through “A Brief History” it occurred to me how apt the metaphor of Schlaraffenland was for my work, and how well my long-necked creatures fit into it. Schlaraffenland is an old German conception of the land of milk and honey, where everything, specifically food, is provided for and the peasants spend their time lazing around rather than working. 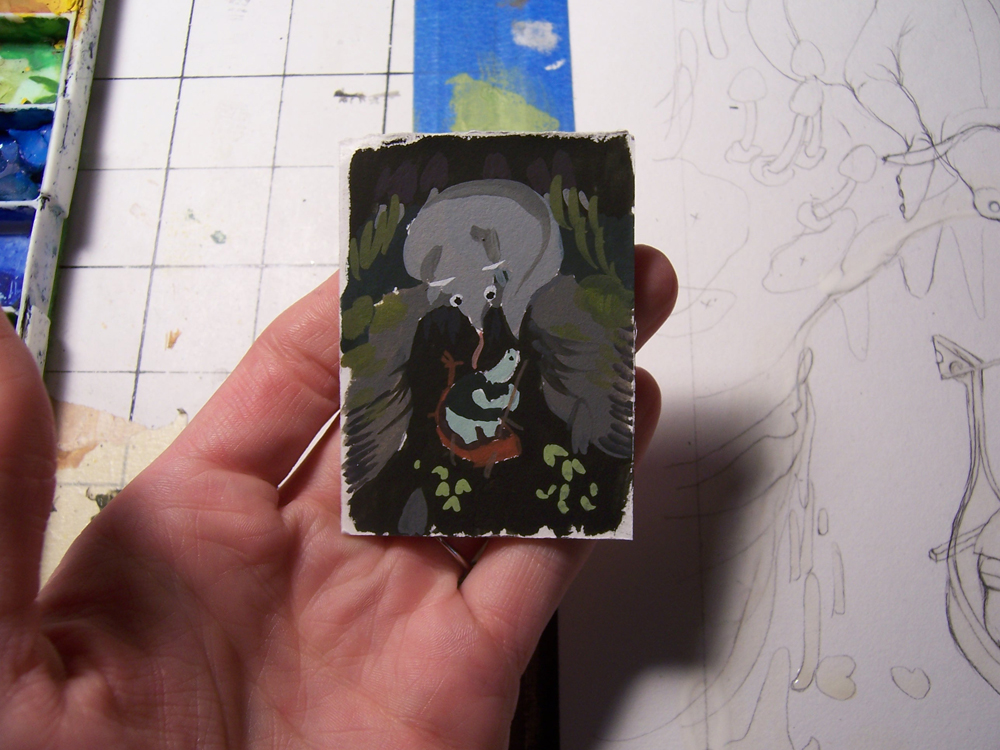 The German take on that concept must be a carnivores delight, given the amount of happy animal innards and meat things that appear in your new work?

Being an old German tale, it also has delightful, cruel details such as pigs walking around with knives stuck in their backs, ready for the carving, and cooked geese that fly right into your mouth. I wanted to incorporate that plenty with the consumption and gluttony tinged with weird eroticism that I already was exploring with my work, thus Schlaraffenland. 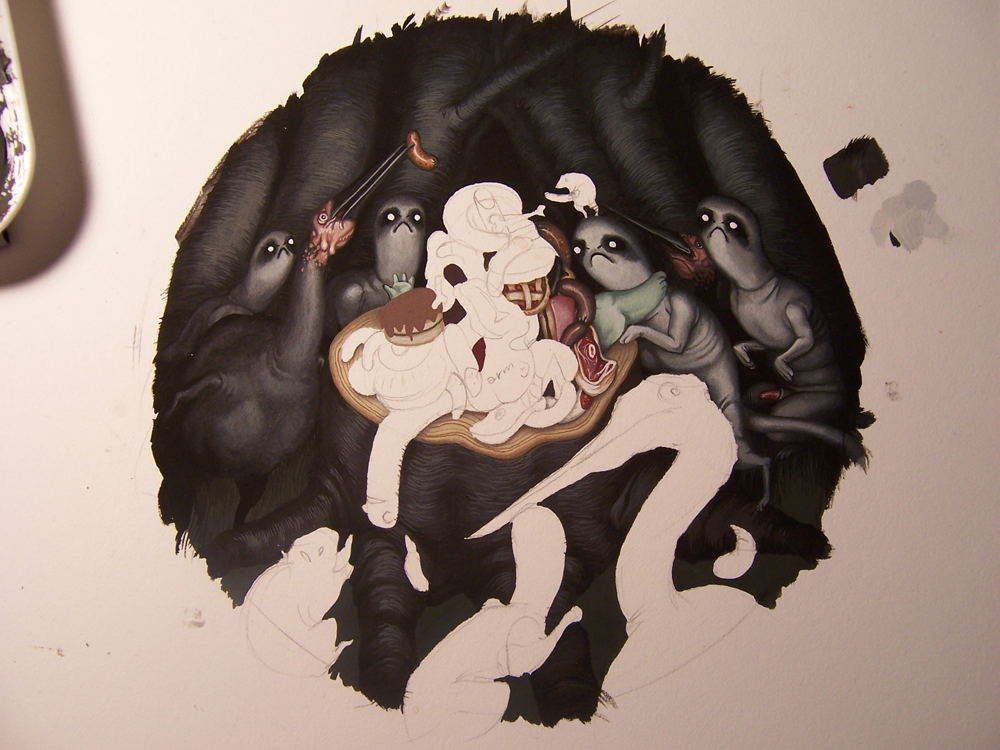 Where do your creatures come from?

All my favorite creatures seem to have started life as background filler in paintings, and were interesting enough to give recurring roles to until they formed their own personalities and lives. 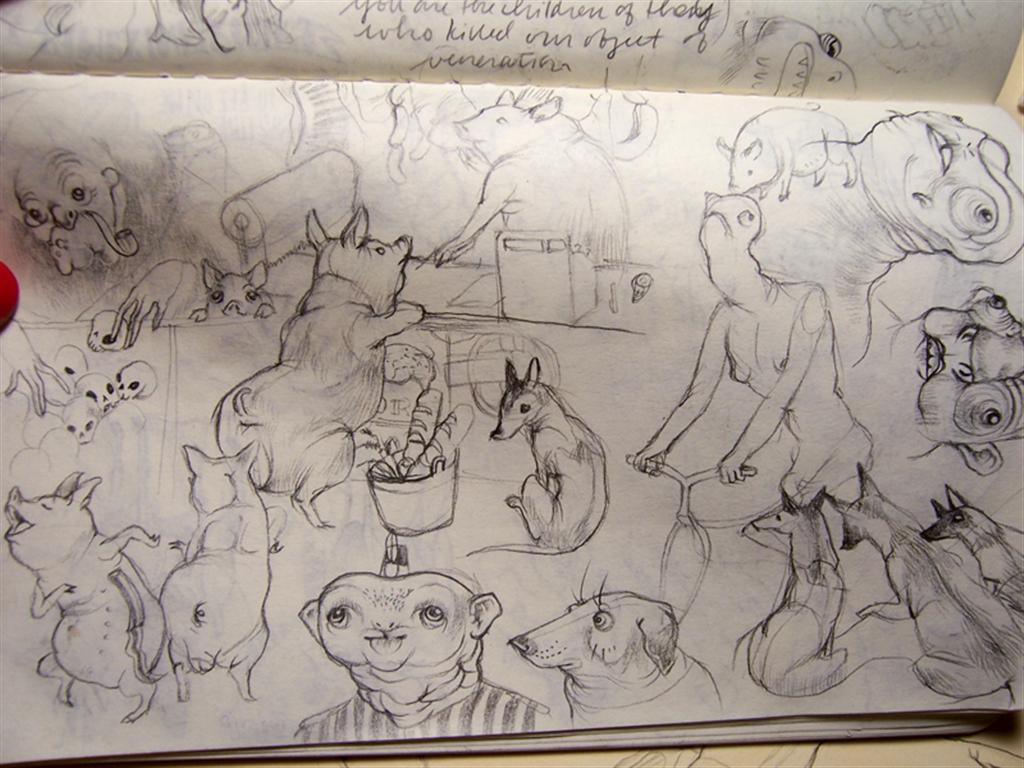 Can you remember whether these creatures appeared in your imagination as a young girl exploring art?

I’m not sure that these forms themselves appeared in my childhood work, but the method of deriving them definitely did. I was always trying to draw existing animals as best I could, and once I knew I could draw them, they would start getting a little less realistic. The long-necks I paint now started as a sloth I drew over and over until it was something else. A lot of my fat 4-legged creatures have the rear and back legs of a pug we had when I was a kid. 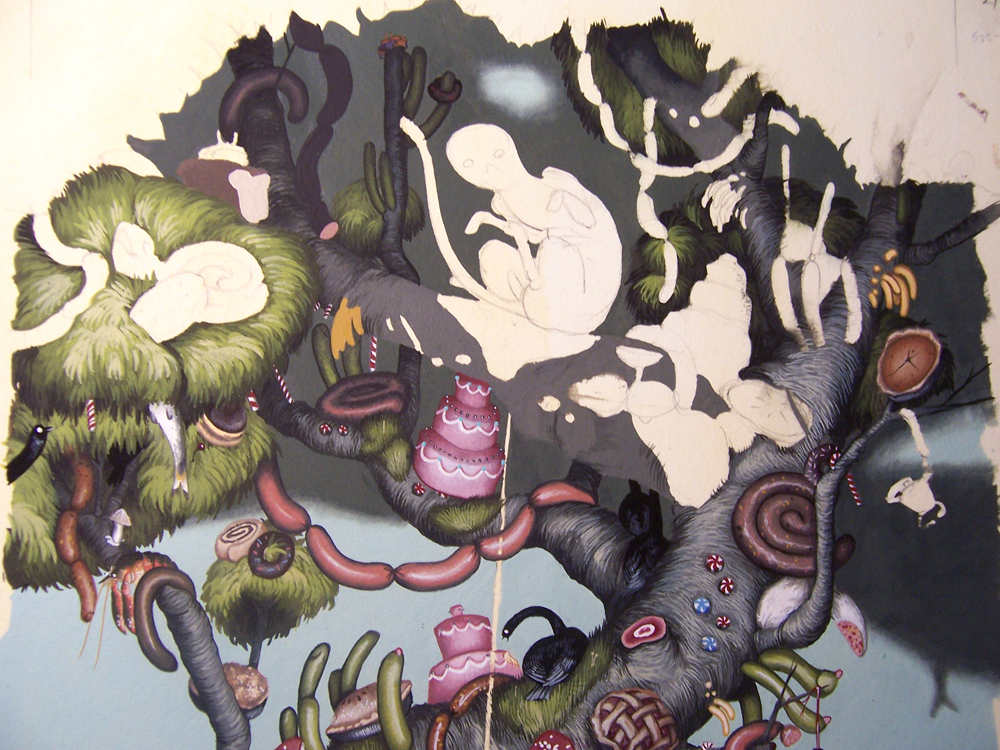 What do you do to spark your creative fire?

When it comes to inspiration, I’m still dependent on existing animals as a jumping-off point for the physicality of the creatures. As for their scenarios, I’m open to absolutely everything for inspiration, but lately have been really drawn by children’s literature. Right now I’m reading a book called The Last Children about nuclear holocaust. 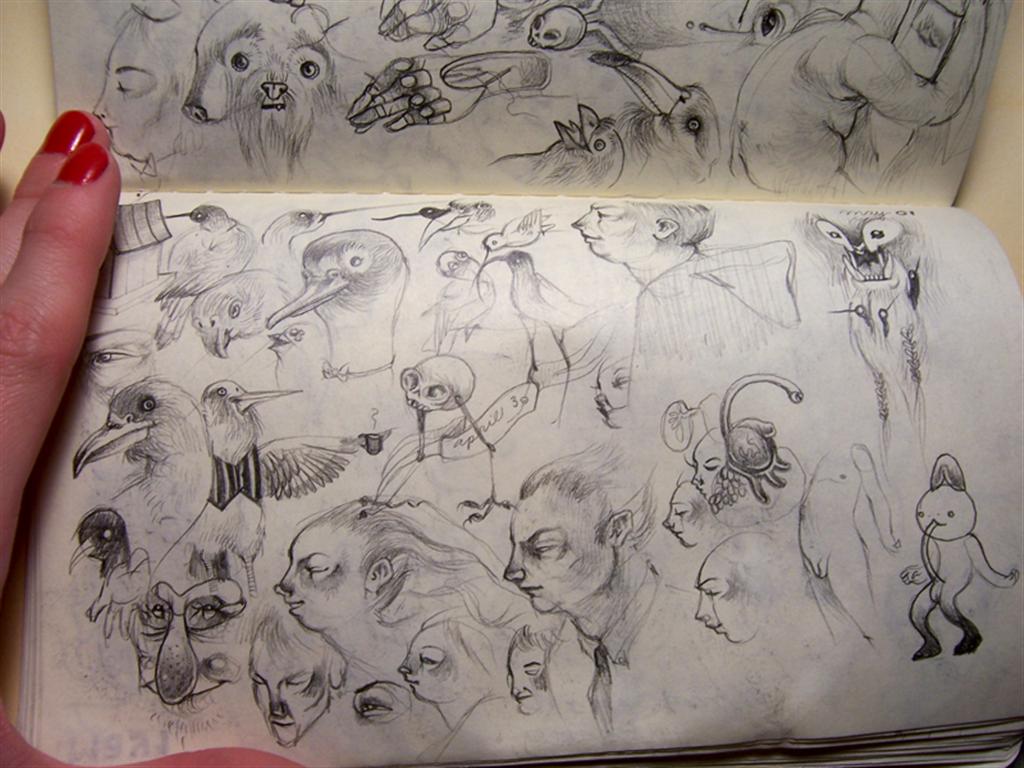 What would you like people to know before they come and see your work?

I guess people should know that the paintings do make fun of themselves in a way, and they’re meant to use their most puerile imagination to suss out the meanings sometimes. 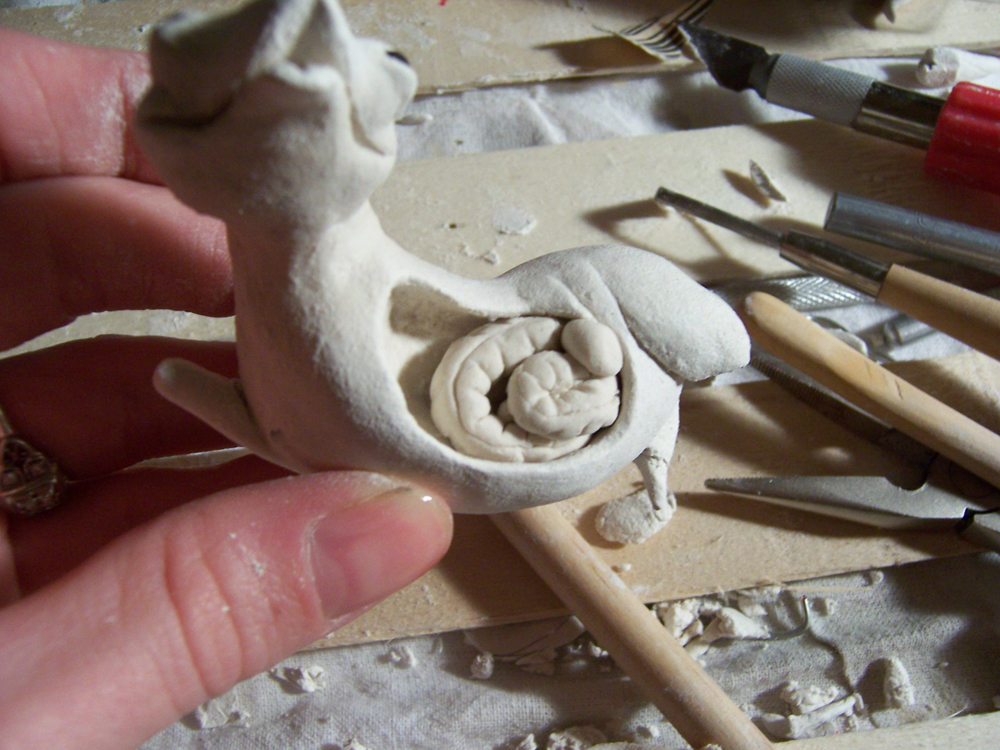 Besides paintings of your long necked, four-legged creatures, what other mediums will be represented in this show?

There will be a few paperclay sculptures, a cast bronze, and resin multiples cast from the bronze. There will also be an organic installation that will bring a bit of the yuck out of the paintings and into the gallery space and “real life.”

For further reading, check out another interview with Allison our friends over at Erratic Phenomena did here.