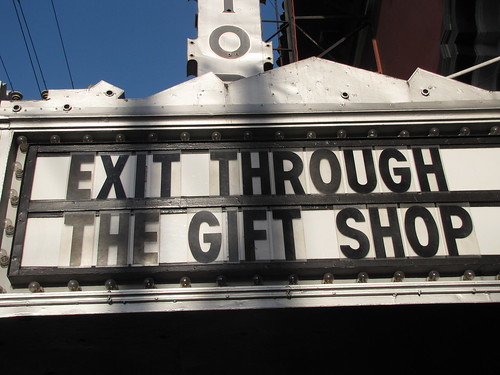 Hi Fructose attended the debut screening of Banksy’s Exit Through the Gift Shop last night at the Victoria Theater in San Francisco’s Mission district. Following the recent Los Angeles and New York screenings, anticipation was high based on early positive reviews. Banksy, identity unknown, is one of the UK’s, if not the world’s, foremost contemporary/street artists. From his museum infiltrations and Separation Wall paintings to his more recent tour of New Orleans and his Bristol Museum show, Banksy has continually pushed the boundaries of the technicalities and concepts of street art and is one of the artists who’s secondary market demand almost single-handedly skyrocketed street art auction sales results to blue-chip level prices. Needless to say, he’s a legend. As such, expectations are, and will be high for fans of street art. Review of the film and a potential Banksy sighting below. 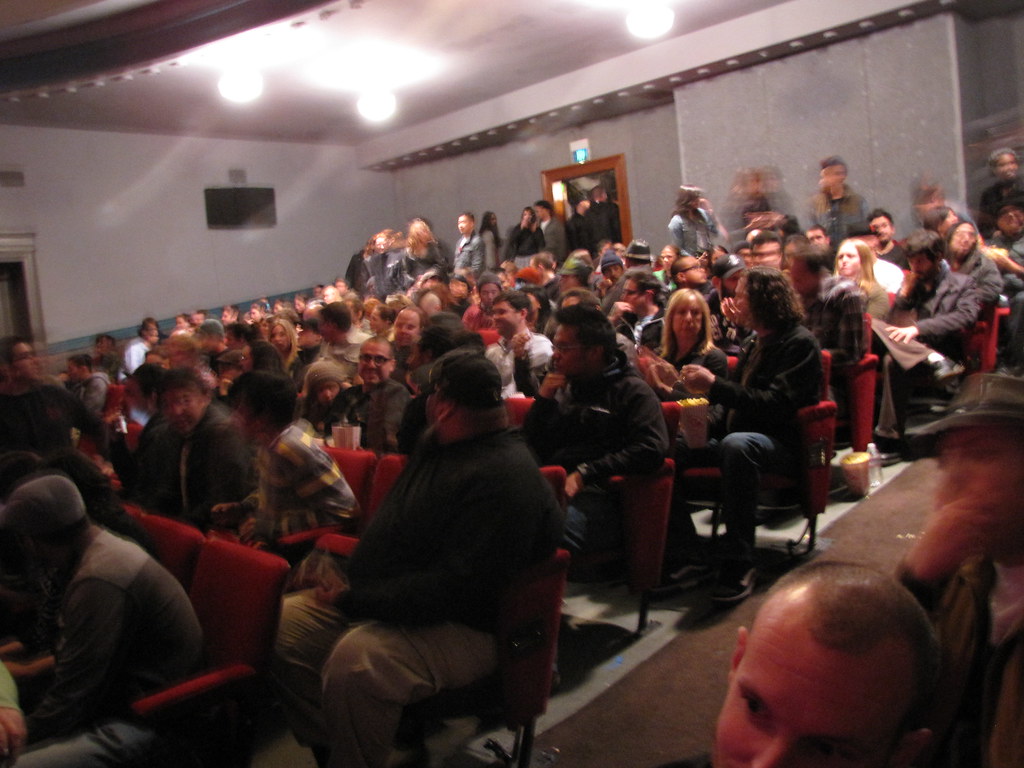 Upper Playground and Wooster Collective hosted an intimate preview of the film at the Victoria Theatre in San Francisco’s Mission District. Along with a few lucky fans, attendance consisted of a veritable who’s-who of SF art scene stalwarts. Artists Alex Pardee, Jeremy Fish, Zoltron, Jesse Hazelip and Eddie Colla were all spotted, and from the blogosphere: Meighan O’Toole (or at least her camera) was in the house on her SF vacation; the Trippes were present as well, Tecate’s ready. Enough of the shout-outs and name dropping however, let’s talk about the movie shall we? 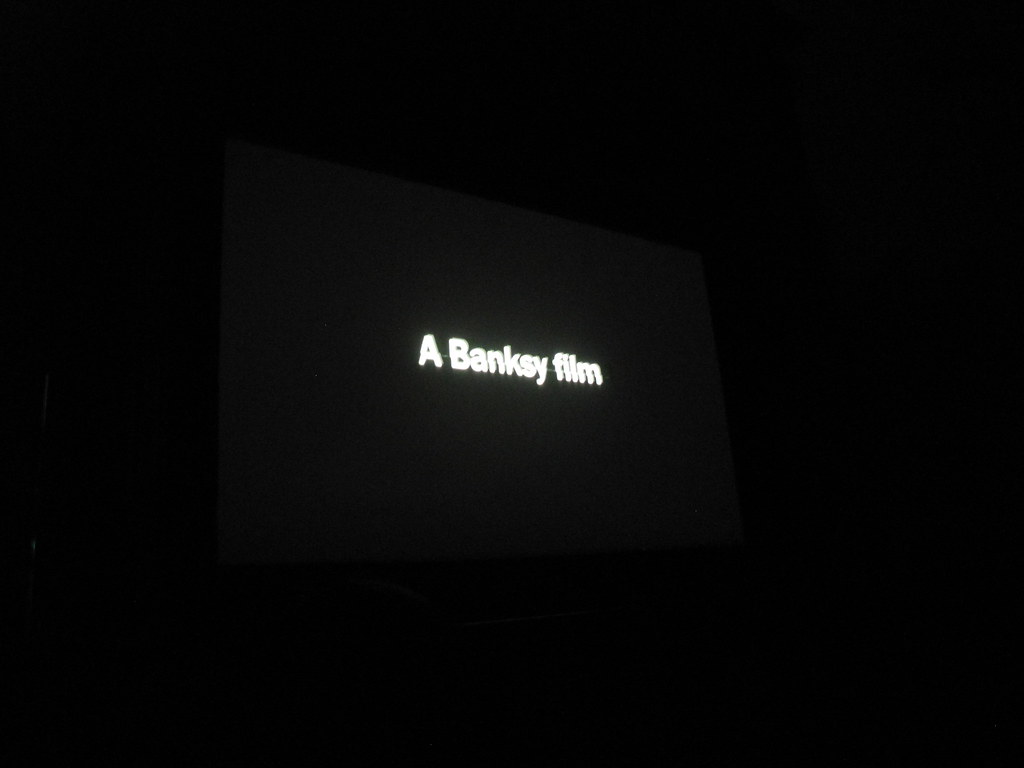 As you can see, Exit Through the Gift Shop is a Banksy Film. It is however, not a film about Banksy. Technically speaking, it’s a film about a documentary about Banksy, that’s actually about the filmmaker of said documentary and is in the end, directed by Banksy, starring the original filmmaker. Confused? You should be. The basic premise of the film is this: several years ago amateur filmmaker and vintage clothing store owner, Theirry Guetta, discovered the growing world of street art through his cousin, artist Space Invader. As Guetta began to document his cousin’s art installations on the boulevards of Paris, he slowly became more and more entrenched in world of (then) underground street art. As his collection of footage grew, so did the number of artists he met. Shepard Fairey, Andre, Buff Monster, Swoon, the list goes on. Eventually, Guetta manages to encounter the one missing link to make his “ultimate street art movie” complete: Banksy.

What follows is an exploration of the relationship between a bumbling cameraman and the world’s most renowned street artist. As the movie and their friendship progress, we see that Guetta has more and more footage, but in the end, no actual film. From there things take a twist… Banksy then becomes the film producer and Guetta his unwitting star. The film itself is actually a comedy, the star of the show, Banksy, plays a minor role compared to that of the theoretically silent camera, Guetta, or Mr. Brainwash as he’s now known. As a documentary it provides not only rare older footage of some of street art’s best and brightest but also gives a captivating look into the sudden rise and success of an artist (Guetta/Brainwash) who isn’t really an artist at all…

Whether or not you’re a fan of street art, or have even the slightest idea as to who Banksy (or Mr. Brainwash) is, odds are that you’ll find something to appreciate in this highly intriguing, intimate and entertaining story. Highly Recommended. 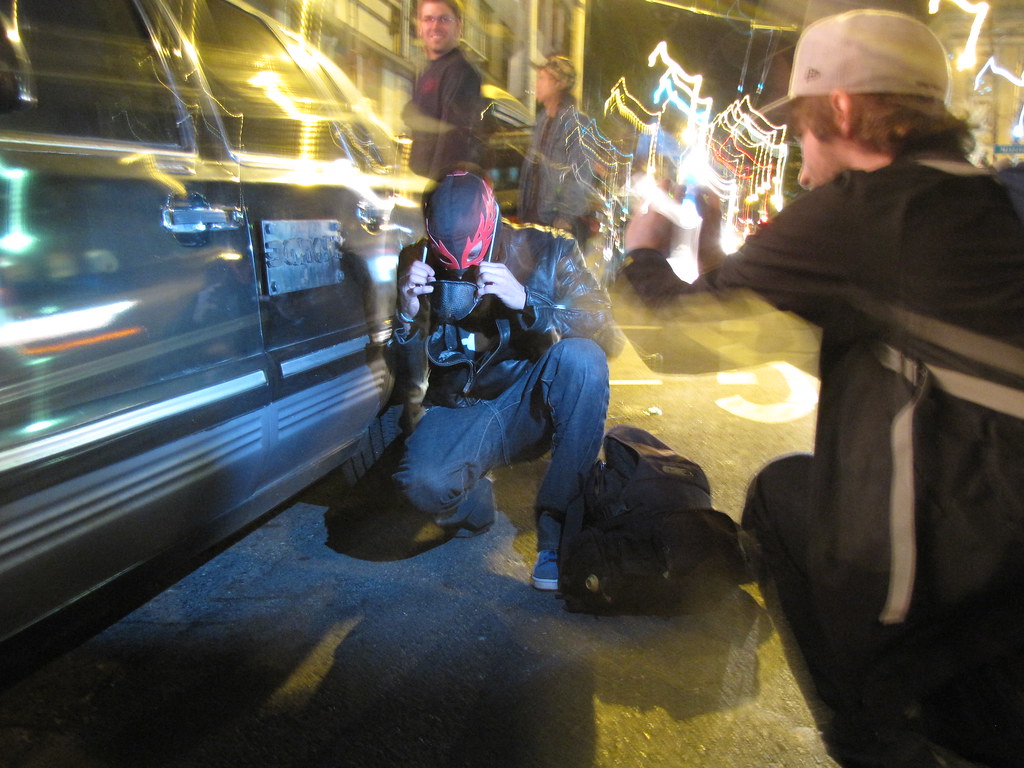 Immediately following the film (which ended with an unanimous round of applause) a masked individual strolled up to the gathering crowd outside the theater and calmly attached a metal plate to a car, emlazoned with the name Banksy on it, for a quick photo op before disappearing into the night as quickly as he came. Sources, who will remain anonymous, have hinted at the possibility of Banksy being in the Bay Area, not an unlikely situation as his work was recently spotted (and quickly removed for resale) in Los Angeles. Official confirmation on this particular person’s identity seems unlikely, but to some degree, that’s the beauty of Banksy. 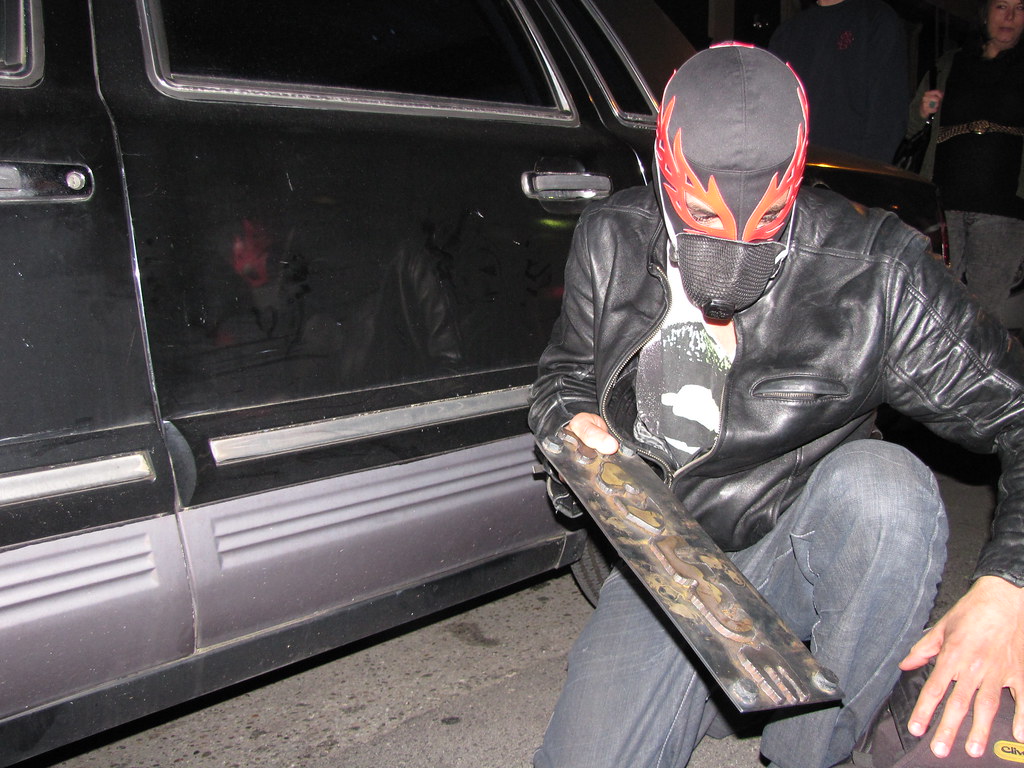 Much as the film leaves you wondering whether or not to love or hate Mr. Brainwash, admire or recoil in disgust at his successes, the cult of Banksy’s personality is oddly enough made stronger from his anonymity. The person pictured above may or may not be Banksy, just as Mr. Brainwash may or may not be an actual artist. Or as many conspiracy theorists have postulated, Banksy and Mr. Brainwash may or may not even be separate people. Throughout Exit Through the Gift Shop, you’re left slightly confused as to who the joke is on. Banksy? Brainwash? The entire institution of art? Well, perhaps the joke’s on us, the viewer. Knowing Banksy, that doesn’t seem so far fetched after all.

Anyhow, check it out for yourself, it’s worth it.

The movie debuts this weekend at the following locations: