Damon Soule‘s most recent body of work for “Modus Alone” continues his exploration of geometry, color and space. What makes this work different from previous showings however, is its focus on the metaphysical aspects of these perceptions rather than the material. As an extremely pragmatic and empirically minded person Damon’s work most often centers on scientific themes, choosing to reflect on the complexity of technological, political, and social life in our modern times, rather than the esoteric nature of consciousness. In many ways these new works are more personal, as Soule, through the use of geometry attempts to gain a better understanding of the ethereal. 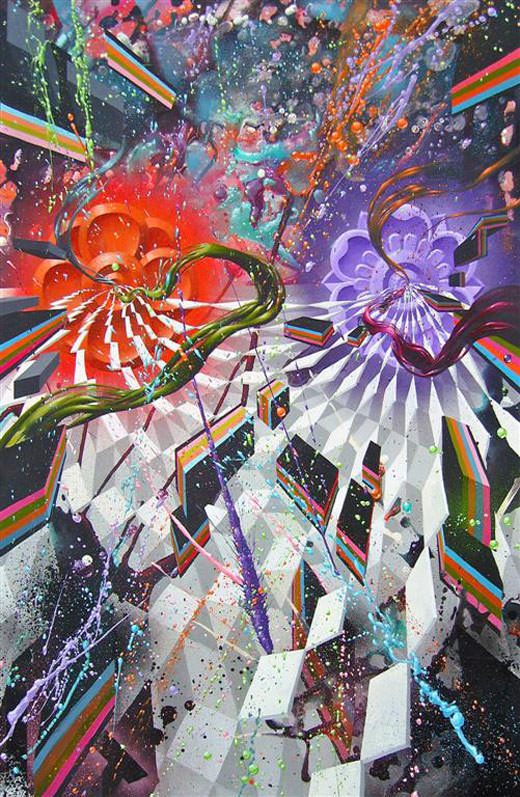 “The Unfortunate Nature Of Duality” 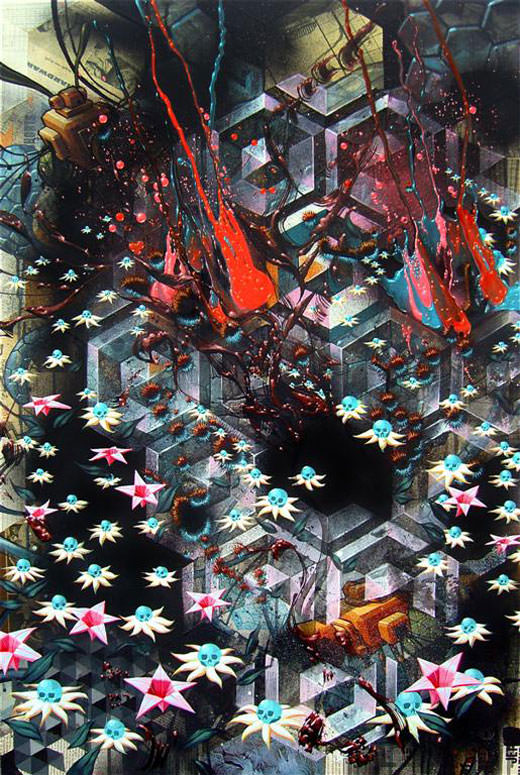 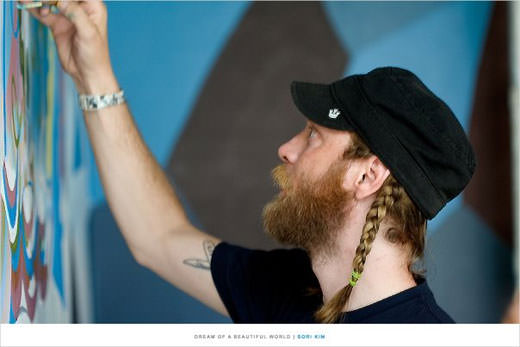 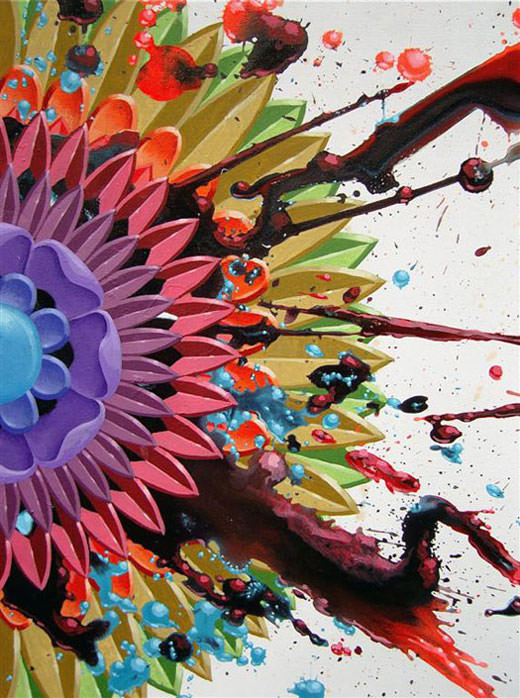 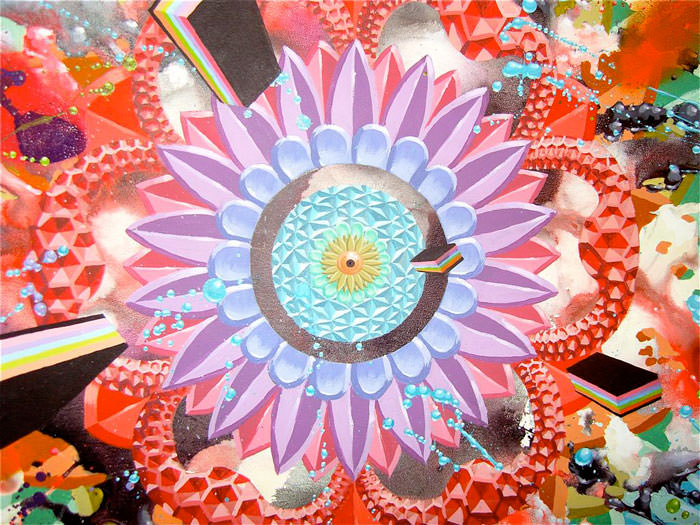 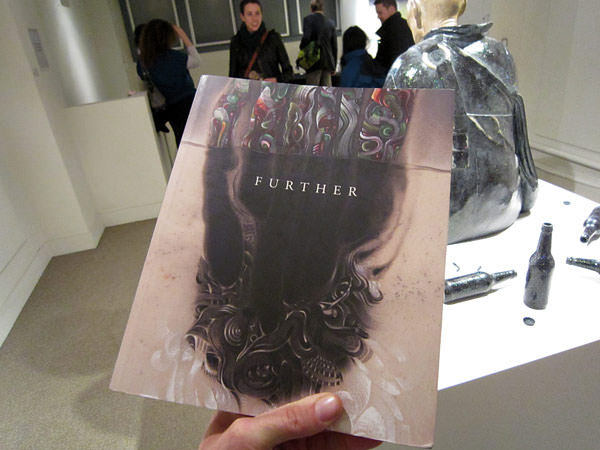 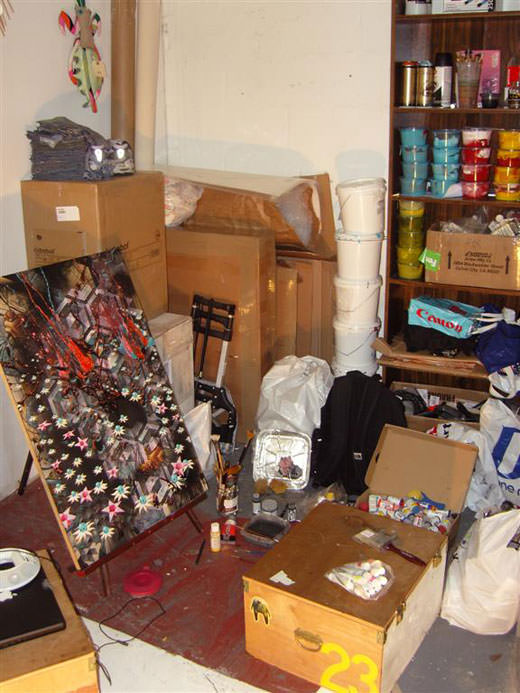 Andrew Hosner (AH): Please talk a lil’ bit about the general concept behind your new series of works for “Modus Alone.

Damon Soule(DM): If you condensed all the mass in the universe into a single sphere, eliminating the empty space, it would be no bigger than a basketball. There is virtually nothing but vibrations that make up everything we perceive. Even knowing this i have a difficult time wrapping my mind around the idea that there is something beyond the material. This new work is just an exploration of my feelings regarding that emptiness.

AH: As with past solo shows you’ve done, the show’s name is an anagram of your name. Please talk a bit about that.

Damon Soule: I’ve always thought of art making as a self-indulgent activity and the anagrams are kind of a way of mocking myself. Also I love word games.

AH: Their have been many well known pragmatists over the ages including the likes of John Dewey, Richard Rorty, and William James. What helped to form you overall pragmatist view on things? Did you take any philosophy courses while in school?

DM: Well, I only completed the 8th grade and the art school I went to didn’t offer any substantial academic courses, but I am familiar with John Dewey. For the most part my world view comes from observation and experience. As far as I know, that is in a nutshell pragmatism. I try to avoid dogma and prefer science for my explanations.

Damon Soule: Further is the third art book i’ve contributed to with some of my friends and the most inspiring artists I know. This time around, in addition to Mars-1, Oliver Vernon, Nome Edonna, David Chong Lee, and myself, we’ve also added Robert Hardgrave and Tomokaza Matsuyama. I think the string that runs through our work is the need to constantly evolve aesthetically and conceptually. There is a great deal of what I like to call a visual feedback loop. It makes things interesting.

AH: If you had an unlimited budget and time was not an issue, what grand artistic vision would you look to bring to life?

DM: I’ve always been fascinated by those outsider artists that do things like the Watts towers or the reef coral castle in Florida. I would love to build a home and turn that into my big vision. I hope I can make that happen at some point but I’m a bit of a wanderlust, so I may need to wait for that to cool off if ever.

AH: What do you consider your biggest overall influence?

DM: If I said anything other than American popular culture I would either be intellectually dishonest or have no self awareness. That isn’t to say I don’t have other influences.

AH: What’s your favorite thing about living In NYC? What do you miss most about SF?

DM: I like the energy in NYC but I really miss the community in the bay area. It’s a much tighter and more supportive scene.

AH: What have you got coming up in terms of shows after your solo show with us?

DM: Doing a solo at Fecalface gallery this year as well. Love those guys.