This year, Hi-Fructose will be taking a look at a few of the influential art galleries that showcase and support the art which we cover in the pages of our magazine. Our first foray leads us to New York’s Joshua Liner Gallery.

New York native Joshua Liner has carved a respectable niche in the gallery world, bringing innovative artists to the forefront of critical view for the last several years. His keen eye for talent has garnered him the praise of many a collector, curator and artist alike. But who is this person of interest, and what goes on inside that constant thinking machine of his? Join us as Nathan Spoor takes a few minutes to sit down with one of the art scene’s highly regarded playmakers. Complete interview and images from exhibitions here. 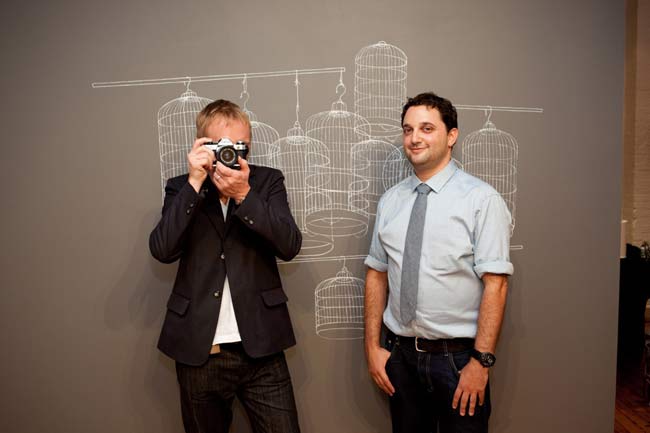 To begin, please tell us about where you’ve come from. What was life like growing up, and what things along the way helped form you into a collector or curator?

I grew up on Long Island, about 30 minutes outside of NYC. My friends and I used to take the train in come into the city all the time as kids for all sorts of things; such as buying Chinese throwing stars and getting ripped off trying to buy fake IDs when we were underage. I can also remember getting played at 3 Card Monty, even though we could pick the winner every time except when it was our money on the table. We were around 15 at the time, so being a bit young and naÃ¯ve explains that one. Needless to say I gave up on 3 Card Monty a long time ago. I actually saw someone with a set up recently, which I have not seen in a long time. It made me laugh and brought back memories.

Art was not a major influence in my life growing up but I did go to museums quite often. I used to love the American Museum of Natural History when I was a kid. The huge Sperm Whale and Giant Squid they have there always made me wide-eyed. The scale of both of those animals to a little kid is pretty intense. I also used to love going to the planetarium, so I guess I was kind of a science nerd when I was younger. 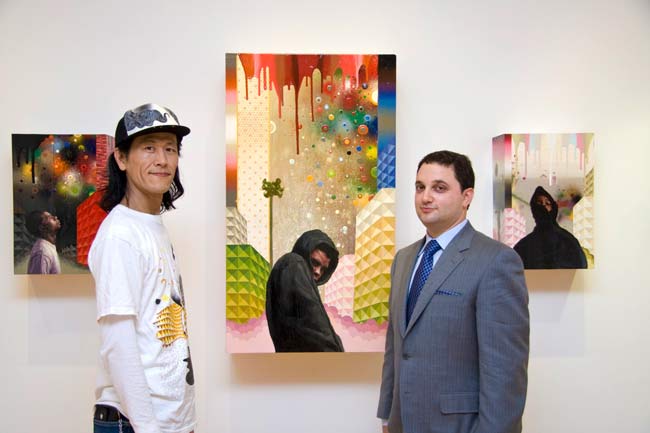 You’ve had different locations for showing artwork. What drew you to your current location, and could you go into what your perfect or ideal space would be like?

I always planned on eventually having my gallery in New York City. I grew up right outside of the city and there really is no other city like this in the world. New York is also the biggest and most significant art city in the world so it makes sense to be here for me. When I was in Philly there were a lot of artists I was speaking with that were not interested in showing there and were waiting for opportunities to show in NYC. I needed to come here and plant my flag when I did, as artists I was working with in Philly were getting offers from galleries in NYC. The timing was right for me to move here at the end of 2007, and we have been very well received and everyone showing here is happy to have a venue here to share their work. 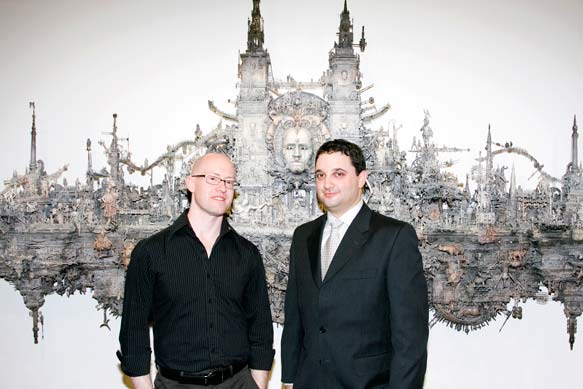 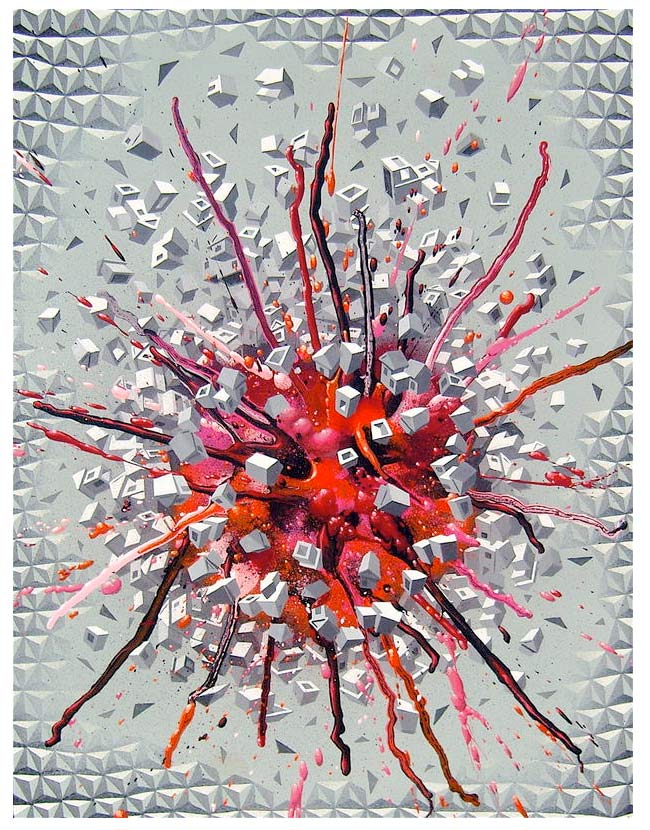 Do you create for your own interests, or do prefer to maintain your concentration on inspiring others to maintain their creative spark?

I don’t create any type of artwork or music so I would say that I am creative in my projects with the gallery. 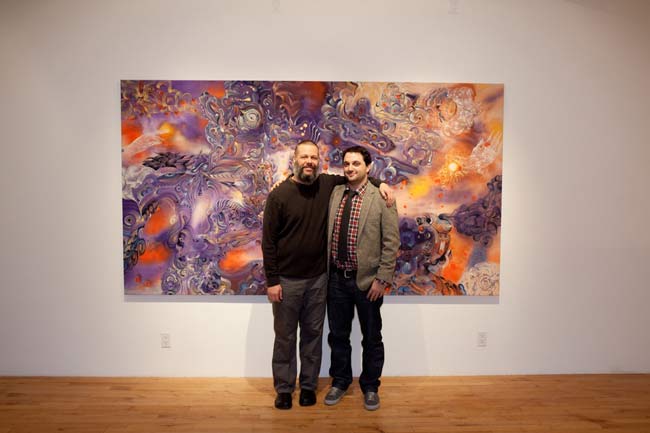 You are widely known for your particular eye for talent, to what do you owe your eye for curating?

I think that the group of artists I show is fairly diverse. While some galleries tend to focus on a specific genre or style I have done things differently with my gallery. People always ask about the work I show and why and I always reply with the same thing – that I show the work I love. I think by sticking with that motto I have put on some great shows with artists over the last seven plus years in which I have owned an art gallery. 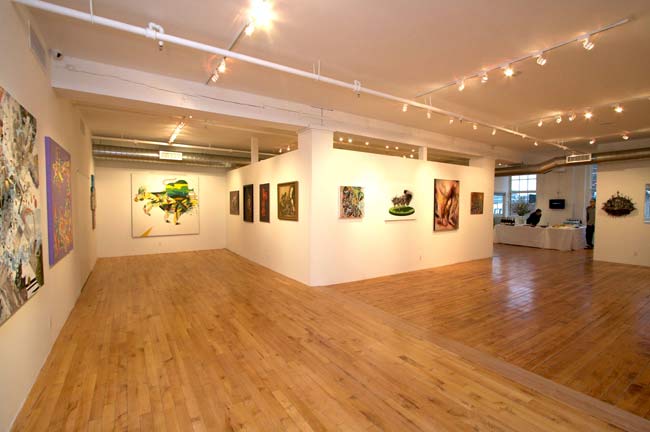 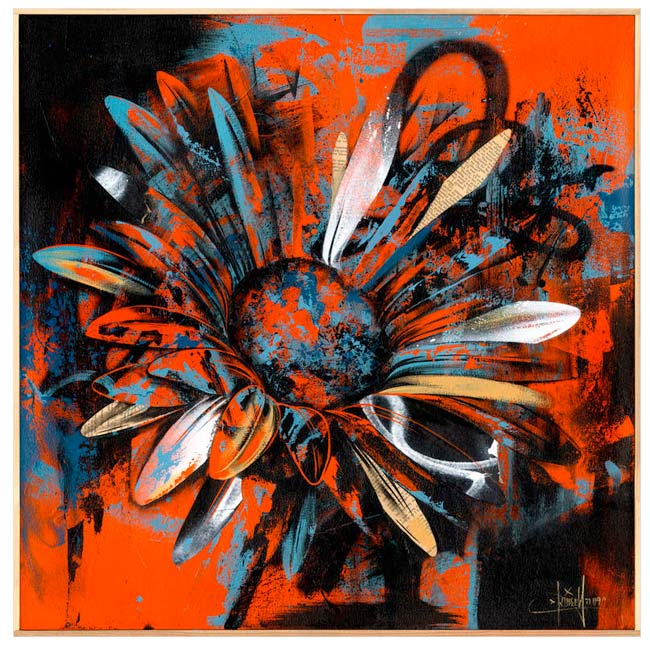 What is it that defines you or sets you apart from other galleries or curators in your genre?

I am extremely hands-on with my gallery. I have a small staff and we work really hard for the artists and every show. The way I look at it is this: I have my clients and collectors who we work for, and we also work for the artists. As much as the artists need the galleries, the galleries need the artists too; it’s completely a two-way street. I think some galleries feel they are doing the artists a favor by showing them, and I couldn’t disagree with this more. I ask a lot from the people that show with me, usually more than other galleries they work with. But they all seem to be ok with it, as I give them more back in return. 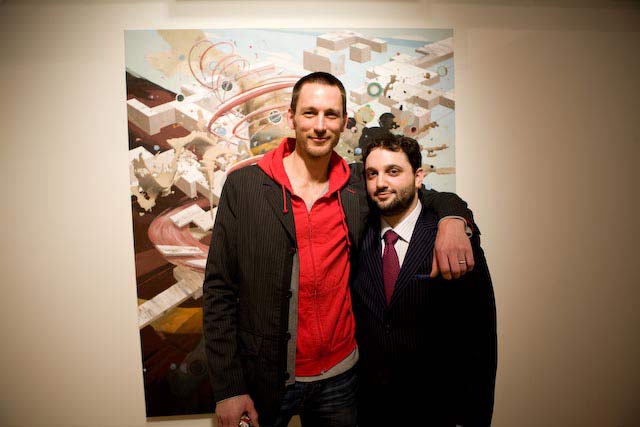 What was your first artist or situation that got you hooked on being a gallerist?

When I started my gallery in early 2002 I was not doing exhibitions. Instead I was more of an art dealer than what I consider myself to be today, which is a gallerist. I was introduced to the industry through someone else that had a gallery and dealt in original signed prints. For the first two years, I was mainly handling original signed prints from artists such as Warhol, Dali, Haring, Miro, Chagall, etc. In 2004 the first group show called Misdirection was held, which included artists such as Ron English, Jeremy Fish, Jonathan Weiner and others. Before that show I started collecting works from this scene and it made sense to show the artists that were current and my contemporaries rather then selling prints by dead guys. After that show the gallery switched gears and here we are today. 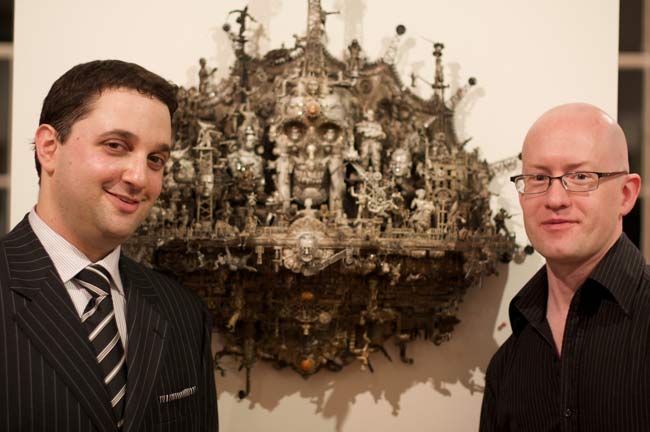 What do you look for in an artist or situation for exhibiting talent, and what are your expectations of either?

I am looking for something unique and different. Something that can stand out in a crowd, quality is even more important. I am putting on some shows with a few young artists next year. It is definitely a risk but they have talent and also they are hungry. The hunger is what makes me feel comfortable in the situations. The fact that they have something to prove means they will deliver and wont half ass anything. I’m always bringing 100% to what I do so I expect the same from the artists. Since I booked these shows (and I am thinking about three younger, newer artists I am showing next year in particular) all have been doing great things. One has pretty much sold out a solo show in Canada last month. Another was just picked for a large feature in an upcoming issue of New American Paintings and he will also be on the cover. The third has been getting great press and generating a lot of internet buzz. 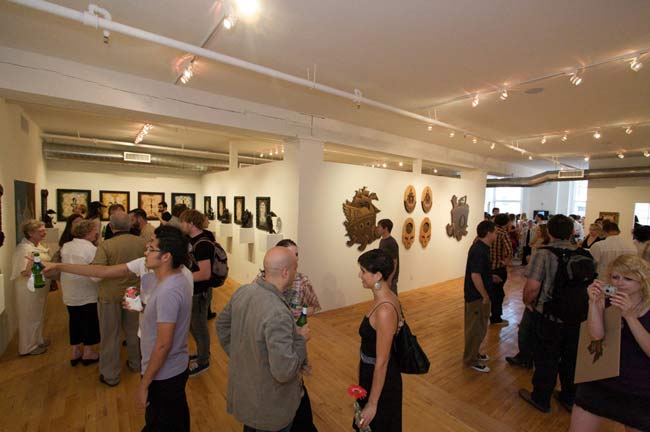 You’re quite renowned for throwing exhibitions that blur the line of art shows and live events into experiences. Where do you find the inspiration for such an undertaking, and when might we expect another?

I think the only event that I did that would fall into this category was a pop-up show in Miami that coincided with Art Basel Miami Beach 2007 called F.A.M.E. Collective. I was approached by a friend of mine that was in Miami at the time that was working with a group of liquor companies. He approached them about sponsoring an art exhibit and we were given a nice budget to work with. We rented this incredible house on South Beach and spent a couple of weeks transforming this house to a gallery and it went off really well. I am not planning on doing another one of these events at the moment but have been offered a couple of projects that are interesting. It would need to be the right thing so no plans as of now. 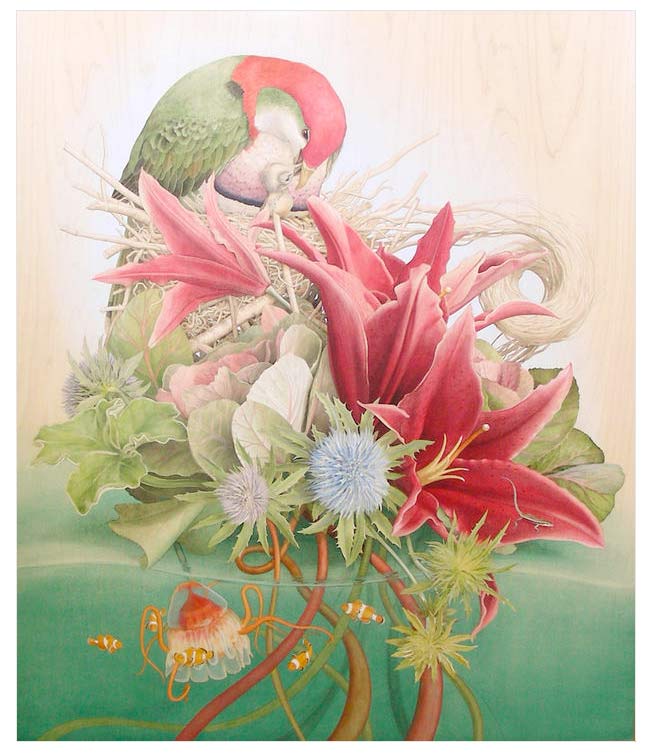 Your story seems like more of a journey than a mere profession. Do you ever think about putting your thoughts into text, making a collection of thoughts about your artists, your views on the generation, or merely an interesting group of creative concepts?

I have not thought about that, although it could be something to consider for the future. I think now something like that would be a bit premature. I am entering my eighth year as a gallerist and feel there is still so much more to learn. Also I think the art world is changing rapidly, and this might be more appropriate in the future. The other project that I joke about putting together is a book for artists that would basically be how NOT to submit to an art gallery. You would be surprised by the emails we receive. 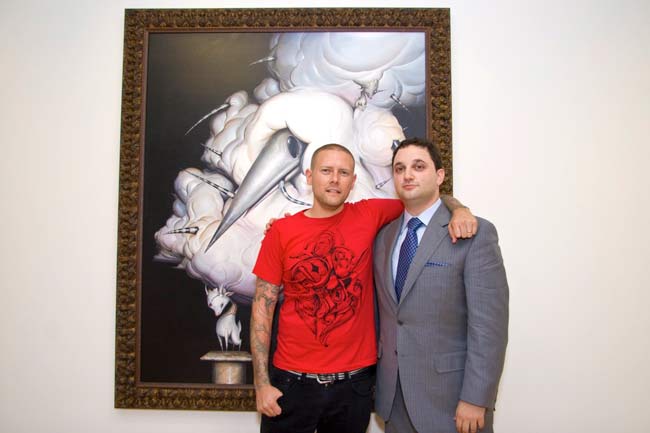 Looking at the current landscape of the arts, what do you foresee on this horizon?

This is a tough one. Obviously the economy is really changing the current art market. Things got a little out of hand and this is forcing us to press the reset button in certain ways. I think the main problem was people going crazy with prices. Personally I have always made every effort to keep the prices of the artists I show reasonable and realistic to where everyone is at in their individual careers. I have seen some artists that went nuts with pricing paying the price now. People increasing prices by 100% or more sometimes from show to show. Well it worked for a while but the bubble burst and now the work is not selling. As a result some have been dropped by the galleries but many times it’s those galleries that are responsible for the price hike. I think most of the work I show is very reasonably priced for the quality of work you are getting. In times like these I think that is what will prevail, quality work. Everyone else is in for a rude awakening.

As we move into the next phase of our days, do you have any parting words for the readers and art enthusiasts?

Yes buy art because you love it, not because it may be a good investment. If you are looking for an investment go somewhere else. This is peoples’ blood sweat and tears (mine included), so don’t speculate on peoples’ love and passion. 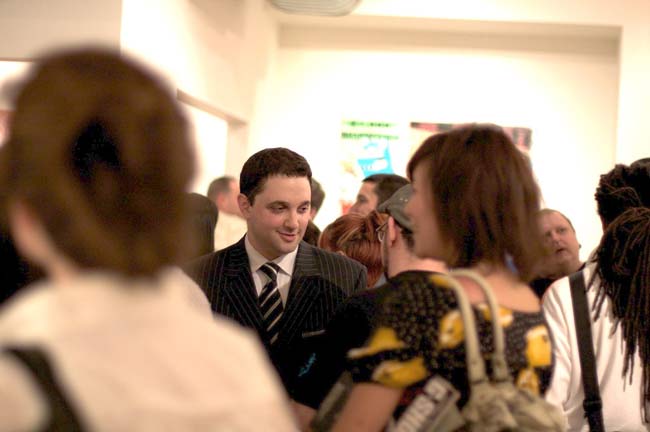 Working with the smooth reality that is his trademark, gallerist Joshua Liner during a recent opening.