Indiana native and Florida resident artist Nathan Skiles delves deep into his interest in kitsch imagery to produce a curious new body of work. This new investigation, a series of cuckoo clocks made entirely out of his chosen medium of craft foam, is a tilt to still life paintings as much as it is his own personal experiment into the sociology of pup culture influences on current art trends. Join us as Nathan Spoor leads us on our tour of Skiles’ conceptual objects, currently on display at Sloan Fine Art in New York. 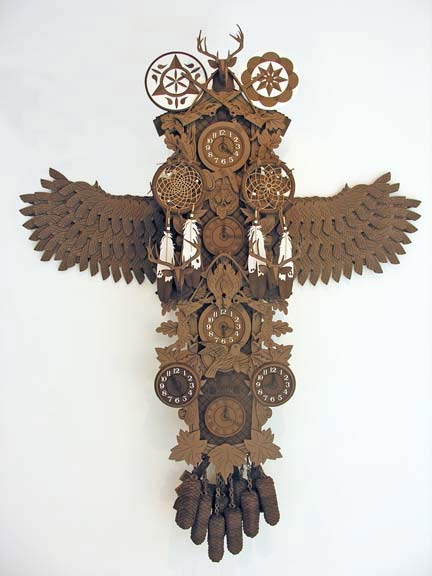 So tell us a little about your early days. Where did you grow up, was it an artistic environment?

I’m originally from a small town outside Anderson, IN. My mother is an elementary school teacher and my father works construction. While I didn’t come from an artistic family or environment I would say I never lacked encouragement or the first hand experience of craftsmanship. My father was raised German Baptist and while I wasn’t brought up in the church I did spend several of my younger years living with my great grandparents who were devoted followers.

Currently I am living in Sarasota FL. Since graduating from Montclair I’ve had the opportunity to take several positions in and around education at the Ringling College. 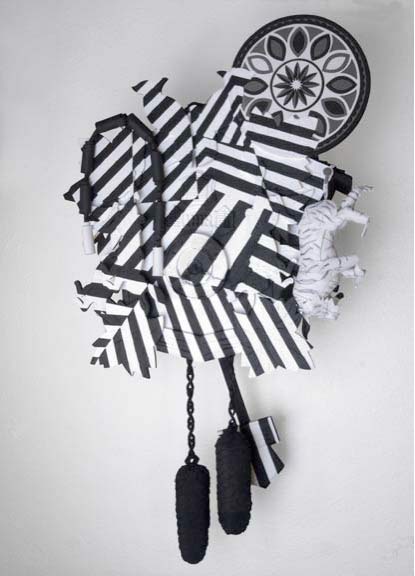 Did you attend an art school or study in a specific place or manner?

I did my undergraduate studies at the Ringling College of Art and Design in Sarasota, FL with a focus on painting and went to Montclair State University for graduate school.

Tell us a bit about how you came to the point of your work that we’re seeing before us. It’s a unique direction for sculpture / dimensional art. Was it your intention for them to be interactive or do they make a specific statement unto themselves?

The last 2 pieces I made for my first solo show were a flag and cuckoo clock. The show was a rather eclectic mix of wall and floor work and afterwards I decided that I really wanted to challenge myself and produce a body of work that was a bit more thematically structured. When working on a series of pieces I tend to start with the same object, allowing myself to do variations on a theme. Coming out of graduate school it was club forms; I transitioned from the club to cuckoo clocks. When I feel that I’m working too hard to make conceptual links from the cuckoo clock to the various objects I attach to it then I’ll make the decision to move on to something else. 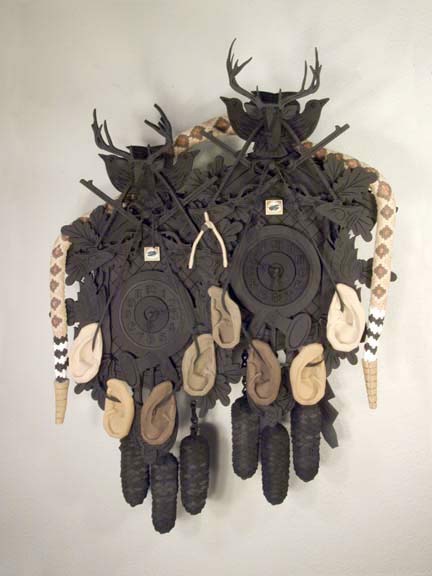 At what point did you begin working with this medium and what other creative avenues have you pursued?

Between undergraduate and graduate school I set up a studio in what used to be my great grandparents farmhouse. At the time I was painting and became very influenced by the clutter that had amassed in the abandoned house. At one point I noticed that the reality of the physical objects occupying the same space was as important to me as the illusionism of painting, at that point I decided to go to graduate school and pursue sculpture.

I work almost exclusively in craft foam. I’m attracted to the material because I’ve found that very few viewers readily recognize the material and are able to quickly eschew any material associations and more quickly begin the process of imagery association. 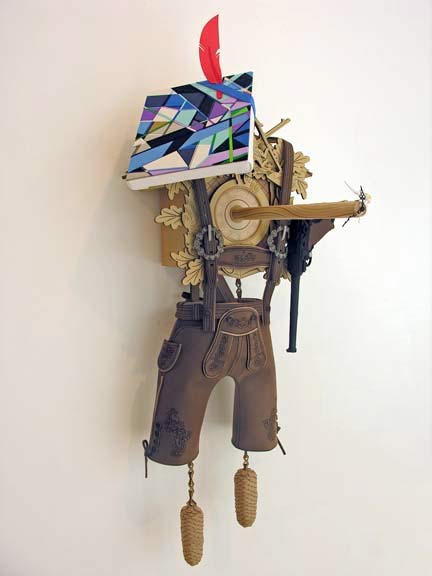 Some of the most intriguing pieces that we’ve seen are clocks, timepieces. Is there a kinetic aspect to your work?

Obviously I get asked, “do they work?” a lot. The go to answer is, “Yes, the function just like a painting of a clock.” Having started out as a painter my primary interested in representational imagery is their semiotic relationships. For me it would be a bit redundant for the clocks to work. That being said the mechanical nature of the clock is highly evocative, and a very fertile subject that I would want to investigate if I decide to continue working with the cuckoo clock imagery.

It seems as if the medium simply begs (or demands) for ambition in the idea department. If you had no financial or spatial limitations, what would you dream of producing?

I love to work slightly off scale and have generally worked with images in a way that are evocative of still life painting. Given the opportunity and exposure I would love to introduce elements of landscape and the monumental into the work. I have plans for some larger grandfather clocks and would love to have something like a tree house extending out of top. 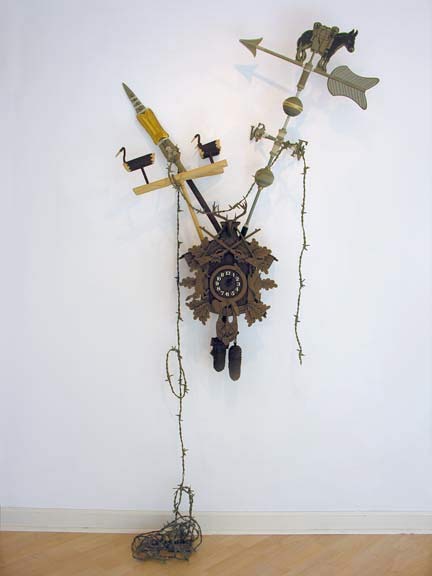 What was the first thing that you can remember having created?

I remember living with my great grandmother and attempting to reproduce a letter she had written in cursive. I painstaking attempted to recreate the looping lines and felt terribly frustrated that I had no idea what it all meant; I was probably four or five.

What do you find to be the most influential moments for inspiration or creativity?

When selecting imagery I try to be as receptive to external influence as possible; from the “fun-fact” homogeny of our popular culture to the minutia of the esoteric “all is grist for the mill”.

How do you feel that audience and staging affects your decision to make a certain piece? Is there something that has an inspirational impact on your work?

As much as I love to investigate work I try to set up each piece in a way that allows the viewer to assess my work in a way that recreates my own associate navigation of images. At times I try to be particularly coy about what image I’m using or how they connect to one another but never intend to be outright obtuse. Inversely, other times I try to use very recognizable images but will edit out ones that are too evocative of what I feel are one-dimensional ideas. 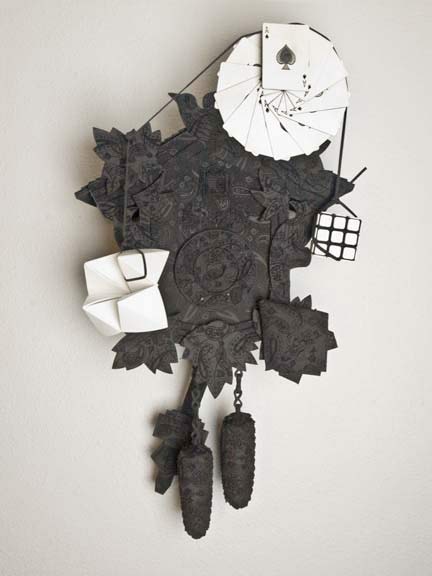 If you could create a body of work anywhere in the world, what would it be and where?

I’ve only been working with the cuckoo clock imagery for the past 18 months and will only continue to use it as long as my interests lie in their kitsch imagery. That being said it’s very safe for me as a young American artist to appropriate touristy symbols of other cultures; I would love to spend time working within another culture that retains strong connections to their traditional folk culture. It would be very informative to me to see if the works becomes transformative or transgressive. 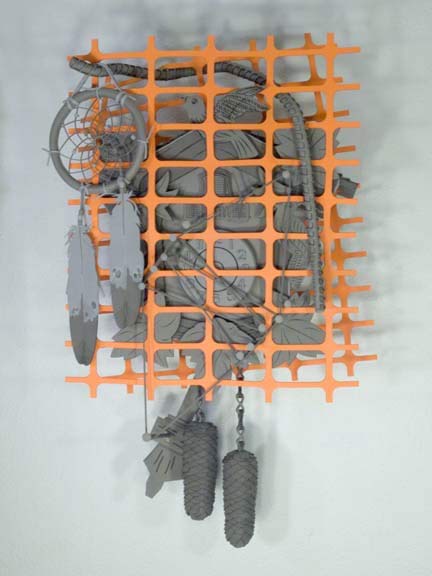 Has music been a factor in your creative process?

For me that’s a tricky question. I’m probably one of the few artists that find music to be an unimaginably effective distraction. The paradox is that while I can’t stand to listen to music while I work I’m almost constantly watching video in the studio. And as far as video goes there’s really no rhyme or reason to what is played.

Outside of the studio I listen mostly to early country music and love that they’re concise, no longer than a couple minutes long, and leave me restless to re-listen to them. I’m a huge fan of the paintings of PhiIip Guston and like the music I mentioned I find that I love frequently revisiting his work for short periods. 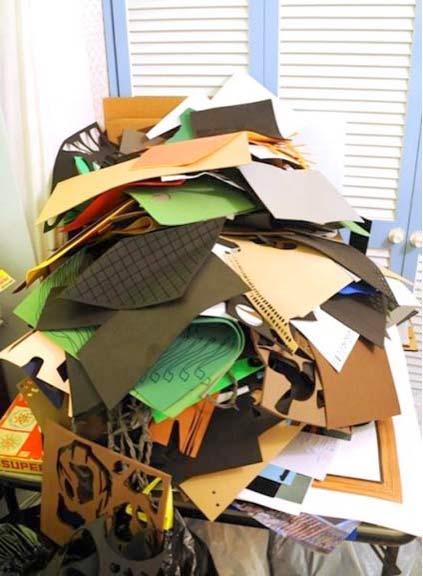 In your opinion, what is the most important or key component to making art?

As both a viewer and maker, for me the most important part is the investigation. Like an “art cop” there’s a real thrill to me when you get to thoroughly investigate a scene, and root out how an image or event is functioning in our culture.

What do you think of the entertainment aspect of art, or of art being humorous, or its possible value as a social vehicle?

It’s my understanding that for art to have any value as a social vehicle it has to truthfully represent the said society. For me like many other artists our initial understanding of art was through the filter of entertainment, it would be disingenuous for me pretend otherwise. My only concern is when I feel that work doesn’t transcend or transform the initial inspiration and dig deeper into the root of the attraction. 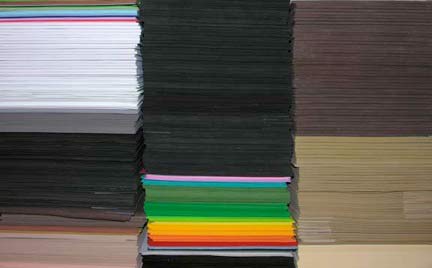 Is art better viewed for its aesthetic wonder or personal appeal?

At this point I’m not sure the two are mutually exclusive. It seems that just about anything we own or identify ourselves with comes in a thousand customizable options; it goes beyond mere taste in that young artist are including customizability as one of the defining principles of aesthetics. Taking a look around personalized social networking pages will show you that users prefer what they can control to what others may collectively deem as “beautiful”.

For me art functions best when it transcends personal appeal and reinvestigates what wonder we find in aesthetics.

Do you have any top authors, or good books you’ve read lately?

I read mostly short stories, like music I prefer to revisit several small things often to see how my ever-changing attitudes affect my relationship to the work.

Annually I reread almost the entirety of H.P. Lovecraft’s short stories; for all his shortcomings I love that he had a desire to talk around a subject or describe what he felt was an impossible image as opposed to clearly defining every element; allowing readers’ imaginations to make their own associations.

When do you feel most creative and productive?

When I’m trawling the Internet for imagery and ideas.

Do you feel your work is conversational or narrative?

I feel that the work relies on the viewer to have at least peripheral knowledge of several of the images I employ in each piece. For me the conversation begins when the viewer unravels the conceptual web of tangential threads that connect each object in a piece. 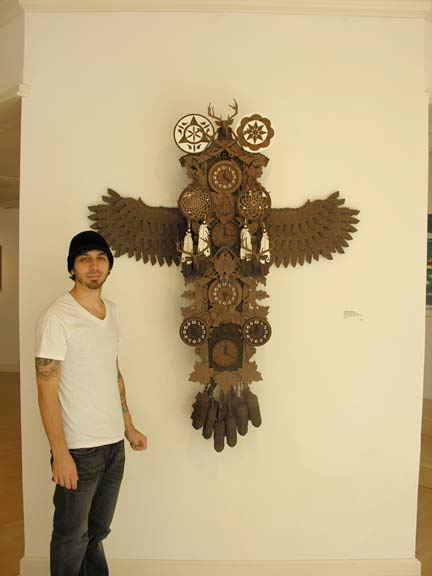 Friend of the artist showing scale of “Der Zauberlehrling”

Do you find that there is a certain time of day or week that’s most conducive to being the most creative?

Like many artist I’ve been rather nomadic, changing jobs and residences often. I love working a full time job and have used them as invaluable educational experiences. Currently I work in the studio mostly nights from 5in the afternoon to 12 at night. It’s a more structured studio practice than I’d like but I find that the set hours really force me to produce.