“Publish or Perish” is the title of Kiel Johnson‘s upcoming installation at the Mark Moore Gallery October 17th featuring his interpretation of a web press called the “The World Wide Web Press”. The huge press, made primarily of metal and cardboard will have a 70 yard long drawing of Kiel’s threaded through it.

Kiel, the son of a newspaper publisher, developed an early childhood crush on the mechanical intricacies of the web press as he watched his father work in the loud pressroom filled with the intoxicating aroma of newsprint, ink and machinery.

“Publish or Perish is something my dad always told me growing up,” Kiel says. He is a publisher of a small newspaper and I always took it to mean do whatever you do and do it all the time – stay busy. Keep after it, never give up never surrender. Stay in the action, participate in the conversation, make your thoughts know, speak up…”

And Kiel does just that in a big and elaborate way, sparing no detail. At this point, he still has a ways to go before the painstaking work for this massive show is complete. His approach: “Work and end up with a series of large (and amazingly intricate) drawings and sculpture evolved from a central point” says Keil but what makes it into the show is dictated more by how each piece moves him by the time they are finished.

This new body of work is not only his “swan song for dying technology” but is also a contemplation on the impact of instant – often fragmented – information that is the internet vs. the physicality and commitment of the printed word on paper.

Among the works he’ll be showing are several large scale drawings on paper or wood as well as other beautiful and meticulously constructed cardboard, chipboard and paper objects. Here are a few peeks at what he’s up to and some studio shots.

Kiel will be featured in Hi-Fructose Vol.14 due out in January 2010.
Read his artist statement after the images below: 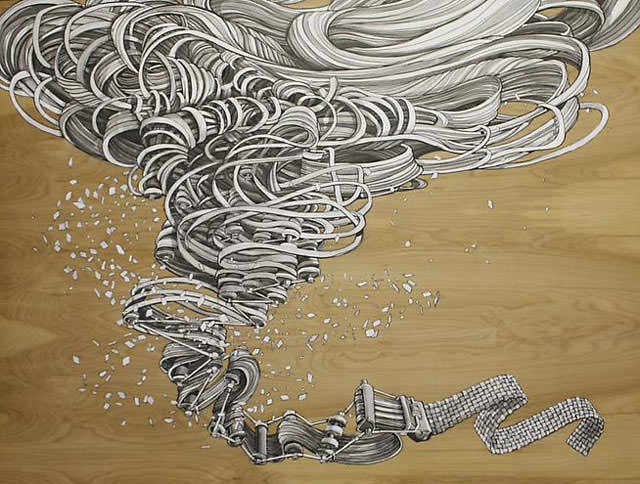 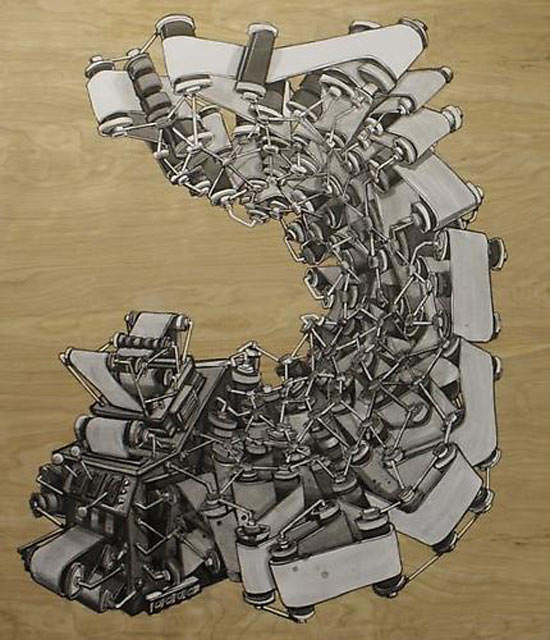 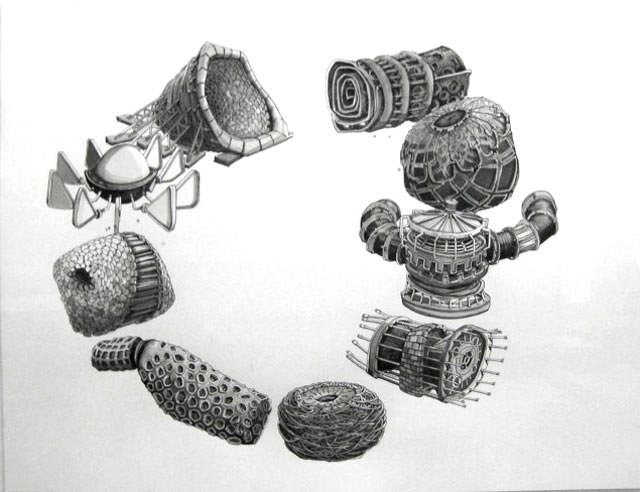 Parts and Piece to a Sculpture I Will Not Ever Build 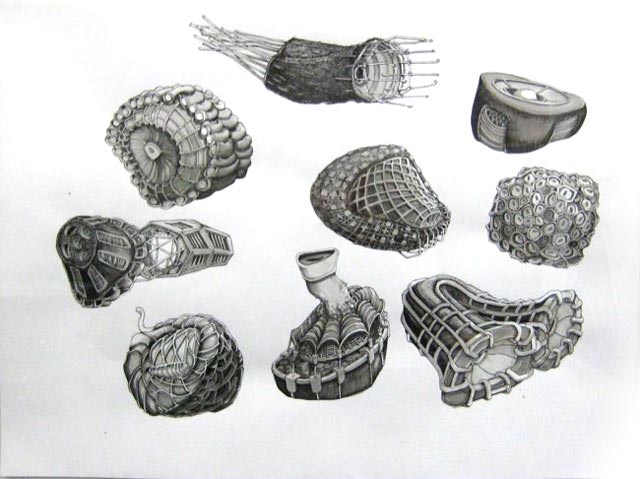 “Nine to Choose From” 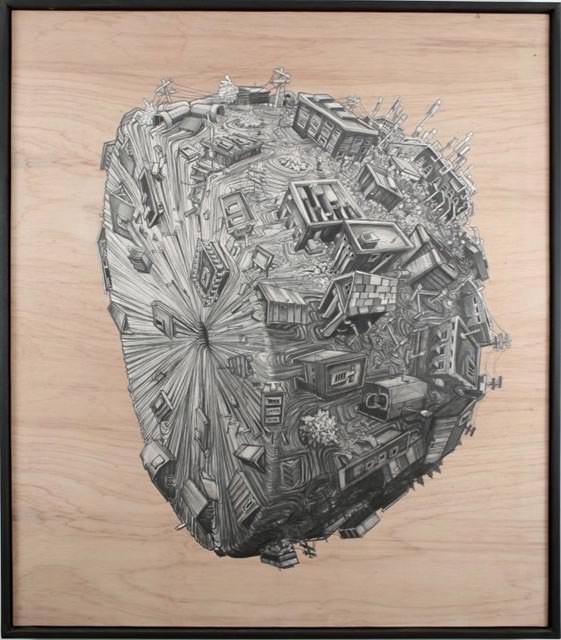 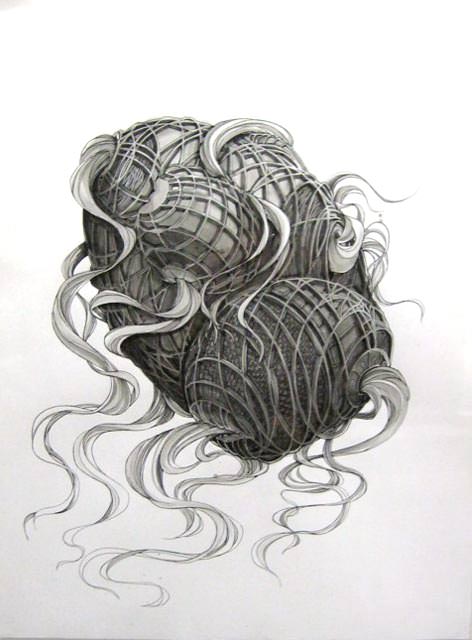 “Portrait as a Simple Celled Organism” 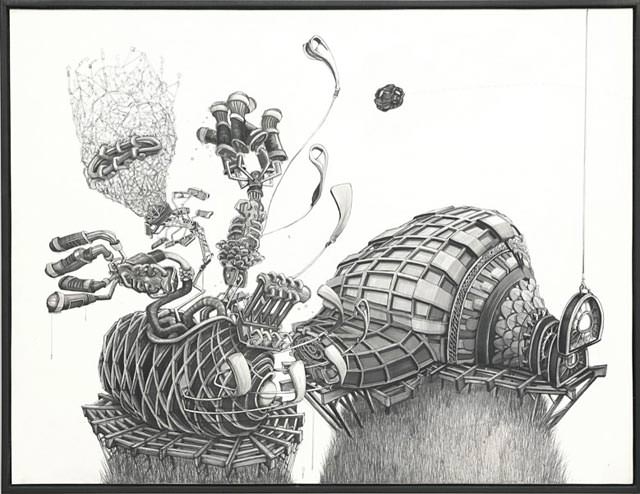 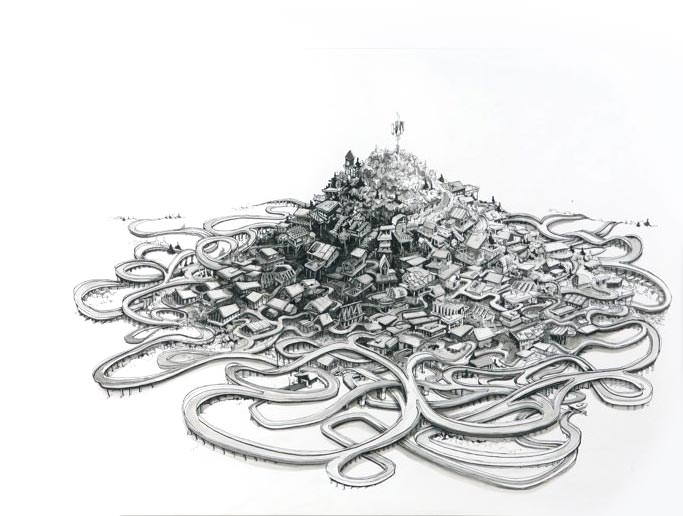 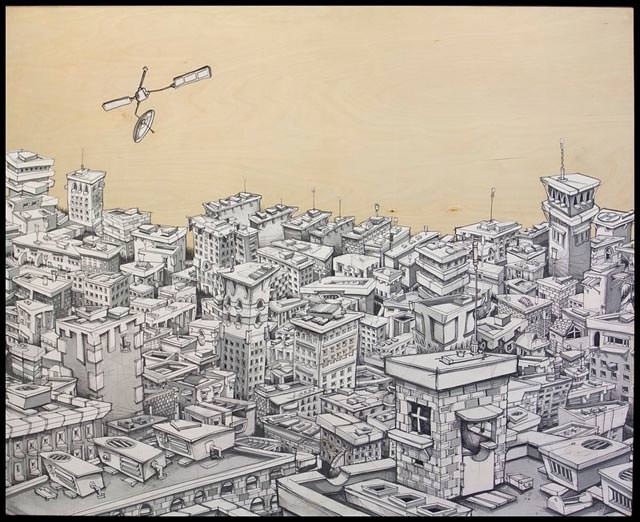 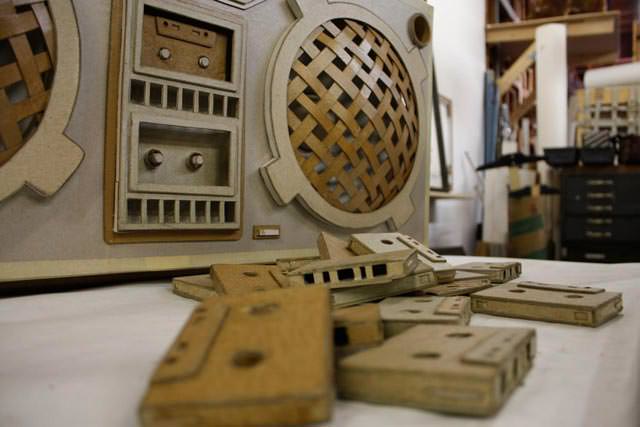 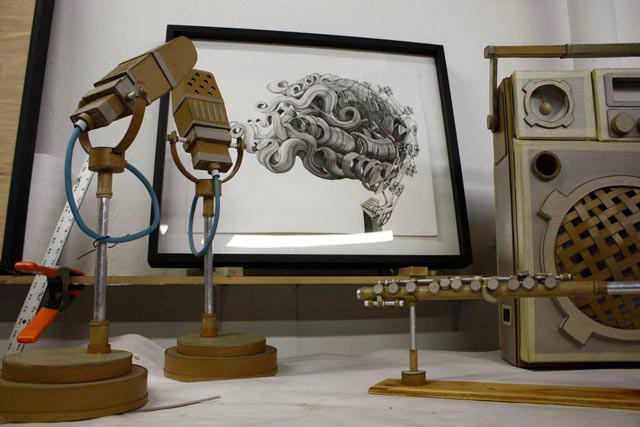 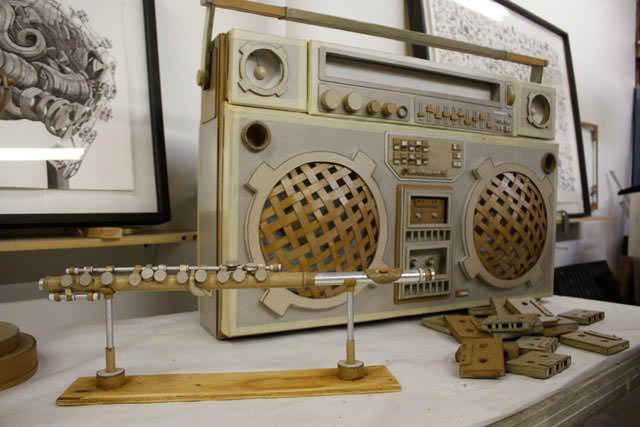 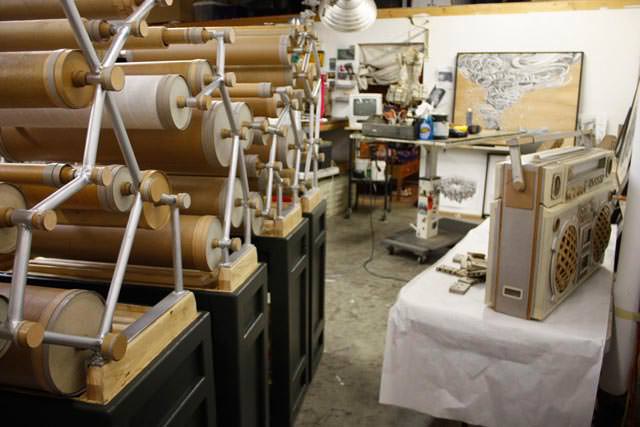 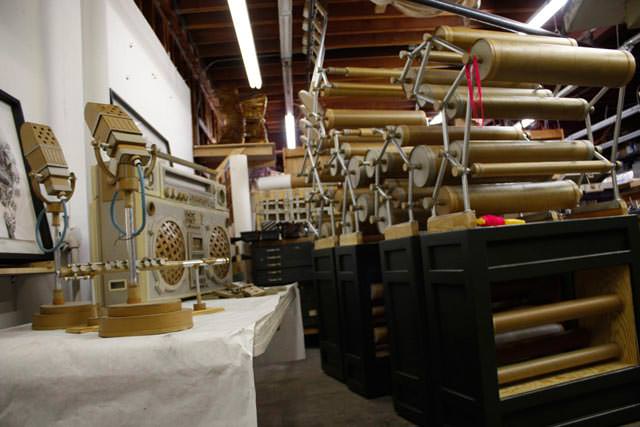 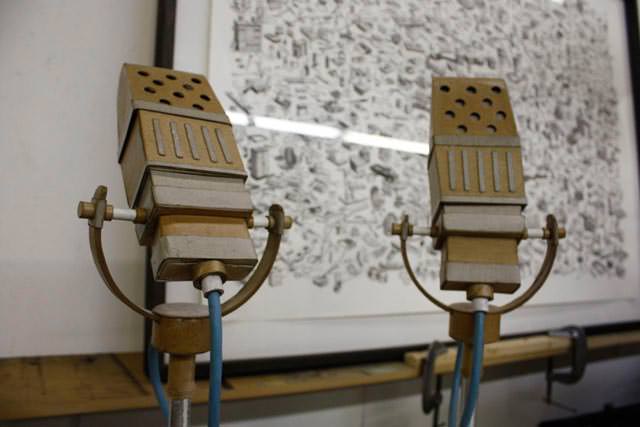 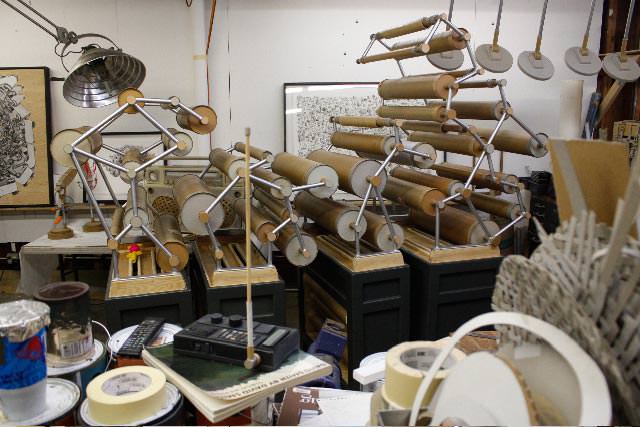 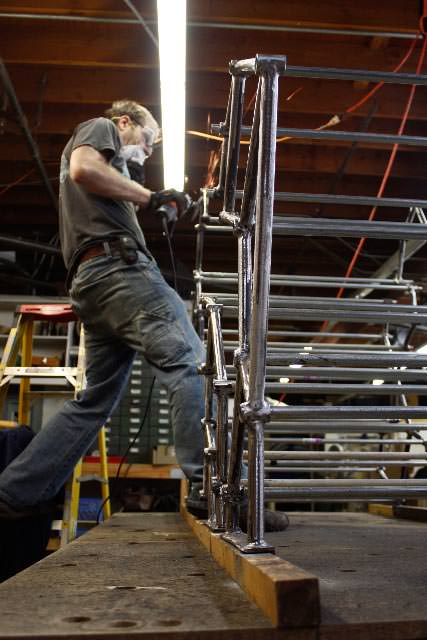 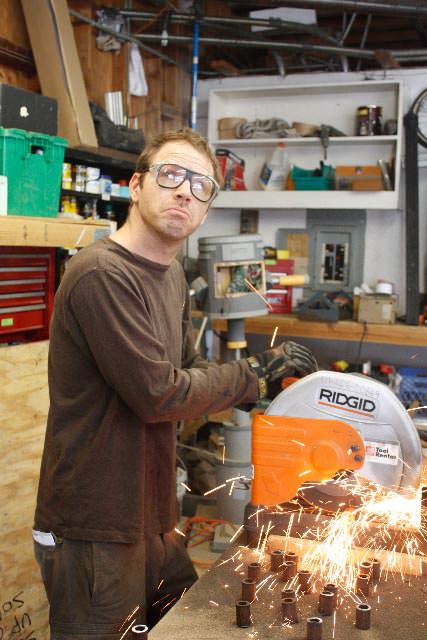 “Publish or Perish” started simply enough as a series of drawings investigating an amazing piece of machinery that I have marveled over since I was a little guy. A contraption most of us have never seen. A contraption all of us have reaped benefits from. The web press.

My father owns a small hometown newspaper, The Johnsons’ County Gazette. When I was young, I would regularly go with him to the press facilities and watch the various editions roll of the presses. As a little guy I was amazed that my dad understood and utilized a piece of equipment so intricate and complicated. I would watch the press for hours. It might have been the first time I remember sitting down and seriously looking at an object to figure out how it was built. I analyzed every rivet and bolt. Everything was there for a reason.

A web press is the type of press that a newspaper or a magazine is printed on. It has all those rollers and ink trays. The paper is woven back and forth like a web, until a multi page, folded document is ultimately spit out. I enjoy being able to watch that entire process from a roll of paper on one end, to a printed folded and bound document on the other. The Web Press consumes and transforms, picking up more imagery and information along the way. Much like life.

The web press is a great example of form following function. Only the necessary parts are there. Nothing extra, the web press is very efficient and slick, streamlined. The constant, steady, droning roar sounds they make cannot be reproduced any other place but the cavernous pressroom. The smell of the ink and the newsprint combined to the sweetest of aromas that immediately trigger childhood to this day.

Information being distributed on the daily, to the masses with the assistance of the web press is a very new and modern idea. Everyone can read the same thing. We can all learn together. This caused a major power shift. It gave some to the people, but also gave the people with the presses power.

Gutenberg’s printing press changed the world forever. Gutenberg started the information age. The web press is the crowning achievement of this chapter, this intricate network of rollers, ink trays, dials and bearings has brought the world together in ways thought unimaginable only a few years earlier.

Now newspapers are closing all around us, the printed image is in decline due to a new web press. The World Wide Web press has brought down the traditional web press, or is it just the next logical transition? Not using paper and ink saves valuable resources. So fun to read a paper though. I love the smell. What’s more important, the world or my memory triggers?

I thought I would do a series of drawings devoted to those memories from the past while at the same time commenting on the future state of information distribution. It would be a swan song for dying technology. While also an homage to my Father, The Johnsons’ County Gazette and memories from back in the day. Where the drawings take me will be what I show. Don’t worry about the final product, just work and end up with a series of drawings and sculpture evolved from a central point. Like a family, one generation of images would give birth to the next.

An interest in “the way things used to be” as well as the “way they might end up.” I enjoy engineering and design features of the past. A time when objects were well crafted and meant to last for a generation or more, not just a season. I enjoy thinking about a time when your fancy new sewing machine came in a big pine crate and you needed a pry-bar to open it. Once opened, the machine had thousands of moving parts all cast in iron and aluminum, with levers, knobs and switches. You could see how it was built and if something broke down, you might even fix it yourself with a basic set of tools and some ingenuity.

What are other ways to tell stories? Can you really get the facts from facebook, twitter, blog rolls, and text messages? Does anyone actually have the facts? “