After several reclusive years in seclusion, Orlando-based artist Eric Althin has convinced his mystical friend Felix to make himself public. To the great joy of crowds of attendees at Bold Hype’s recent opening, Felix made his somewhat tentative debut, keeping mostly to himself. Take a look at a few shots of Eric’s new wonder as well as some crowd interaction to the impressive nether-beastie. 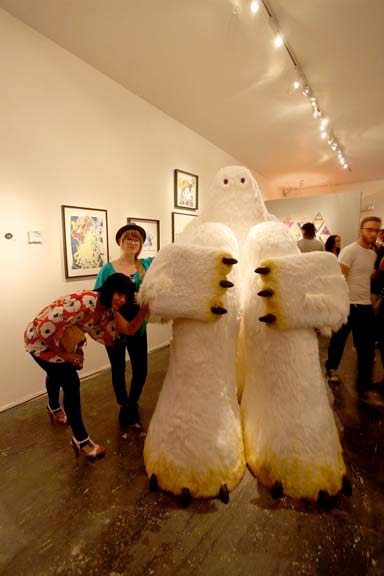 When asked about the origins of this curious character, Althin responded, “He definitely has a story, but I leave it up to the viewer to speculate what that might be. I think that’s part of why he exists, to spark the imagination and make you wonder. As far as what he is… a lot of people are calling him a yeti, but that’s not quite acurate. I’d imagine Yetis to be related to apes in some way, where as Felix’s evolutionary ladder would reveal his closest relative to be the polar bear.” 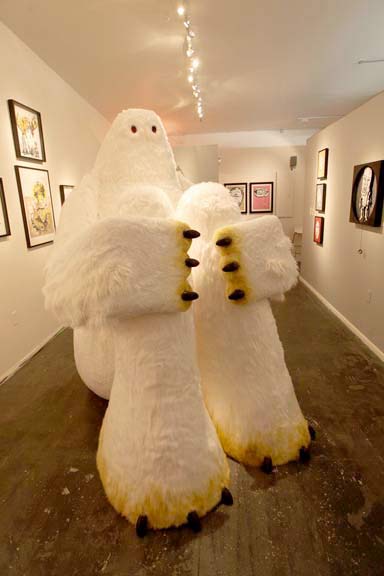 Althin has been drawing monsters since a very young age, but this is his most impressive leap of creative joy – bringing an idea from drawings to larger than life 3D. The impetus was simple: hand over the reigns as curator of his gallery to another for a month, and lo and behold – the ideas that would be Felix flooded in and he was born. 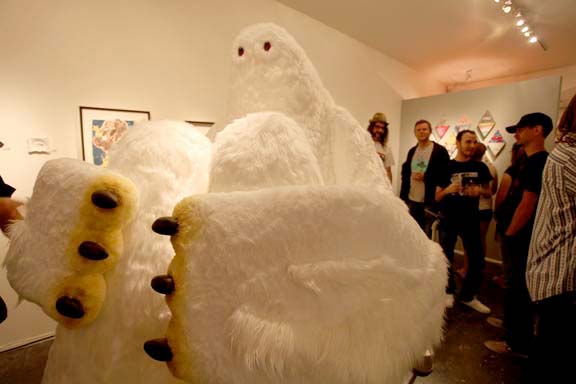 Althin was recently introduced to David Jordan, who works with Heather Henson (daughter of the late master Jim Henson). Jordan loved the idea, but was called to duty on another project before completion. Not to leave a good thing on the ground, he put Eric in touch with professional puppet and creature maker Tamara Marke-Lares. Together the two would bring the vision to life in exacting detail. 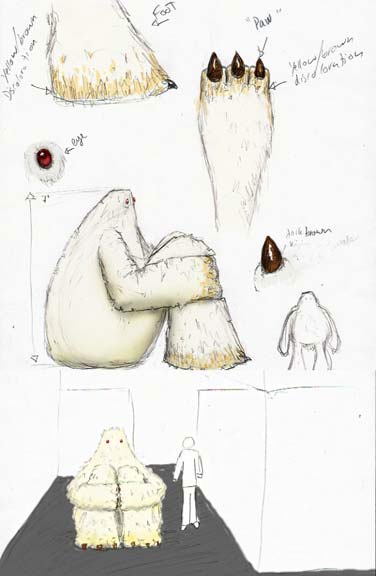 Althin is a lover of the nature and its many varied inhabitants. He states, “I think most of us feel this facination with animals when we are young. Then somewhere along the line, we grow accustomed to this world and everything in it. An elephant doesn’t blow our mind anymore. But imagine if you had been raised in isolation and you we’re finally allowed to come out and explore the world for the first time, you’d find a strange and alien world teaming with weird life! Or imagine what it would take to create a self-sustainted robotic insect; one that can feed itself, evade predators, build nests, etc. It would take years and cost millions to produce, meanwhile a cockroach crawls by our feet and we step on it without thinking twice. We are living on a pretty amazing planet with creatures no less mind blowing than the ones we can dream up. 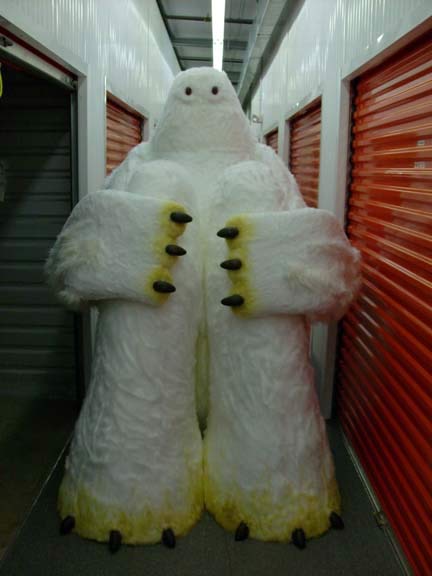