Buff Monster’spaintings are just as much flavors as they are expertly executed images and his newest solo show “Heavy Metal Ice Cream Smile” at opening this Saturday at Corey Helford Gallery is no exception. You can almost taste Buff’s whipped paint as they bust through their wooden panels to their imaginary Death Metal soundtrack. Check out an HF exclusive interview and behind the scenes progress shots with Buff Monster on his new show! See just what a Heavy Metal Ice Cream Smile tastes like! 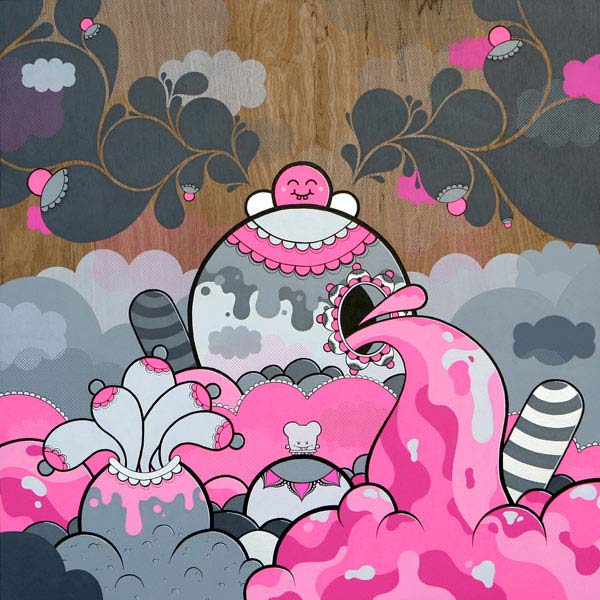 Hi Buff, may I call you Buff?

So Saturday is your first solo show in a year since “The Sweetest Thing” at Corey Helford Gallery. We hear there’s an installation being built. I remember those great mammary fountain sculptures with balloon growths on the walls from a few years back, they were fantastic.

Thanks! Yes, that was a very ambitious installation. There were several people working on that for many many hours. This year, the installation is far less time-consuming, but I’m still so excited for it. I can’t wait for people to see it! I’ve opted to be very ambitious with the paintings on display. 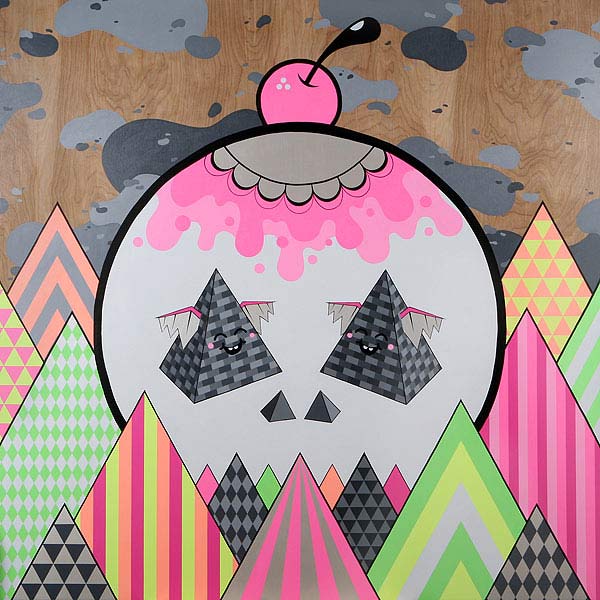 What themes are you investigating with this new show? Did it just evolve?

I’ve had a whole year of research and exploration that has gone into this new group of paintings. In the past, I’ve wanted each piece to really capture a whole lot of the Buff Monster essence, but for this show I’ve chosen to let each piece say what it wants to say. So there is a whole range of paintings. Some are very dark and satanic, some very bright and happy. I’m exploring type much more than I ever have and also how traditional landscape paintings fit within the larger art scene and also within my work. In some ways, landscape paintings really capture the essence of painting. 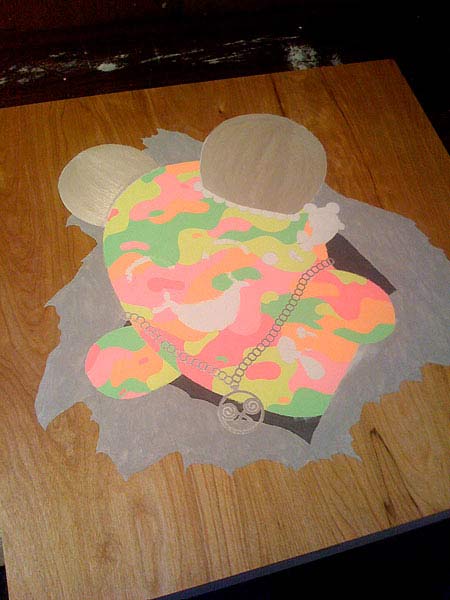 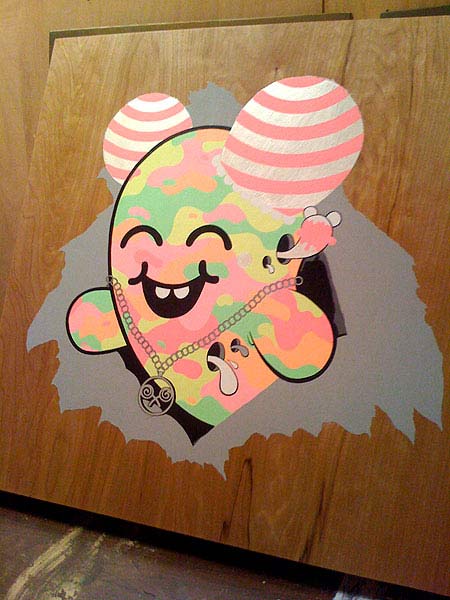 Your work keeps getting tighter and tighter, do you wish you were a machine? It’s amazing how flat the fields of color are, are you using alot of rollers, stencils,masking, and carpel tunnels?

Yes, I’m super anal about how the paint goes down. As I was saying, each piece in this show is different from the rest, and they’re each painted differently. For some pieces I use a particular type of acrylic paint that is very thin and very opaque, so its makes laying down flat areas very easy. Some paintings, I’m using tape to mask off areas, and then filling them in with a brush. And as easy it looks and sounds to paint with tape, it really takes a great amount of skill and practice to lay down the paint perfectly even. As my many assistants for this show will attest, it’s not as easy as it looks. (I actually had to let go of one assistant because he couldn’t paint a simple orange triangle). 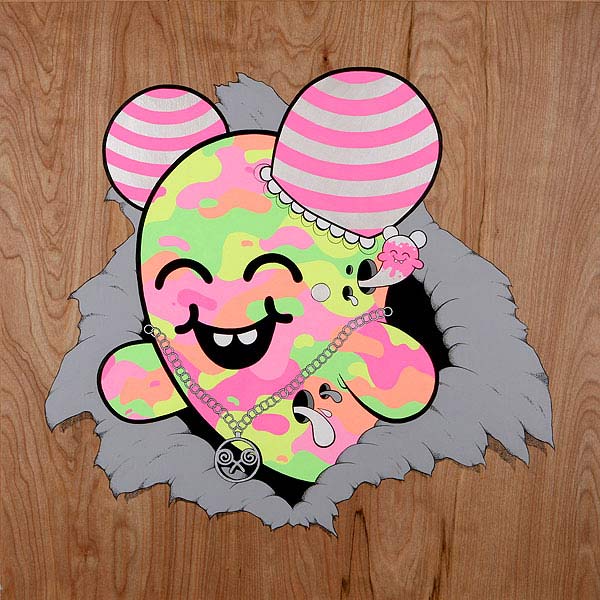 How much planning, drawing and preparation goes into each painting?Do you just burn through 000 brushes and spend months hunched over mesmerized by lines within lines in day-glo pink, hypnotized.

Oh, there is a tremendous amount of planning that goes into each piece. Everything is either drawn to scale on paper, or mocked up in Illustrator. Either way the image is transferred to the panel and then I go about filling everything in. I have a little map of each piece, where each color is specified. And, of course, all my colors are pre-mixed, just the way I like ’em. 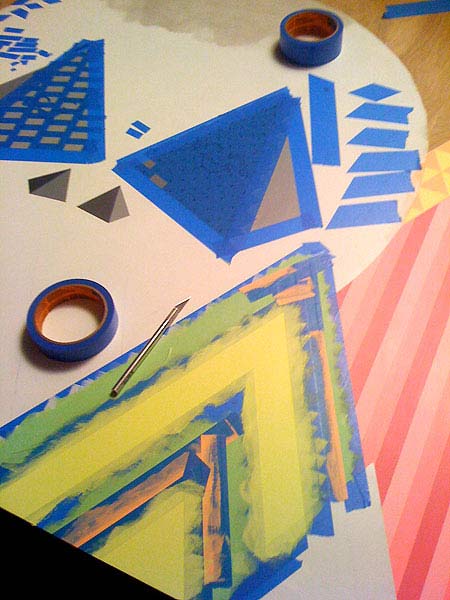 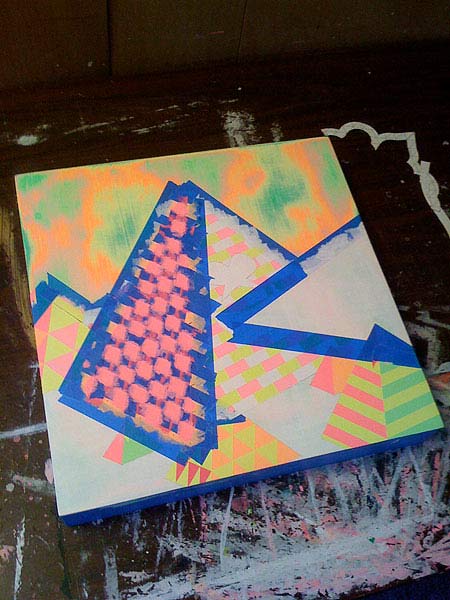 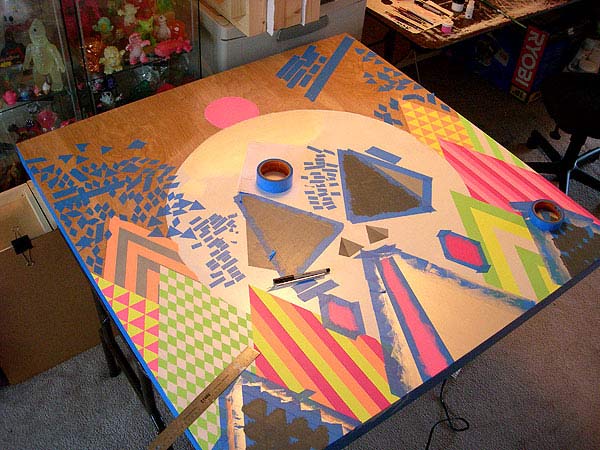 I see a lot of triangles populate your work and pyramids. Is this a reference to the Masons, the Egyptians or have you succumb to their hallucinatory multi-dimensional power?

Yeah, it’s more of an idea drawn from the Egyptians. I tracked down and printed many photos of the Great Pyramids in preparation for the show. 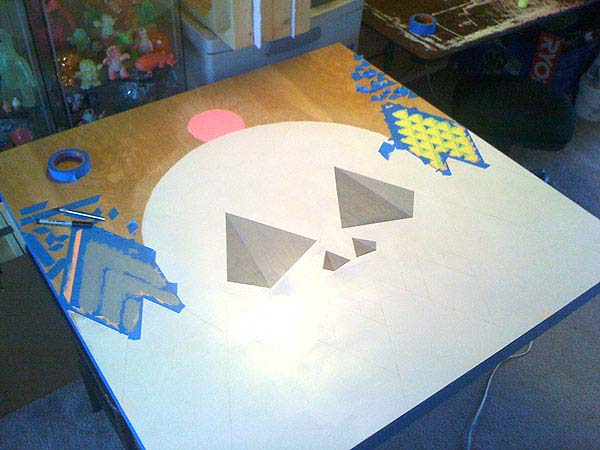 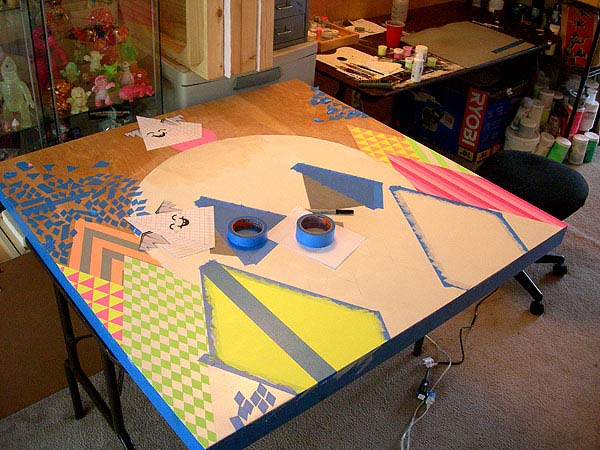 Your creature forms seem to be popping out of the wood this time, as if the wood was paper. They’re smiling, but must be powerful. I wonder what they could do to a person.

I did two like that for this show. One is really angry, and one is really happy. I think they could both do some damage!! 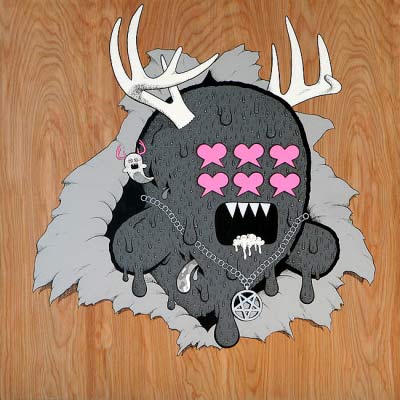 It seems they are into Heavy Metal but do they know that we exist and are looking at them? Or did they just find a Dokken tape that they play over and over?..What sort of sounds do they make?

They are definitely in their own world, as am I. I never thought about the sounds they’d make, but Heavy Metal is certainly the soundtrack to their lives.

You really seem to integrate your art and your life, like artists like Mike Shine and Sacramento’s Skinner. You seem to be covered in pink, always surrounded by gelatinous swirling mammarian masses (some imaginary, some not–I’ve seen pictures)… Is there a “Buff Monster’s Day Off” when you let down your faux hawk and paint brush and paint in mud browns?

There are some days that I don’t wear a Buff Monster shirt out of the house, but those are rare. 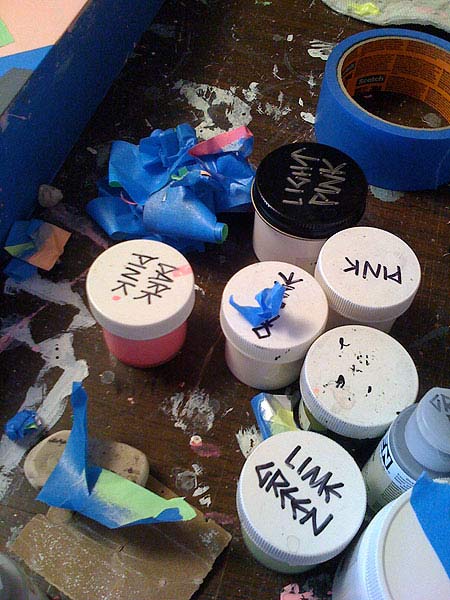 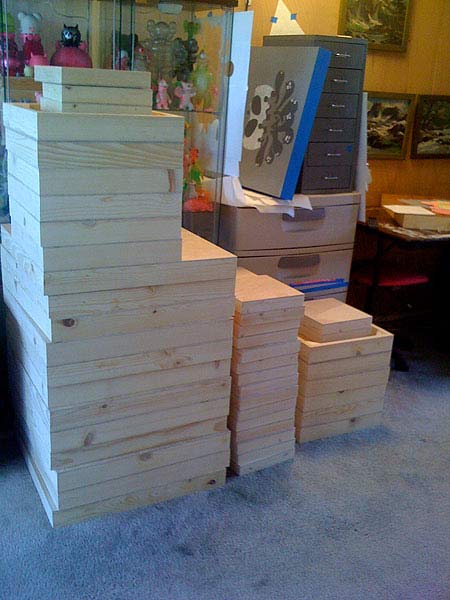 There has to be a flip side to the saccharin fueled world you create. Underneath the dripping piles and cherry geysers, is there an underbelly of decay and painful root canal?

Oooh, tooth decay. That’s an interesting thought. The underbelly I’e been exploring recently is inspired by Heavy Metal music, particularly Black Metal. I love Black Metal!! There is so much amazing Metal out there and I’m so inspired every time I listen to it. I’m thinking about putting some Black Metal make-up in my last painting for the show, but haven’t decided yet. 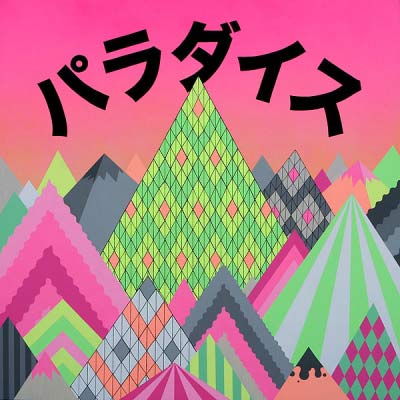 How do you get any sleep with your neighbors moaning all the time?

All the late nights I’ve been pulling for this show, its pretty easy to sleep through! 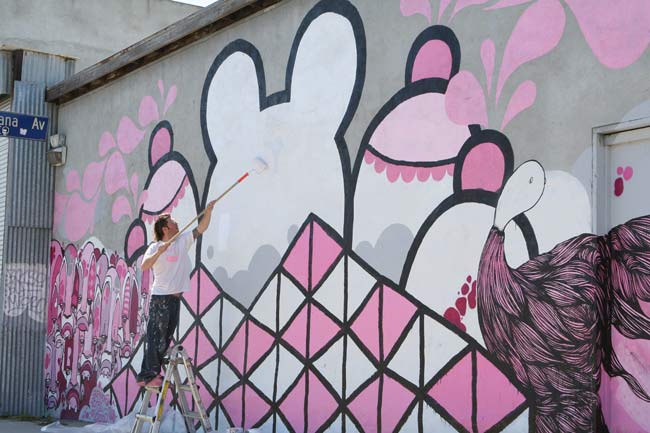