Currently on exhibit at the esteemed Grand Central Art Center in SoCal’s scenic Santa Ana sanctuary is an impressive overview of legendary artist R.Crumb The exhibit is curated by writer Todd Hignite, founder of Comic Art Magazine. The walls ring with energy, as R. Crumb’s Underground sounds off a victorious salute to local San Francisco treasure and comic genius Robert Crumb with an eclectic exhibit of early work, collaborations old and new, and the world premiere of his “spool” drawings. Join us now as we take a moment to graze the surface of an amazing talent and arguably one of the more powerful driving forces in the hike to where contemporary art, or “art” is today.

Thanks to the Grand Central Art Center staff for informative and educational experience, and Eric Stoner for the images. 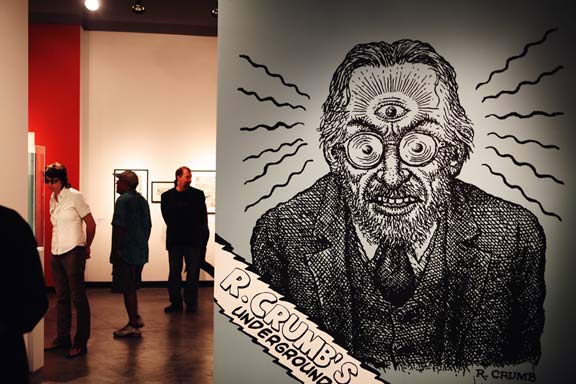 CURATOR’S STATEMENTTodd Hignite, Guest Curator / Exhibit organized by Yerba Buena Center for The Arts, San FranciscoRobert Crumb is the quintessential underground artist. His masterfully rendered comics and sketchbook drawings of the last forty years, markedly lacking in concession or self-censorship, offer a profound cultural critique filtered through demanding psychological self-reflection. Crumb’s art, which pioneered the transformation of comics into an adult literary form, addresses a plethora of personal and political themes within a multidimensional narrative framework. The work starkly depicts sex, violence, and race, among other subjects, offering revelatory insight into the human condition within the snarled jumble of a radically changing America. He combines the keen critical voice of the master satirist with some of the most impressive draftsmanship seen in contemporary visual art, and his work has proved endlessly insightful, controversial, and original. Although rejection of mainstream culture and high art has been a hallmark of Crumb’s adamantly alternative cultural vision, in the past few years the art world has cautiously embraced his work, which is exhibited in many of the world’s most prestigious art institutions and sold through blue-chip galleries. The irony of an outcast being the center of attention may signify to some an abdication of Crumb’s original iconoclastic fire. This sentiment misses the truth of the matter, which is that the art world, having moved beyond its pronounced prejudice against the twin embarrassments of narrative and illustration, has only now caught up with Crumb and his earthy, hand-rendered passions. Presented in a contemporary fine arts environment, this exhibition confers on Crumb the full range of importance merited by his wide contributions to visual culture. At the same time, the show recasts Crumb as a collaborative being in order to avoid the specious contention that Crumb’s rise was due to solitary genius. Crumb’s voice is realized through inspiring relationships with his era, community, and family. Neglecting these connections would distort the value he brings to the moment: the claim that life’s direct intrusion upon the art-making process is legitimate, however radical, idiosyncratic, and alternative those influences may be. 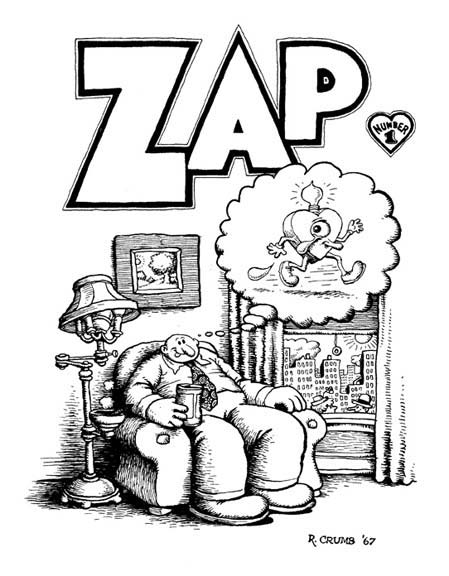 Robert Crumb began his artistic career in the 1960s. As an illustrator, Crumb is universally acknowledged as the founder of the underground comic scene. This is primarily due to his instigation of the legendary underground zine / comic book Zap Comix. After the success of the first issue, Crumb opened Zap’s pages to such legends as S.Clay Wilson, Robert Williams, and Rick Griffin. It is believe that the comix, which hit the stands in 1968 and lasted for 16 issues, have had a distribution in the neighborhood of 16 million. 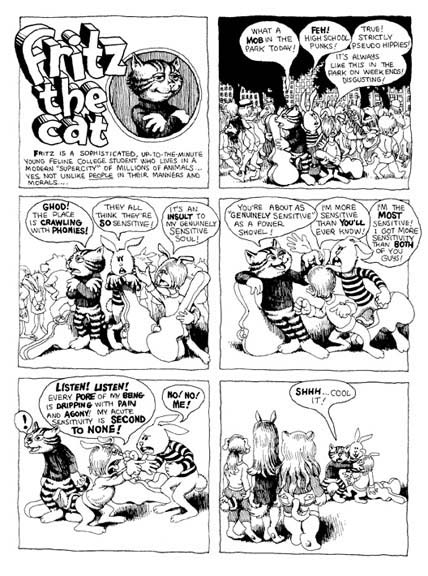 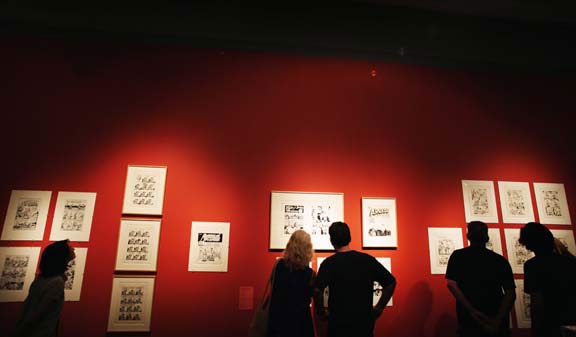 The exhibit features some true classics, including vintage original Fritz the Cat works. Fritz the Cat represents an extremely interesting and groundbreaking time in Crumb’s life and career. Being picked up by Ralph Bakshi, the animated adaptation of Crumb’s very raw and street-level reality comic received an X rating. Released in 1972, the film got rave reviews from Rolling Stone and The New York Times. Fritz the Cat became an overnight success, banking $100 million and becoming the most successful indie animated film of all time. (Although R.Crumb himself often scoffs at the film’s interpretation of the film and it’s production values, so he soon after killed Fritz in his comix-ed.) 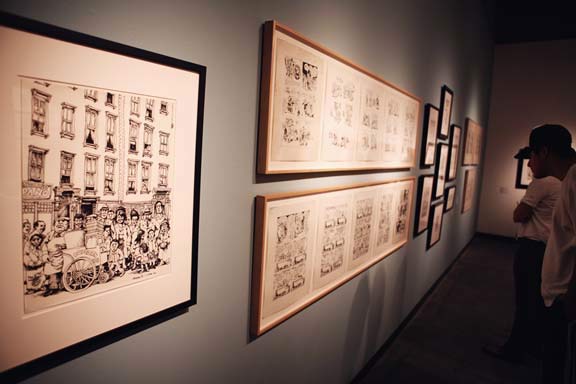 In 1994, he propelled to stardom with the Terry Zwigoff video documentary, Crumb. Extending far beyond comics (or comix), the YBCA traveling exhibit demonstrates how his work has grown in philosophical complexity, and highlights his collaborative artwork, including recent work produced with wife Aline Kominsky-Crumb in their Southern France abode. 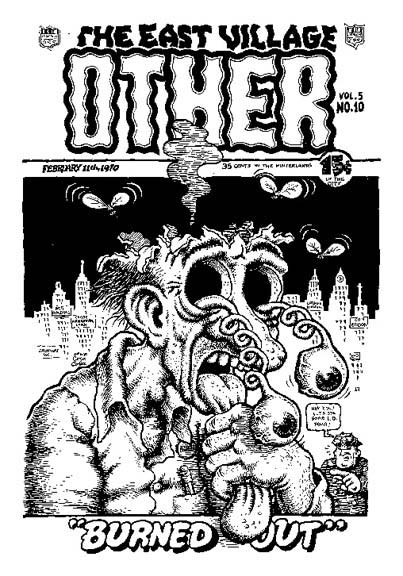 The East Village Other was an underground newspaper based out of New York City from 1960 – 1972. The important precursor to Zap Comix featured occasional covers and comic strips from Crumb and other cutting edge counterculture artists. 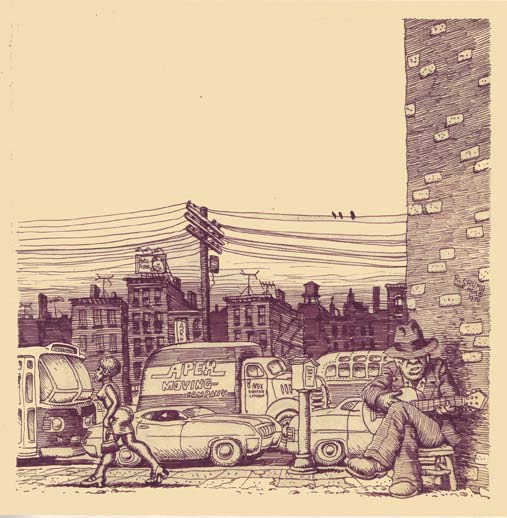 Crumb’s work often features his unique taste in music, drawing from blues, country, bluegrass. These influences were to play heavily on the soundtrack of his bandmate Terry Zwigoff’s 1994 film Crumb, which won the Sundance Grand Jury Prize. 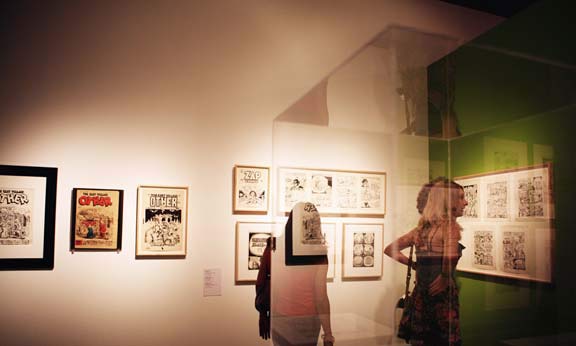 The exhibition features pages and pages of galleys and ink works from Crumb’s Rapidograph oeuvre. 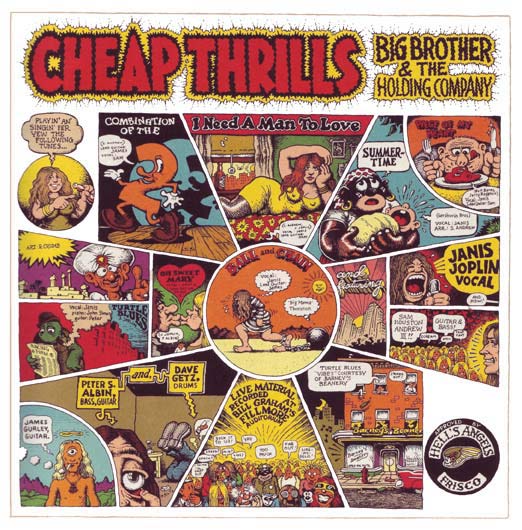 The exhibit also features the amazing cover for Big Brother and the Holding Company’s second album, Cheap Thrills. Crumb was chosen to make the art after the original cover was rejected by the record label (scene of the whole band naked on a bed). The artwork ranks #9 as Rolling Stone’s list of 100 greatest album covers, and the album served as the last featuring Janis Joplin on lead vocals. 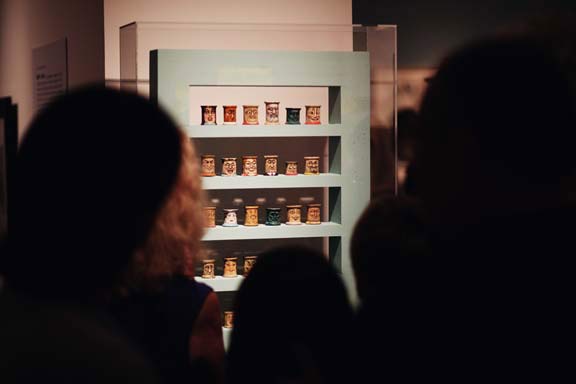