This evening, Friday May 15th, the two person show, “Devine Invasion” featuring the works of Kris Kuksi (HF Vol.5) and Andrew Jones opens at Toronto’s Meta Gallery. Hi-Fructose Vol.,12 will feature an in depth review of the show plus a few special behind the scenes shots from Kuksi. 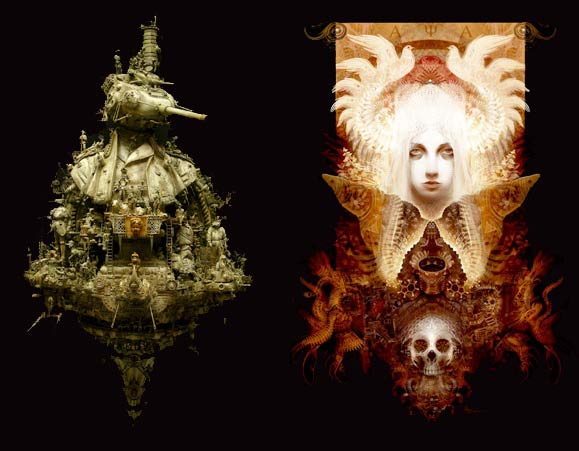 ***********************************
This exhibition marks the Canadian debut for both of these visionary artists, and is the first time a single space houses their respective work. This historic meeting of the minds assaults our senses with feelings of wonder and awe at the incredible beauty which emanates forth from the dark reaches of the soul.

Welcome to the Divine Invasion. These two words ring true while navigating the intensely detailed works of Kris Kuksi, whose sculpture-cum-diorama defies genre or medium, and of the digital masterworks of Andrew Jones, where themes of good and evil and dark and light are deeply explored through the post-apocalyptical visions and otherworldly inhabitants which permeate his aesthetic expression. Both artists’ works perfectly meld aspects of the spiritual with a sense of the tyranny in the world and the constant struggle for survival humans face. What emerges is the sense that the struggle these two artists portray is one of the spirit in us all and the inescapable need to express itself through the divine within. 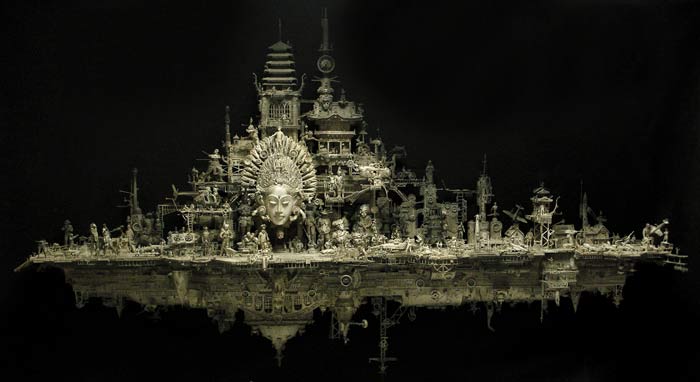 Working with a wide range of materials, ranging from rare and discontinued toys to small wooden sculptures to chess pieces, Kuksi spends countless hours scouring the internet and local hobby shops to unearth the injection-moulded treasures which comprise much of his stunning assemblage works. Some as free standing sculptures, others as wall hangings, the artists creates worlds within worlds of perfectly ordered chaos firmly rooted in the shadow realms. A war wages. Soldiers upon soldiers with turret-gun heads patrol the darkness while an ancient Hindu pirate ship masquerades as an aircraft carrier patrolling the waters of Kris’s subconscious. In one aspect surrealistic, the works by design lack a consistent narrative. The viewer is just as much a part of the artwork as the characters that inhabit the landscape of this truly bizarre and unearthly realm. Kuksi expertly treads a thin line between the symbolic and compositional cohesion of the works and the seemingly random and irrational nature of its subject matter. Various characters appear throughout – soldiers in this emerging paradigm, and evidence within Kris’ works that a greater story is being told. 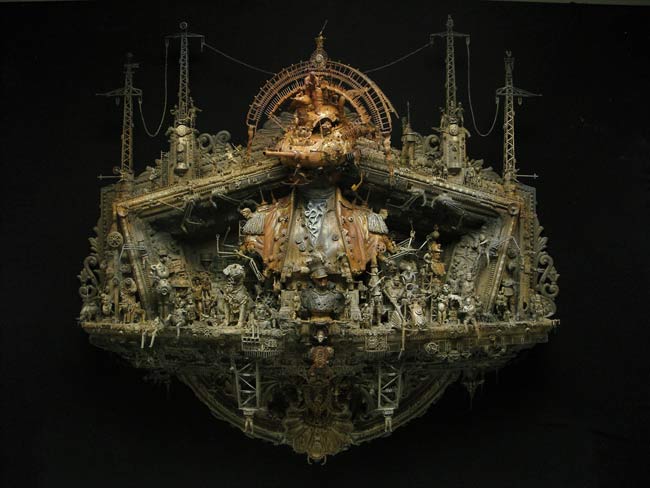 In a parallel world, one whose darkness is only made visible by the forces of light battling for survival, the potent works of Andrew Jones bring about moments of reflection on our own personal battles – our own demons, cast of allies and obstacles which lie ahead and behind every single one of us. Utilizing a more pronounced narrative element, Jones executes his finely crafted works in the digital realm. A highly accomplished traditional painter, Andrew’s visions are more lucidly and precisely manifested in a digital medium. A master in his field, what results are highly polished and meticulously executed artworks whose impact on the viewer reflects the artist’s own search for truth – what Andrew’s works so subtly yet powerfully point towards. 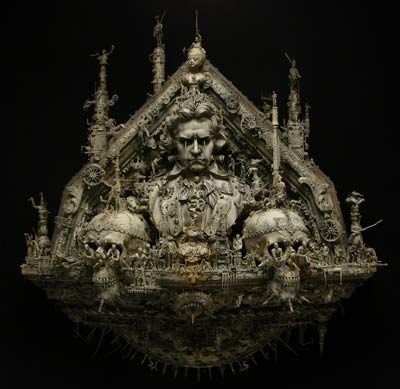 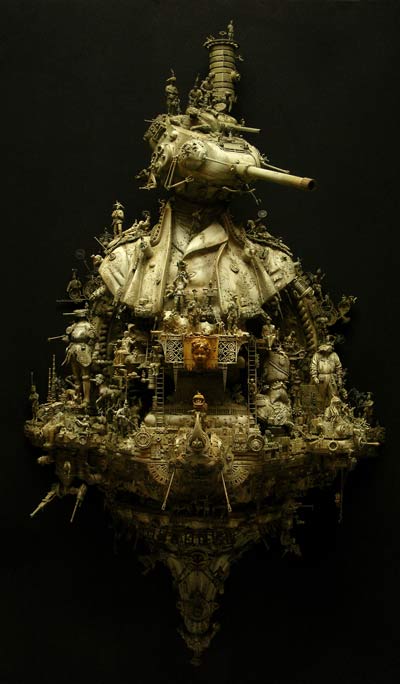 Kris Kuksi was born in Springfield, Missouri in 1973 and lives and works in Hays, Kansas. After earning his BFA and MFA in Painting at Fort Hays State University he began creating art full time, exhibiting in over 100 group exhibitions in America and abroad. Solo exhibitions of his work include Imminent Utopia, Joshua Liner Gallery, NYC (2008), Oblivion (with Richard Kirk), Strychnin Gallery, Berlin (2007); The Strange and The Fantastic, Leedy-Voulkos Art Center, Kansas City, MO, The Great Passage, Optic Nerve Arts, Portland, OR (2004); and The Within, Fraser Gallery, Washington, DC (2003). His work has been the recipient of several awards and is in many notable collections in North America and abroad. This is his first solo exhibition in Canada. 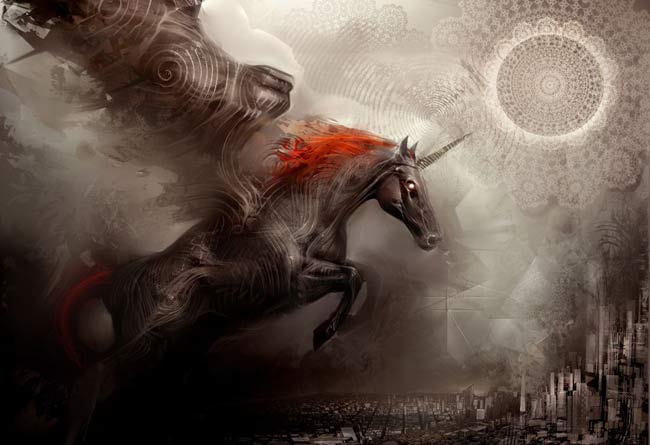 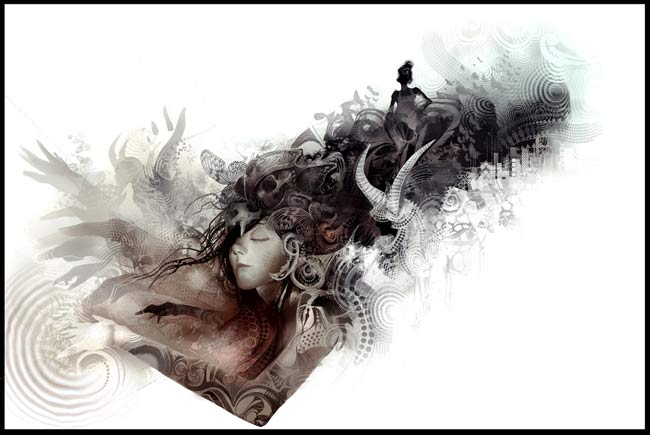 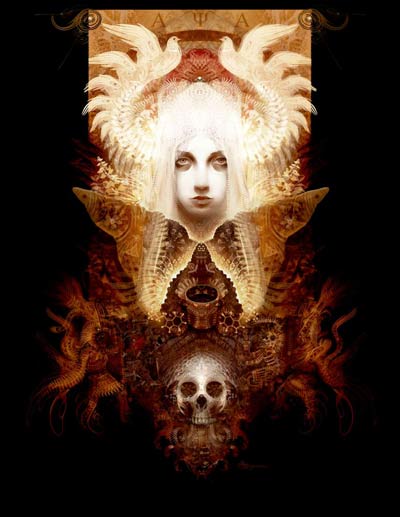 Andrew Jones – “The Divine Mother Ayahuasca”48 x 60 in. Fujiflex mounted on Dibond 2007
Andrew Jones was born Boulder, Colorado in 1977 and lives and works in San Francisco. Upon completion of his BFA in computer animation at The Ringling School of Art and Design in 2000 he went on the co-found Massive Black Inc, a leading concept art and design firm based in San Francisco with an outpost in Shanghai. Creating digital art since 1994 and a recognized pioneer in the field, Andrew has been instrumental in its technical foundation as one of a few artists chosen to beta test and work with Corel on its PAINTER digital software as well as design the artwork for the programs packaging. In addition, his support of the concept and digital art community further extends to co-founding conceptart.org, a 150,000 person strong online digital art community. Andrew is also very active in teaching and sharing his gift by regularly leading digital art workshops around the world and performing live in front of audiences by creating digital live paintings at various events. After having appeared in countless group exhibitions, this is his first major solo exhibition. 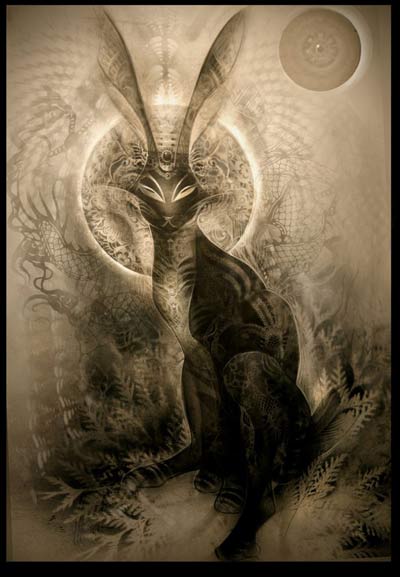 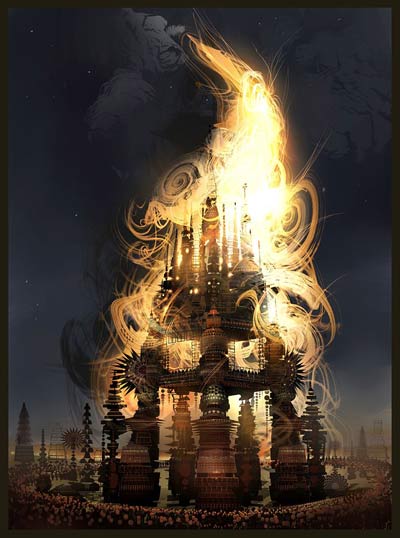 For additional information or to be put on the preview list for this exhibition please contact Jody Polishchuk at 416.955.0500 or [email protected]