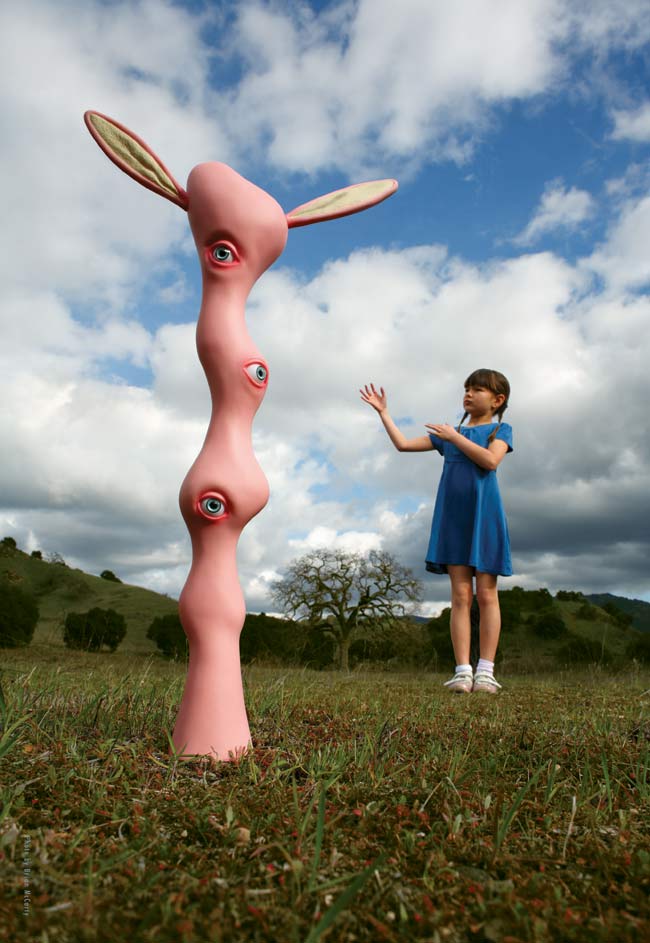 A 3-D representation of YHWH, an amorphous pink blobby bunny mini god with multiple eyes taken from Ryden’s painting of the same name, the figure is just beginning to reach the home stretch after dealing with multiple production companies as well as Ryden’s eye for absolute perfection with anything he is affiliated with.

“It seems like this should have been an easy figure to make” says John, “But actually it was incredibly difficult to mold properly. I ended up having to just walk away from the initial manufacturer and just write off all the attendant expenses because it just couldn’t seem to be made like we wanted”. After moving to second manufacturer – all the same problems happened again. It’s just a hard piece to pull out of a mold. Also, Ryden is very picky about the smallest detail being correct. This is based on his art and we knew it had to measure up, so we chucked prototype after prototype.”

All the same, John is thrilled that the project is finally coming to fruition. “I would do this project even if I knew it was going to lose money, because I have so much respect for Mark and his work. I’m really happy that out of everyone who pursued him for years to make a figure, I was the one he chose to work with.” 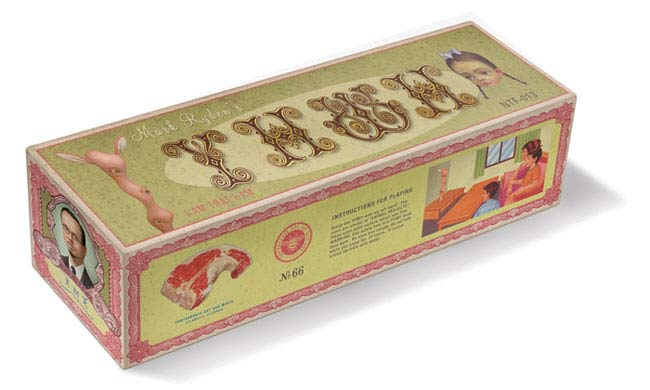 All that said, it is a gorgeous product produced in a rich pink, with high quality blue doll eyes rimmed in a deeper rose. There is an additional “special edition” that will be of 80 run in black and 80 in white, that will be signed by Ryden. The box itself is a piece of graphic confectionary itself, like a magical curio from a time gone by. Looking similar to a Chinese firework box, the box is embossed with gold leaf, and features hand wrapped paper. “We really wanted to make this look like it was an artifact from a long time ago, like something that had just been sitting on a shelf for ages” John says. “We really made an effort to make it look not contemporary as much as we could.” 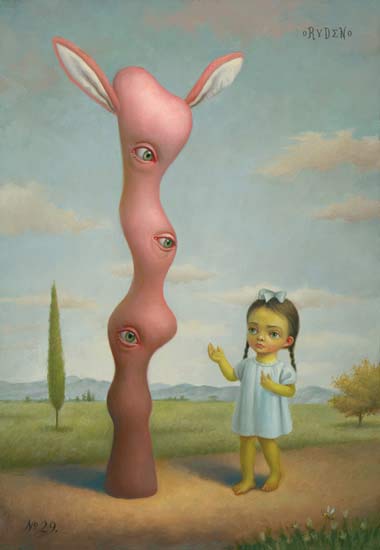 The original painting of YHWH

Says Ryden: “I love toys. I have collected toys for a long time and they are a majorinspiration in my work. There are so many obvious toy possibilities withinmy paintings, that many people have tried to persuade (begged) me to maketoys. I have resisted up until now because I didn’t want “toy production”to take over my life, which I fear it could. I was finally talked intodoing a toy by my son, Jasper. I couldn’t say no to him! I also let himchoose which image in my art to make a toy of. He choose YHWH. I put anhomage to Jasper on the box. Of course this all came about 3 years ago whenJasper was seriously into the “Urban Vinyl” craze. I hadn’t planned on theLONG process of making this toy. Now Jasper has moved onto to otherinterests (punk rock).”

Look for YHWH to make his appearance in summer of 2009. And check out behind-the-scenes shots of Brian McCarty shooting the photo: 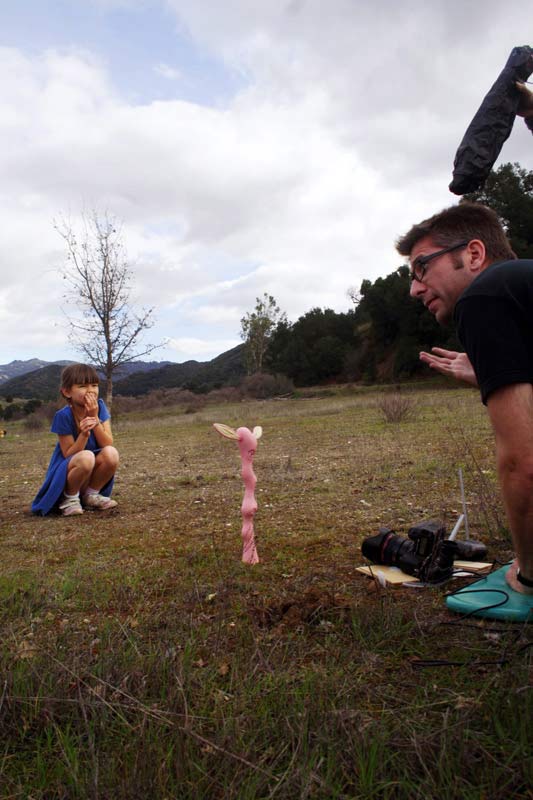 Toys factor heavily in the work of brilliant pop surrealist painter MarkRyden, yet Mark chose not to release any toys of his own until 2009. After anumber of false starts dating as far back as 2005, YHWH was brought intovinyl form by Long Gone John and his Necessaries Toy Foundation. I wasflattered to be asked by John to shoot the character for its premiere on theback cover of Hi Fructose Magazine.

YHWH is inspired by a god-like character from Ryden¹s Bunnies and Beesseries. When brainstorming the shot with Mark, it seemed a natural choice toplay with elements from the original painting ­ similar location, girl,lighting, and basic composition. The weather in Los Angeles had been lessthan cooperative with heavy rains and wind, but I was fortunate enough tohave a day with beautiful, broken clouds. They acted like a giant softboxwhile providing great texture for the sky. The only additional lighting camefrom a handheld flash with an improvised snoot.

A friend¹s 6-year-old daughter Thea was cast as my YHWH girl. Aside fromsimply being adorable and accurate to Ryden¹s style, Thea was perfect. Sheunderstood the character implicitly and needed little direction. The shootturned out better than I could have hoped.- Brian McCarty 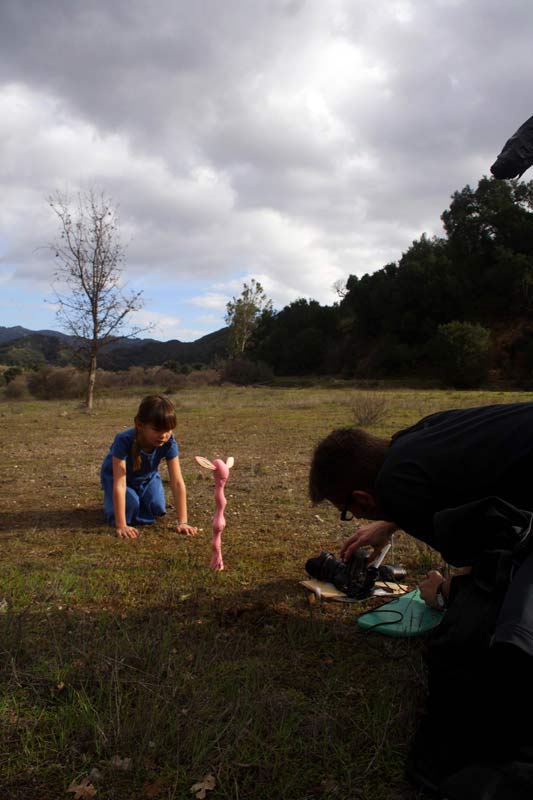 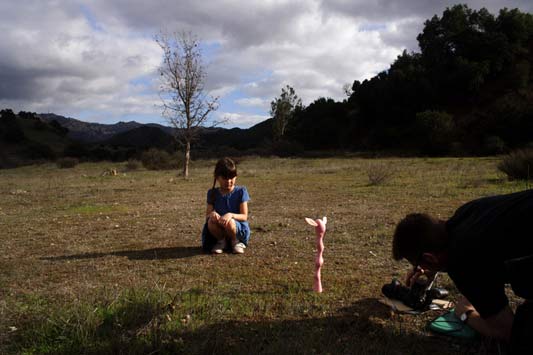