Hi-Fructose gets an exclusive preview of Los Angeles conceptual artist Justin Jorgensen. Join us as Justin answers a few questions about his work and himself, and still manages to rise above tying himself up with definitions. “Party Monsteris a show with lots of photos, but I don’t call myself a photographer,” he states. And once we pried a bit more, we found out why.

Justin Jorgensen, a Fargo, ND native and Los Angeles transplant, has been concepting art since he can recall. He is a fine artist, writer, photographer and character designer, not to mention having a healthy dose of intelligent and savvy humor. We manage to catch up with Justin on the very eve of his exhibition’s grand opening this upcoming weekend in Los Angeles. Justin takes a moment to share with us the finer points of his life, education and thoughts on the artist / viewer relationship.

So Justin, tell us a little about yourself. From whence do you hail and what takes up most of your time professionally and artistically?

I was born in Fargo ND, in 1974, I moved to LA in 1993 to go to CalArts. My freelance work varies from doing theme park concept design to branding, copywriting, and creative direction, to choosing exterior paint schemes for resorts and other large-scale architectural projects. I have new book projects in the works too and many more installations. I should really clean my apartment too.

Are you primarily a visual artist or photographer, or is it a pursuit of passion despite a daytime job interest?

My passion is in ideas. The media or medium I use is always dictated by the best way to execute the concept. “Party Monster” is a show with lots of photos, but I don’t call myself a photographer. When I wrote a book I didn’t consider myself a writer. I just learn the skills needed to execute a project. I always go back to “What is the best way to express this idea?” 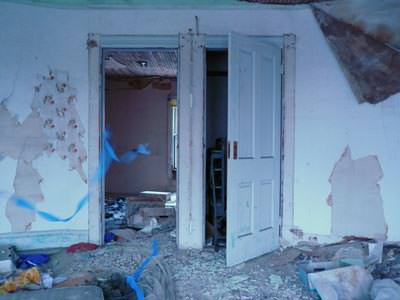 Did you attend an art school, and what do you make of the art school experience and output?

I entered CalArts in the art program and stayed there for two years before transferring to character animation, then in my fourth year I double-majored with scenic design. The art program taught me how to talk, how to choose my words wisely and say what I mean (which is no petty skill), as well as keeping the work true and focused. Character animation improved my drawing ability but more importantly taught me specifics about communicating visually (making sure your intention “reads”) and the basics of clear storytelling. Being in scenic design was an extension of that into three-dimensions. Everything I learned at CalArts didn’t show up in my practice until years after graduation. Trying to produce work while there was like trying to build a house on a boat in a hurricane. You’re being bombarded with ideas and theories and criticism and everything you know is being challenged and you have nothing solid to stand on to make a departure from. I needed to let that information settle and sift through it for a few years. 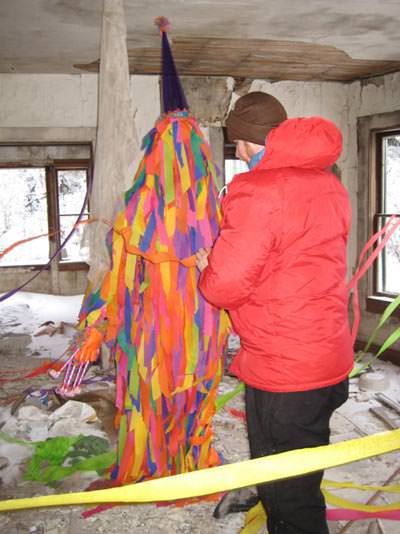 Tell us a little about your recent work, if you will. What was your motivation in creating your latest body of work, Party Monster?

It’s autobiographical, but I didn’t understand that when I began. I kept working towards what felt correct; in the year that followed I’d understand why those decisions felt correct. I don’t want to dictate how the work is to be read, but clearly the experience of my childhood and adolescence greatly influenced this work. And I don’t mean that in an only aesthetic way. In the end I had to decipher what is the appeal of these elements, why do they resonate with me? 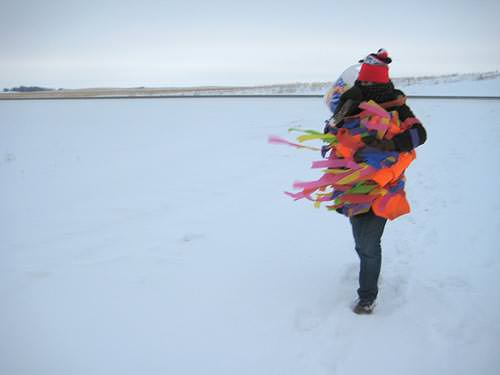 What all goes into the preparation of this installation and setup?

I started making some Photoshop sketches over my pictures of abandoned interiors to see if it gave the feel I wanted. Eventually I accepted that I needed a monster and had to fabricate the costume – which had to fit over layers of heavily insulated clothes. The shoot itself was a challenge because we were in the middle of nowhere in about 10 degrees for several hours. Then you’re worried about falling through the floor, or your camera freezing up, or the car getting stuck. I had to work fast. My brother who was in the costume couldn’t wipe his nose and the entire front of the costume was wet with snot when we were done. 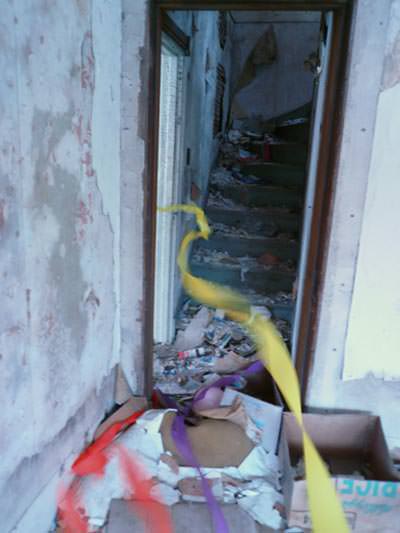 When all is said and done, what would you like the viewer to take away from the Party Monster experience?

I hope it haunts them. 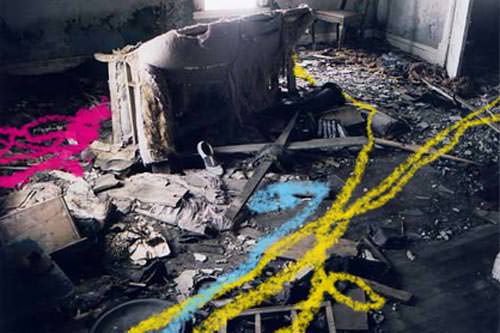 Do you already have an inspiration or idea for your next undertaking?

I have a decade of notebooks filled with installations and experiences I can’t yet afford to realize.

And just out of curiosity, if you could produce a body of work anywhere in the world, what would it consist of and how would you envision it being received?

This is easy. A giant 300-foot tall castle next to I-94 about an hour west of Fargo. North Dakota has a history of building big things in the middle of nowhere. We have the world’s largest cow, buffalo, turtle made of tractor tires, and we used to have a giant King-Kong-sized gorilla called Og. My castle would be a 2-D flat. You’d see it from miles away. When you finally get to the base you’d see it’s 12 feet off the ground so you can’t reach it. It’s just a giant looming unattainable thing. It’s simultaneously inspirational and a big “Fuck You!” It’s indicative of my relationship with North Dakota. I think of this piece often. 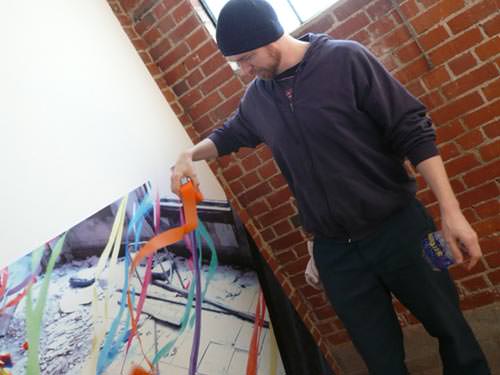 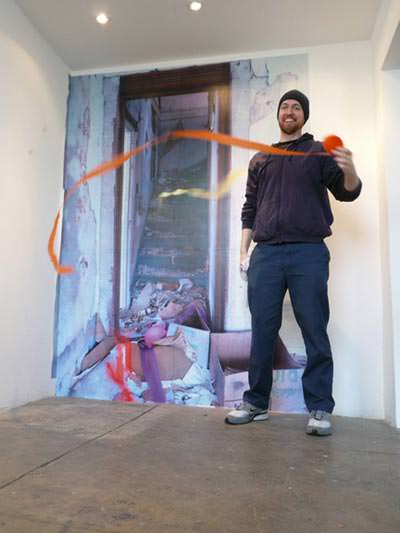 Justin Jorgensen’s impressive mixed media concept exhibition opens this Friday, March 14, 2009. The site is set and being prepped, and is rumored to have a giant cube of ice in the center of the room. This is gonna be good…

-Brought to you by Nathan Spoor.