As of HF Vol.10, we were introduced to the greatness that is Chris Ryniak. But what we might not have known, is his dexterity with the dimensional medium. I simply had to know, how does he do it? Why does he do it? Where does he find the time to do it? Even though he does his best to dodge the big questions, we manage to get something coherent from him, some exclusive shots of the studio, works in progress, and a bit of a peek into the natural state of one of the more intriguing characters in the art cosmos to date… 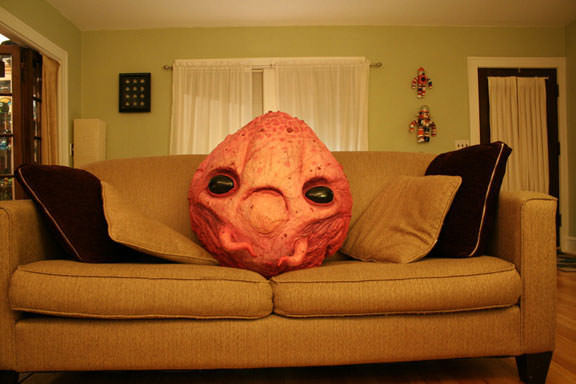 Chris, tell us a little about how you found this talent, what got you going with sculpts and was this discovery before or after you were established as a painter or illustrator?

I’ve done dimensional stuff on and off since high school, but never really got going on it along with my gallery work until about 4 years ago when I was asked to customize a Dunny by Tristan Eaton for a show in Detroit. It was just a little tiny thing, but people saw it and it just snowballed. I finally put two and two together for my show at Thinkspace a couple years back to do some of my own sculpts, and the rest is history. 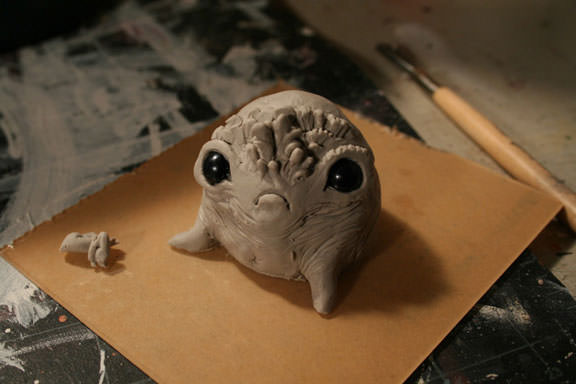 Your sculpture pieces often reference hilarious poses or outright cuteness in some form, do these come naturally or do you find things in nature to reference?

I reference my teeth a lot. The forms are fairly organic, and often have animal elements to them, like elephant skin texture and such. It all depends on the piece. 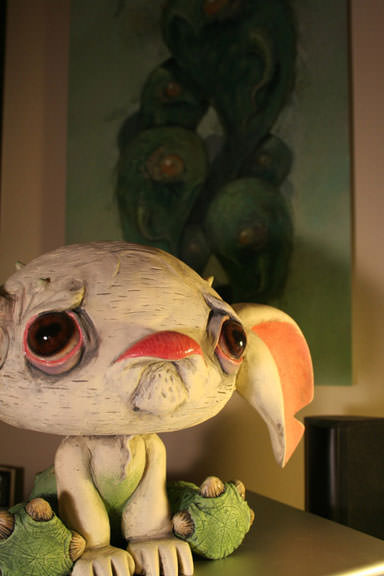 On finishing a piece built from something sent to you by an individual or for an upcoming exhibition it barely resembles its origin, taking on a truly Ryniak life of its own. Do you enjoy having something to build from, or do you find yourself having a preference to original ideas for 3D works? 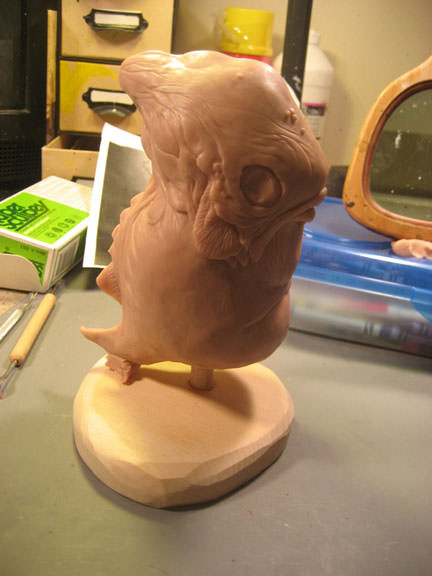 I enjoy both approaches equally, to be honest. When I get a vinyl figure to customize, I never look at it the way it was intended to be displayed. I flip it upside-down and on it’s side, see if the arms can become ears..etc. So the figure is whatever I want it to be anyway, it’s a fun way to do things I wouldn’t normally do though, work with new shapes.

The original sculpts are approached as organically and spontaneously as possible, they kind of sculpt themselves once I really get moving and my brain turns off. If I think about things too much and analyze the task at hand, things go wonky-poop.

Maybe you could give us a little insight, for those of us not versed in sculpting. How do these creations come about physically, how do ya build ’em? 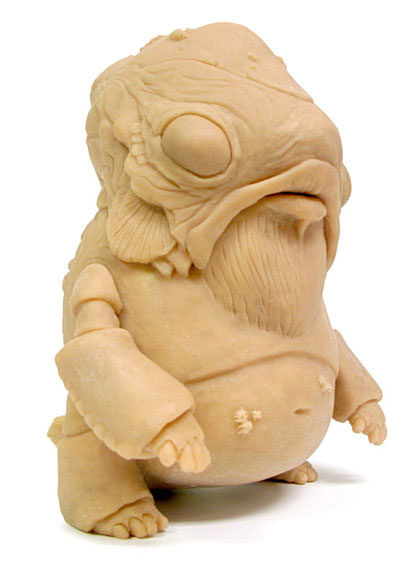 Well, for the larger junk, I build up the forms using insulation foam and tinfoil. Once I have a pretty good under-structure, I start applying the Epoxy clay…which is awesome stuff that has a lot of pros and cons, toxic, nerve damaging cons. All that aside, I work in fist sized chunks on the larger sculpts because the clay starts to set in about 2 hours (another con). The PRO is that it air dries super hard and durable with no kiln firing or having to make molds and cast.

I still use Sculpey for the prototyping for now, looking into some other materials and methods for all that action. 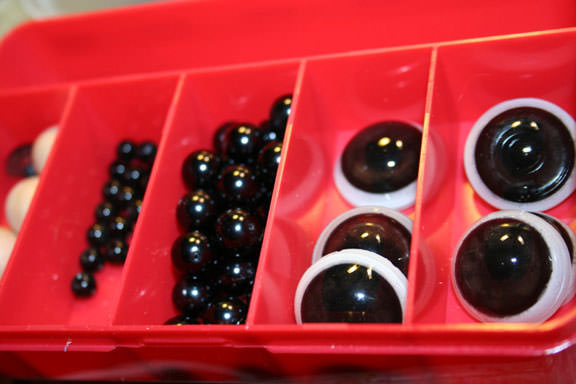 Tell us a little about projects in the making, things we’re about to see, perhaps. 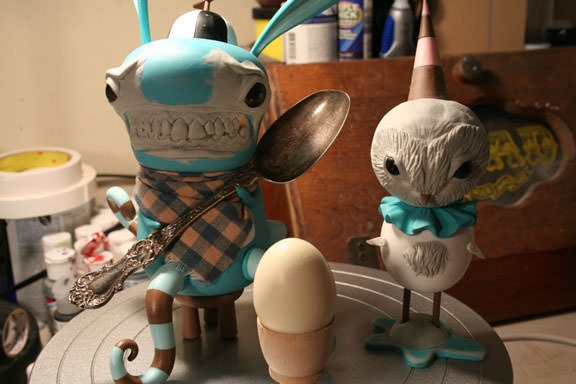 Well Nathan, I’m glad you asked. (see that? it was almost like we were talking for real!)First off, Rotofugi (awesome toy store in Chicago) along with Squibbles Ink approached me last year about being the sculptor for a Midwest artist-based monster toy series. The conversation went like this as I remember: 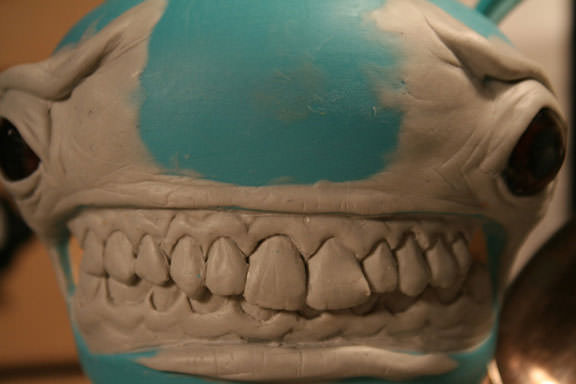 “Kirby (Rotofugi): Hey Chris you wanna sculpt some monsters for us?

Chris: Monsters? No, I hate monsters, that sounds all kinds of boring and not fitting at all of my personal interests, how dare you!!! “

That’s how I remembered it anyway, so here I am now, with my first figure in the series in China being prepped for production. I’m currently working on the sculpt for the second figure. You can check out the progress at thelakemonsters.com

Second: Finishing up a custom Benny & Red bird set by Kathie Olivas for a commission.

Fourth: Trying to get a limited edition resin off the ground for my show in Montreal…still pending.

Fifth: Speaking of my show in Montreal, Planning on at least two original sculpts for that one.

No Chris, it’s never enough and now you’re old enough for me to tell you that. Do you have a favorite sculpture you’ve made, one that stands out that you’re proudest of? 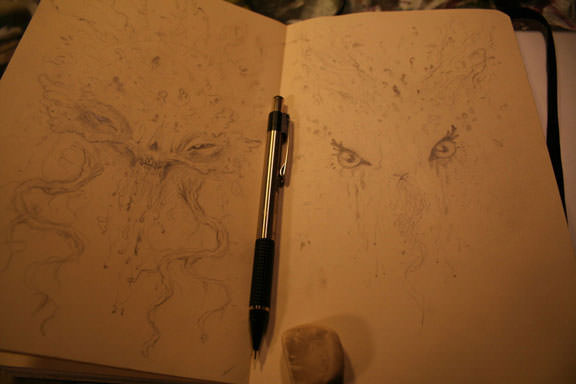 Hmm, I think the big giant pink blobby that I did for my show at Thinkspace Gallery. He’s the most successful sculpting that I’ve done, as well as the most ambitious. But most of all, I received a really heartfelt email from a girl in LA who kept going back to see it because it was helping her cope with her bipolar disorder. Those are the kid of things that we never plan for as artists, but humble us and make us feel relevant, more so than selling work, to me anyway.

Do you have a specific time of day or place in your studio that seems the most productive for this sort of creating? 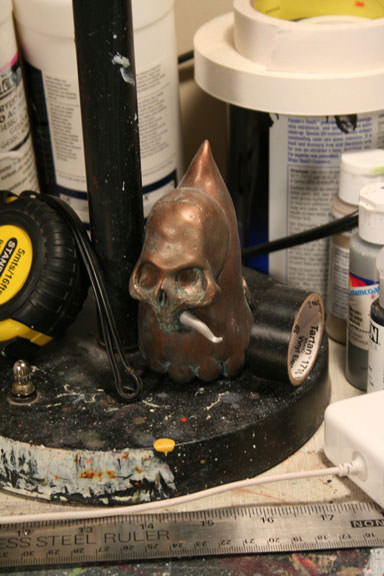 I don’t have much of a choice in the matter unfortunately for the time being as I still have a full time job. So for the most part I start working after the kids go to dreamland and burn it until my eyes don’t work anymore. That and weekends. My studio is where most of it goes down, but I have a great little woodshop in the basement and space in the garage for bigger stuff. The whole house turns into a studio when things are in high gear.

If you had all the means to transform your dream idea into reality, what would that piece be, or where would you have it installed? 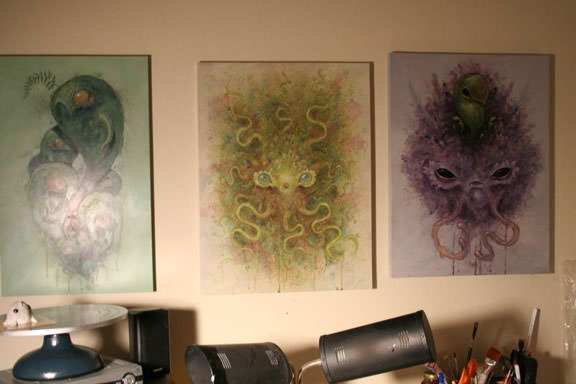 Whoa, that’s a great question! I had a few ideas, one was to build a large room in a warehouse that had a HUGE(15 feet high or so) aquatic shark-like creature in it on the floor, with barley enough room to walk. That and an entire haunted house.

Does the Chris Ryniak have any plans for an exhibit revolving primarily around your sculptures?

I have plans but no forum for it as of yet. We’ll see what the future holds. The interest seems to be more on the paintings right now, hopefully I’ll be able to work across all of the mediums seamlessly in the future.

Any closing thoughts, or advice to artists interested in pursuing this particular creative outlet or artistic expression?

Don’t doubt yourself, don’t be afraid to fail. Jump in with both feet and see where it takes you.

(I also hounded him for any kind of source material he could spare us. Like an actual peek into what sort of things he has surrounding him at home or inspirations throughout his studio. Here’s a few of the choice offerings…) More===>

Mr. Fredrickson, once a proud teacher of parenthetical mathematics in Peru.

Ambassador Chillizard the first, mascot of Ryniak Manor and bringer of the good luck.

A fine specimen of a once proud holiday fare, served with cranberries if I’m not mistaken.

Oh, the humanity. It’s not giving up on the mange, and seems to be shedding an ear.

That buddha guy gets around, doesn’t he? Apothecary of Ryniak Manor. Notice the crazy sculpture guy on the very top.

-Brought to you by the goodness of artist Nathan Spoor