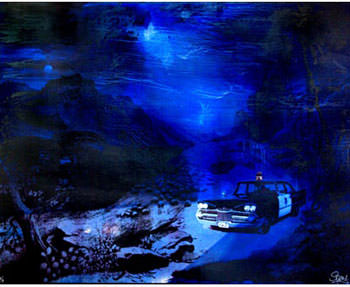 The legendary screen-printers Chuck Sperry and Ron Donovan known together as Firehouse have been mayhem-making for the past twenty years. They are also featured in the soon-to-be-released documentary film “American Artifact” which chronicles the rise of American rock poster art since it’s birth. And last but not leastly, Donovan and Sperry have a fantastic show up at San Francisco’s Varnish Fine Art. The show exhibits a plethera of collaged posters on canvas as well as silkscreens on wood, like the brooding one shown above by Chuck Sperry entitled “Who Watches the Watchers.”