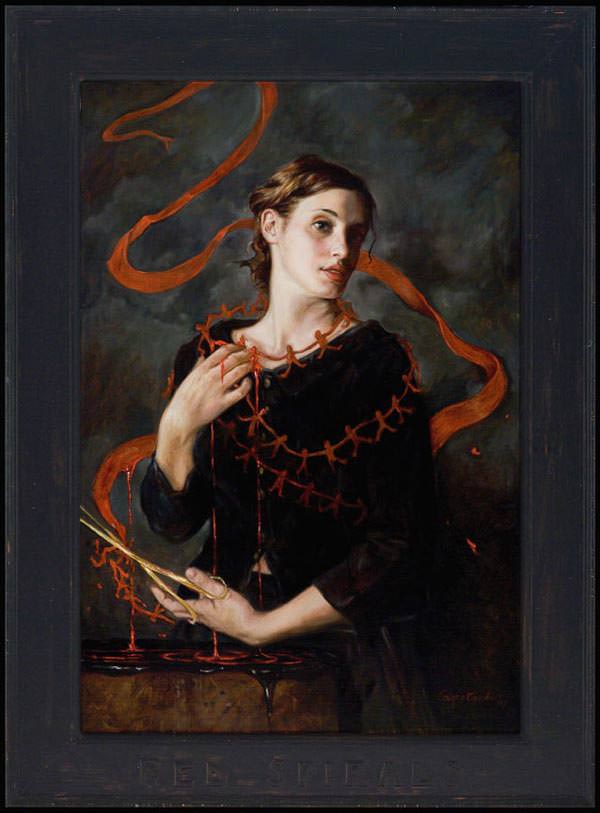 Addressing a host of environmental disasters, Potocki’s work depicts powerful themes such as drought, fire, oceanic pollution and global warming. In Thaw (oil on canvas, 2008) a female figure melts helplessly along with the polar icecaps upon which she lays while honey bees hover nearby, bearing silent witness to her plight. Corrupted Mother (oil on canvas, 2007) recalls powerful biblical imagery as Mother Earth, complicit in her own destruction, presents an apple to a snake. In Plastic Vortex (oil on canvas, 2008) a figure struggles in vain to free herself from the North Pacific Central Gyre, a floating mass of garbage twice the size of Texas… 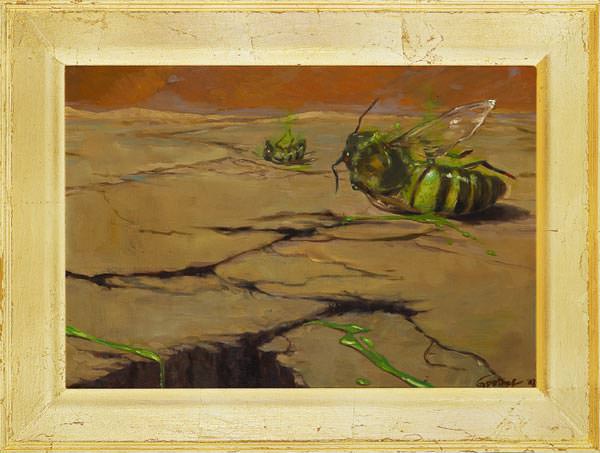 Technically brilliant and emotionally riveting, Potocki’s paintings have been displayed in Symbolist and Surrealist exhibitions worldwide, sharing wall space with such celebrated masters as Gustav Klimt and Salvador Dali. Most recently, her works have been featured in several groundbreaking shows including In the Land of Retinal Delights: The Juxtapoz Factor at the Laguna Art Museum, Venus at the Roq La Rue Gallery, Art Chicago and the Palm Beach Art Fair…”

Hi-Fructose: Is there a difference between what people tell you about what they see in your art and what you express with it?

Gail Potocki: Often there is a difference and sometimes I find what other people think to be an even more interesting idea. They are reacting to my visual image, but adding ideas from their lives and personal viewpoints. I learn quite a bit from having a dialogue with the viewer about the work. 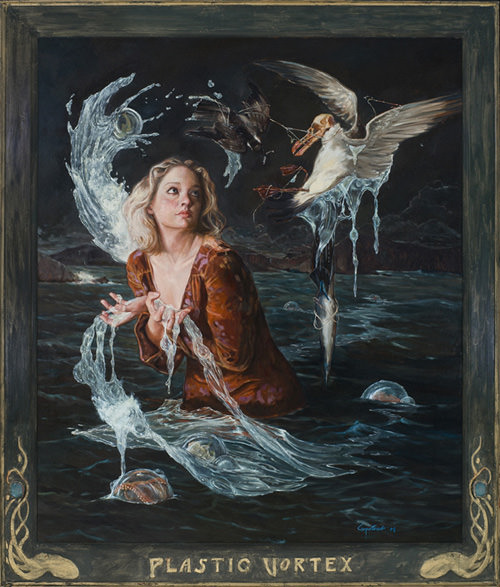 HF: Can you talk about some of the themes in your art, for example, “The Corrupted Mother” and the recurrence of apples and bees in your work?

GP: For the last few years I have focused heavily on environmental themes with my work. I think the stresses humans are putting on the ecosystem are the most serious problems we are facing, so it is difficult for me to paint about more personal issues or to do humorous work. I am always thinking about how fragile the world really is and how close elements of it are to collapsing.

I think of the apple as a symbolic representation of the earth and, of course from the story of the Garden of Eden, as paradise. In the painting “Opened Apples” for example, a woman is taking bites out of apples and throwing them to the ground. It represents humans’ careless disregard for the natural world and wasteful consumption. The idea of “Opened Apples” made me think of how we have savagely bitten into the symbolic “earth” apple and left it to turn brown and rot. Also, when I thought of the title I was thinking of the opening of Pandora’s Box as a metaphor of what we are doing by “opening the apple” and unleashing unforeseen consequences. 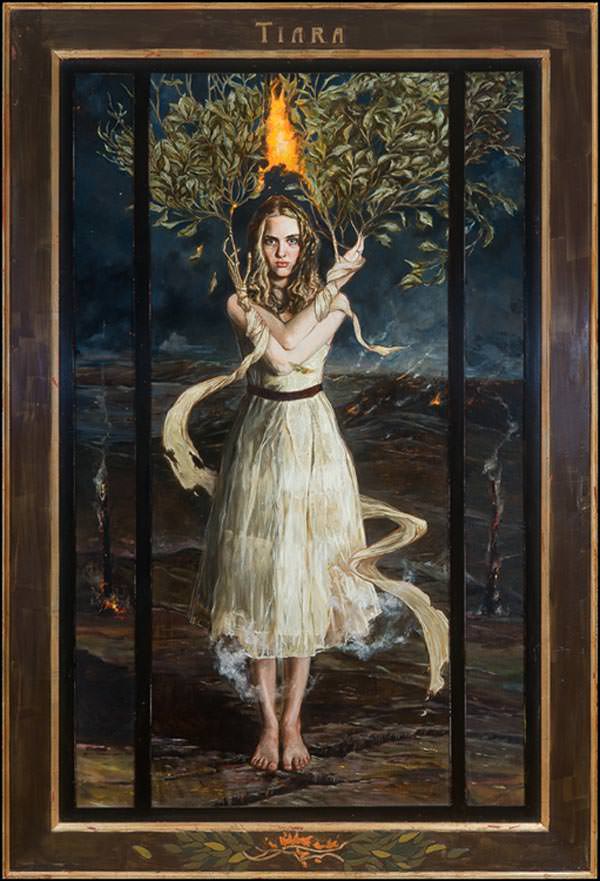 I’ve addressed my concern with the plight of the honeybees quite a bit in this body of work. The mysterious loss of such a huge percentage of the bee population is one of the most alarming collapses and seems to be happening so silently with little press or media concern. I wanted to show the importance of this issue by making the bees larger than life while meeting their death in mysterious ways that I have imagined. In “Corrupted Mother” I use the woman as a representation of an ecosystem so corrupted that it is turning against itself. She is handing over the apple (paradise) to the evil aspects of humanity (snake). Even the snake is corrupted and is a mutation with two heads. In the background a polar bear walks through increasingly larger hoops of fire as a symbol for a rapidly warming planet.

HF: What catches your attention?

GP: The sky often does, which is problematic when I am driving. I am so intrigued by its varying colors and variety of clouds—particularly in the fall with its intense blue and raking light. At least that is the way it is in Chicago. 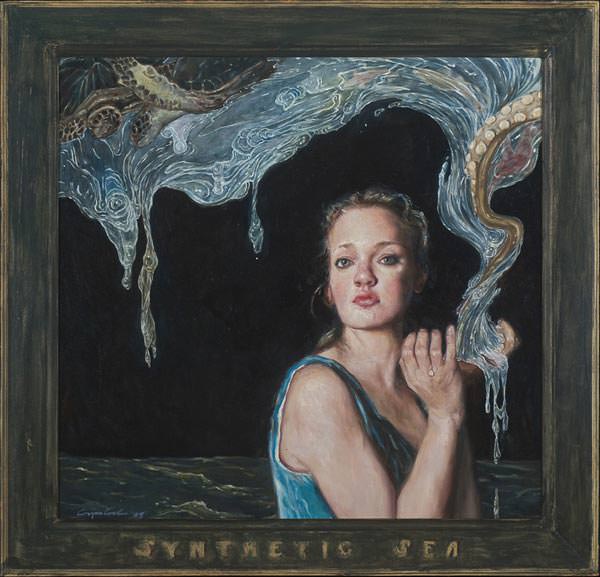 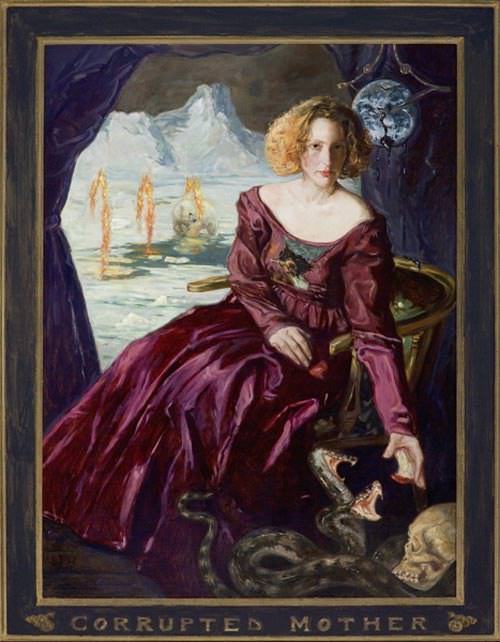 HF: Do you have a favorite painter or one that you feel influences you the most?

GP: Some of my favorite painters influence me more with mood than with technique. The Belgian symbolist painter, Fernand Khnopff, is high on my list. When I discovered his work I knew I wanted to be an artist that could convey that strong of a poetic and profound silence and sense of mystery. That is still what I try to infuse in much of my work. I also love Anthony Van Dyck for his elegant portraits and Edward Munch for the way his paintings can carry a sense of anxiety so intensely. 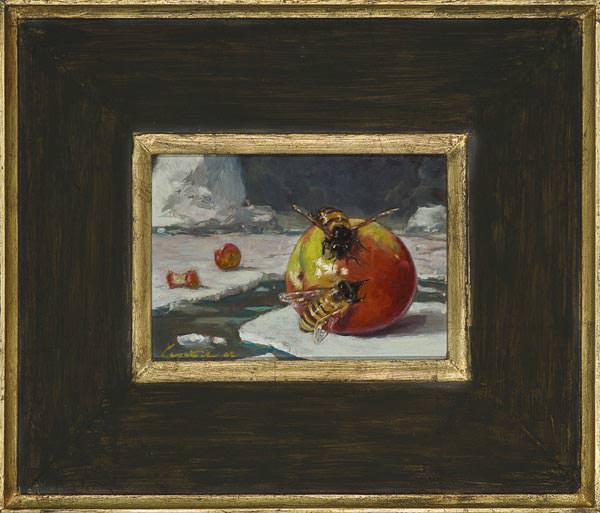 HF: Can you talk about how you developed as an artist.

GP: I was a very late bloomer and did not start seriously drawing and painting until I was 40. I thought about a lot of the ideas that are now in my paintings way before then, but didn’t find my voice until much later. *

Billy Shire Fine Arts, an internationally renowned gallery just outside of Los Angeles, is the most recent endeavor of art world heavy-weight Billy Shire, a major figure in the establishment of Pop Surrealism.

In 2006, Potocki was the subject of The Union of Hope and Sadness:

The Art of Gail Potocki, a stunning hardcover by art historian Thomas Negovan. A second book, featuring the art in Opened Apples, will be released on December 15.