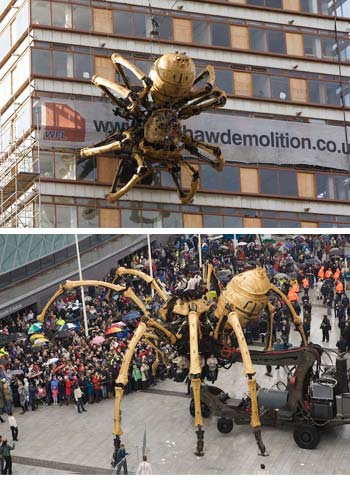 They report: “Yesterday commuters arrived at Lime Street to find a gigantic mechanical spider clinging to a derelict building next to the station. A group of French specialist researchers announced that they had been observing the creature, apparently made of steel and wood and a thousand times the size of anything in nature, for weeks. It appears to be female, around 13m tall, and has been dubbed “La Princesse” by the team. The scientists believe the creature may be about to hibernate, and are attempting to prevent it falling into an inert state, as they are concerned at the potentially catastrophic results of the spider laying up to 1000 eggs. Scientists have therefore removed the spider from the building and taken it to a research base established at the ACC, at Albert Dock in Liverpool. On Friday 5th September it is expected that they will attempt to wake it, under controlled conditions, at 11:30am…”