The inimitable Martin Wittfooth shares the begining to-end-process of one of his newest paintings as part of his upcoming solo show, Sandcastles in the Tide at Copro Nason gallery August 9th. 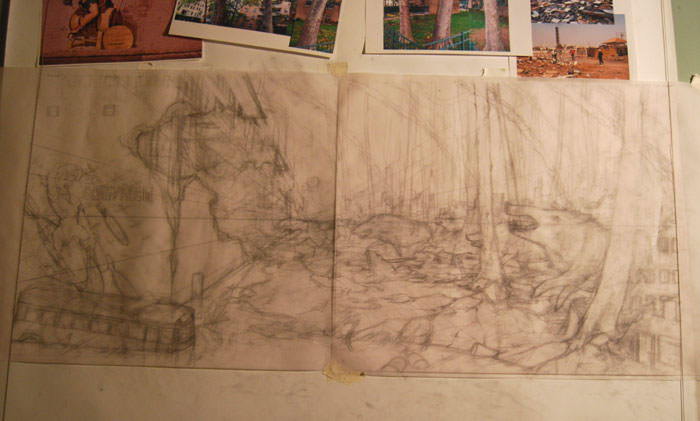 1. I start off with a large sketch (in this case a quarter of the size of the final), where I try and work out most of the elements that will make up the painting, their placement, and the general composition of the piece. I tend to belabor the sketch-stage a lot, so what you’re not seeing on this mess is a countless amount of eraser marks, but trust me, they’re there.

2. Once the sketch feels right, I move right into paint, and I hit the whole thing in one shot, trying to cover up all the white of the canvas in one go. This underpainting will act as a kind of blown-up sketch for me to work off of, and from here on in it’s just a matter of building everything up gradually. 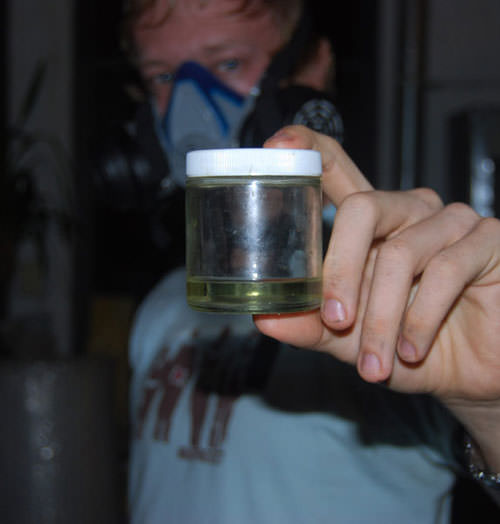 3. For this first stage, just to loosen up my paints all nice and buttery, I use a home-brewed mix of solvent, which is mad toxic – hence the mask -but works just swell. 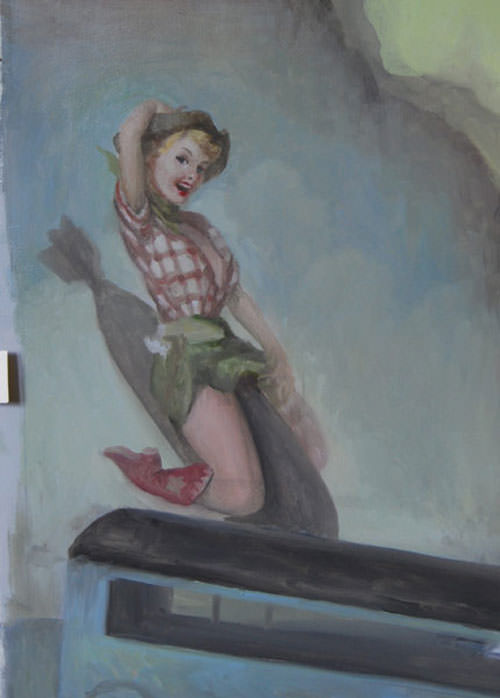 4. I’ve always loved pinups from the Golden Age of the genre: 30s-50s style pinups. They’re really great: cheesy as hell but painted with seductive brilliance. My favorite artist from the heyday is Gil Elvgren, who I borrowed this girl from (her top half). I wanted to play with both a style and subject matter that I don’t usually deal with, and at the same time get some Cold War-era propaganda imagery going on. 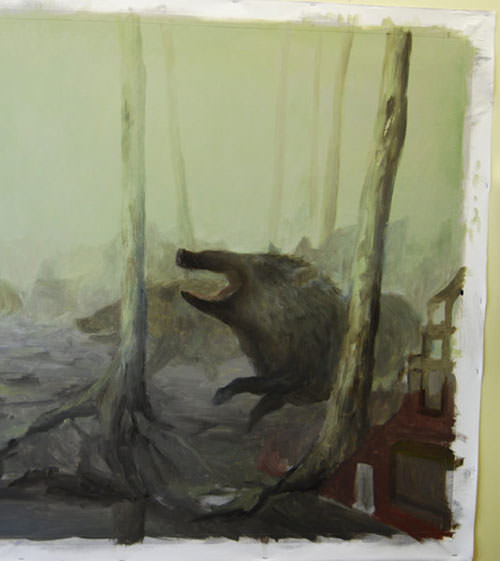 5. The army of boars charging in from the right were just mapped in at this stage, and I’m starting to establish a rudimentary hierarchy of values and contrast as things move back in space. 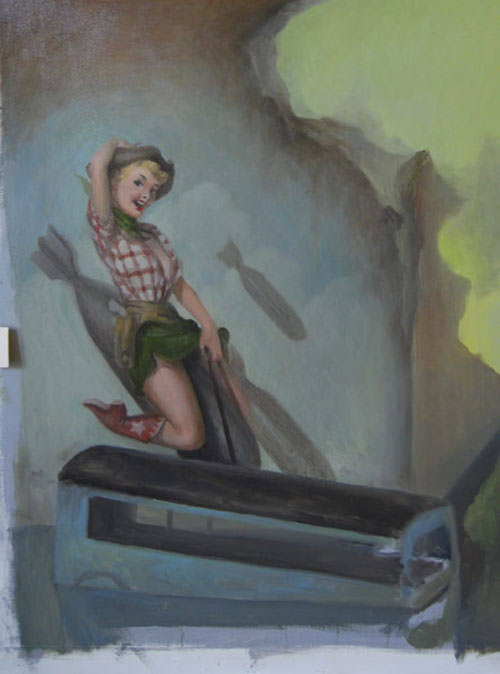 6. The girl is starting to be done here, and I’m moving on to add other stuff to the mural as well. 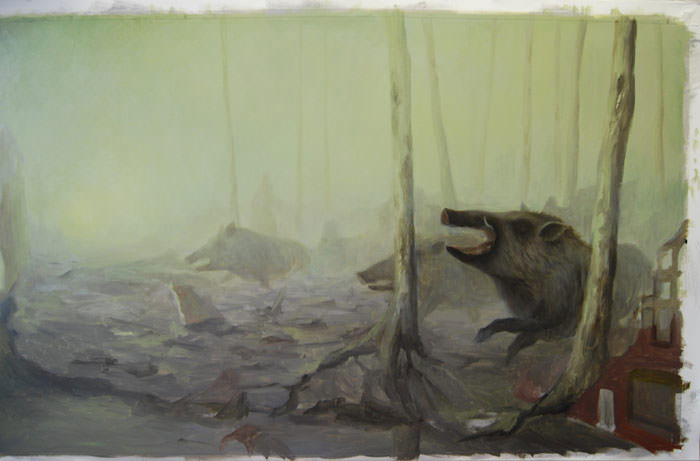 7. Starting to pull out some details here and there on the boars and the trees. Each day working on the piece is really a matter of subtly pushing stuff back, and pulling those things closer to us forward, playing up or down the amount of detail, and softly working in some atmosphere everywhere. 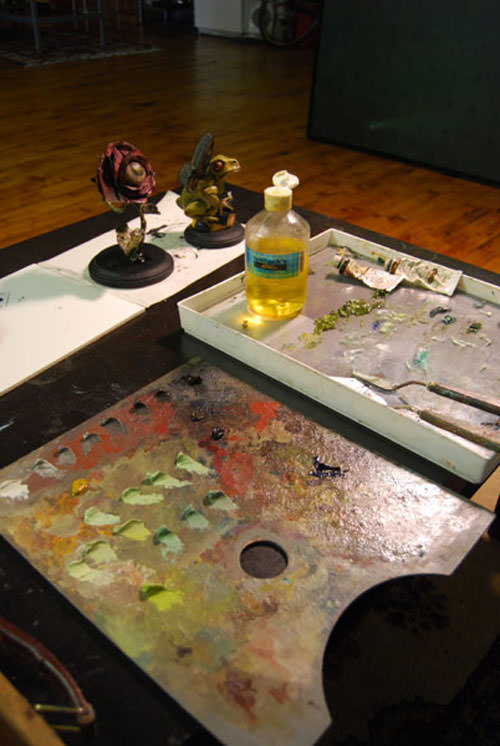 8. At the start of a painting day, I’m mindful of what part of the painting I’m going to hit in that session, and then premix out strings of color accordingly. I also keep a staple of common colors on my palette, then intermix between everything as I see fit. This day, with all the greens mixed out, I’m mainly working on the peasoupy sky, smoke, and atmosphere.

9. At this stage, everything has another layer of color on it (to be followed by a few more over time), and things are generally getting more resolved. 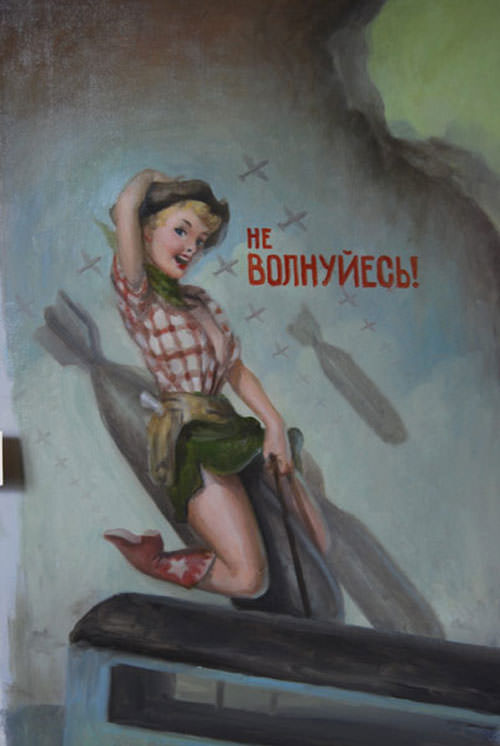 10. Our pinup lass is done, and now is left to dry, since the next stage is to get a nice brick-texture layer on her to place her on the wall. The Russian reads, “Don’t Worry!”

11. There is another layer of paint on pretty much everything again at this stage, and the sky is starting to have more depth of color. 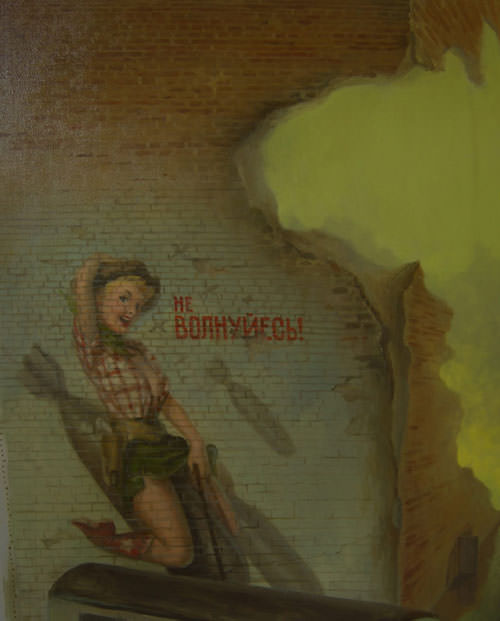 12. I have worked a brick “layer” over the whole wall, in an attempt to distinguish the pinup and the bombs as a mural. I love to paint the man-made in various states of decay, and bricks are no exception. 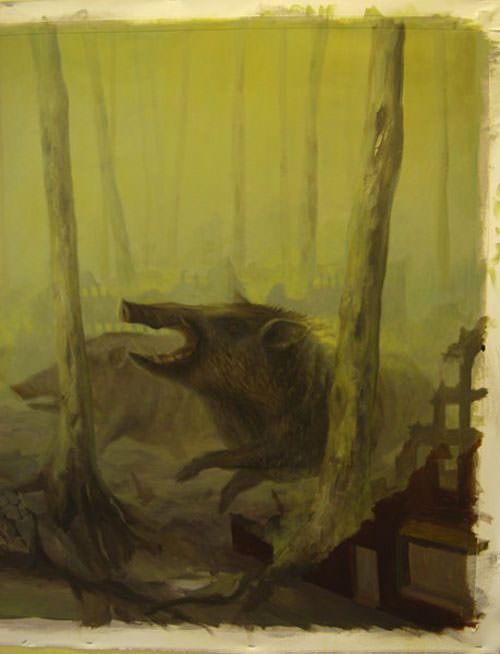 13. The boars and background are starting to emerge somewhat more confidently. I also decided to light a couple of the boars on fire. 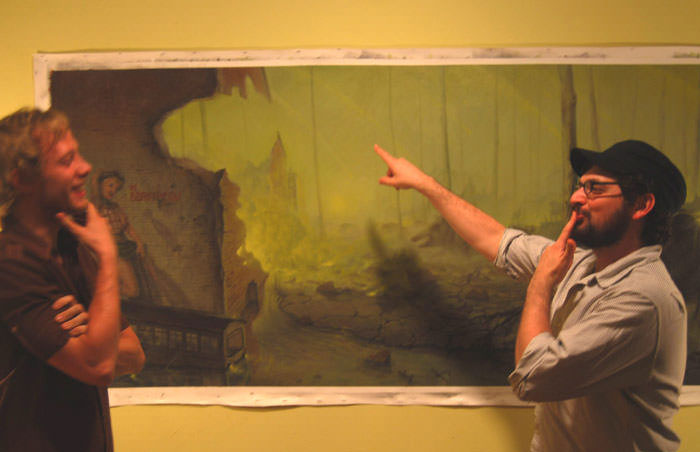 14. My good pal Jonathan Viner dropped by during the late stages of the painting for a little crit. This was about a week before I had to wrap it up with this piece, and his advice really whipped me into good shape.

15. And so, a week and change later, I called it a day on the painting, and here’s the final, left to dry and then shipped down to Copro Nason. 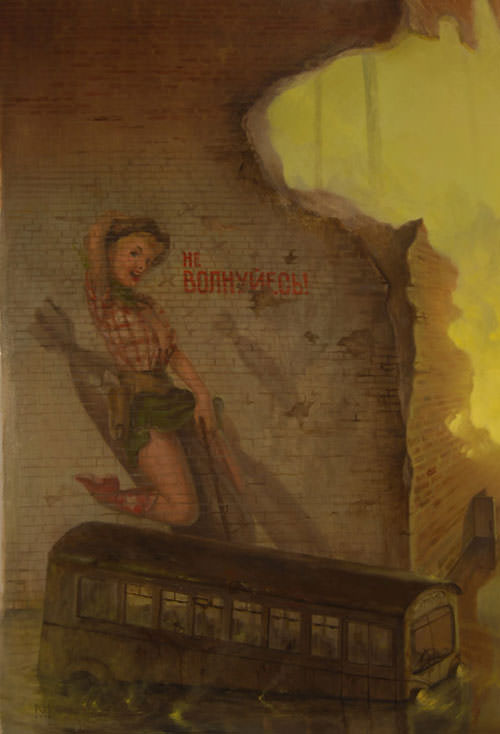 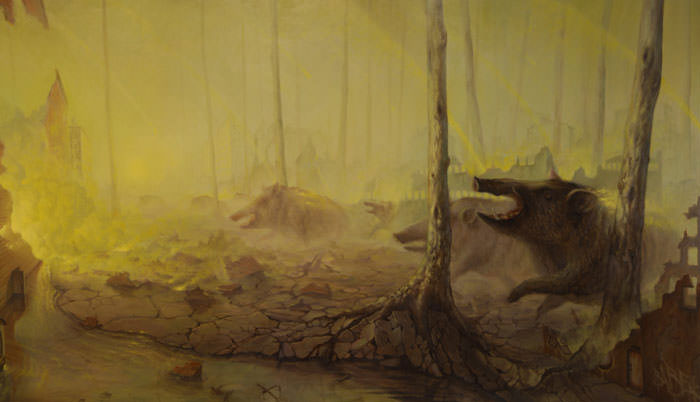 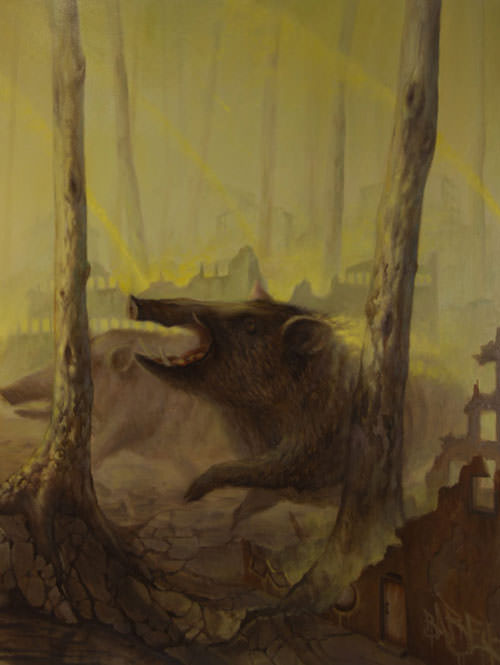 19. “The Great Parade of the Unwashed”, framed.