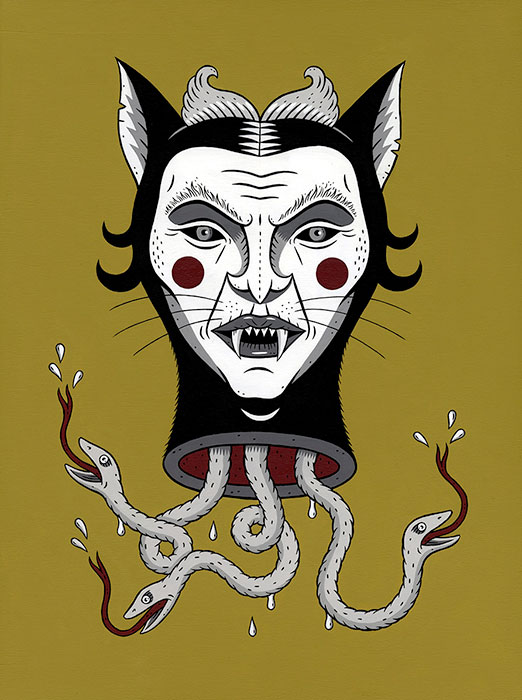 The work of artists Dan Barry and Jon MacNair come together for “Captive Illusions” at Stranger Factory this month. “Together,” the gallery says, “the duo create a show that sends the viewer into surreal and playful worlds with characters that come to life in warm color schemes.” Barry was last featured on HiFructose.com here, and MacNair was most recently mentioned here.

Those who have seen Jon MacNair’s work might be surprised to learn that he is greatly inspired by popular children’s literature, fairytales, and Renaissance art. The Portland based artist is well known for his fantastical, quirky ink drawings, often labeled as “dark”, and we don’t mean his monochromatic palette. “Some of my most distinct memories as a kid were of looking at picture books and being entranced by the images,” he says. “Even though most of these books were for kids, there were some pretty dark undertones in the illustrations that stuck with me.” These eventually led to his current body of work which turns classically ominous imagery on its head.

Portland based artist Jon MacNair (covered here) didn’t actually enjoy sketching at first, but he kept at it and his daily drawings are what influenced his style today. Working mostly in ink, his monochromatic drawings of demons and other creatures derived from animals are decidedly mystical. Some of the themes running through his art’s veins include magic and rituals, man and beast, anxiety, journeys, isolation, night, and communication. Last night at Antler Gallery in Portland, he debuted a new series of drawings and shadowbox pieces, as well as an expansive floor to ceiling mural installation.

Jon MacNair opens windows into cryptic worlds with his monochromatic pen-and-ink drawings. His work has a decidedly vintage, if not medieval, feel. The artist renders elaborate depictions of self-created myths and legends, but rather than being grandiose, the tone of his work is self-aware and humorous. Demons and shamans mug for the viewer while performing rituals and spells. Some of his drawings show gratuitous, cartoon violence akin to that of heavy metal album art and skateboard graphics. MacNair has a solo show opening at Portland’s Antler Gallery this Thursday, August 28, titled “Age of Enigmas.” In addition to his own work, the exhibition will feature MacNair’s collaborations with five other artists he admires: Jennifer Parks, Trudy Creen, Mark Burt, Ian Anderson, and Michael Hsiung.

Both artists with an flare for narrative, Ben Kehoe and Jon MacNair have a two side-by-side solo shows coming up at Portland’s Antler Gallery: MacNair’s “Traversing the Emotional Landscape” and Kehoe’s “Shadows in The Field of Science.” MacNair recently relocated to Portland from Michigan a year and a half ago and has been amid a prolific period ever since. Rendered with India ink, his monochromatic works take the viewer into a haunted, albeit quirky, forest populated by surreal characters. Based in Pittsburgh, PA, Kehoe (brother of artist Andy Kehoe) has returned from a hiatus from the art world with a series of richly-colored and patterned paintings filled with strange mysticism and references to American folklore. Take a look at some of the work in both shows after the jump.

As the name might suggest, Portland’s Antler Gallery showcases many artists whose work deals with the natural world. Their appreciation of animal-inspired art precipitated the annual exhibition, “Brink,” which is now in its third year. Opening on January 29, the group show features artists such as Chie Yoshii, Jon MacNair, Caitlin McCormack, Brin Levinson, Kevin Earl Taylor, and Antler owners Susannah Kelly and Neil Perry, among others. Part of the show’s proceeds will benefit the Audubon Society of Portland, which does work to protect the region’s birds and their habitats.