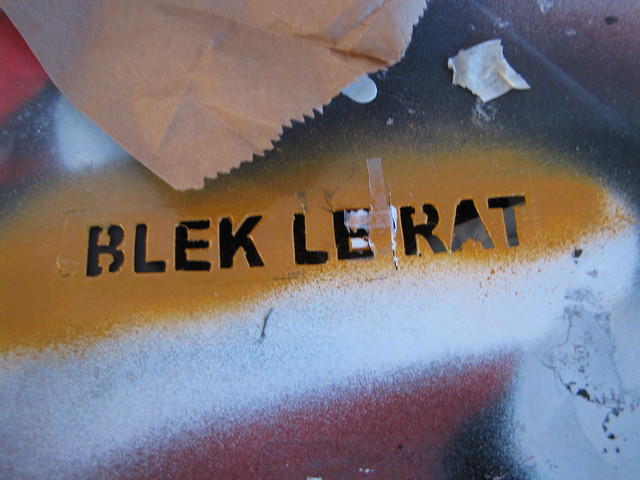 Blek le Rat is, quite frankly, a living legend, so much so that street art historians often list his name as an original catalyst for the contemporary street art movement, and his contributions to the artistic potential of the stencil has had a profound if not unparalleled influence on many of the greatest and most renowned working street artists. The artist’s work has been documented widely, enough so that a new compendium of essays and images is set to release soon via Arts Publishing Ltd. We sat down with the artist for a quick interview before his upcoming book signing at the SFMoMA, which happens this Thursday, November 10th and will be followed by a solo show at 941 Geary on November 19th.

First off Blek, thanks so much for taking the time for this interview. Would you mind introducing yourself to our readers and giving them a little background information on you and your work?

My Name is Blek le rat, I started stenciling small rats in 1981 in Paris (where I still live) after having seen the graffiti in NYC during a trip in 1971. I have always known that the movement we now call urban art was going to be important, I think it is the most important art movement of all times. Constantly renewing itself despite the oppression of the authorities, there is no city in the world without someone leaving its mark in the urban landscape. 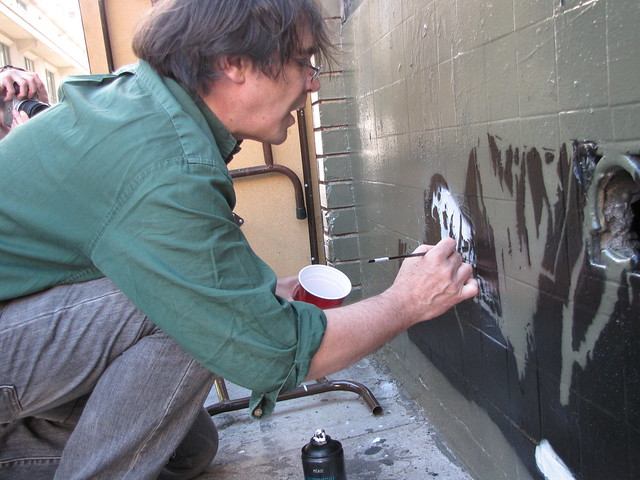 What’s a day in the life of Blek like? Do you have a daily routine?

yes, my life has become quite routine since the birth of my son in 1993 in a sharp contrast to my life before. I have learned to balance. The word “routine “sounds quite boring(especially regarding creativity) but it is actually pleasant, positive and productive. Without routine and discipline you create episodically whereas a “balanced” daily life keeps you on track (if you know what I mean). In the morning we discuss projects and business (people who haven’t paid for example) and in the afternoon I work approximately from 1 to 7 o’clock. I hardly ever attend openings, never go to night clubs (I hate that), we rather go to the pictures or restaurant. I do have a very normal life. 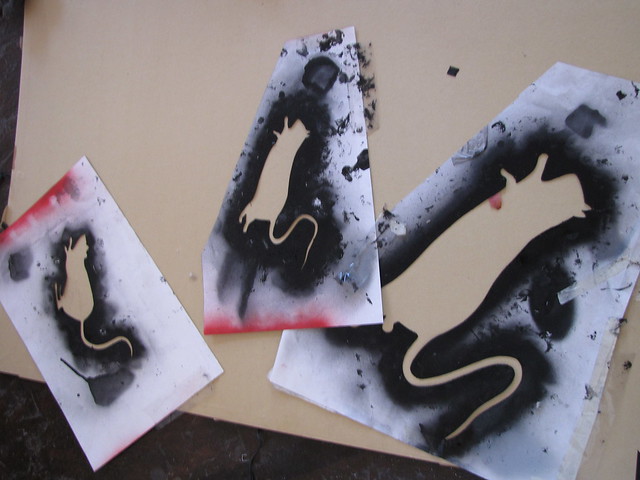 30 years ago you began your notable career as a street artist. Can you tell us a little bit about the first piece you ever put up? What image was it and where?

I did rats in Paris. The first were running along the streets in the fourteenth arrondissement and around Montmartre where I lived. I used to walk around Paris at night with my stencil and a couple of black spray cans. It was my main activity. I didn’t want to be like my many friends who spent their days smoking and talking without acting. So the little rats made me feel better. I choose rats because there are so many of them in Paris, everywhere in the tunnels of the Metro, I didn’t want to paint flowers. I have often been asked “Why Rats???”, people didn’t get the message at all. Apart from the fact that they are clever and nobody likes them, they also embody the very meaning of graffiti and will survive the apocalypse, like urban artists, after all “Rat” is also the anagram of ART. 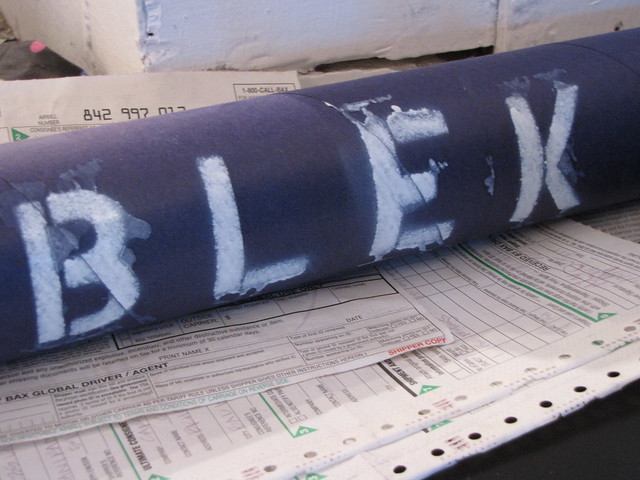 Over the course of the last three decades you’ve traveled the world quite extensively. Do you have a favorite country or city to put work up in? Why?

I like it everywhere but Paris. I know Paris to feel the “kick”. Leaving an image in the streets has to be an adventure, even if it is done legally. Are there any locations you haven’t visited yet that you would like to?I have never been to China, I would love to work there! My dream would be to travel the world by car for a year to leave my mark everywhere not necessarily in the cities but also in the middle of nowhere. I think I am going to do this some time soon. You’ve been referred to as the ‘godfather of street art’ and have been a major inspiration to most working street artists today. 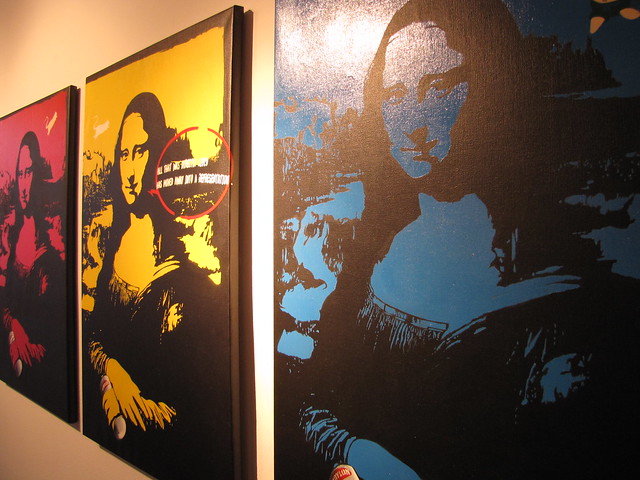 Are there any emerging street artists who’s work you’re fond of? Why?

I like the work of the German artist “Mein lieber Prost”, I think it’s funny and well thought. 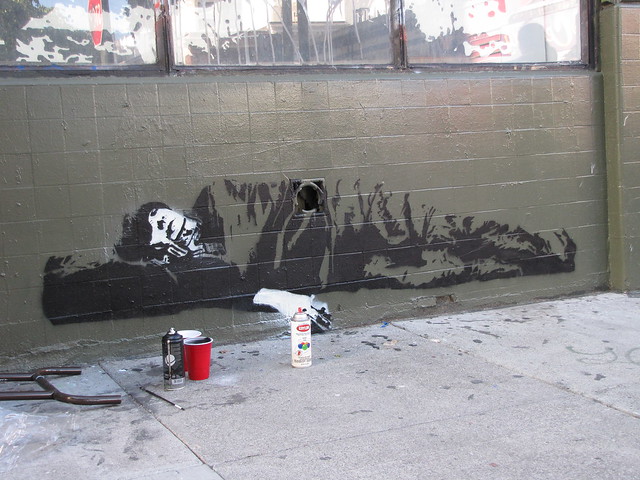 What role does a work’s location play into your process? Do you find a location and then make a piece, is it the other way around, or both?

The location is very important but it is most of the time a coincidence, that is the aspect I like about Street Art, the adventure I earlier referred to, you never really know how it works. Sometimes I paste or stencil something without being aware of the environment (in a city I don’t know) and then the next day I come by and discover a surprising interaction of image and space. The location is an essential player in Street art and makes this art so rich. The same image put in different places will never have the same message. 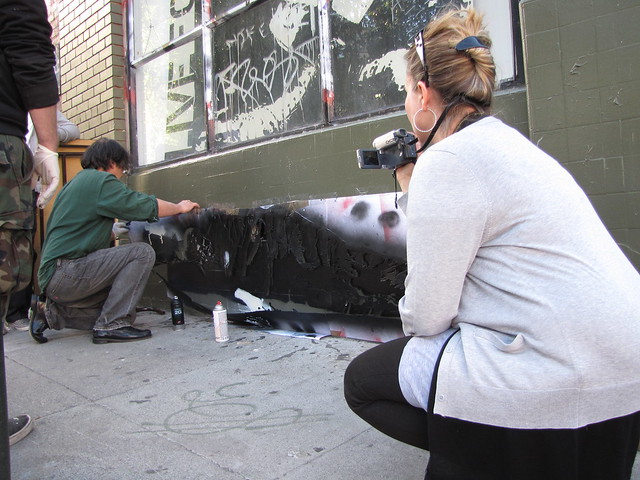 Your wife Sybill Prou is directly involved in your work, most often as a photographer and documentarian of your pieces. What’s it like working with your significant other? Does she inspire you, do you inspire her, and how?

We have been talking for twenty years. It is very important not to be alone. It has been proved throughout art history that creative painters have someone to trust. I think it is just perfect. Artist groups composed of male painters don’t work, they split after a couple of years. 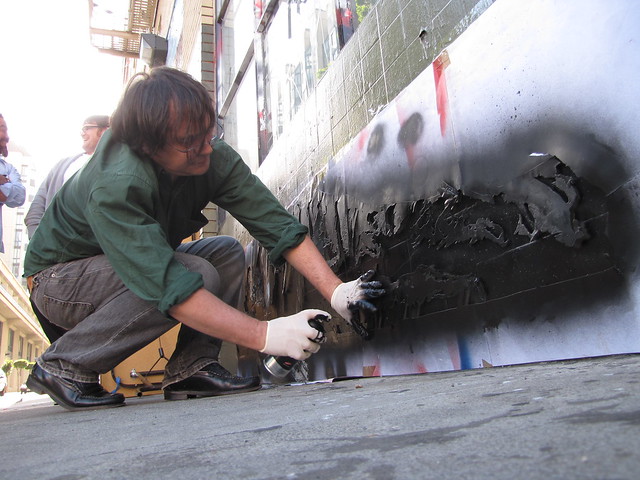 With hundreds, if not thousands, of pieces created and installed over the course of your career, do any particular works stand out for you as a favorite?

Not really I do like them all. The most recent piece is always the best one, but I don’t regret everything. The only thing I regret that I was stupid enough to get caught by the cops :( 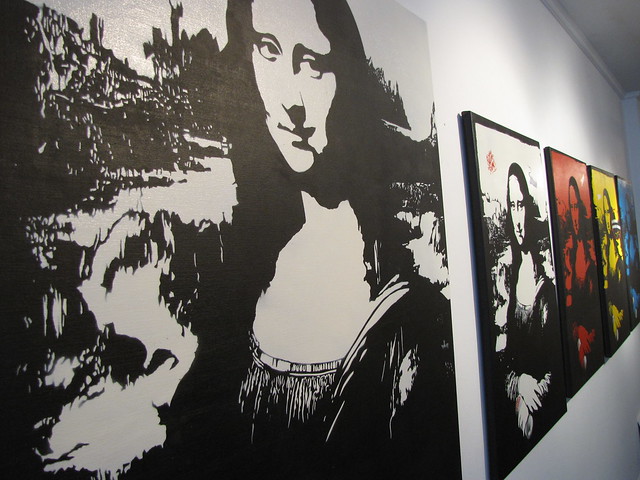 With thirty years behind you now, what’s next on the horizon for you? Where would you like to see yourself in thirty years from now?

I think in thirty years from now I’ll be dead! Like I said I would like to travel and paint everywhere. I hope I’ll be able to do this. 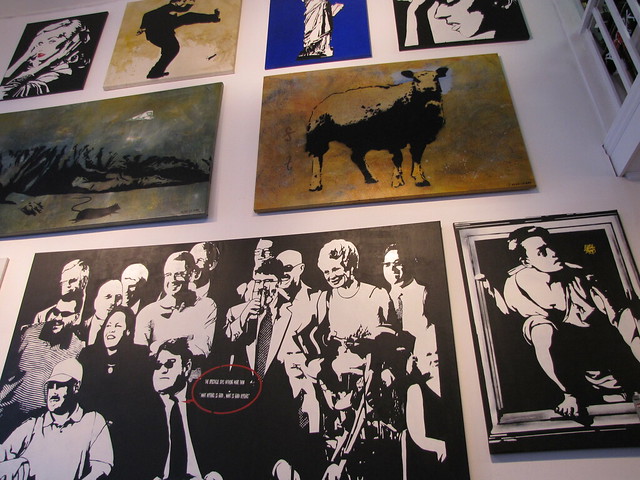 Finally, any words of inspiration or advice for the new generation of street artists?

Find your own path, don’t try to redo what has been done!