Near a lonely silo in Windom,Minnesota, the massive, scale-covered tail of a rare bird whips around adecaying fencepost. Its claws grip the wood as it stretches toward the moon,holding a newfound treasure up to the light. Peering out from beneath its fish-shaped,metal helmet, the beast twists the object around in its elongated beak toexamine it from all angles. A skeleton dangles there. The bent remains of acreature perhaps a tenth of its captor’s size. The bird pauses, as if ponderingwhat to do with it. But it is soon startled from this dilemma as a flock ofmanta rays takes flight behind the hill, soaring up past the clouds toward thestars. The bird lets out a deep croak from its frog-like throat and, satisfiedwith the night’s find, flaps its massive wings, departing into the dark.

Aaron Horkey’s artwork is often acombination of both beautiful and nightmarish imagery – filled with hauntinglystrange creatures that emanate from within his imagination out into the naturalsurroundings of his hometown in rural Minnesota. There, at Windom’s RemickGallery, Horkey recently unveiled an exhibit containing an astounding 84 piecesof artwork he’s created over the last seven years. Of those, 33 were hisoriginal ink drawings, which hung nearby their finished counterparts. Thisallowed the crowd to catch a rare glimpse of Horkey’s work before any colors,lettering, or other modifications were made to create the finished posters.

Along with his previous work, a brandnew print entitled “Midwestern Heart” was also available. The person whoguessed closest to the number of stars in the print’s vast sky without goingover the actual number walked home with a free $800 print. I got theopportunity to ask Aaron a few questions about that show and get a step-by-steplook at how he creates one of his posters.

Firstoff, how many stars were on that “Midwestern Heart” print? My guesswas 2,500, but I never heard what the actual amount was.

The final tally was 4,340 which is substantiallyhigher than I would have ever guessed. Even though it took about 8 hours todraw them, I assumed there would only be a thousand or so. Credit for theofficial count goes to my long-suffering wife, kIM. She figured out a system soas to not lose her place while counting and knocked it out between ferryingkids to soccer practice and whipping up some incredible vegan blueberry/peachcobbler. 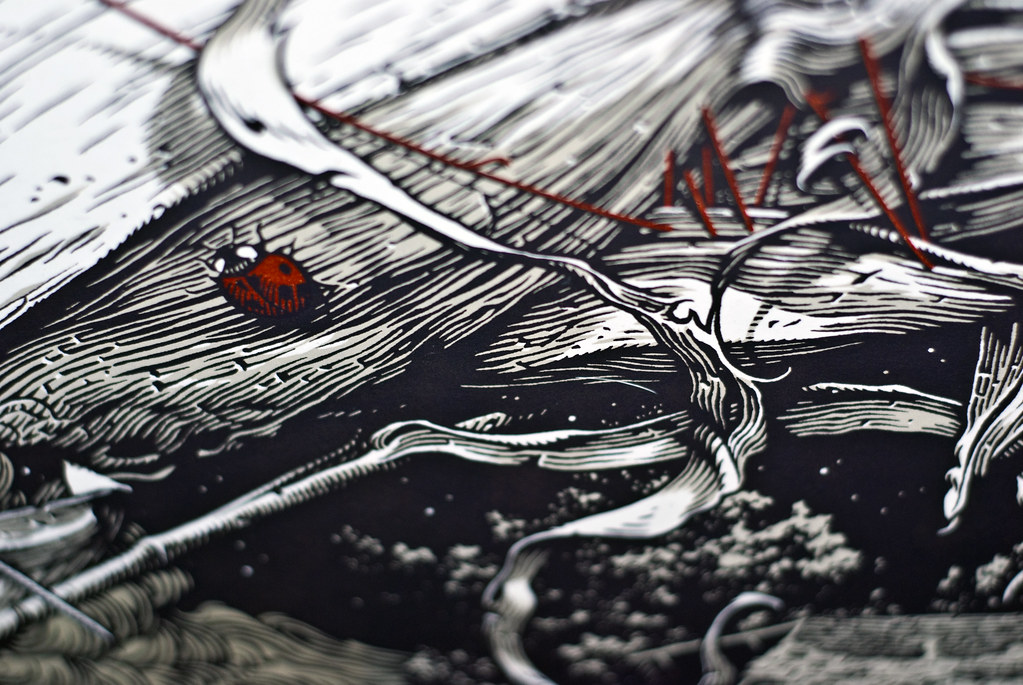 Canyou tell us a bit about the idea behind that print and the show?

The main idea behind making the printwas to have something available for folks to pick up as a memento of theexhibit since nothing in the show itself was for sale. I tried to come up withimagery that wasn’t too obviously Midwestern while still referencing the area(although, admittedly, a huge ear of corn is just about as obvious as itcomes). Ladybird beetles are ubiquitous here, especially in the summer months,and the clear, star-filled sky is a definite hallmark of the rural midwesternexperience. The dilapidated barn in the background was found on a gravel roadoutside of Mason City, Iowa and has long since returned to the soil. I’vecarried those reference photos around with me for almost a decade, wasn’t untilthis project that I found the right spot for her. As for the show, I mostlyjust wanted to gather a few things together that I wasn’t terribly embarrassedby and present them in their native environment. Most all of my referencematerial and inspiration for the work in the show was culled from thesurrounding wilds of rural Cottonwood County and a majority of that from withina 10 mile radius of the gallery/museum. The Remick Gallery was the venue for myfirst solo exhibit which took place in the summer of 2003 and I wanted topresent a good cross-section of my output from the seven following years. Adecent amount of stuff didn’t make the cut but the space filled up fairly wellregardless, definitely the highest number of pieces I’ve had in a single show.

Therewere rumors floating around the Internet that this would be your final show,but from what I gathered, you’ve got another one coming up late next year. Canyou tell us more about that?

“Midwestern Heart” will be my last soloshow for quite a while, if not for good. If I did another solo show I’d want toexhibit a series of all new paintings and drawings which would take many yearsto compile as well as finding the right space to present them. Really can’t seeit happening what with the commercial work and parental duties absorbing most ofmy waking hours but the idea of a new painting show is always there, nagging atthe back of my head. Never say never, I suppose. The show next year would bea group show in San Francisco, California but I’m not 100% sure it’s happeningso I can’t divulge anything beyond that.

Theoldest of your work at the show was a group of skateboard designs from 2004.What led you to begin working on skateboards and how did that lead to your workas a poster artist (if, in fact, it did)?

They are, for the most part,unrelated – just two avenues I always aspired to have my drawings applied to. Istarted skateboarding around 1992-1993 and have been obsessed ever since. Beingland-locked in that era the thought never crossed my mind that I’d ever be ableto contribute to the visual history of skateboarding. Then, around the turn ofthe century, my good friend Todd Bratrud began making headway within “theindustry” and wound up eventually becoming art director at a company whichessentially gave him free reign and he, in turn, let me know the door was openfor submissions. Being called on to send in graphics was the mostexciting/daunting thing I’d experienced up to that point. I’ll never forgetopening the first box of boards I’d designed. Lackluster though they were, itwas an absolute stoke. The opportunity to work on posters came a few yearslater and when those started catching on and finding an audience I reallyslowed down with the skateboard graphics. I’d love to get back into it but I’vevowed to never have my stuff applied to a skateboard via heat transfer everagain – screenprinting only from here on out. Unfortunately almost nobodyshares my sentiment as screened graphics are more expensive, time-consuming anddifficult to produce and as such are only practiced by a small number ofindividuals in this day and age. Another dying art I’m not prepared to let goof just yet. 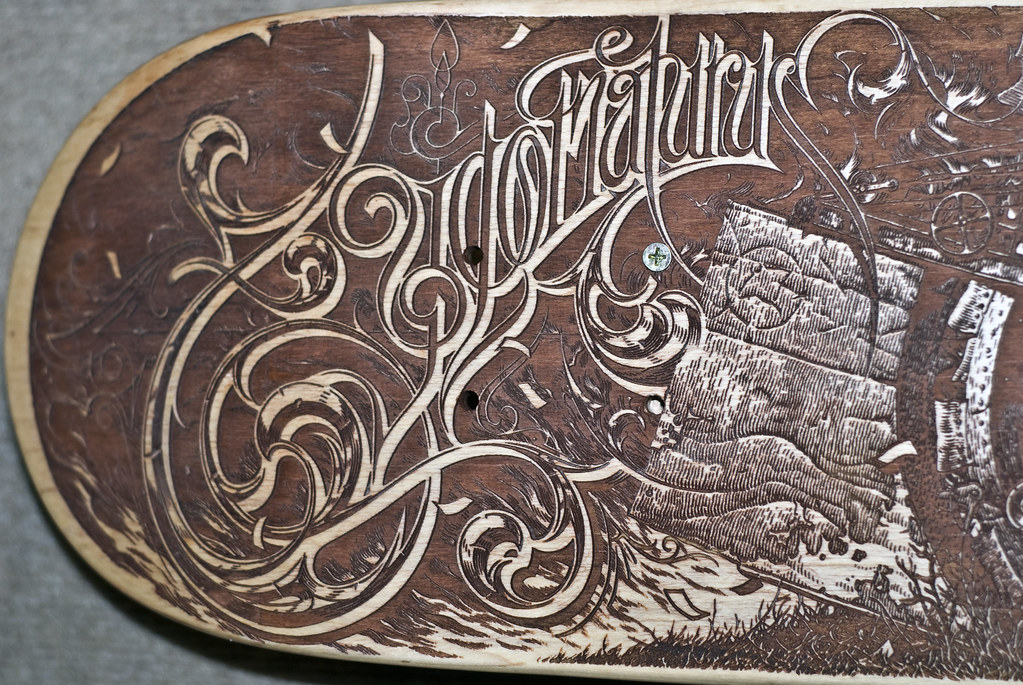 Whenyou put together a show like this and look back through all your previous art,in what ways do you observe your work evolving since you began?

I’d like to think I’ve started tofigure out how to draw although it’s painfully obvious I have many more milesto go before I’m able to pull-off a successful picture. The lettering on a lotof those early prints is just clunky and awkward – I was still measuring widthsbetween letters and going to great lengths to make sure drop shadows wereuniform, etc. Once I started to loosen up a bit the lettering became lessstilted and more interesting, to me at least. As for the evolution of thescreenprints, once I had a few under my belt I started to better understand howthe inks interacted with each other and what elements could be omitted from themain drawing and added onto other layers. Discovering transparent black/greywas a huge step toward somewhat believable dimensionality with shadows andsuch, to the point of being sometimes ridiculous and often times spending dayson shadow layers barely visible in the final printed product. You can reallysee the evolutionary leap, for better or worse, if you compare the three AndrewBird posters in the show. I grouped all three together on the wall and therewere 3 years separating each print starting with 2003, 2006 and ending in 2009.To my eyes the most recent is the most successful but the 2003 Bird still standsas the favorite for most of my collectors. I’d like to believe it’s becauseit’s the hardest to come by, as it’s not a particularly strong piece, but Ireally can’t tell anymore.

Igot to talk to your parents quite a bit at the show. They told me that you werepretty self-motivated from an early age and that you mostly trained yourself asan artist. Yet even in some of your oldest work, your designs have beenmarkedly intricate – requiring a very close look to notice everything you’vepacked into each corner. How did you go about developing your highly-detailedstyle when you were younger?

As long as I can recall I’ve tried tomake every square centimeter of surface area count. The entirety of my 6thgrade social studies note-taking was crammed onto one college ruled notebookpage, much to the chagrin of my teacher at the time. I’ve always been drawn toexcessive detail – my favorite books when I was a kid were of the sort whereone could get lost in each page for hours. “Who Needs Donuts?” byMark Alan Stamaty is a perfect example. Once I got more immersed in comics itwas a similar thing – Rand Holmes, Serpieri, Hewlett, Crumb, Ware, Cooper,Kerri – all my favorites really know how to fill a panel/page. That’s the sortof work I react to and that I’ve always aspired to make, horror vacui forever. 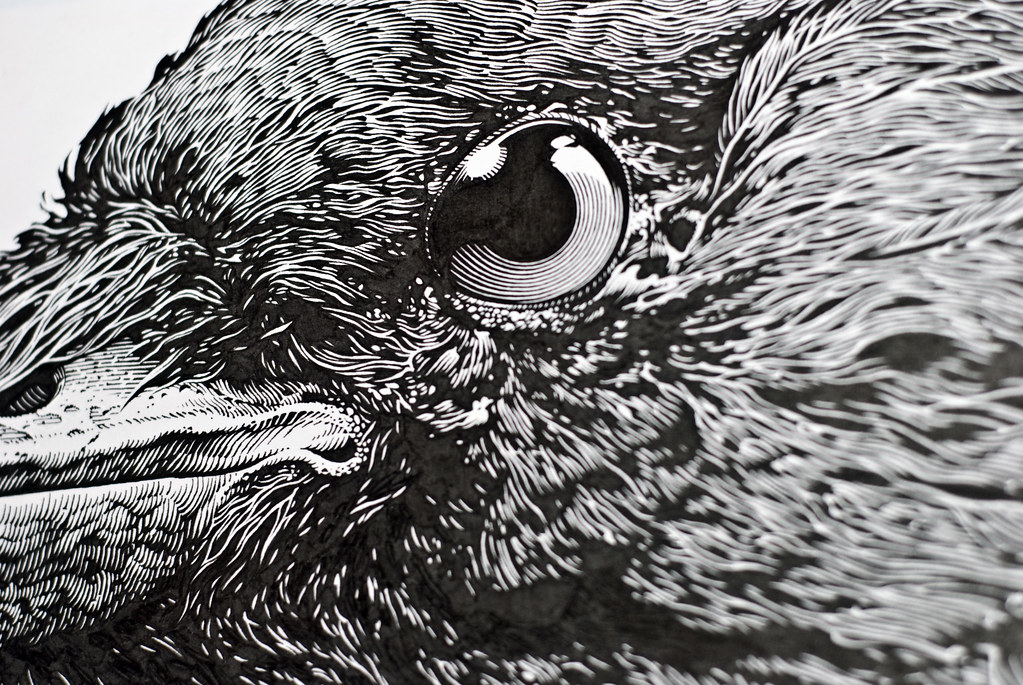 Mantarays and helmeted birds have been frequent characters in your work through theyears, often found perched atop decaying machines or flying across rurallandscapes. What sorts of things inspire these recurring visuals?

The rays, manta and otherwise, arethere for their inherent symmetry, the birds are dogged survivors. Each has arole within a greater narrative, which each faction is slowly evolving within.I have a loose idea of where these animals are headed but I’m trying to letthem find their own route for the time being. 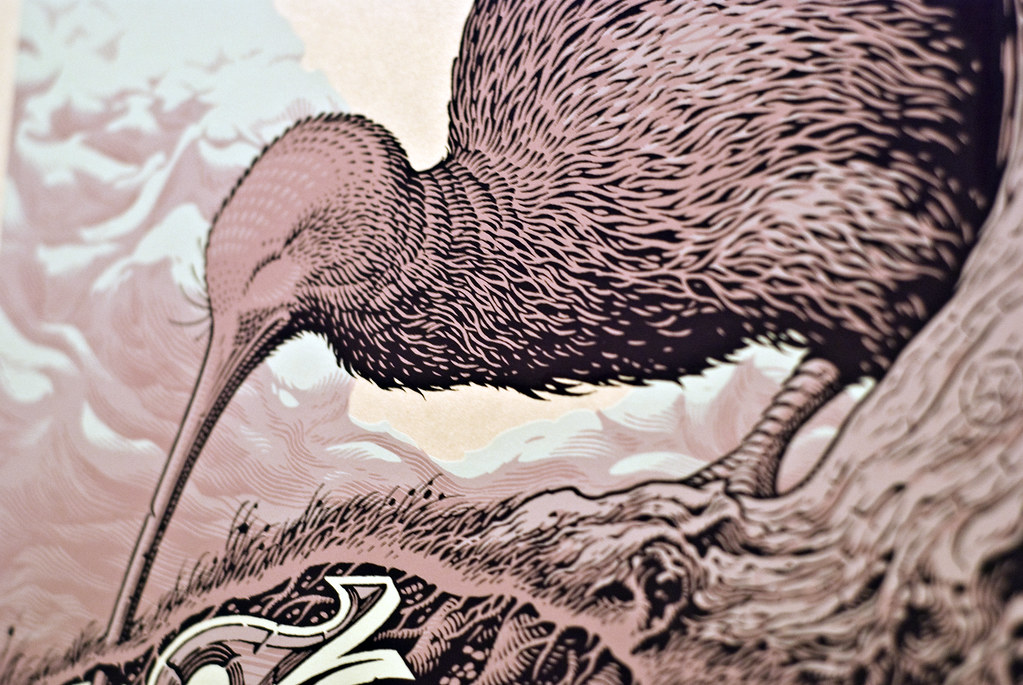 Click here to read part two of our interview with Aaron Horkey and read a detailed walk through about the making of the Genghis Tron poster!

Check out the Shrieking Tree Blog for high resolution photos from the show!