“I was watching the Iraq war on CNN while eating my dinner. I chewed contentedly as peoples’ homes and limbs were being blown apart. There was a commercial break about washing powder and cars, then I was transported back to the bombing, the screaming women, the blood. The whole scenario suddenly struck me as obscene. How is this possible? I am comfortably eating a meal in my own home while watching horrible suffering. This is “normal” TV viewing. I am not even being put off my food,” reads the first half of Laurie Lipton’s statement introducing her upcoming solo show, Weapons of Mass Delusion presented by Corpo Gallery at Grand Central Art Center. 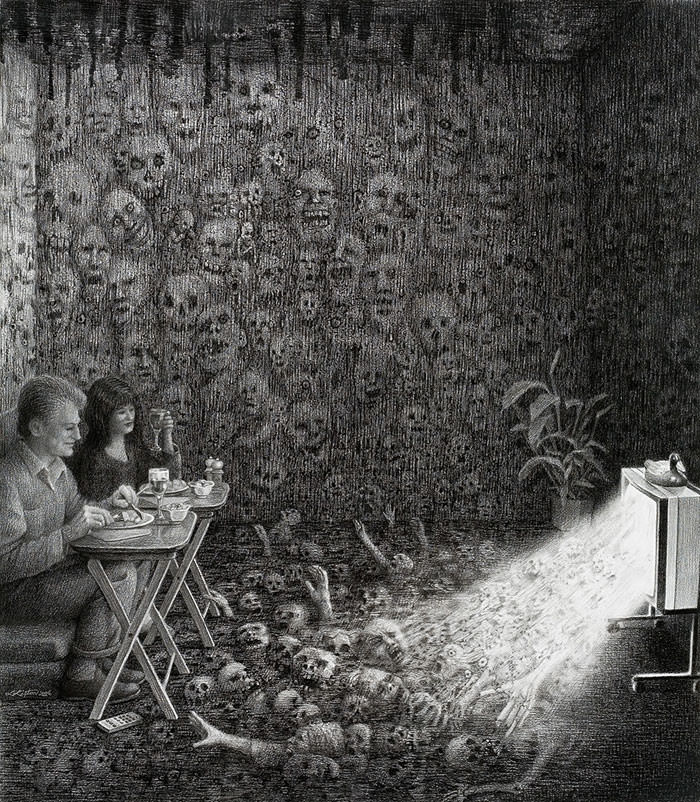 Oscillating from a bloodbath to the fantastic products one could use to tidy up afterwards and back again within a matter of minutes reflects how indifferent people have become. In World War I, the term “shell-shock” was coined to describe soldiers with such symptoms as the slowing of reactions, preoccupation with minor issues and familiar tasks, a lack of concern, and a loss of initiative. The human mind buckles after being inundated with trauma. Combat does not stop while a 50s housewife glides in, blowing soap bubbles. Shell-shock’s symptoms, which all which hint at an apathy of sorts, seem to be expected, even REQUIRED from television audiences.

As she so rightly observed, not only should we not be able to eat watching such atrocities, but surely finding the crunching of our dinner more worthy of our attention. Apathy is rarely cited as an inspiration, but Lipton’s carefully considered themes reveal her own complex analytical approach while stirring similar cognition in others. War, credulity, consumerism, and TV are the other pivotal triggers to Lipton’s commentary on the media-panacea’s cultivation of nefarious feelings like fear, and greed. Despite the surrealist qualities, Lipton cites very real experiences as informing the work. Cognitive dissonance as a result of her dark musings while still ensconced in the pageantry of childhood is motivated Lipton to start drawing as a four year old. Many photo realists deliberately rely on such a pragmatism to underscore the subject’s absurdity. Not Lipton.  Thus a show about treating the very real war as such is harmonious with her consistent authenticity.

Not to mention her visual consistency. Lipton’s dreamlike otherworldly-ness is often scaffolded around stark lines and cold, almost practical structures. A vast collection of monochromatic work sounds like it would become monotonous or bland. Intricate details that amaze the eye would become loud and busy otherwise. MC Esher’s refined architectural (perhaps after a large does of Oestrogen to account for the feminine embellishments) came to mind immediately. Lipton’s work is infused with femininity, even when industrial and architectural lines stand out most.

The 17th Century Flemish Masters provided standard of tonality and detail so exquisite , even talented painters cannot match it with paint. Lipton can, and amazingly it’s all with a pencil (and occasional charcoal). 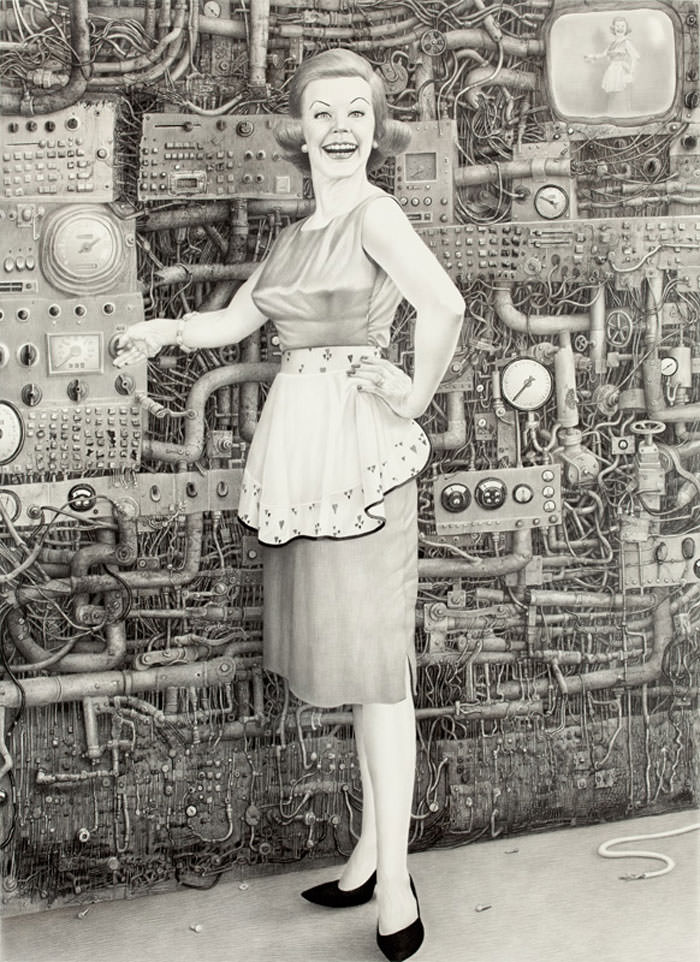 Cross hatching with such fastidiousness that, as the layers accrue, they convey tonality and detail that she sought to replicate was not part of her curriculum. Her dogged determination and refusal to give up perfecting her technique was seen as rigid and discouraged by her professors.

Despite her own disappointments with art academia, Lipton’s show is at Grand Central Gallery, at Cal State Fullerton’s Artist-in-Residence Program From April 22 through to June 5, Lipton will reside in the art center with the visual arts students who already live there. During her stay she will be working on a limited. Lipton’s unfavourable experience did not manage to discourage her from participating in any art instruction as it would have with many people.

This willingness to take occasional and worthwhile risks has help keep her career constantly moving. By volunteering her own candid anecdotes and personal connection to her work, the realism in Lipton’s paintings is enhanced. Self-disclosing without overexposing oneself is essential.

Pontificating about the war in Iraq is a guaranteed way to deter people from one’s message. War is hard to discuss diplomatically (especially when it’s still in full swing) but Weapons of Mass Delusion deals with the uncomfortable situation of discussing “The” war, yet does so in a cautious, respectful manner. The vocabulary she depicts the horrors of war, bombs exploding, limbs flying etc, and the “obscene nature suggest more graphic scenes than office furniture, shopping mall windows, celebrity read carpets. These scenes represent all of the vacuous pastimes that have eclipsed the grim path of the conflict.

Clearly, Lipton has a cross cultural appeal. In London, the fashion crowd all scrambled to All Saints (an edgier, more urban franchise) in order to buy her line of t-shirts. Jon Beinart artist, art patron, and the virtuoso behind the BeinArt Surreal Art Collective in Australia is featuring Lipton in his upcoming Metamorphosis show in Copro Nason on May 1st and the accompanying book, Metamorphosis 2. Not to mention the WMD show is accompanied by an eponymous book. Her list of past exhibitions seems to cover most of the European Union. However, I suspect people will immediately think of the United States when viewing the he 50s kitsch coupled with the undercurrent of couch-potato domination hints at Retro Americana. After all both Iraq and the television are “attributed” to the United States (read: blamed on).

As of February 28 2010, there were 98,000 American soldiers still stationed in Iraq. The American media broke the news of the first air strike to the troops in Iraq before the army did!

Yet Lipton refrains from making this the “doing” or “responsibility” of any specific country. She is originally a New Yorker who currently lives in London, after residing in a panoply of Continental European cities. Her technique was inspired by the Flemish painters, but easily morphs to look Victorian one minute and Mexican the next. War and media are highly politicized topics, but somehow LIpton managed to render an entire show about the combination of these two topics and avoids making any political statements. This, to me, is more magical than “painting with a pencil.” 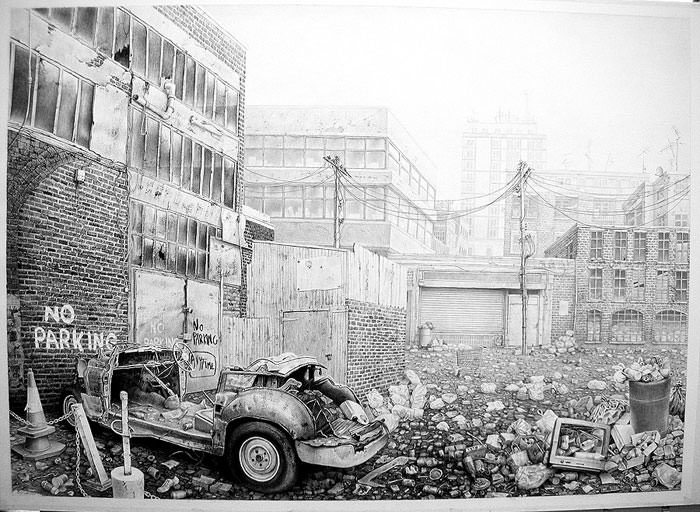 The sworn antipaths, and other blindly dogmatic sorts may be stirred into action after seeing the exhibit. Raising the collective conscience by identify what drains human empathy, rather than shaming those who have become inert is a likely outcome of Lipton’s. Art that can transcend ages, continents, and even nationality then it surely has power to revive the spirit even the most collaterally damaged of the 21st century’s shell shocked. I suspect that there is even hope for the most languid species of all: The furniture legumes. 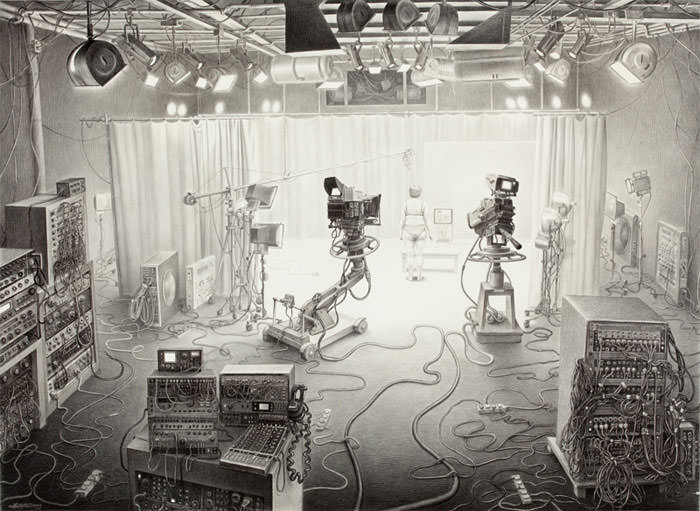 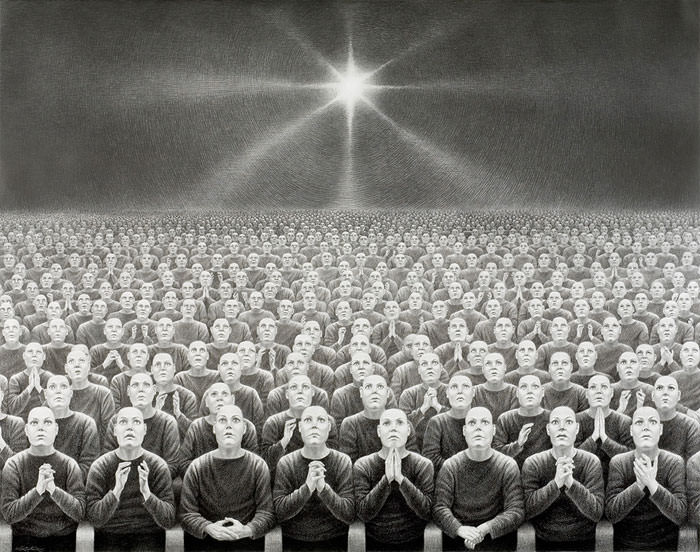 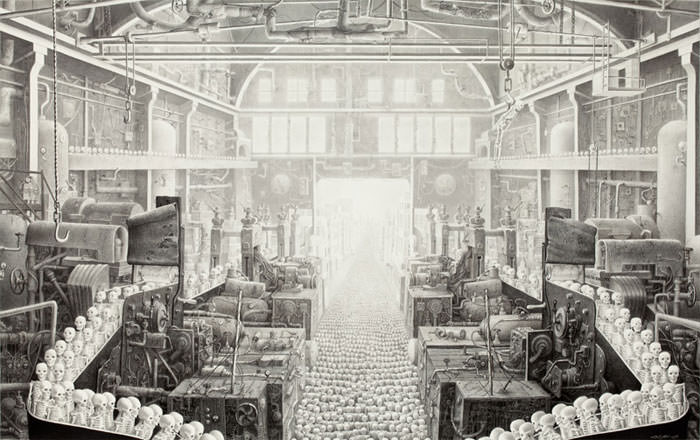 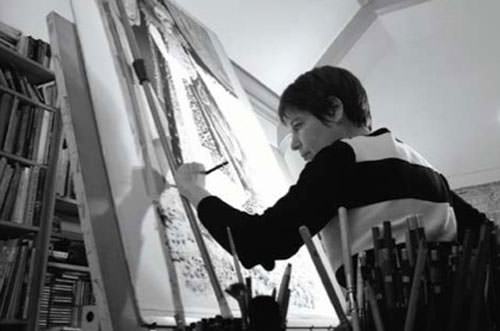