Nathan Spoor brings us an exclusive and personal view into Nicola Verlato’s (v.11) latest work for the centerpiece occasion of this year’s Bienalle. The 53rd International Art Exhibition, known far and wide as the heralded Venice Bienalle, features a select group of prominent contemporary artists that represent the best of the best in their respective dedications. This year, the Italian Pavilion has been enlarged to over double its previous size. Join us as Verlato gives us the grand debut of his latest site-specific work for the big show. 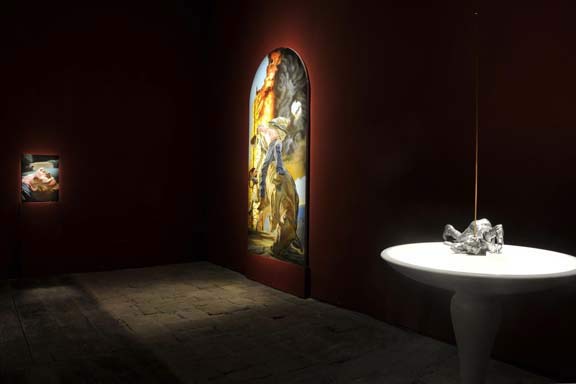 I Being that this is all new material for the Bienalle, what was the creative impetus for you in approaching this situation?

The ideas for this body of work started more than one year ago, beginning with what would become the “Beauty of Failure” paintings. I wanted to do something with an oil well as a focal point. The more I went over the idea in my mind, I couldn’t help noticing that the piece needed to have something else happening. This was the moment when the idea arrived, that is, the guy falling from the bull that is collapsing on the ground. It created a situation that was something tragic and “cosmic”. I started the painting but it remained unfinished for more than six months.

When the economical crisis occurred in September / October of the last year, all my friends started to recognize and connect the dots that that was the subject matter of that painting. So at that point I realized that it was the time to finish it. Then I received the invitation for the Biennale! For so long I have had the desire to try to create a kind of a church chapel, with paintings and sculpture in an architectural space. I realized that my idea cold become a reality, and that this was the perfect situation. It was officially time to finish the painting.

When I began working, the head of the guy on the bull became James Dean, (I was already working on a 3D digital model of his head). Yet more specifically, it became James Dean in “Giant”, Dean’s career defining role (released after his untimely death at 24, and posthumously winning him the Academy Award for Best Actor). With these new developments, all the other works in the exhibition came about as the consequence of that first painting.

What has the experience of being involved in such a grand exhibition been like for you?

It’s extremely important for me. It’s a great opportunity to make something more than what I usually do. Now I have the ability to prepare an exhibition of bigger paintings, with a more articulate use of the interactions of different medias. It is an exciting challenge to merge the art forms of sculpture, painting and architecture. And also, because of the enormous exposure, it’s also a way for my particular form of art to be present in such a grand and international show. I assure you that my work is the only one of his kind at the Bienalle! 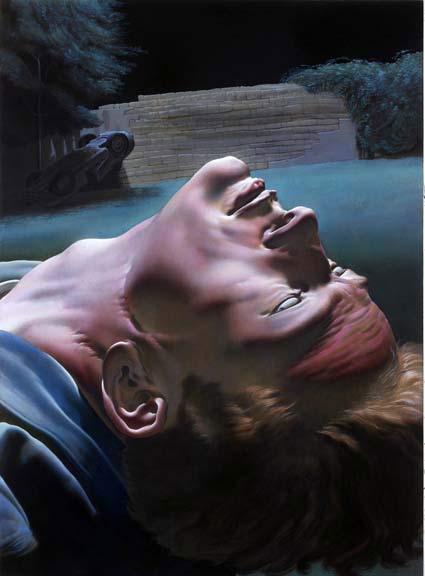 Was the idea of incorporating a sculptural element inherent to this body of work?

In the beginning I wanted to make just a big sculpture of a life-size figure to be displayed on the floor. But the curators felt that the space I had would restrict its viewability. I thought, no problem, I can find the solution for that problem, mostly the pedestal. The solution is something very common in Catholic churches in Italy: a holy water basin that is usually situated in the entrance of the church. It’s not visible in the pictures, but in the installation you can see that the basin is filled with black oil paint instead of water (so that it resemble petroleum). This adds another layer of meaning to the whole situation. 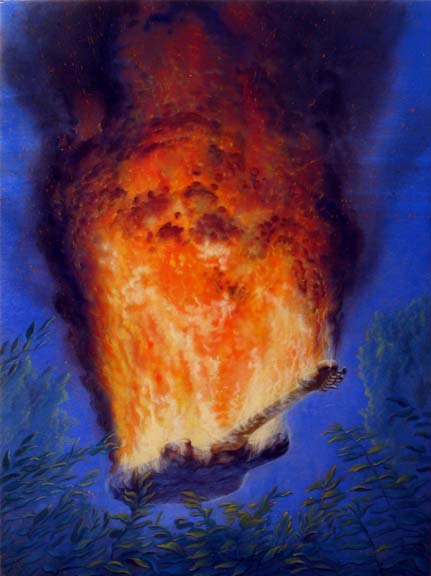 Would you care to share your experiences and photos of this amazing situation with us after your adventure?

Absolutely and thank you! Let the readers know that we shall catch up after the gala event and openings! 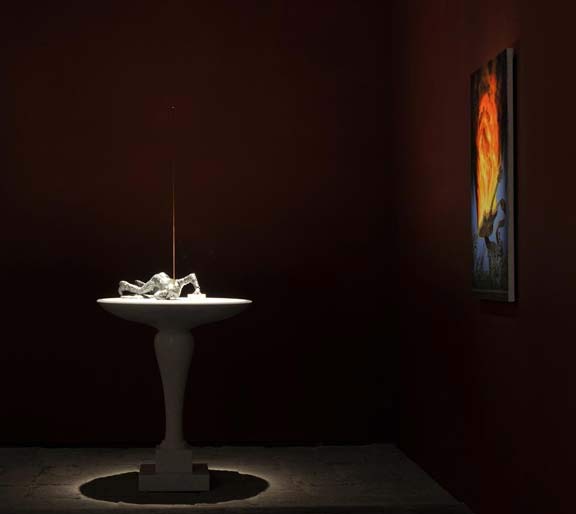 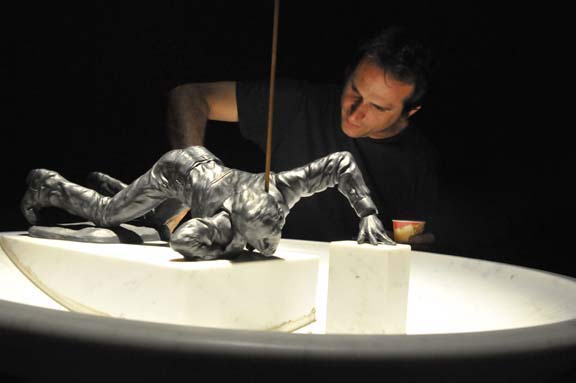 “The Gift”, cast resin, steel and carrara marble, 2009
(Verlato tends to the installation of the sculpture) 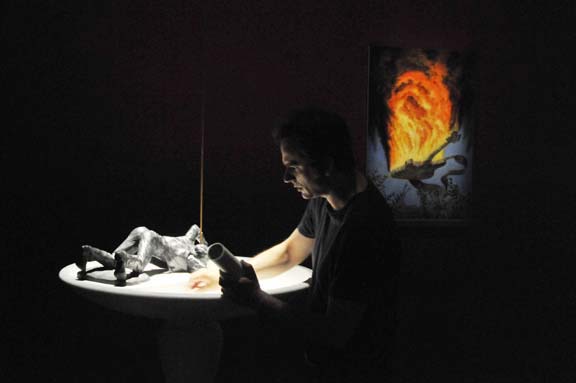 “The Gift”, with artist at installation time

The exhibition of Verlato’s works will last until the November 22, 2009.Go here for more information. There are also many amazing works on his website, including the new paintingshereand his feature in Hi-Fructose vol.11.