Southern California artists Matthew Bone and Brian Viveros‘ show “Southern” opens this Saturday night, May 9th at Last Rites Gallery in New York. Both artists will be in attendance. There will also be a screening of the movie by Brian Viveros and Eriijk Ressler “Southern” from which the show was named. After months of being chained to the easel and finally shipping his work, Matthew Bone was able to take a minute to chat before literally running out the door to leave for New York.

Matthew’s work is provocative and challenging especially when he paints in generous scale. By combining the mass appeal of sex and horror, he gives the insincere pop culture hype machine a good 360 snap of the neck by throwing it right back as a “re-envisioned modern mythology.” 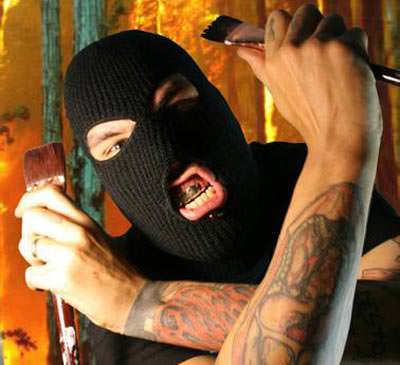 I first met Matthew 2 years ago at the Fusion Five Festival in Cannes. In spectacles, full sleeve tattoos, black spiky hair and 14 karat grill gleaming through a wide smile, the six foot tall artist presents an intimidating countenance, until that is, he says “hello.” Your grandmother’s would want to take him home for cookies.

Do you like to go by Matt or Matthew?

Oh, I prefer Matthew by far, although no one except my wife calls me by it.

How many paintings of yours are in this show? 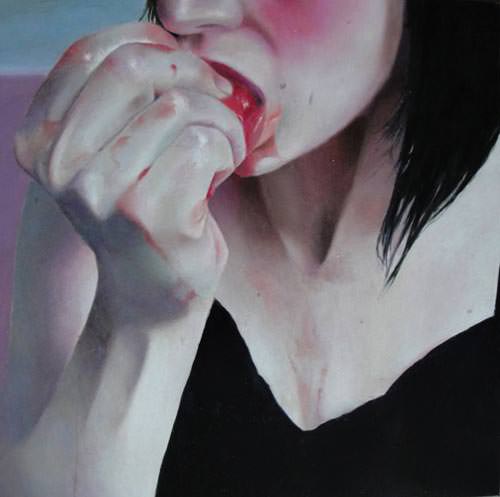 I have 12 pieces in the show, and one collaborative piece with Brian Viveros.

The film “Southern” that Brian did with Eriijk Ressler will be screened at the opening. The show is also named after the film? How did you and Brian come together on this project?

Brian and I had been showing off and on together for the past 4 years or so, and we had just really hit it off immedietly. Since day one we’d always talked about showing together, and with our work having a very similar subject matter and feel to it, it just seemed like a natural fit. He and I had both been talking to Genivieve over at Last Rites about planning shows seperately, and it just came together and very organically grew from there.  I actually had mentioned using the title of his movie “Southern”, and Brian was immediatly into it; when he first told me about the film, the name just sort of resonated with me as such an amazingly ambiguos word that conjures up ideas of damnation, sex, and the deep sea. I was immediately smitten with it.

Why did you start painting?

The outlet of creativity through painting and drawing was always just something that came naturally to me… I don’t remember not doing it; the flip side to that is that because it did feel so natural to me, I never really took it seriously nor applied myself until much later. 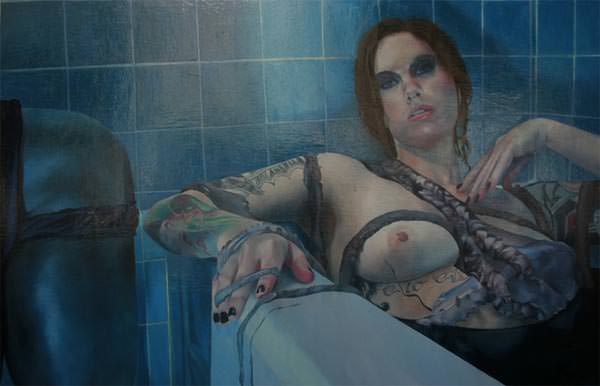 Logistically I’m curious how you and Brian were able to complete the collaborative piece you did for the show? 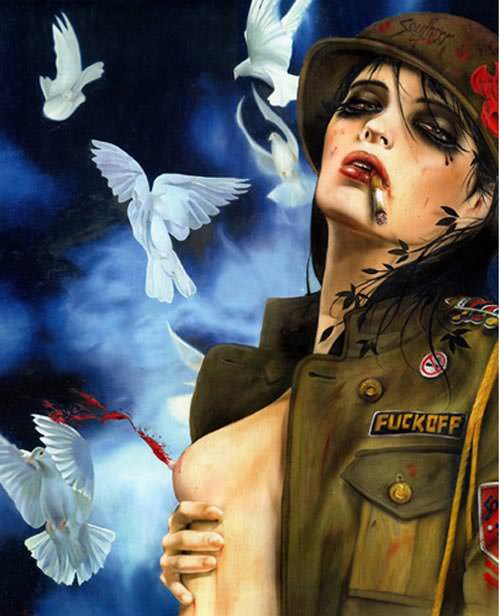 We’re doing a print run which just finished for the show. Bryan lives in Riverside and I live in Pasadena, so it wasn’t that difficult; Brian started the piece… there was really no communication about the final idea, I sort of composed my part of the piece in reaction to his.

Who are your models, where do you find them? 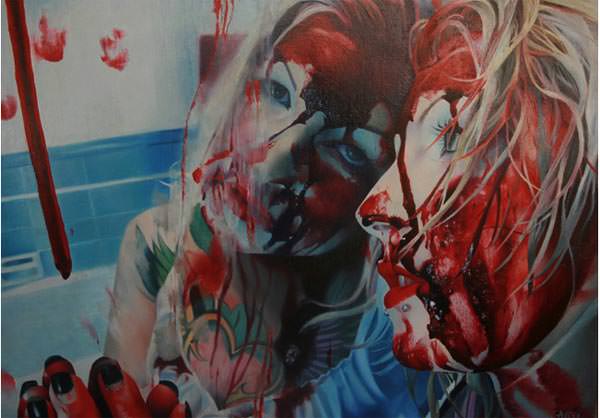 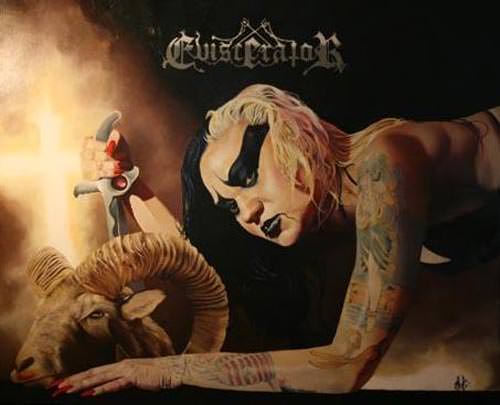 I have certain girls that I use over and over again; and in addition did the whole Myspace thing in trying to find new models, but it’s difficult to judge how someone will work through such a narrow pinhole view. How a girl carries and projects herself is more important than how they appear, and in the end that’s what I hope to capture. I usually know it the moment I see it.

Are you still a fan of comics and horror movies? If you are, do you prefer the blood and gore kind of scare to the mental/psychological scare? 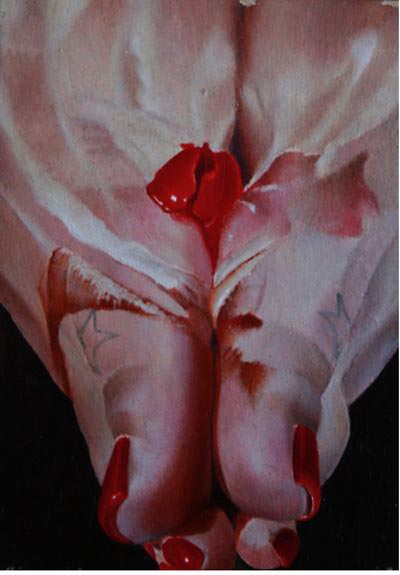 I am still a huge fan of horror movies, but the newer ones tend to bore me to tears. There are a few exceptions, this French movie Inside has really been a recent inspiration, I can watch it over and over again, and it’s just so beautifully and grotesquely over the top. I’m still a fan of the classics. Comics are like my first true love, they will always have a huge place in my heart, they’re just not involved in my life anymore.

The scale of your paintings adds such an impact to the color and subject matter. They are definitely not shy. Is the scale part of the intended experience for the viewer or is it just because it happens naturally that way?

Scale plays a significant part of my process when putting together an idea. I always tend to want to paint big, but time usually plays a big part of scaling down pieces to a bit more manageable  size, and in retrospect most of the pieces lend well to what size they end up being. 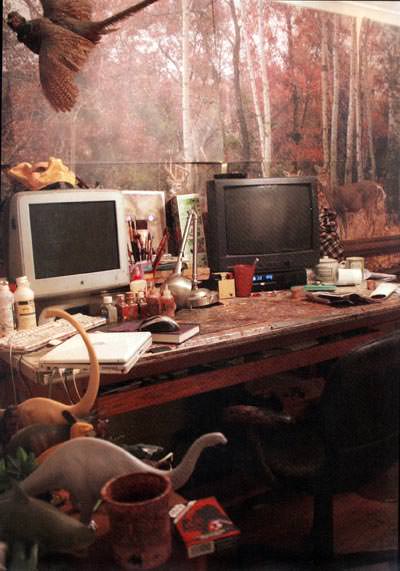 Do you and Jen take your pugs with you when you travel?

Oh I wish we could, but they’re crazy, I can’t even take them out at times other dogs are walking, they just lose their minds. 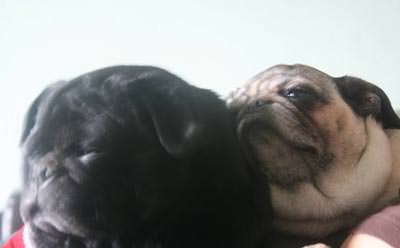 Matt shows his work internationally and currently lives in Pasadena with his wife Jen and two pugs. See more of his work in Hi-Fructose Vol.12 out this July.