Daniel Danger‘s work is simply stunning. His painterly use of print making as a medium elevates the reproductive process as an art form to the umteenth degree by exploiting every bit of its qualities to the its full extent. But don’t let me get you caught up in the process. It’s the mood and character of the work that is completely engulfing. The calculated use of color or sometimes purposeful lack thereof, grabs you and places you right into the work, right into the lonely street at twilight where shadows encroach and no one around for miles to hear your muffled cry…but I digress. As Mr. Danger prepared for his show “Watcher in the Woods,” with Dan Mccarthy at Gallery1988 S.F., Saturday April 4th at 7p.m., he took a little time for an interview and to show us some upcoming work. Be sure to check out his process blog post here.

How’d did the show come about and did you and Dan know each other before this? 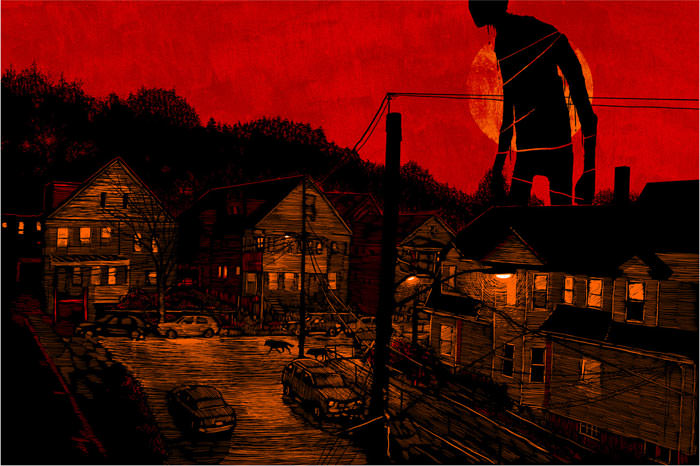 “I didn’t hear you arrive, I didn’t hear you go”.
Weirdly, despite living within an hour of each other and having very similar mindsets with regards to our aesthetic and our enviroments and our work, we’ve never actually met. We talk back and forth alot in the way people do on the internet, but somehow our paths never seemed to cross. Maybe it’s something about Massachusetts as a state that bred us that way independently of each other. As for the show coming about, I think it just made sense really. I hooked up with G1988 through the Stan Lee tribute show I was a part of last year where my “Doctor Strange” print was sort of a sleeper hit. They got introduced to my work and my following and thought their venue would be a great place to showcase it, so we booked some dates and here we are. Speaking of hits, Stan Lee punched me in the shoulder at that show. I still dont know why. 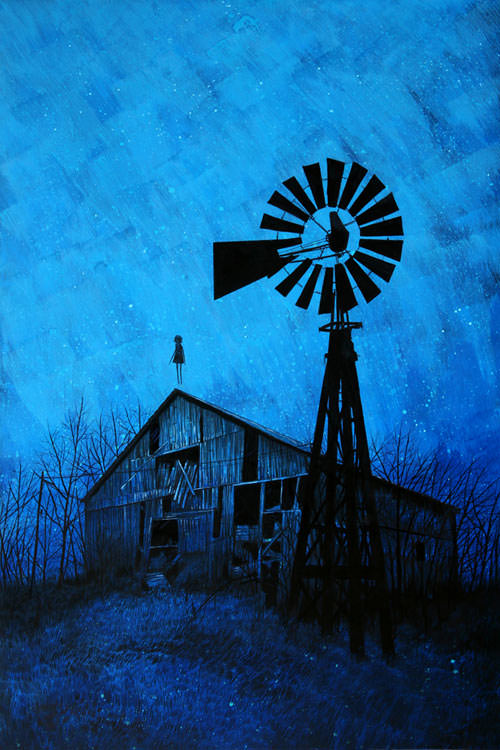 “regardless of everything, i came to see you as a relic”
Your bio intrigues me, especially where it mentions teenage years in hotel rooms and parking lost so I hope you don’t mind that I ask about that. Do you mind talking about it? 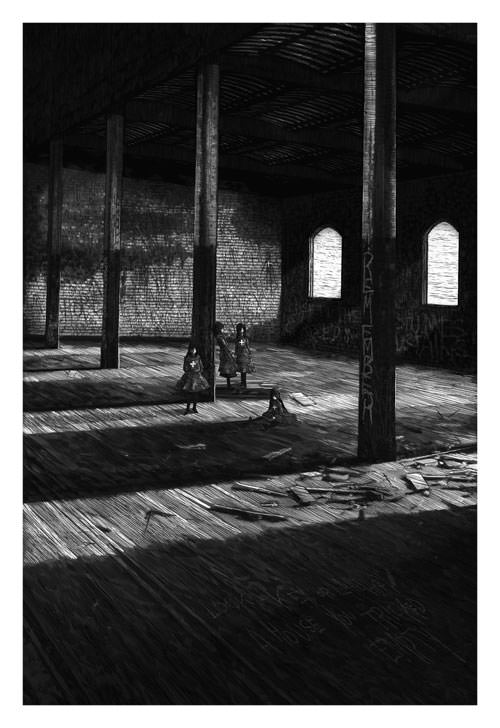 “lock and key or latchkey, a house you tricked empty”
My parents are the travelling artist types. My mother has been a professional potter for like 35 years or something, and half of my parents house is a pottery studio. Four huge kilns, clay on everything, the whole nine yards. My father is one of those guys who just sort of does everything well; totem pole carving, sculptures of fish, photography, framing, watercolor paintings, woodworking and furniture building, driving a tractor, watching bonanza on tvland. Anyways, most of my childhood involved me and my brothers getting woken up at 3am on a Friday morning, getting loaded into a van filled with boxes, driving to some arts festival in some random place on the east coast 5 hours away, and spending the weekend playing with Legos on a blanket behind the tent or building while my parents sold their wares. Accordingly, I slept in alot of parking lots and pup tents and hotel closets and fields in Vermont. One time I broke into Lyle Lovett’s trailer and slept there. As I got older, I started working for the promoter of the shows doing alot of human traffic cone jobs, stamping hands, parking lot duties; which I did seasonally for over 10 years. It was a very close knit community of tons of artists and crafters, and obviously I learned a little bit of everything from each of them. As weird as that sounds, I honestly couldnt have asked for a better way to grow up.

What were you doing in the woods? How does it tie into the body of work for this upcoming show? 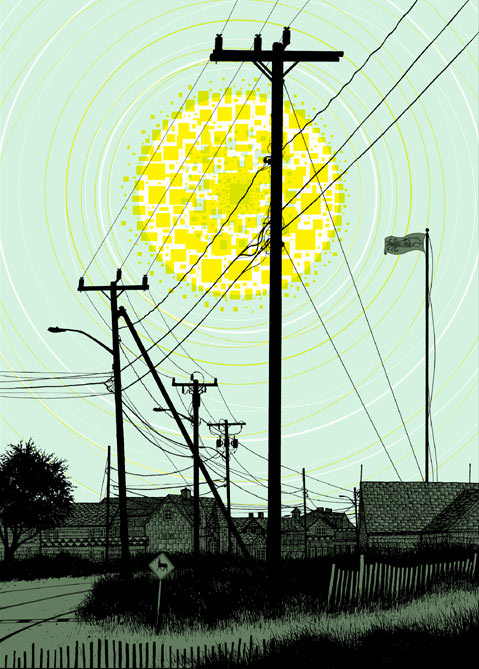 Dan Mccarthy’s – “woods hole”
I grew up in the woods, they’re just sort of build into my brain from birth. Like people from the city who cant sleep unless theres a taxi honking wildly at a crazed woman fighting a shopping cart below their window.That sort of deal. I’m sure the same goes for Mccarthy, you draw what surrounds you and what you know. Massachusetts is a very natural old-growth sort of rural enviroment thats pretty unique in how it allows citys to fold into them. Nobody hangs powerlines like how Massachusetts hangs powerlines. nobody builds a lazy suburb road like how Massachusetts builds a lazy suburb road. Plus, have you ever really looked at a tree? They’re sort of mindblowing.

When you say documentation is key to get through the day do you mean in a daily journal sense or do you have a very bad memory? 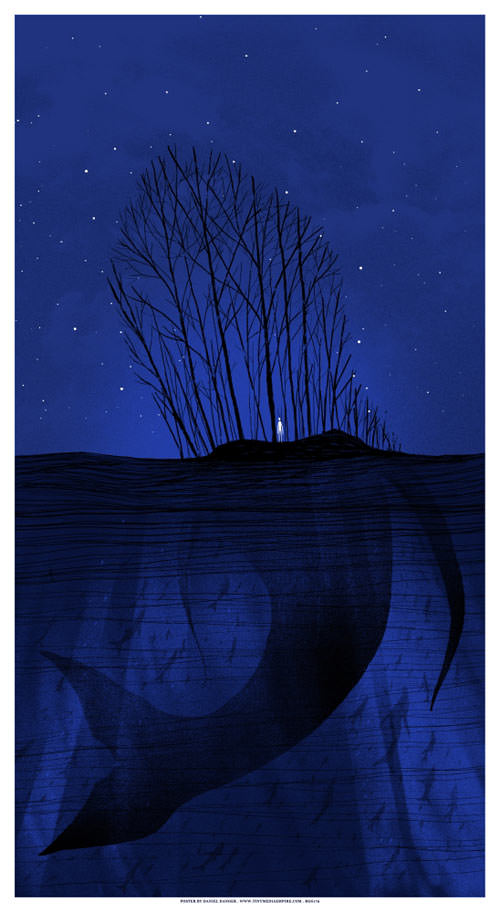 “so how can we hope to float?”
I have a phenomenally selective and bad memory. If you asked me what I had for breakfast today, it might take me a few minutes. If you asked what movie I saw yesterday, I might not remember. If you asked me what color hoodie my friend was wearing in October 1997 in Stowe Vermont while on the bike path, I’d could tell you (a blue champion olympics zipup). If you asked me what was on the side of the delivery truck parked at her memorial service 6 years later, I could tell you. And basically thats what I try to address in my work, especially the titles. Documenting in some form the relation between moments like those. The things people remember being said to them or things they said, but right at that hazy moment of recollection where the specifics arent clear.

Can you briefly take me through your process before you gets to the print making stage? 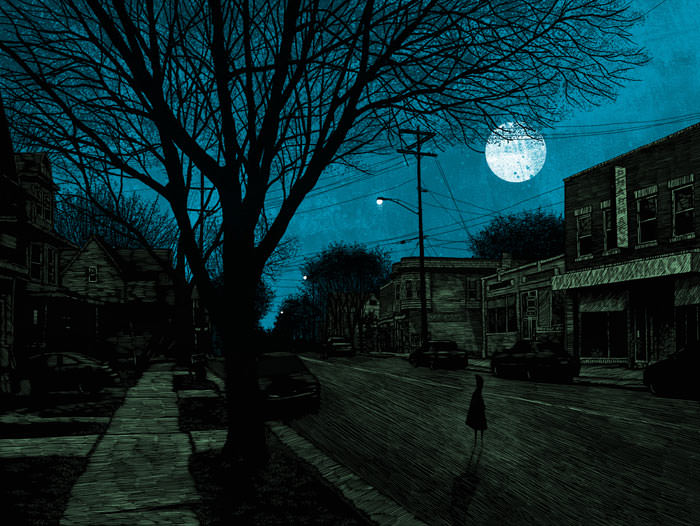 “and i dont even like to be seen in the parking lot between the movies and the drink and the glass, whatever the hell that means.
Oh my process is never consistent. Sort of makes things interesting. I sort of draw whatevers running through my brain that day, come up with a loose concept and sketches, start blocking out shapes and hatching away, things get more detailed over time. It’s all sort of painfully dull in real-time to be honest. It’s all print-separation nerdery thats really only interesting to me. Usually where I start and where I end up are completely different and unexpected. Somewhere in that process a title starts generating in my head and I try not to overthink it much, and the next thing I know its 6am and maybe im done. The only constant is Fritos and Coca-Cola and at least a full season of some tv show on DVD.

You have an impressive collection of work trailing behind you. What was the first band illustration/print you ever did? 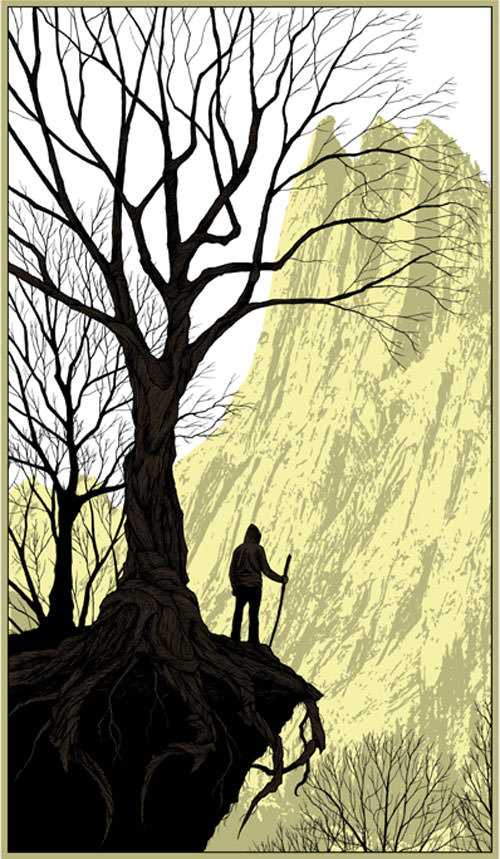 Dan Mccarthy – ”it felt good to be lost”
Well, like alot of people I got started doing this stuff because I was doing artwork for my own bands or my friends bands. We needed a flyer? Everyone looked at me. We needed a tshirt design? Everyone looked at me and I enjoyed it, so obviously I wanted to keep doing it. The first screenprinted poster I did was for built to spill, and it was sort of a mess but charming none the less. The first big art print I did was based off an album cover for this band called Funeral Diner, who were goddamned fantastic.

I’m sucker for riddles and I must know the name of your cat. Named after internet slang…or can you give me a hint? 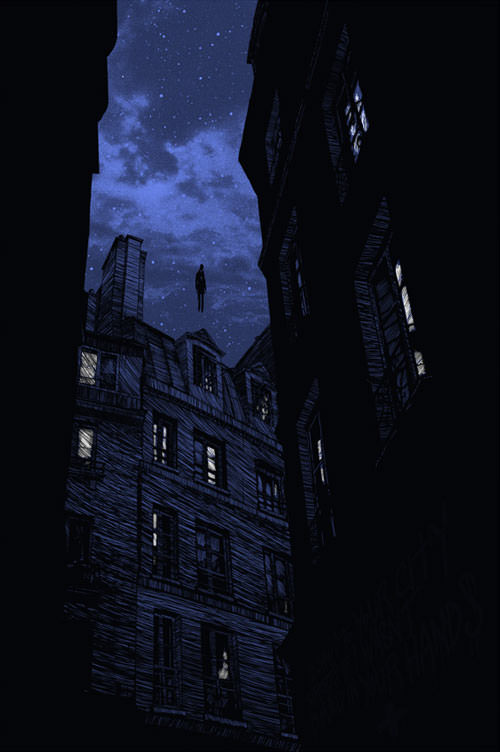 “I’d sink to your city streets if I wasnt buried in your hands”
My cat’s name is OMG. (No way!)

Specifically OMGKitty. Also sometimes refered to as Tanker, or Romples, or Thunderpaws, or Red Skull; All totally depending on my mood. 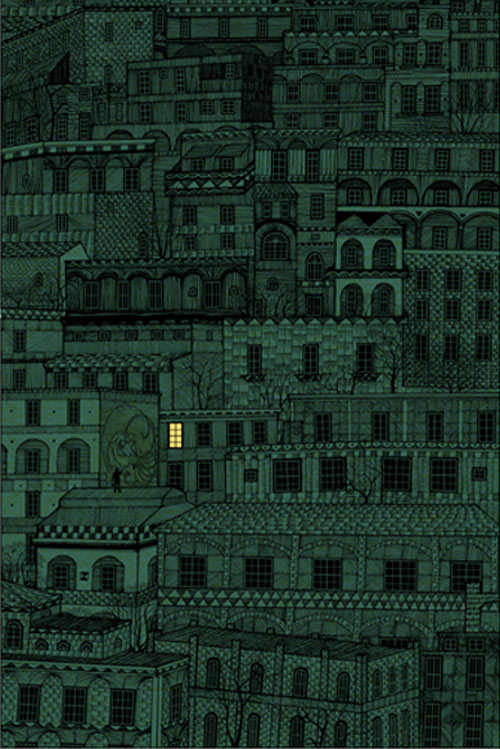 Dan Mccarthy – ”while you were sleeping” 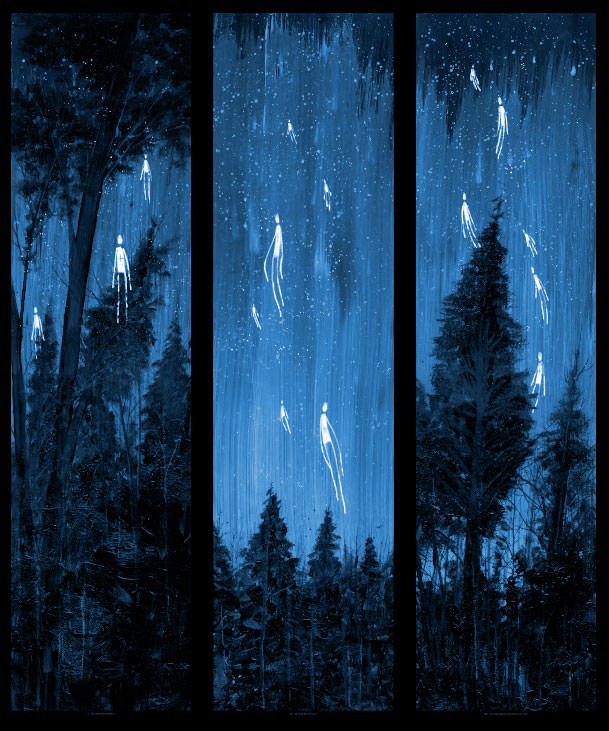 “I. We were fortunate. II. There were no cameras, no helicopters, no sirens for our return. III. So with a quiet kiss and a single step we had given ourselves to this place.” 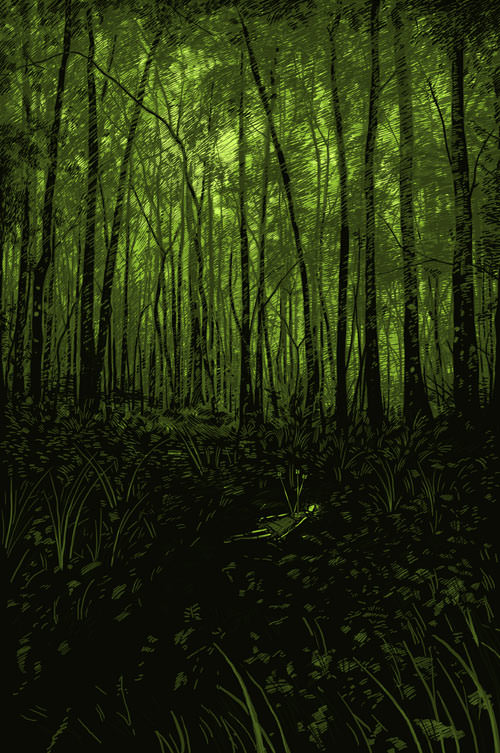 “everything still exists, you need to keep moving” 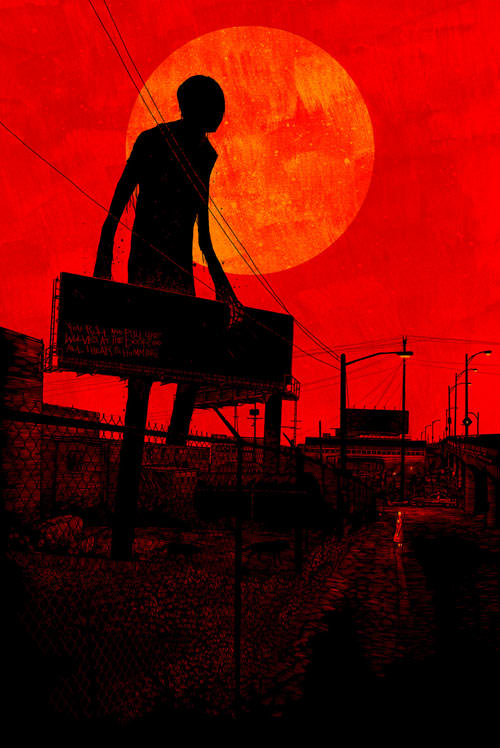 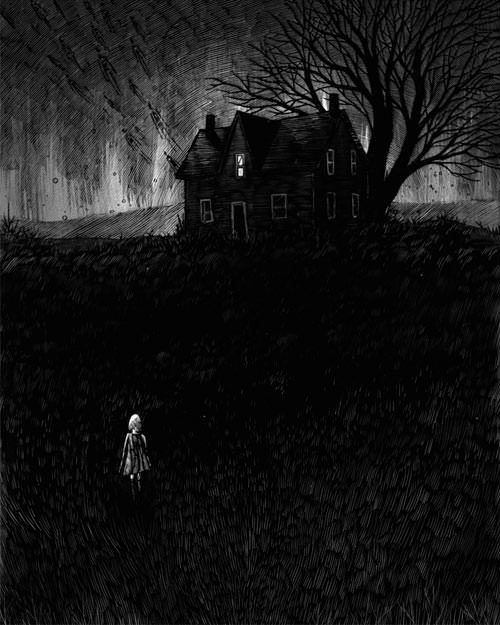 “I was born in a house of Wyeth” 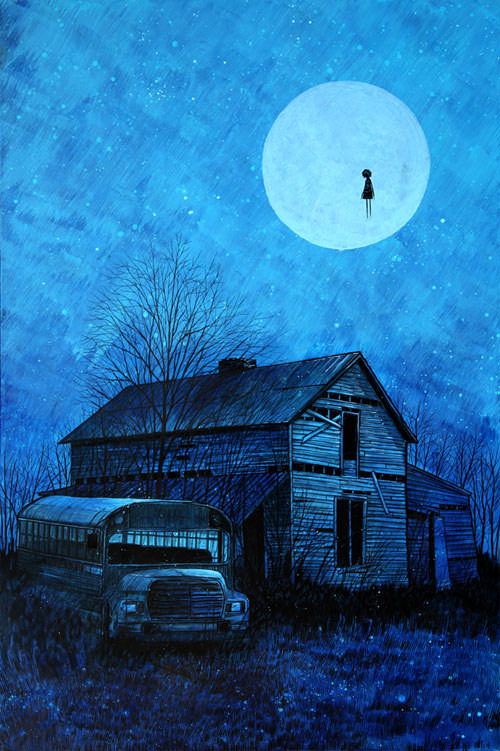 “wood skeletons placed in foundations, we were never of the nature to keep moving”